Michael DiSpezio Author, ScienceFusion and HMH Science Dimensions Programs
The final version of the long-awaited Next Generation Science Standards was released in 2013. Known by its acronym NGSS, this document offers up a national vision for the tenets of effective science education in the 21st century.

So what is NGSS? First off, NGSS is neither a curriculum nor highly prescriptive classroom cookbook. Instead, the document offers a higher level view on best practices, effective teaching strategies, cross cutting concepts and appropriate content for each grade range.

At its heart lie the Three Dimensions of Science. This hallmark term was coined by the National Research Council (NRC). This mega think-tank of researchers and educational policy makers scripted these dimensions as the scaffolding upon which those in the trenches would base their day-to-day instruction. These dimensions were outlined in the 2012 document, A Framework for K-12 Science Education‬‬.

NGSS builds on the Framework, resulting in a more prescriptive approach to effective science teaching.  It offers a comprehensive and mostly grade-by-grade organization for primary and elementary levels. The result is a document intended as a pragmatic roadmap for instruction highlighting major pedagogical and content shifts. Two of the significant changes highlighted by NGSS include: 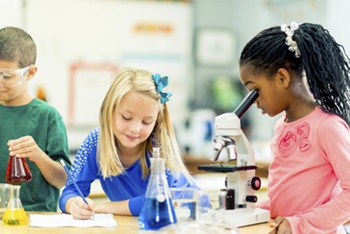 Science addresses understanding of the natural world. Scientists want to know why and how. In contrast, engineering is about solving real world problems or addressing a specified need. Scientists use an often linear approach to uncovering understanding called "the scientific method." It begins with a question from which emerges a hypothesis. This reasonable guess is tested by a valid experimental design. Data that is collected and analyzed is used to support or refute the hypothesis. Conclusions are made and communicated. For the most part, that's the scientific method.

The engineering design process is based upon a series of "feedback loops” in which progress towards achieving a solution is continually evaluated.  If the achievement meets defined criteria for success, the engineer moves on to the next step. If the criteria are not met, the engineer goes back and repeats the step employing a different approach. Through this critical analysis process, steps are continually evaluated with resulting improvements eventually producing the best possible design.

Now, back to those Three Dimensions of Science...

When it comes to science education, the past few decades have experienced few major shifts in pedagogy and content. Hang onto your space helmet, Buzz Lightyear, because things are about to change...and change dramatically.

Use these Black History Month science activities and experiments to teach students about notable scientists.

Take a deep dive into what formal and informal assessment are and how to use them in the classroom.