At this year’s Democratic National Convention, President Obama said, “We need to keep making our streets safer and our criminal justice system fairer, our homeland more secure, and our world more peaceful and sustainable for the next generation.”

In all political elections, promises are made by each party to pass, repeal and enforce laws and decisions that benefit not only current voters, but also the next generation of voters. Then, every Election Day, those who are 18 or older have the opportunity to vote for their candidate. But what about that next generation of voters who are also being addressed in those political promises?

Channel One News, a Houghton Mifflin Harcourt company, gave a platform to this next generation when it created OneVote, a student mock election that takes place in schools across the country and has accurately predicted the next US president since it began in 1992. To represent the millions of students participating in the mock election, Channel One News also introduced Team OneVote, a group of students selected from across the country who provide a personal look at how the election and political process is affecting them.

With the 2016 presidential election in full swing, Team OneVote 2016 has been announced, with eight members ranging in age from 13 to 18 who cover the political and geographic spectrum of the United States. Congratulations to Simone Chaddha, Phillip Godin, Alicia Huggins, Genevieve Jackson, Malcolm Rakshan, Brooke Reaves, Kai Sherwin and Elliot Smith. We look forward to hearing their thoughts leading up to November 8! 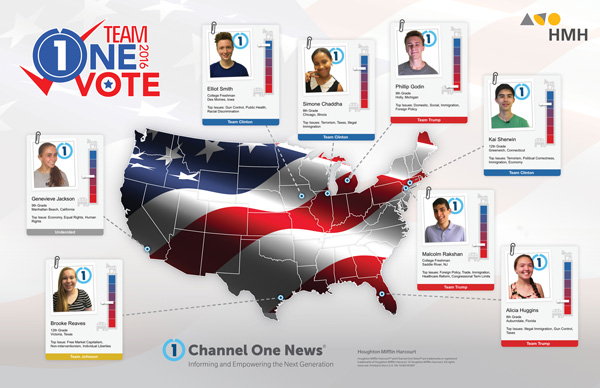 2023 State of the Union Activities and Lesson Plans

The President's big speech before Congress takes place on February 7. We’ve got you covered with our 2023 State of the Union activities and lesson plan ideas.

Use these World Kindness Day activities and ideas for the International Day for Tolerance to ensure that every day includes a little (or a lot of!) kindness in your school.