March is Women’s History Month and the perfect time to honor the hundreds of wonderful female authors published by Houghton Mifflin Harcourt. While we’re all probably familiar with the more popular names such as Virginia Woolf, Alice Walker, Willa Cather, Flannery O’Connor, Anne Sexton and Eudora Welty, I thought I would focus on some of the women who were bestselling authors and immensely popular in their time, but are largely forgotten today. 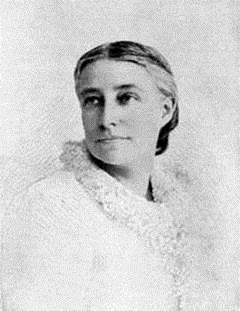 In 1895, The Bookman magazine began publishing annual bestseller lists, and in 1896 two HMH authors appeared on the list; one of whom was Elizabeth Stuart Phelps with her novel A Singular Life.

Phelps wrote 57 books of poetry, essays and fiction, most published by Houghton between the 1870s and her death in 1911.  Phelps was born in Andover, Massachusetts, and educated at Miss Abbot’s Academy (later absorbed into Phillips Andover). She lived among the Boston intellectual elite all her life.  She and John Greenleaf Whittier (also published by HMH) were great friends, and it may be through him that she was brought into the HMH family.

Phelps believed passionately in several causes, writing about them in both her fiction and non-fiction titles.  Her 1877 novel The Story of Avis was controversial for its unfavorable portrayal of marriage as constraining for women. She herself didn’t marry until she was 44 years old, and then she married a man 17 years younger.  Another of Phelps’ causes was women’s clothing reform, writing in 1873 in her essay What to Wear: “Burn up the corsets! … you will never need whalebones again. Make a bonfire of the cruel steels that have lorded it over your thorax and abdomens for so many years and heave a sigh of relief, for your emancipation I assure you, from this moment has begun. 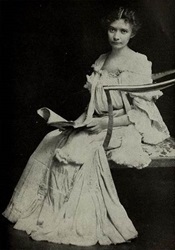 Another bestselling author from the turn of the 20th century was Mary Johnston. 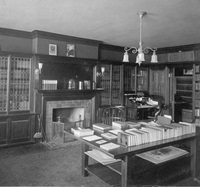 Like Phelps, Johnston was also an advocate for women’s rights.  She wrote historical fiction that often involved romance and politics down South during colonial times. To Have and to Hold was first serialized in The Atlantic Monthly, which was owned by Houghton Mifflin at the time. The serial was then published in 1900 as a book and that year became the number one best-selling novel in the United States. Her next book, Audrey was also a bestseller. To the right is a picture of the Houghton Mifflin office at the time of Audrey’s popularity and under the table you’ll see a poster being prepared to advertise the book.

Johnston’s 1911 book The Long Roll became something of scandal, and that certainly helped it become another bestseller.  In the novel, she fictionalized the story of Stonewall Jackson and in response, Jackson’s widow published an article in the New York Times condemning Johnston for her portrayal of her late husband.

Mary Roberts Rinehart, who is often referred to as “America’s Agatha Christie”, wrote hundreds of books and stories during her long lifetime (1876-1958) including the best-selling title K, published by Houghton Mifflin in 1918.

Another connection between Rinehart and HMH involves her son, Stanley. Stanley founded the publishing company Farrar & Rinehart in 1929. After John Farrar left, Rinehart & Company continued on until it merged with the firms Holt and Winston in 1960. In 1985, Holt and Winston  sold their educational division to Harcourt Brace Jovanovich.

Finally, there is Helen MacInness.

MacInness wrote 22 books which sold over 25 million copies just in the United States.  Her books are Cold War espionage thrillers, with titles like North from Rome, The Venetian Affair and Ride a Pale Horse, which was her last book, published in 1984, and the only one with a female lead.  MacInness was Scottish and was working as a librarian in Glasgow when she met her husband, a classics scholar.  He was also an intelligence officer with Britain’s MI6 in the thirties and forties until they moved to New York City where he became a professor at Columbia.  Some critics argue that he must have remained a British spy after the move because MacInness’s titles held so much detail that her husband must have influenced them. Several of her books were turned into movies, including The Salzburg Connection.

These are only some of the many wonderful women writers HMH has published over the years. In honor of Women’s History Month, I encourage you to borrow one of these fantastic titles from your local library and let me know what you think!

Science of Reading: Sound Walls in the Classroom

Based in the science of reading, sound walls in the classroom help educators reinforce the importance of explicitly teaching the skills of letter-sound correspondence.

Teaching middle school writing can help students learn the value of their words.