I had no idea it would make me feel so big and so small at the same time! HMH employee, viewing the solar eclipse

This is how one HMH employee reacted to viewing this week’s “Great American Eclipse” with a group of colleagues in Orlando. Invited to an eclipse viewing event by Eric Hoin and Alexa Dowlen, two HMH employees who are longtime friends and astronomy buffs, a group of 300 colleagues and their family members enjoyed a one-of-a-kind, hands-on science lesson. With the help of Eric’s handmade, human-sized telescope outfitted with a special filter for viewing the sun, attendees had an up-close-and-personal encounter with the eclipse.

Eric, a 29-year HMH employee with a lifetime passion for astronomy, has been involved at the Orlando Science Center since 1991. Eric belonged to a group of astronomers who built the Robinson Observatory at The University of Central Florida and installed its 28- inch Tinsley Telescope, a four-year project. Alexa is a math/science learning architect for HMH, and met Eric in 1994 when her office was in the same building as the Science Center.

The Spark spoke with Eric and Alexa about what inspired them to plan the event.

The Spark: What first sparked your interest in astronomy and your love of sharing it?

EH: “I was always interested in the sciences. Although there was no formal astronomy program in school, I remember figuring out the phases of the moon on my own. When I was in elementary school, a friend was trying to make a telescope with a mirror and a mailing tube—I helped him figure that out. Astronomy concepts come easy to me, and I really enjoy explaining them so people can understand things.”

AD: “As the HMH mission states, we are here to help create lifelong learners, so today we can extend that to our colleagues. It’s great to watch people react.”

I find that events like this reenergize us and remind us why we are making content for kids. Alexa Dowlen

The Spark: Why has the media been calling this “the eclipse of the century”?

EH: “Solar eclipses happen about every six months, but most of them happen over water. That’s why this one is special for us—the path of totality traversed the U.S. The big deal is that it was coming to us in ‘prime time.’” 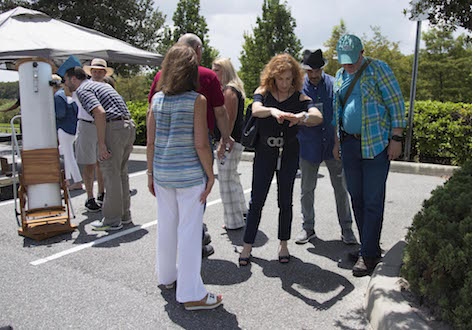 The Spark: Would you describe how the day unfolded?

AD: “It was a spectacular event. We had a tent set up, and Eric set up his telescope early. The moon started to block out the sun at 1:20 Eastern here. We had solar glasses, but several people also brought alternative viewing options. The pinhole viewers and colander were huge hits with everyone.”

EH: “We started planning in May, so luckily we were able to have plenty of glasses on hand. We were expecting about 200 colleagues, but had closer to 300 on site during the peak coverage of about 85% at 2:51. At one point there were 45 people in line to view the happenings through the telescope.”

The Spark: What other effects did you observe, and how did the crowd react? 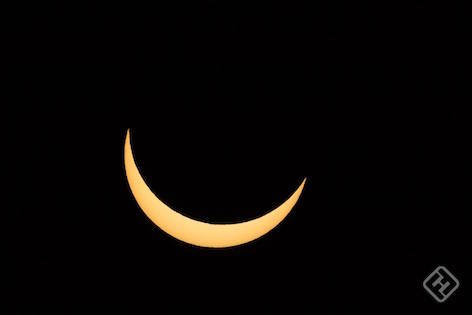 Some of the reactions I heard from colleagues include:

‘Things like this make HMH a cool place to work.’

‘I’ve never liked science, because I don’t think I really understand it. But I appreciate this, and can see why it is so amazing, even though I don’t know how it works.’

And for a brief shining moment, nothing else mattered. We were all just a blip in time, on a small celestial body, within the infinite universe bonding over something we will never experience again. It was revitalizing and invigorating. It was the sensation we try to replicate in our products, to make lifelong learners out of our students. Alexa Dowlen

Celebrating Famous Women in Science Who Have Impacted the World

Download these posters to teach students about women in science who have contributed to fields ranging from engineering to astronomy to chemistry.

Try these fun 2023 Groundhog Day activities for elementary students in your classroom.