World Language teachers know culture is a critical key to second language acquisition. It’s the foundation on which a deeper understanding of language is built and the context for learning to communicate effectively and authentically—with confidence. It’s also a great motivator. For example, engaging students learning Spanish with authentic cultural content connects them to the Spanish-speaking world and inspires them to use the language.

Providing ample opportunities to make authentic connections to culture can also be a challenge within the walls of a classroom. How do you keep the culture alive and present?

Take some time each month to explore the popular holidays observed in the different Spanish-speaking countries. Throughout the year, these windows into the diverse cultures provide opportunities for students to explore and to share what they’ve learned using their growing language skills. You can also use them to spark discussion, especially if you have students who come from those Spanish-speaking countries.

Begin this fall with the following October holidays and sample some of the activities included in HMH’s new Fall Spanish Holiday Calendar, which includes ideas for all levels. 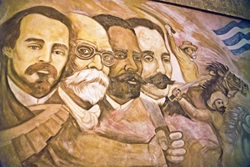 This day marks the initiation of Cuba’s independence from Spain. On October 10 in 1868, Cuban lawyer and planter, Carlos Manual de Céspedes, initiated an uprising by delivering a declaration of Cuban independence (Grito de Yara or Cry of Yara). He, along with other planters, freed their slaves who joined in the fight. This was the beginning of the Ten Years’ War, an uprising that did not succeed in ending Spanish control but initiated the long struggle that eventually led to the end of colonial rule.

Activity: Have intermediate and advanced students research The Ten Years’ War and then practice using the preterite tense to state when the war started and ended and the imperfect tense to state things that occurred continuously over the course of ten years. 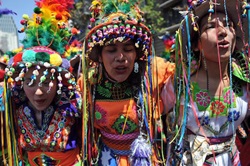 The day Christopher Columbus landed in the New World is recognized throughout the Americas, but the focus of the holiday differs depending on the region and the country. In the United States, Columbus Day is a federal holiday that commemorates Columbus’s arrival.

In many Spanish-speaking countries in Latin America, the Columbus landing is observed as Día de la Raza (Day of Race), a holiday that focuses more on celebrating the indigenous cultures, traditions, and the rich ethnic and cultural diversity of Latin American countries.

In Spain, Día de la Hispanidad (Hispanic Day) celebrates the country’s contribution to the discovery of the Americas.

Activity: Have students conduct online research into the different ways the Columbus landing is viewed throughout the world. Intermediate or advanced student can use “si” clauses to share how they might feel about Columbus landings if they had indigenous roots. 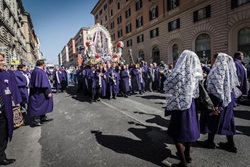 Every October, people gather in the streets of Lima to take part in a religious procession honoring a venerated image of Jesus. Painted in the 17th century on a large mud wall by an Angolan slave, the image is celebrated for its miraculous survival through three earthquakes in 1655, 1687, and 1746. On four different days, a large replica of the image is carried in processions through the neighborhoods of Lima. Thousands of devotees wearing purple gather for the festival, and celebrate with song, incense, flowers, and confetti. Streets decorated in purple are filled with vendors offering traditional dishes and sweets. Also during the Mes Morado (purple month), Lima hosts a bullfight commemorating Señor de los Milagros (The Lord of Miracles).

Activity: Give beginner and intermediate students practice in saying the years in Spanish by making a timeline of important events in the history of Señor de los Milagros, and practice saying the different years on the timeline aloud.

Want more holiday inspiration for the classroom? Check out El Profe, our new biannual newsletter for Spanish language educators, from which you can download the fall holiday calendar.

Does Singapore Pedagogy Work in the United States?

A Guide to Engaging, Effective Instruction in Phonics, Spelling, and Vocabulary