Today is National Pet Day, a day to celebrate the bond between humans and their animals and all the ways this relationship enriches our lives. Many writers have used their talents to elaborate upon their love of their furry friends, so today I want to highlight a few select HMH authors who were dog people, cat people, bird people and everything in between!

It’s probably no surprise that Rachel Carson, seen below as a child reading to her dog, would be an animal lover. Her life’s work was about protecting the natural world and she is remembered and honored for halting the spread of DDT and other insecticides that were harming Earth and its inhabitants. Though she had dogs as a child, she favored cats in adulthood. Also below is a picture of her and one of her feline friends doing what they do best: interrupting work. 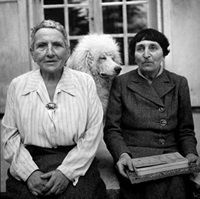 Gertrude Stein was a dog lover, and felt that her dog enhanced her understanding of her work. She and her partner Alice B. Toklas owned a white Standard Poodle named Basket. When Basket died Gertrude and Alice adopted another and named him Basket II.

Toklas said, "Basket, a large, unwieldy white poodle, still will get up on Gertrude's lap and stay there. She (Gertrude) says that listening to the rhythm of his water drinking made her recognize the difference between sentences and paragraphs; that paragraphs are emotional and sentences are not."

Animals were a great influence on Virginia Woolf’s life and work. She and those closest to her often used animal names for one another: Virginia was known as Goat, her sister, Vanessa Bell, as Dolphin, and her husband, Leonard, as Mongoose. Woolf once confided in her diary that she bought a “beautiful cat, a Persian” with the first money she earned with her writing. Alas, there is no picture of that cat available, but there are several photographs of Woolf with her dogs.

In 1933, Woolf wrote Flush, a biography of poet Elizabeth Barrett Browning’s dog. Woolf had intended the book to be a joke, poking fun at her good friend Lytton Strachey (the biographer and HMH author) and she was embarrassed by its success. 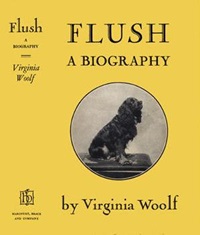 Of course, while cats and dogs are the most common among household pets, there are those who prefer other kinds of animals. Flannery O’Connor loved all fowl, beginning with chickens when she was five years old. In 1961, she wrote an essay called “Living with a Peacock” that describes how she taught two chickens to walk backwards when she was a child. Later, she also adopted ducks and peacocks.

I don’t want to give you the impression that it was only women authors who loved and kept pets, however. Men loved their pets just as much and also sometimes chose non-traditional ones. At left is Carl Sandburg with his goats.

Jack Kerouac was cat person and said of his cat Tyke “I loved Tyke with all my heart, he was my baby who as a kitten just slept in the palm of my hand and with his little head hanging down, or just purring for hours, just as long as I held him … he had complete confidence in me.”

Henry Wadsworth Longfellow and his family owned many pets, but he wrote that the “last and the greatest of all the dogs was Trap; Trap the Scotch Terrier, Trap the polite, the elegant.”

While living on Scotland’s Isle of Jura and working on his famed Nineteen Eighty-Four, George Orwell kept company with a pet dog and cat, in addition to the livestock kept on his farm. (I love that he is feeding the goat while wearing a suit jacket.)

I hope you have a wonderful and cozy National Pet Day with whatever animal you share your life. If you happen to be pet-less, may I recommend a good book about a beloved pet instead. 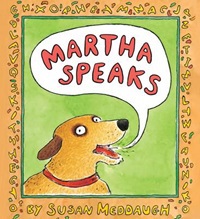 Try these fall activities for elementary students in your classroom that put a twist on common fall themes.