Many teachers feel they are always struggling when it comes to teaching vocabulary. “So many words, so little time!” is a common lament. Added to that pressure is their awareness that teaching vocabulary is critically important, because the vocabulary foundation we build for our students will underlie the ways they see and understand their world and their learning for the rest of their lives. The encouraging news is that the daunting task of vocabulary instruction can be made efficient and effective through:

First, all of those words: Of course, there’s not enough time to teach them all directly, so we must choose wisely. A number of researchers and educators have offered valuable guidelines for these choices (for example, Biemiller, 2010; Hiebert, 2005; Templeton & Gehsmann, 2014). To illustrate, let’s see how these guidelines work when applied to selections at the primary and intermediate levels: 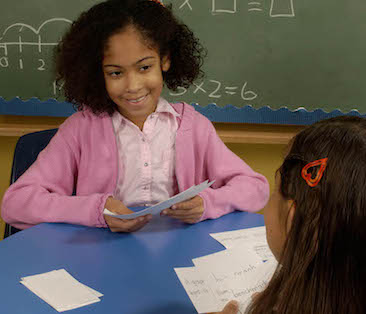 Primary Level: In the informational text From Seed to Plant by Gail Gibbons, quite a few new words occur, among them: grain, pistil, stamens, root, nutrition, and pollination. We select grain, root, and nutrition as target vocabulary words—they will receive direct and sustained instruction. We select them because 1) they occur with greater frequency in texts than the other new words and therefore children should be familiar with them; 2) unlike pistil, stamens, and pollination, which occur primarily in science texts, our target words are general academic/Tier 2 words, occurring across several different content domains. Children’s understanding of the target words will need to grow to include the ways these words are used in those different domains. In Social Studies, for example, root is often used to mean the underlying cause of something, and grain may refer to the smallest amount of something in both Social Studies and literary texts. It’s also important to note that the words we did not select for direct and sustained instruction are adequately explained in the selection: Pistil and stamens are labeled in an illustration of the parts of a flower and explained in the text, and pollination is defined and explained well in context.

Intermediate Level: In the myth “Theseus and the Minotaur” (Journeys, 2017), some of the new words students encounter are mean-spirited, labyrinth, unfortunate, and resourceful. The teacher may explain mean-spirited quickly—a technique called “fast-mapping” in which a brief definition is provided, supported by the context in which the word occurs (Carey, 1978; Biemiller, 2010). Labyrinth is defined well in context. Unfortunate and resourceful occur with greater frequency in texts and across all content domains, so they warrant direct and sustained instruction. They also provide excellent opportunities to reinforce teachers’ morphological instruction—teaching about prefixes, suffixes, bases, and roots—so their value extends well beyond their specific meanings.

Once target vocabulary words are selected, there are productive and motivating activities and strategies that support word-specific vocabulary instruction (Templeton & Gehsmann, 2014). For example:

Using a variety of these activities ensures you are providing students multiple perspectives through which they may learn, explore, and extend understanding of the target vocabulary words.

Morphology: The Bedrock for Generative Instruction

Flowing throughout many of these activities and strategies is morphology, the structural bedrock for generative instruction—learning how prefixes, suffixes, and base words combine to form the majority of words in the English language. In “Theseus and the Minotaur,” for example, unfortunate is examined to reveal fortunate and the effect that adding the prefix un- has on the meaning of fortunate. The suffix -ate is removed to reveal fortune. Morphology often affords the blending of etymology, or word histories, into instruction. In Roman mythology, Fortuna was the goddess of fortune. Our other example target word in “Theseus and the Minotaur”—resourceful—is examined to reveal the root word source. A resource is a source that may be drawn upon again and again (“again” is the most common meaning of re-), and someone who is resourceful is “full of” the ability to use resources.

In the intermediate grades and beyond, morphology instruction extends to the combination of prefixes, suffixes, and Greek and Latin word roots. For example, students explore how the Latin root struct, meaning “build,” combines with the affixes con-, re-, -ion, -ive, and so forth:

Each word root that is learned generates students’ learning of many, many other words that contain that root. Understanding these processes of word formation teaches students how to look at words more generally—providing the key to unlocking the meaning of literally thousands of words that they will encounter (Templeton, 2011/2012, 2012).

To illustrate the potential of this generative learning, let’s consider how Sophia, a 5th-grader, figures out the meaning of the word decathlon in the following sentence:
Gerry had trained for years before he attempted to compete in the decathlon.

The letters athl remind Sophia of athlete and athletic, and she thinks that the letters dec may represent a Latin root that she has learned, meaning “ten,” as in decade and decimal. When she puts these parts together, she concludes that a decathlon is an athletic competition with ten events. When Sophia reads further, she realizes from the context that this is the correct meaning. She doesn’t need to check the word in the dictionary, only if she wishes to, for example, to find out which ten events are a part of a decathlon.

Perhaps most important, the efficient and effective vocabulary instruction described here can lead to students developing a word consciousness, which educators describe as inspiring a curiosity about and appreciation for words—a powerful foundation for robust vocabulary growth (Stahl & Nagy, 2006). This is the type of sensitivity to words that underlies the deep reading of texts, the awareness and understanding of author’s craft in writing, and the foundation of critical thinking.

This article originally appeared in the Teaching with Journeys newsletter.

Missed attending ILA? Watch Shane Templeton’s interview with HMH on Facebook Live. He will also be a part of the Lead the Way to Literacy Fall Series.

8 Tips for Introducing Notice & Note Signposts in Your Classroom

Incorporate Notice & Note Signposts into your reading or ELA curriculum with these strategies and tips for teachers.

Teaching Students How to Write an Expository Paragraph

Want to help your students develop their organizational, analytical, and research skills? Teach them how to write an expository paragraph.