When my friend and colleague Ted Hasselbring, author of READ 180 and professor of special education at Vanderbilt University, asked me to join a group on a wilderness fly-fishing adventure over the summer, I couldn’t resist. The trip involved a 30-mile horseback ride into the Bob Marshall Wilderness in Montana, eight days of camping, and lots of fly-fishing. I would be a novice at everything and completely out of my comfort zones. I learned a lot about myself and about being a struggling learner. Here’s one of the lessons.

When I told my wife that I had agreed to go on this trip with Ted, she reminded me, “Did you tell them you’re jinxed? You need to tell them.” It’s true that when it came to any kind of fishing, I didn’t have a very good track record. My father took my brother and me fishing when we were kids. He didn’t know what he was doing, and we never caught anything. In college, I went fishing with a couple of buddies, one of whom we thought knew how to fish. After two days of nothing, we hired a guide. We caught fish like crazy. Well, my friends and the guide caught fish like crazy. I kept getting my hook caught on rocks.

Years later, on a family trip to Hawaii, I hired a boat to take us deep-sea fishing in the hope of fulfilling some childhood American Sportsman fantasy. When we returned from a day on the ocean, the guide said he had never had a day when he didn’t even get a nibble. A day fishing with me was his first and only shut out. Maybe, when it came to fishing, I was jinxed. 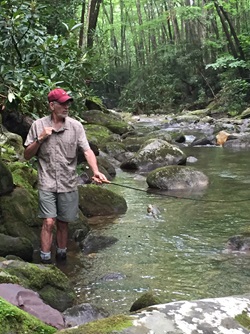 A couple of weeks before I was set to fly to Montana and begin my trip, I found myself in western North Carolina with a free half day. I visited a local fly-fishing shop and asked if someone could take me out for a fly-fishing lesson. I explained that I had gotten a weekend introduction to fly-fishing from my friend Ted, but other than that I was a complete novice. I just wanted a little real experience before spending eight days “enjoying” something I’d never done before. You see fly-fishing isn’t like any other fishing I’d attempted. You don’t just put a worm on a hook and toss the line into the water. Fly-fishing is a real mix of strategy and skill. You have to learn to think like a fish. “Where can I hang out where I’m protected from predators and with easy access to a constant supply of food?” And “what do I feel like eating now?” Thinking like a fish helps you find the fish and figure out what fly to tie onto to the end of your line to attract them to take the hook.  Then you have to have the skill to cast your line in the right place, with the right amount of tension, and you have to be able to set the hook when a fish finally bites. I lacked both the knowledge and skills. With so much to learn, I figured a little head start couldn’t hurt.

The next morning I met Shane, my guide, and headed into the North Carolina woods for some fishing. Four hours later I had learned how to bow and arrow cast with a Tenkara rod and locate likely places to find fish. I had not, however, caught a single fish. I had missed several. After I had failed to set the hook on a big brown trout, the fish jumped out of the water, paused in mid-air, looked straight at me, laughed, and plunged back into the river. At least that how it felt to me.

Defeated, I started looking at my watch. Wasn’t it time to head back? Shane was working so hard to get me a fish, I felt badly for him. I just wanted it to end. I told Shane about a story a teacher in Texas had told me. The teacher was helping a special education student prepare for the state test. It wasn’t going well. The student reached over to the teacher, patted her arm, and said, “It’s okay, I never pass these tests.” That’s exactly how I felt. “It’s okay, Shane, I never catch any fish. I’m jinxed.” 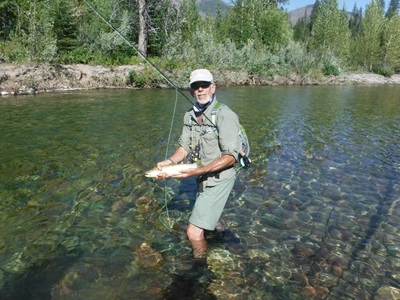 Shane refused to accept the jinx. He believed in me, even though I had stopped believing in myself. We spent another hour fishing. I still came up empty. But he continued to reject my failure. “You are not jinxed,” he affirmed. He pointed to two skills I needed to work on. He thought I got too easily distracted. My eyes would wander, and I would miss seeing an approaching fish. And I needed to practice setting the hook, the quick, time-sensitive motion that gets a nibbling fish on the hook before it realizes that the “fly” isn’t real.

Without Shane’s unwavering faith in me, I likely would have left North Carolina and headed to Montana filled with dread and firmly fixed in my belief that fishing just wasn’t for me. Instead, though, my failure with Shane left me with steps forward and a very small ray of hope.

Fortunately, Ted and the friends he brought with him on this Montana adventure also had faith in me. It’s a good thing we were out there for eight days. A weekend would not have been enough for me to have sufficient success to gain the confidence in myself as a fly-fisherman.  It took most of the week, with lots of support, guidance, and cheering, for me to feel that I could go out and fish on my own.

When I returned from the wilderness, I texted Shane a picture of me with my best catch on our last day of fishing. His return text confirmed my new mindset.

My fishing jinx was a fixed mindset just waiting to explode. Each of my failures could easily have strengthened that sense of inevitable fishing incompetence. I felt like so many of the students I have encountered in my intervention work. For me it was just fishing. For those students it’s been math, reading, writing, and just about anything academic. I got only a small taste of the frustration and incapacity some of them feel day in and day out. But I also got a taste of the lovely flavor of breaking the jinx, of finally getting success at something you never felt you could do.

So here are three of the many takeaways from my summer learning experience.

It’s good to remind ourselves sometimes what it’s like to be over our heads trying to learn something difficult. I have more stories and lessons to share, and I can’t wait for my next learning challenge.

What Is a Multi-Tiered System of Support (MTSS) in Education?

Here we answer the question "What is a Multi-Tiered System of Support (MTSS)?"