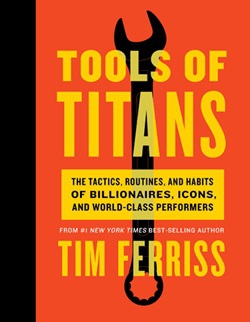 NEW YORK – Houghton Mifflin Harcourt (HMH) announced today that Tools of  Titans:  The Tactics, Routines, and Habits of Billionaires, Icons, and World-Class Performers by Tim Ferriss is the first-ever book based on a podcast to debut at #1 on the New York Times Best Sellers List. It was # 1 for the weeks of December 25 and January 1, and remains in the top five for January 8 and January 15.

“The Tim Ferriss Show,” on which Tools of Titans is based, is the first business-interview podcast to cross the 100,000,000 download mark, according to podcasting network Libsyn. Ferriss’s show was also recently named a “Best of iTunes” for the third consecutive year. Tools of Titans is the perfect companion piece for fans and for new readers alike. The ultimate experimenter, Ferriss has tested all the wisdom in Tools of Titans himself and synthetizes the common habits and routines of the best in their fields to provide the definitive blueprint for living a better life in the New Year. Included are tips from Malcolm Gladwell, Tony Robbins, Brené Brown, Jamie Foxx, Peter Thiel, BJ Novak, Maria Popova, Edward Norton, Mike Birbiglia, and dozens more—plus brand new takeaways.

“We knew this book would be a bestseller for two reasons,” says Bruce Nichols, Senior Vice President and Publisher, Houghton Mifflin Harcourt Trade Publishing. “Not only does it distill the wisdom spread throughout the hundreds of hours of Tim’s podcasts, but beyond that, Tim adds a huge new layer of his own analysis and testing—so even if you’ve listened to every episode, you learn new things.”

“I created Tools of Titans for myself, as the ultimate CliffsNotes of bite-sized tactics and tips pulled from more than 100 world-class performers,” adds Ferriss. “To have their advice at my fingertips was a dream, and now, here we are. For my personal notebook to hit #1 is surreal and extremely rewarding; it shows just how far scratching your own itch can go.”

Tim Ferriss has been listed as one of Fast Company's "Most Innovative Business People," one of Forbes's "Names You Need to Know," and most recently one of Fortune's "40 under 40." He is an early-stage technology investor/advisor (Uber, Facebook, Shopify, Duolingo, Alibaba, and 50+ others) and the author of four #1 New York Times and Wall Street Journal bestsellers, including The 4-Hour Workweek and his latest, Tools of Titans: The Tactics, Routines, and Habits of Billionaires, Icons, and World-Class Performers. The Observer and other media have called Tim "the Oprah of audio" due to the influence of "The Tim Ferriss Show" podcast, which has exceeded 100 million downloads and has been selected for "Best of iTunes" three years running.

For nearly two centuries, HMH Trade Publishing has published some of the world’s most renowned novels, nonfiction, children’s books, and reference works. As part of a leading global learning company, it is uniquely positioned to offer educational and entertaining content for all audiences. Its distinguished author list includes ten Nobel Prize winners, forty-eight Pulitzer Prize winners, fifteen National Book Award winners, and more than one hundred Caldecott, Newbery, Printz, and Sibert Medal and Honor recipients. HMH publishes such distinguished authors as Philip Roth, Temple Grandin, Tim O'Brien, and Amos Oz, and a celebrated roster of children’s authors and illustrators including Kwame Alexander, Lois Lowry, and Chris Van Allsburg. HMH is also home to The Best American series®; Weber Grill, Betty Crocker®, Better Homes and Gardens®, How to Cook Everything®,  and other leading culinary properties; the Peterson Field Guides®; CliffsNotes™; books by J.R.R. Tolkien; and many iconic children’s books and characters, including Curious George®, The Little Prince, and The Polar Express. For more information, visit www.hmhco.com/popular-reading.