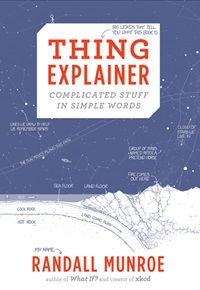 BOSTON – Global learning company Houghton Mifflin Harcourt (HMH) today announced a new collaboration with Randall Munroe, a former NASA roboticist and the New York Times bestselling author of What If? and Thing Explainer, whose work will be featured in the latest editions of HMH’s high school science programs.

"I love learning about the science that governs the universe around us and want to share the delight of discovering how things work and why," said Munroe. "When I was a student, I often came across charts and diagrams that opened my eyes to whole new areas of the world, and I'm excited to have a chance to pass that excitement on to others."

The newly-revised digital and print editions of HMH Chemistry ©2017, HMH Biology ©2017 and HMH Physics ©2017 will include content from Thing Explainer that are aligned to the curriculum and, in the book’s own words, explain “complicated stuff in simple words.” Students will have access to Munroe’s clear and engaging explanations that use only the 1,000 most common words in the English language as they delve into the mechanics of the scientific world. Examples include:

• The Pieces Everything is Made of (aka The Periodic Table);
• Bags of Stuff Inside You (The Human Torso);
• Tiny Bags of Water You’re Made Of (Animal Cells);
• Heavy Metal Power Buildings (Nuclear Reactors).

HMH will also be launching a brand new series of science programs for the 2017-18 school year that will feature four pieces of new, exclusive content that Munroe is preparing specifically for students as well as unique digital animations of existing Thing Explainer artwork. The program, HMH Science Dimensions™, has been developed from the ground up to align to the Next Generation Science Standards, a new set of science education content standards developed by states nationwide. Previews will be available in early 2017.

“Randall’s wit, originality, and deep scientific knowledge elevate our curriculum and is a great way to engage students,” said Peggy Smith-Herbst, Senior Vice President, HMH Studios. “His sense of humor and ability to make science fun will encourage a love of scientific inquiry and creativity, both within and beyond the classroom, and we are proud to be bringing his engaging insight exclusively to our customers.”

Houghton Mifflin Harcourt (NASDAQ:HMHC) is a global learning company dedicated to changing people’s lives by fostering passionate, curious learners. As a leading provider of pre-K–12 education content, services, and cutting-edge technology solutions across a variety of media, HMH enables learning in a changing landscape. HMH is uniquely positioned to create engaging and effective educational content and experiences from early childhood to beyond the classroom.  HMH serves more than 50 million students in over 150 countries worldwide, while its award-winning children's books, novels, non-fiction, and reference titles are enjoyed by readers throughout the world. For more information, visit www.hmhco.com.