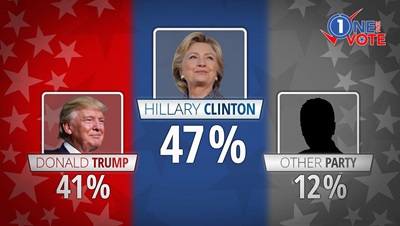 “If our students were voting today, they would have elected the first female president of the United States. That is a historic occasion that cannot be ignored, even if having a woman president is seen by our young people as a natural event,” said Angela Hunter, SVP and Executive Producer at Channel One News. “It has been very evident throughout this campaign that students care about political issues as well as the tenor of political discourse in this country. They are deeply invested in the outcome of this election.”

“OneVote has accurately predicted the next president of the United States in every mock election since the program began in 1992. In a few weeks, we will see if that record holds,” said Hunter.

In addition to selecting the next president of the United States, the OneVote ballot asked students about the political issue that is most important to them. The top three issues they named are:

Voting took place in schools nationwide Oct. 17-21. Nearly 300,000 votes were cast by students in grades 4-12 across all 50 states. Please visit OneVote.com for more information, including an electoral map and state-by-state breakdown of the OneVote 2016 results.

About Channel One News

Channel One News, a Houghton Mifflin Harcourt company, is an award-winning daily news program that encourages young people to become informed, global citizens. Every day, our newscast plays to more than 6 million students in thousands of classrooms across the country. We are the only news program created just for young people – with young journalists, young voices, covering the news from a young perspective. Channel One News provides the appropriate context to understand how global events affect students’ everyday lives, while providing educators with teachable moments in the classroom.

Houghton Mifflin Harcourt (NASDAQ:HMHC) is a global learning company dedicated to changing people’s lives by fostering passionate, curious learners. As a leading provider of pre-K–12 education content, services, and cutting-edge technology solutions across a variety of media, HMH enables learning in a changing landscape. HMH is uniquely positioned to create engaging and effective educational content and experiences from early childhood to beyond the classroom.  HMH serves more than 50 million students in over 150 countries worldwide, while its award-winning children's books, novels, non-fiction, and reference titles are enjoyed by readers throughout the world. For more information, visit www.hmhco.com.