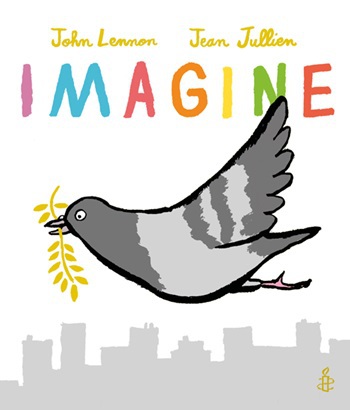 BOSTON - Houghton Mifflin Harcourt has acquired Imagine, a picture book featuring the lyrics of John Lennon’s iconic song and illustrated by the award-winning artist Jean Jullien. The book follows a young pigeon on a journey to spread a message of peace and tolerance and will be published in partnership with Amnesty International, the human rights organization, which has more than eight million supporters worldwide.

The North American edition, published by HMH’s Clarion Books imprint, will launch simultaneously with the United Kingdom and Australia on September 21, 2017, the International Day of Peace, with more than ten additional countries expected to publish in 2017. Frances Lincoln Children’s Books, an imprint of the Quarto Group, is the originating publisher.

Ellen Archer, President, HMH Trade Publishing, says, “HMH is honored to be the publisher of this beautiful book and its timeless plea for peace on earth. There could not be a better time for readers to be introduced to or reminded of this beloved song, accompanied now by such brilliant illustrations.”

Jean Jullien is a French graphic artist based in London and Los Angeles. His practice ranges from illustration to photography, video, costumes, installations, books, posters, and clothing to create a coherent yet eclectic body of work. He is the illustrator of several celebrated books for children, including This Is Not a Book and Hoot Owl, Master of Disguise. Originally from Nantes, France, Jullien currently resides in London.

John Lennon was a founding member of the Beatles, the most commercially successful band in the history of pop music. In 1970, he embarked on a solo career. “Imagine,” released in 1971, which Lennon composed in one session sitting at his piano, is just twenty-two lines long but has become a worldwide anthem of unity and hope. It ranks number three on Rolling Stone’s list of the 500 Greatest Songs of All Time; countless artists including Madonna, Stevie Wonder, Joan Baez, Elton John, Liza Minelli, Peter Gabriel, Diana Ross, Willie Nelson, Lady Gaga, and the New York Philharmonic have performed cover versions; and for nearly a decade, the song has been played prior to the New Year’s Eve ball drop at New York City’s Times Square. A tribute to John Lennon, in the Strawberry Fields section of New York City’s Central Park, is a mosaic of the word “Imagine.”

For nearly two centuries, HMH Trade Publishing has published some of the world’s most renowned novels, nonfiction, children’s books, and reference works. As part of a leading global learning company, it is uniquely positioned to offer educational and entertaining content for all audiences. Its distinguished author list includes ten Nobel Prize winners, forty-eight Pulitzer Prize winners, fifteen National Book Award winners, and more than one hundred Caldecott, Newbery, Printz, and Sibert Medal and Honor recipients. HMH publishes such distinguished authors as Philip Roth, Temple Grandin, Tim O'Brien, and Amos Oz, and a celebrated roster of children’s authors and illustrators including Kwame Alexander, Lois Lowry, and Chris Van Allsburg. HMH is also home to The Best American series®; Weber Grill, Betty Crocker®, Better Homes and Gardens®, How to Cook Everything®,  and other leading culinary properties; the Peterson Field Guides®; CliffsNotes™; books by J.R.R. Tolkien; and many iconic children’s books and characters, including Curious George®, The Little Prince, and The Polar Express. For more information, visit www.hmhco.com/popular-reading.