We Are Not Free

From New York Times best-selling and acclaimed author Traci Chee comes We Are Not Free, the collective account of a tight-knit group of young Nisei, second-generation Japanese American citizens, whose lives are irrevocably changed by the mass U.S. incarcerations of World War II.

Fourteen teens who have grown up together in Japantown, San Francisco.

Fourteen teens who form a community and a family, as interconnected as they are conflicted.

Fourteen teens whose lives are turned upside down when over 100,000 people of Japanese ancestry are removed from their homes and forced into desolate incarceration camps.

In a world that seems determined to hate them, these young Nisei must rally together as racism and injustice threaten to pull them apart.

About the author
Traci Chee

Traci Chee is a New York Times bestselling author. Her latest novel, We Are Not Free, is a National Book Award finalist and received four starred reviews. Her YA fantasy trilogy -- The Reader, The Speaker, and The Storyteller -- was a New York Times bestseller and shortlisted for multiple awards and accolades. Kirkus has starred all of her titles, a rare accomplishment she shares of such authors as Suzanne Collins, Philip Pullman and Lauren Oliver. Twitter: @tracichee, Instagram and Facebook: @TraciCheeAuthor, http://www.tracichee.com.

It’s been over three months since the attack on Pearl Harbor, and my oldest brother, Mas, has told me to come straight home from school each day. Take the bus, he says. No loitering around, he says. I mean it, Minnow.

I used to love walking back to the apartment in the afternoons, seeing all the interesting things going on in the city: bodies being excavated at Calvary Cemetery, buildings going up in empty lots, chattering kids coming out of Kinmon Gakuen, the old Japanese language school.

But that’s been closed since last December, when it became the Civil Control Station, because Pearl Harbor changed everything for us. We have a new eight-p.m. curfew. People are starting to talk about involuntary evacuation. And Mas has warned me not to get caught out alone. Don’t do anything that’ll make them come down on you, he says. Don’t give them any excuse.

I don’t know what happened. I was walking out of George Washington High School, headed for the bus stop like always, when I saw the football team practicing on the field, racing back and forth across the grass with the red towers of the Golden Gate Bridge rising beyond the school building like a promise, and before I knew it, I was sitting in the bleachers with my sketchbook in my hands and my butt going numb on the concrete.

I’m so panicked, I gather up my sketchpad and bolt right past the bus stop, hoping to make it home before Mas gets back from work.

No matter how many times I try to explain it, he never understands. Sometimes I get so wrapped up in a drawing that I get transported onto the paper, and the charcoal suspension cables and pencil players become more real to me than the bleachers or the grass or the school, and when I come back to my body, it’s hours later, everyone’s gone, and I’m walking home alone as fog cascades into the bay.

I know it’d be faster if I waited for a bus, but I’m afraid if I hang around at one of the stops, someone will chase me off, or call me “Jap!” or worse. So I keep walking, and buses keep passing me while I’m between stops, and I keep thinking I should just wait at the next one, but . . .

Mas says that’s my problem—there’s always something going on inside my head, but I never think.

My middle brother, Shig, likes to tell him it’s because my head’s up in the clouds, where it doesn’t do me any good.

I’m still walking, trying to decide if I should keep going or try waiting, when I catch sight of a flyer for Sutro Baths in a drugstore window, and I stop cold. For a second, all I can think is, Mas was right. I don’t think.

I should’ve gone straight home. I should’ve waited for a bus. I shouldn’t be out like this. Because it’s dangerous to be hanging around with a face like mine, three months into the war.

It was a Sunday in December, and we were getting ready for lunch when Mas asked Shig to turn on the radio and we all heard the news that Japan had attacked Pearl Harbor.

Mom’s face went taut and white as a sheet. If I was going to draw her the way she looked then, I’d draw her with thin lips and frightened eyes, pinned to a clothesline, her body flapping in the wind of a passing Nakajima B5N bomber.

★ "Chee is a master storyteller…. Here, she uses her own San Francisco–based Japanese American family's history to inform a blazing and timely indictment of the incarceration of Japanese Americans during WWII. Her passion and personal involvement combine with her storytelling talents to create a remarkable and deeply moving account of the incarceration…. [We Are Not Free] should become required curriculum reading on a shameful and relevant chapter in U.S. history." —Booklist, STARRED review

★ "The novel may be fiction, but it will be hard for readers not to fall deep into the harsh realities these teens face. The writing is engaging and emotionally charged, allowing the readers to connect with each character...Chee’s words are a lot to take in, but necessary and beautiful all the same." —School Library Journal, STARRED review

★ "Inspired by Chee’s family history, the book powerfully depicts, as an author’s note states, “a mere fraction of what this generation went through.” This is an essential contribution to the understanding of the wide-ranging experiences impacting people of Japanese ancestry in the U.S. during WWII."  —Publishers Weekly, STARRED review

"A brilliant and intimate portrayal of several San Francisco teenagers during the mass incarceration of Japanese-Americans in World War II. Chee's nuanced and unforgettable characters will serve to enlighten readers about this devastating and shameful piece of America's past. A beautiful, painful, and necessary work of historical fiction."

“These powerful interconnected stories of incarceration during WWII told by Nisei youth will wrap around your heart like barbed wire. With deft touches of humor, heart, pathos, and anger, We Are Not Free by the talented Traci Chee is the best Japanese American incarceration novel I’ve read. I loved this book that epitomized gaman and will be buying a copy for everyone in my family.”

“This novel is nothing short of a masterpiece. In We Are Not Free, Traci Chee gives us the most comprehensive novelization of the Japanese American internment that I've ever read, without sacrificing the intimate and achingly human individual experience. Traci Chee's characters don't step off the page so much as they shuffle, sashay, and swagger. With them, you will blaze with incandescent rage, crumble with internalized shame, and laugh with true, soul-deep joy. Each individual voice, each individual story is a gem; taken as a whole, they are an unforgettable wonder that you will want to return to again and again.”

—Misa Sugiura, author of This Time Will Be Different and It's Not Like It's a Secret, winner of the 2018 APALA Award for YA Literature

“A powerful and heartbreaking look into history. In a time when it's integral to remember the failings of our past so that we can ensure we preserve our humanity in the present, Chee brings us a relevant and poignant tale of a group of Japanese-American teens who were forced to feel unwelcome in a country they've always called home. We Are Not Free compels us to face the reality that when fear guides us, our humanity suffers. It's such a testament to Chee's storytelling that she's able to show us the horrors that happened to these Japanese-American teens and still include a thread of hope throughout. I dare you to try to read this book with dry eyes. A must-read book.”

"A powerful and starkly honest story of identity and home, fear and hope, We Are Not Free is like an emotional punch to the gut."

"Powerful and illuminating, and as hopeful as it is heartbreaking—one of the best YA books I’ve read in years." 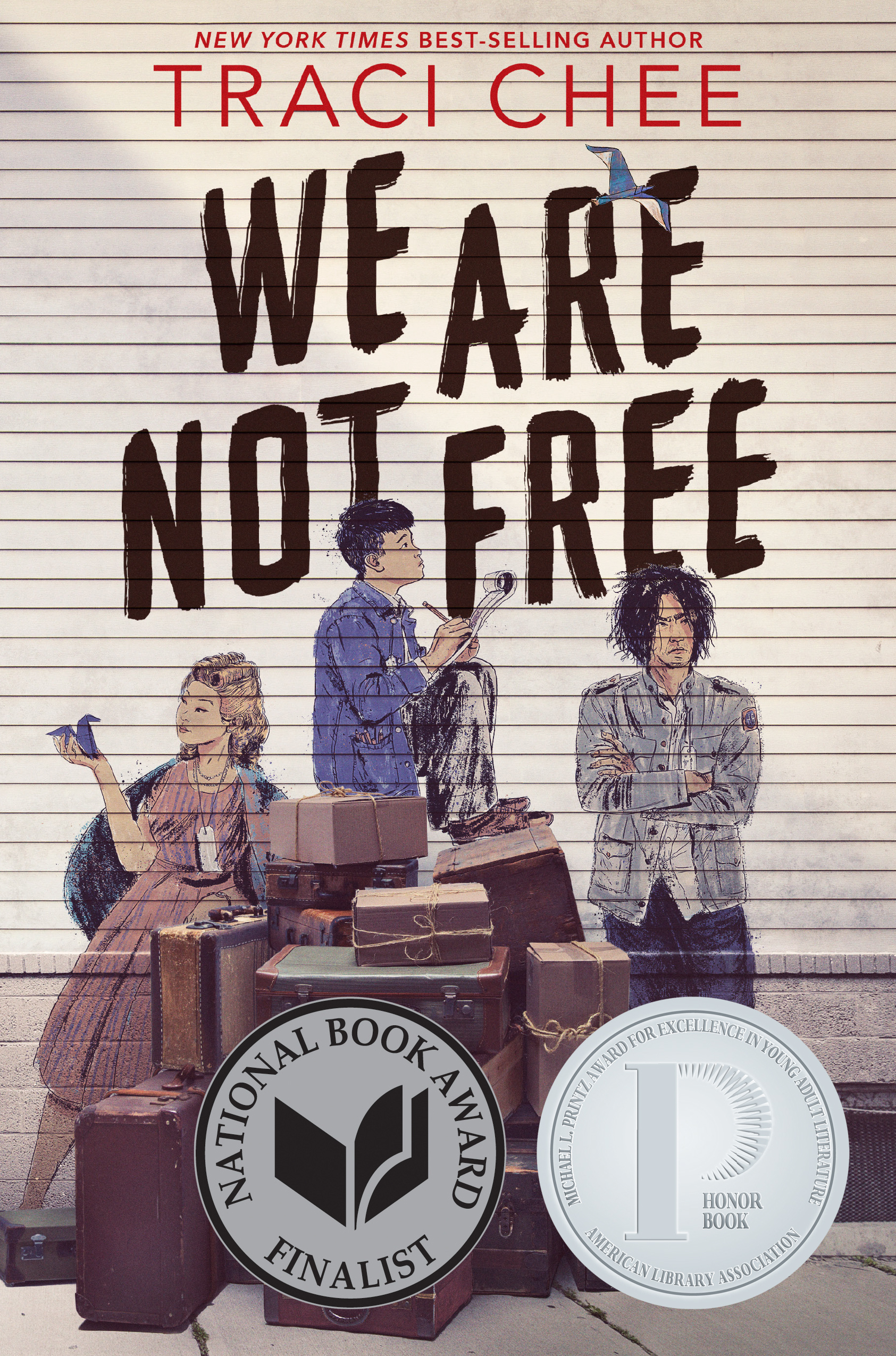