Journey Across the Hidden Islands

A ritual journey takes on urgent significance as two princesses and their winged-lion companion travel across their island kingdom to confront a dragon in this action-filled, funny, and heartwarming middle grade fantasy from the author of The Girl Who Could Not Dream.

The traditional Emperor’s Journey is meant to be uneventful. But as the princesses Seika and Ji-Lin—twin sisters—travel to pay respects to their kingdom’s dragon guardian, unexpected monsters appear and tremors shake the earth. The Hidden Islands face unprecedented threats, and the old rituals are failing. With only their strength, ingenuity, and flying lion to rely on, can the sisters find a new way to keep their people safe?

Don’t fall, don’t fall, oh no, I’m going to fall . . . Crouching, Ji-Lin raised her sword over her head. She counted to thirty and then straightened to standing, without falling. Slowly, she lifted one foot to her knee. Her other bare foot was planted on the top of a pole, on the roof of the Temple of the Sun, at the top of a mountain.

Sweat tickled the back of her neck, under her braid. She was supposed to be calm, like a bird on a breeze or a leaf in summer or some other very calm nature image she could never quite remember. But she felt too jittery, as if all her muscles were vibrating.

If she passed this test, she’d be one step closer to being like the heroes of the tales she loved.

She’d also be one step closer to her sister.

Tomorrow was her and her twin’s twelfth birthday, and if she passed this test, then maybe, maybe she’d be allowed to spend the day with her. They could steal a lucky orange from the palace kitchen and climb the spires and watch the gondoliers steer through the canals . . .

I’ll pass, Ji-Lin thought. No matter what I have to do.

Twisting on the pole, Ji-Lin faced north, then east, toward the rising sun. Yellow light bathed the mountains, soaked the trees, and tinted the streams and waterfalls. In the sunlight, the water looked like liquid gold as it cascaded over the rocks and crashed into the mist that hid the valley below. Fire moths flew in and out of the mist, streaking it with glowing red-orange dust, and a pair of flying monkeys chased one another before disappearing into the soft whiteness. Calm, she told herself. Focused. Fierce. DO NOT FALL.

When the attack came, it was fast. A shadow darkened the sky. At first, it was a speck like a bird, and then it rapidly grew larger and larger, until the silhouette of a winged lion blotted out Ji-Lin’s view of the rising sun.

The lion hurtled down from the sky, his wings folded for speed. Sunlight caught his mane, creating a halo. Roaring, he stretched his claws toward her, and it didn’t matter that it was almost her birthday or how much she missed her sister. All that mattered was that the test had begun.

Ji-Lin held the sword point out with both hands as she kicked the pole beneath her. The lion veered to avoid the tip of her sword as the pole broke and Ji-Lin dropped to the roof. She landed, kicked the pole up with her foot, and caught it in one hand. Yes! she thought, and then she hurled the pole at the lion’s belly without lowering her sword.

He bashed the pole out of the air with his paw, then swiped at her, but she was already in motion. Go, go, go! Her bare feet were soundless on the clay tiles as she ran across the roof. The lion filled the air with thunderous roars to rattle her bones and make her afraid. But she’d heard too many roars during her lessons to be shaken.

Balancing, she ran along the roof and then leaped onto the next building. A tile shifted under her feet as she landed. The winged lion dove for her again, and she scooped up the broken tile and threw it. Spinning in the air, it hit the lion’s face. He turned his head before it could strike his golden eye. Uh-oh, she thought. Too close! Ji-Lin ran again. He was right behind her. She imagined she felt his warm breath on her neck.

She had to try something else. The goal was straightforward: she had to jump onto the lion’s back and ride him before he forced her off the roof to the ground. But how to do it?

Be swift. Be bold. Be unexpected.

How many times had she heard those words? Ji-Lin had come to the temple the day after her eleventh birthday, and at least twice a day the drummers would chant them as they beat out the rhythm of morning exercises; then the masters would repeat them during the ritual to welcome sunset. So a full year of hearing those words meant . . . It means think, she ordered herself. And run faster!

Pivoting, she raced down the roof. She pushed harder with each stride until she was leaping. It wasn’t going to be enough. He was going to catch her! Time to be unexpected, she thought. As the lion dove for her, she threw her sword at him. It flashed as it spun through the air.

The lion caught it, trapping the hilt between his front paws, at the same moment Ji-Lin reached the edge of the roof. She jumped off the roof as the lion fumbled the sword, hurling herself into the air, and she landed half on and half off the lion’s back. She hung on to his wing and, twisting her body, pulled herself upright. Burying her hands in his mane, she wrapped her legs around his broad chest.

Surprised by her sudden leap, the lion dropped her sword. It fell, flashing in the dawn light, until it clattered in the courtyard below. There it lay, silver against the black stone, glistening like a dead snake between the obsidian sculptures.

Roaring, he soared over the temple. Ji-Lin felt the wind batter her face. The wind roared in her ears as loudly as the lion himself. The lion aimed for a trio of green mountains. His wings pumped beneath her, and she felt his powerful back muscles strain. Sunlight pierced her eyes, and she squinted until the lion plunged into a cloud. Mist swirled around them, erasing any sense of up or down, sky or ground. She heard the cries of birds screaming warnings about the sudden appearance of a large cat in their sky. The winged lion twisted and swooped.

They burst out of the cloud, high above the mountains. Below, between clouds, Ji-Lin could see her island, the imperial island of Shirro, the largest of the Hundred Islands of Himitsu, a green jewel in the midst of blue ocean.

Beneath her, she felt a rumble as the winged lion, Alejan, spoke: “You are going to get in so much trouble. Granted, it was brilliant. But so much trouble! Never fear, though; I will defend you and tell them you are brave beyond brave, exactly like Master Shai when she defeated two—?”

Ji-Lin interrupted him before he could wax on about his hero. As much as she loved that tale of Master Shai, this was not the time. “I played the game! You were the evil koji, and I tamed you.” He’d taken the role of a monster intent on throwing her from her perch, and he’d had instructions to not go easy on her.

“Your sword, Ji-Lin. You threw it! It’s your claws, your teeth! You know how they feel about students who lose their weapons. I think you were clever and inventive and brave, but you know they like their rules.”

He was right, of course. She might have succeeded in “taming” him, but they weren’t going to like the way she’d done it. She groaned. “They’ll make me clean the toilets, won’t they?”

"The writing is accessible, and even reluctant readers will find the characters relatable and the tale engrossing."  —SLJ

"The solidarity the sisters find in each other and the consistent way they choose to put the other before themselves is a refreshing feature of the story. Fans of fantasy adventures starring stalwart teams of loyal siblings will appreciate this, too."—Booklist

"An enjoyable coming-of-age fantasy-adventure that also showcases the deep bond between sisters."—Kirkus

“A perfect combination of adventure, humor, and pure imagination, seasoned with a dash of creepiness!”—Jessica Day George, New York Times bestselling author of the Tuesdays at the Castle series 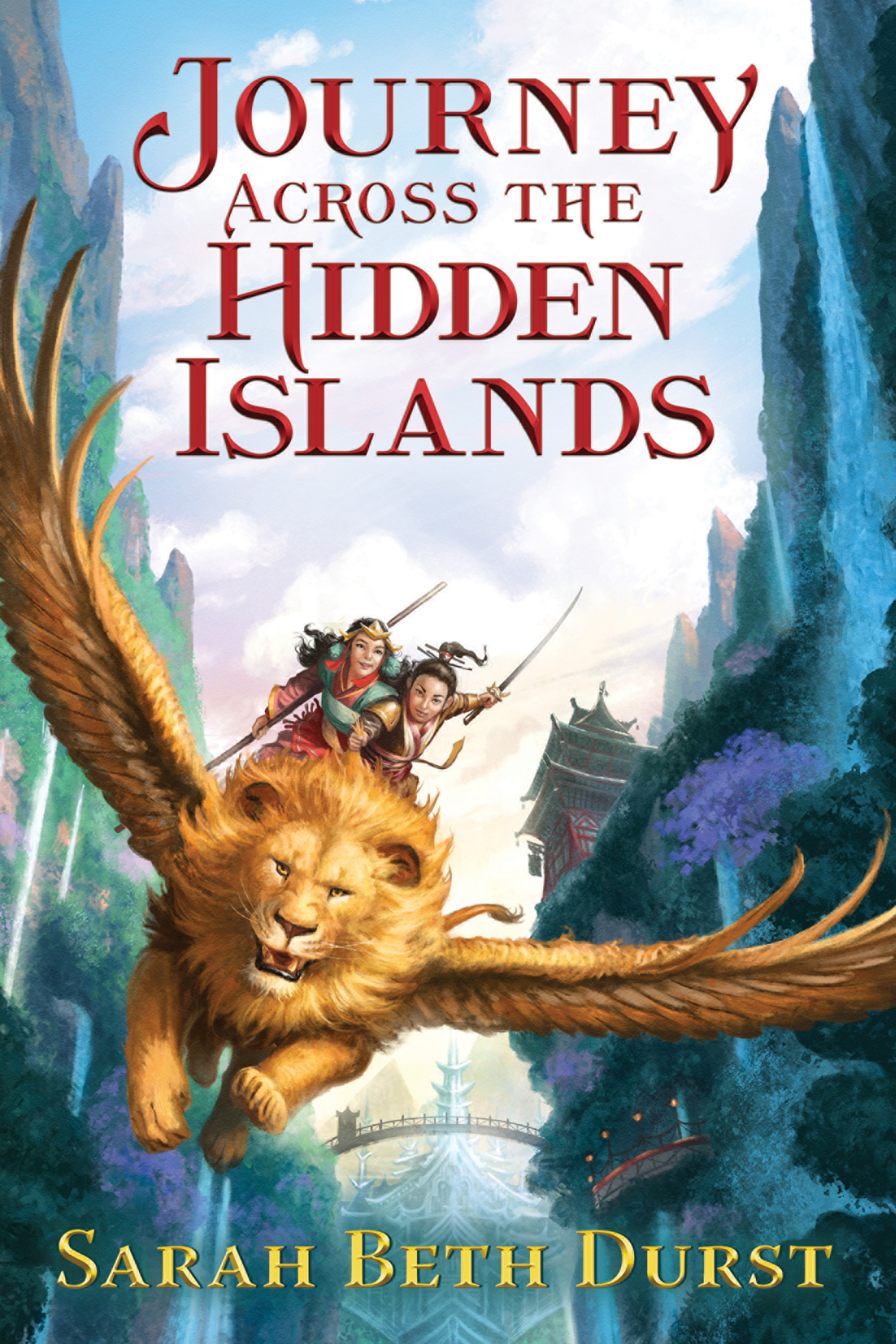