The penultimate episode in the Sisters Eight saga!

Finally! Zinnia’s turn has arrived. The poor girl has been waiting for her time in the spotlight quite long enough. Really, it would be cruel to make her wait any longer. What will her power and her gift be? Will either of them prove to be as much of a doozy as she has been hoping for? There’s only one way to find out: Let her story begin. It’s finally Zinnia Time!

The penultimate episode in the Sisters Eight saga!

Finally! Zinnia’s turn has arrived. The poor girl has been waiting for her time in the spotlight quite long enough. Really, it would be cruel to make her wait any longer. What will her power and her gift be? Will either of them prove to be as much of a doozy as she has been hoping for? There’s only one way to find out: Let her story begin. It’s finally Zinnia Time!

About the author
Lauren Baratz-Logsted

Lauren Baratz-Logsted has written books for all ages. Her books for children and young adults include the Sisters Eight series, The Education of Bet and Crazy Beautiful. She lives with her family in Danbury, Connecticut.

It was Friday morning, August 1, and we were all hanging around in the drawing room, doing nothing but slouching where we sat, except for Georgia, who was lying on her back on the floor, throwing a ball toward the ceiling and catching it, over and over again. Even the cats were slouching, except for Greatorex, who kept leaping upward in hopes of catching Georgia’s ball.

Pete had entered a moment ago with Mrs. Pete. Mrs. Pete had her hair up in curlers while Pete was dressed in his work uniform of navy blue T-shirt and dangerously low-slung jeans. He had his tool belt on.

"We are not glum," Annie corrected him. "We are depressed."

"With good cause," Durinda added.

"Okay," Pete said. "Why are you depressed then?"

"Because it is August," Georgia said, throwing her ball at the ceiling again.

"I don’t understand," Pete said. "Isn’t that a good thing? August means no more chance of Rebecca shooting fire from her fingertips and perhaps accidentally burning the house down around our ears."

"There is that," Jackie said in an attempt at optimism. But even she couldn’t keep that up for very long. She sighed and added, "August seems so very long this year. A whole thirty-one days."

"But that’s good, isn’t it?" Pete tried again. "You have a whole month of summer vacation left before you go back to school."

"Our birthday is this month," Marcia said. "On August eighth, beginning at eight a.m., we will begin turning eight at the rate of one Eight per minute."

"I did remember that," Pete said. "But isn’t that a good thing?"

We had to give Pete credit: he did keep trying.

"It is not," Petal said. "For the first time in our lives, Mommy and Daddy will not be with us on our birthday." A tear escaped Petal’s eye then, but for once none of us moved to comfort her, not even Durinda or Jackie, because tears were beginning to escape all of our eyes.

"I miss having the ability to shoot fire from my fingertips," Rebecca said. "I know I made a promise not to use that power anymore unless necessary, but I miss just the very idea of that power."

"I thought I would be happy for it to be August," Zinnia said. "It being August means that it is my turn, finally, to get my power and my gift."

"I will be the eighth Eight to get my power and gift," Zinnia said, "after which, according to that first note we found behind the loose stone, we will finally discover what happened to Mommy and Daddy when they disappeared."

Yes, Rebecca was back to that again. Well, who could blame her for being in a dark mood? We were all in dark moods.

"Now, I know you will try to say that is a good thing, Mr. Pete," Petal said.

We looked at Pete standing there opening his mouth to speak, and we saw that Petal had been right: of course he was about to say that.

"Well, not a good thing if we’re talking about what Rebecca said," Marcia corrected Petal. "Rather, you’ll say that what Zinnia said is a good thing."

"The part about finding out what happened to Mommy and Daddy," Jackie said, just so we were all clear. "That’s what you’ll say is a good thing."

"The problem is," Georgia said, "we are at August first now but August is a whole thirty-one days. Oh, why couldn’t August be a shorter month, like June or September? Really, the best thing would be if August were like February, only not during a leap year."

"Georgia’s right," Durinda said. Things had to be pretty bad around here if Durinda was agreeing with Georgia. "I think I could bear to wait twenty-eight days to finally learn the truth," Durinda went on. "But waiting thirty-one whole days is really just too much. Then, too, there’s always the question: What if the answer is something truly awful? What will we do then?"

"We usually take a vacation in the summer," Annie said, bringing the conversational ball full circle. We’d begun with Annie and gone one by one down to Zinnia, and now we’d returned to Annie again. Sometimes we felt as though our talking was like other people practicing musical scales. "We usually take one in the winter over the holidays and another in the summer. But this summer there won’t be one, not without Mommy and Daddy here."

"But what about the trip we took to France?" Pete said.

"That doesn’t count as a real vacation," Annie said. "We went there for a wedding, so it was more like a working holiday."

"You could still take a real vacation," a female voice said.

It took us a while to realize who that voice belonged to. We looked around at one another. Nope, that wasn’t any of our voices. And it certainly wasn’t Pete’s. Then we realized it was Mrs. Pete. Pete had been hogging the conversation ball so much, we’d forgotten she was even in the room!

And because it took us a moment to identify the speaker and then another moment to get over our shock at who was actually speaking, it took a further moment for what she’d said to fully register.

"But we can’t do that," Georgia objected.

"Of course we can’t," Durinda said, once again, shockingly, agreeing with Georgia.

"We can go by ourselves to do a Big Shop," Marcia said.

"Or even a Really Big Shop if necessary," Jackie said.

"But we can’t go on a whole vacation all by ourselves," Annie said.

"It is tempting, though," Rebecca said.

"Eight little girls on vacation all by themselves?" Zinnia said. "That would draw too much attention."

"Drawing attention is always a bad thing," Petal said. "Draw attention to yourself and before you know it, your jig is up. Nope. Sorry. No can do. Perhaps another year. Or better yet, never."

"I meant that we could take you on a vacation," Mrs. Pete said gently.

"We could!" Pete said, taking the conversational ball back from Mrs. Pete. Huh. We’d never noticed before how much more of the talking he did. Maybe it was a guy thing?

Georgia made a face at him. "But don’t you have to work for a living?"

"I have read about that," Marcia said. "If a person is supposed to work for a living and he stops doing it for too long, it can be a really bad thing."

Poor Petal. She still believed that all bill collectors were called Bill Collector, even though the only person we’d ever met who was actually named Bill Collector had been very nice to us and hadn’t taken any of our money at all.

"I am allowed to take a vacation from time to time," Pete said.

"Seems to me that all you ever do lately," Rebecca said, "is take time off from work."

"I don’t think this is really the moment for that, Rebecca," Jackie pointed out. "When the Petes are kind enough to offer to take us on vacation, it hardly seems appropriate to point out Mr. Pete’s recent lax work habits."

"I want to go on a vacation!" Zinnia said.

"Oh, I don’t know about this," Petal said worriedly. "Don’t vacations sometimes end badly for people? If we stay home, we need never find out the answer to that question." 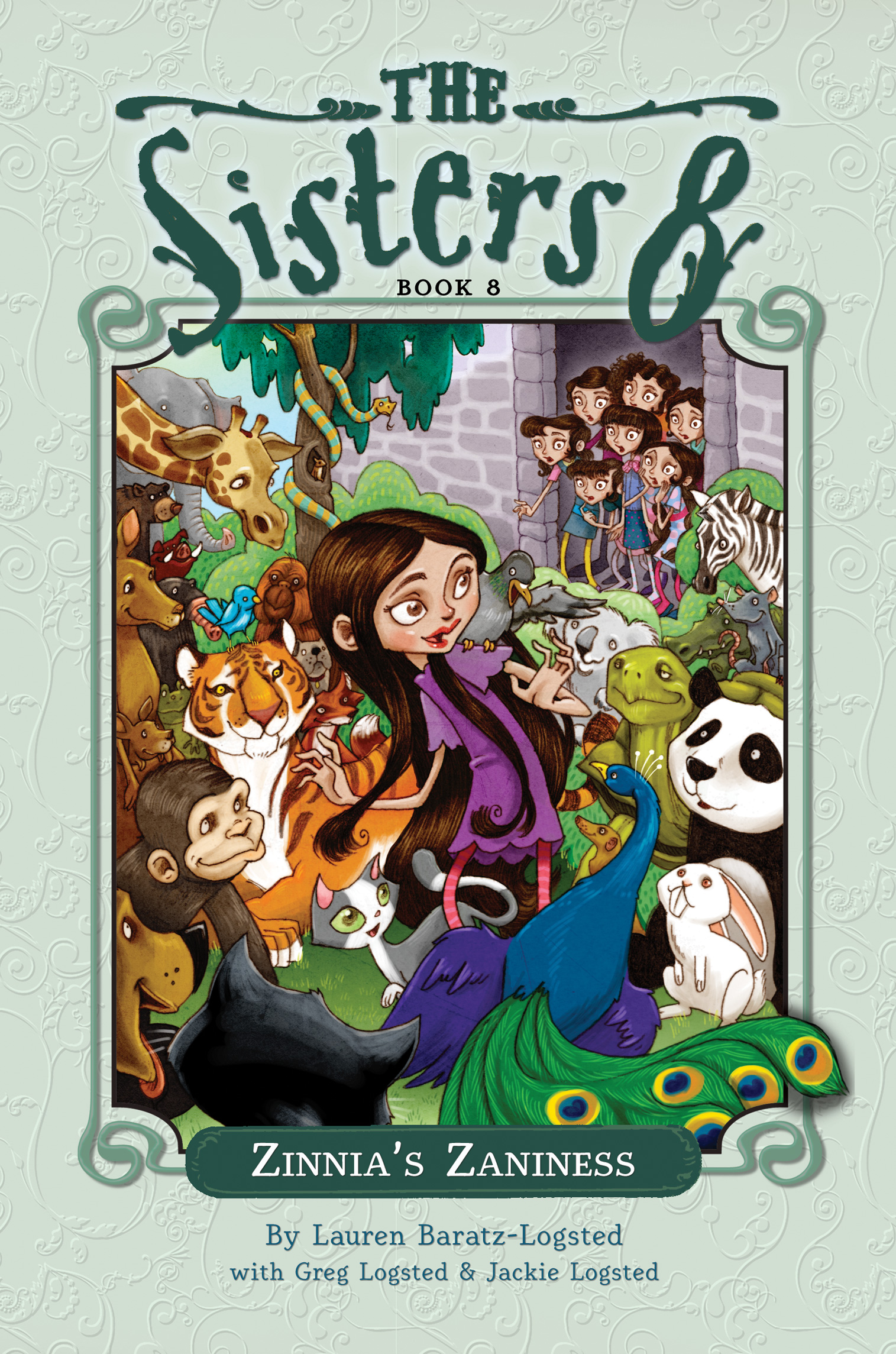