The deep emotional connection that develops between two teens who meet in the hospital is explored in this novel, told in two voices. The Fault in Our Stars meets Eleanor and Park in a tough and tender story that's a lot about love (and a little about cancer).

“When I was little I believed in Jesus and Santa, spontaneous combustion, and the Loch Ness monster. Now I believe in science, statistics, and antibiotics.” So says seventeen-year-old Zac Meier during a long, grueling leukemia treatment in Perth, Australia. A loud blast of Lady Gaga alerts him to the presence of Mia, the angry, not-at-all-stoic cancer patient in the room next door. Once released, the two near-strangers can’t forget each other, even as they desperately try to resume normal lives. The story of their mysterious connection drives this unflinchingly tough, tender novel told in two voices.

About the author
A. J. Betts

A. J. Betts grew up in Far North Queensland, Australia. She has taught in Brisbane and traveled the world with a backpack and camera. When she's not writing or teaching, she rides bikes, bakes, and occasionally communes with the sea lions that live near her home in Watermans Bay. Visit her website at www.ajbetts.com.

A newbie arrives next door. From this side of the wall I hear the shuffle of feet, unsure of where to stand. I hear Nina going through the arrival instructions in that buoyant air hostess way, as if this “flight” will go smoothly, no need to pull the emergency exit lever. Just relax and enjoy the service. Nina has the kind of voice you believe.

She’ll be saying, This remote is for your bed. See? You can tilt it here, or recline it with this button. See? You try.

Ten months ago, Nina explained these things to me. It was a Tuesday. Plucked from a math class in period two, I was bustled into the car with Mum and an overnight bag. On the five-hour drive north to Perth, Mum used words like “precautions” and “standard testing.” But I knew then, of course. I’d been tired and sick for ages. I knew.

I was still wearing my school uniform when Nina led me into Room 6 and showed me how to use the bed remote, the TV remote, and the internal phone. With a flick of her wrist she demonstrated how to tick the boxes on the blue menu card: breakfast, morning tea, lunch, afternoon tea, dinner. I was glad Mum was paying attention, because all I could think about was the heaviness of my school bag and the English essay that was due the next day, the one I’d gotten an extension for already. I do remember the clip Nina had in her hair, though. It was a ladybug with six indented spots. Funny how the brain does things like that. Your whole world is getting sucked up and tossed around and the best you can do is fixate on something small and unexpected. The ladybug seemed out of place, but like a piece of junk in the ocean it was something, at least, to cling to.

I can recite the nurses’ welcoming spiel by heart these days. If you get cold, there are blankets in here, Nina will be saying. I wonder what hair clip she’s wearing today.

And I know that she loves it and hates it. Loves it because there’s someone new to meet and greet. Hates it because this shouldn’t be wished on anyone.

“When did we last get a new one?” Mum recalls names. “Mario, prostate; Sarah, bowel; Prav, bladder; Carl’s colon; Annabelle . . . what was she?”

They’ve all been oldies over sixty, well entrenched in their cycles. There was nothing new or exciting about any of them.

A nurse darts past the round window in my door—Nina. Something yellow’s in her hair. It could be a chicken. I wonder if she has to go to the kids’ section of stores to buy them. In the real world, it’d be weird for a twenty-eight-year-old woman to wear plastic animals in her hair, wouldn’t it? But in here, it kind of makes sense.

My circular view of the corridor returns to normal: a white wall and two-thirds of the

Mum mutes the TV with the remote and shifts in her chair. Hoping to pick up vital audio clues, she turns her head so her good ear is nearest the wall. When she tucks her hair behind her ear, I see there’s more gray than there used to be.

At this point, the standard sequence is as follows: The new patient’s “significant other” comments on the view, the bed, and the size of the bathroom. The patient agrees. There’s the flicking through the six TV channels, then a switching off. Often, there’s nervous laughter at the gray stack of disposable urinals and bedpans, prompted by the naive belief the patient will never be weak enough or desperate enough to use them.

And then there’s a stretch of silence that follows their gaze from one white wall—with its plugs and label-makered labels and holes for things they can’t even imagine yet—to the other. They track the walls, north to south, east to west, before they sag with the knowledge that this has become real, that treatment will start tomorrow, and this bed will become home for several days, on again, off again, in well-planned cycles for however many months or years it’ll take to beat this thing, and there is no emergency exit lever. Then the significant other will say, Oh, well, it’s not so bad. Oh, look, you can see the city from here. Look.

Sometime later, after unpacking clothes and trying out the cafeteria’s coffee for the first time, the new person inevitably crawls into bed with two magazines and the knowledge that this isn’t a flight after all, but a cruise, and their room is a cabin beneath the water’s surface, where land is something only to dream of.

But whoever is in Room 2 isn’t following the standard sequence of action. There’s a loud thump of a bag and that’s it. There’s no unzipping. There’s no click-clacking of coat hangers at the back of the wardrobe, no rattling of toiletries in the top drawer. Worse, there’s no soothing verbal exchange.

“Only because you’re losing,” I say, trying to buy the new patient some time. Mum’s only behind by five points and admittedly we’re both having a crap round. My best word has been BOGAN, which caused some debate. Hers was GLUM, which is pretty sad.

Mum lays out BOOT and adds six points to her score. “Nina didn’t mention there was a new admission.”

She says this without irony, as if she actually expects to be told of the comings and goings of patients on Ward 7G. Mum’s been here so long, she’s forgotten she belongs somewhere else.

My mother: the Unofficial Welcoming Committee of the oncology ward. The maker of calming teas, and the bringer of cafeteria scones with individual portions of plum jam. The self-appointed sounding board for patients’ families.

“Finish the game,” I tell her.

“But what if they’re alone? Like what’s-his-name? Remember him?”

“Maybe they want to be on their own.” Isn’t that normal? To want to be alone sometimes?

Then I hear it too. I can’t make out the words at first—there’s a plaster wall between us, about six centimeters I guess—but I hear a simmering of sounds.

“Two women,” Mum says, her hazel eyes dilating. Her mouth twists as she listens to the s’s and t’s that spit and hiss. “One is older than the other.”

“Stop snooping,” I tell her, but it’s not as if we can help it. The voices are growing louder, words firing like projectiles: Shouldn’t! Stop! Don’t! Wouldn’t!

“What is going on in there?” Mum asks, and I offer her my empty glass to...

"Above average in this burgeoning subgenre; it’s the healing powers of friendship, love and family that make this funny-yet-philosophical tale of brutal teen illness stand out."

* "Zac & Mia holds its own as a smart, well-crafted story about the importance of friendship and feeling understood."

"Betts portrays cancer as hard, scary, and isolating, but beatable—or at least bearable—if one isn't facing it alone, and her depiction of a boy trying to hold onto a normal life and a girl realizing she can't keep hers from changing has power."

"This Australian import, told from alternating perspectives, introduces two characters who are remarkable in their own right."

"There’s complexity in their sometimes thorny relationship that makes this compelling as more than just a romance, but their connection is ultimately satisfyingly heartfelt. Hand this to readers looking for a love story with shadows but not inevitable doom."

Winner of the 2012 Australian Text Prize 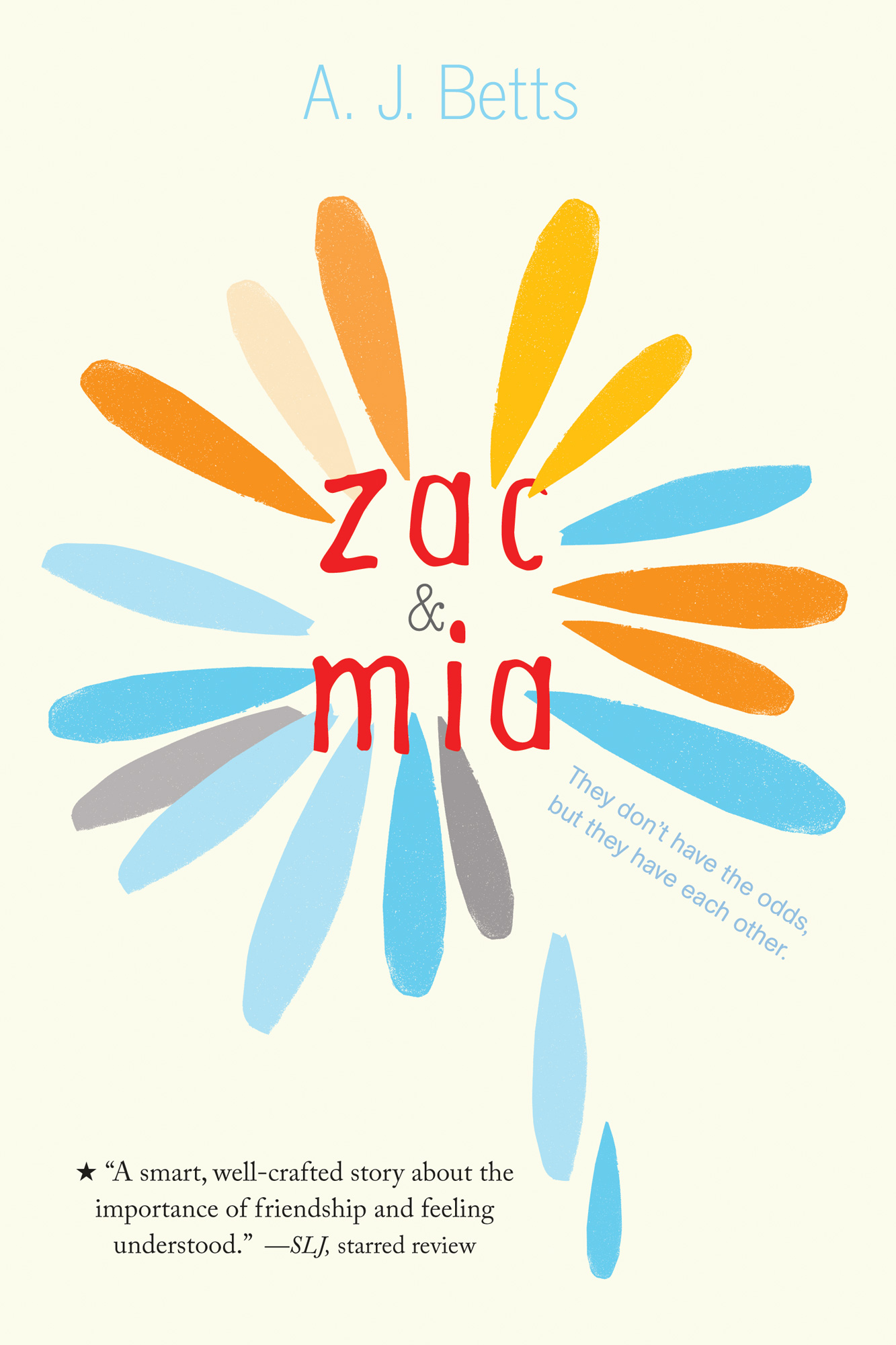