You and Me and Him

Maggie Bowers thinks she knows what to expect her junior year of high school--yeah, it would be nice if her mother didn’t care so much about her weight, but at least she has Nash, her out-of-the-closet best friend and a cool afterschool job at the local record store. But when Tom moves to town at the start of the school year they have something unexpected in common—feelings for the same guy. Up until now Maggie and Nash they have always chosen each other, but what if winning someone’s heart means losing their soul mate?

“Do not ignore a call from me when you know I am feeling neurotic about a boy. That is Best Friend 101.” —Nash

Maggie and Nash are outsiders. She’s overweight. He’s out of the closet. The best of friends, they have seen each other through thick and thin, but when Tom moves to town at the start of the school year, they have something unexpected in common: feelings for the same guy. This warm, witty novel—with a clear, true voice and a clever soundtrack of musical references—sings a song of love and forgiveness.

About the author
Kris Dinnison

Kris Dinnison learned to read when she was five years old. She grew up reading books nobody else had read and listening to music nobody else had heard of and thinking she was weird, which she kind of was. She spent nearly two decades as a teacher and librarian working with students from kindergarten to graduate school. The bulk of that time she spent teaching High School English while dreaming of becoming a writer. Now she lives and writes in Spokane, Washington. Visit her website at www.krisdinnison.net.

Let’s get one thing straight from the very beginning: I am not one of those shrinking-violet fat girls. I don’t sit alone in my bedroom playing Billie Holiday albums while drowning my sorrows in a carton of ice cream. Okay, once—maybe twice—a year, but not every weekend. I have friends, a great job in a vintage record store, and even some minor social status. But I am an overweight teenage girl going to an American high school. It doesn’t take a clairvoyant to figure out there are going to be some issues.

The current issue: Which outfit will maximize the four and half pounds I lost this summer and minimize the remaining flesh? As usual, my mom’s annual summer diet plan for me didn’t result in any magical transformations, so for the debut of my junior year, I decide on my flowy hippie-chick skirt and a black T-shirt with sleeves too long for the heat of early September. I don’t love this outfit. But it fits, kind of. And it’s not hideous. Most of the clothes in my size look like they were designed for retirees in Miami Beach, Florida. I do not like my shirts bedazzled in any way. Someone in the plus-size fashion industry thinks if you put shiny stuff on a T-shirt, no one will notice the size of the person underneath. This particular first-day outfit is nothing tragic, but it’s more of a fashion whisper than a fashion statement.

I climb on the bus and make a beeline for Nash.

“Maggie.” He gives me a slight wave, then covers it by smoothing down his rockabilly sideburns. (He grooms them, no lie, with mustache wax.) I slide into the seat beside him. Nash shifts upward as the seat sags in my direction.

“Move your skinny ass over,” I say.

“Like my skinny ass has a choice?” He moves. “Nice skirt.” Nash squinches up his face like something smells bad.

I sigh. Nash is all about edgy, and my sixties Woodstock wear does not scream edgy. I feel a trickle of sweat drip down between my shoulder blades.

Nash pats his shellacked do, making sure it has kept its height through the bus ride. Finding all the follicles in place, he turns his attention to me. He fishes a peppermint lip balm out of his pocket and hands it over. He then picks three or four of my long, brown hairs off my shirt. Nash always grooms me like some fastidious chimpanzee mother. Finally, he straightens the silver charm on its chain around my neck. The charm was Nash’s gift to me on the first day of high school. It’s this cool spiral; he says it’s to remind me that he’s got my back. Always. I pretty much never take the thing off.

“Thanks,” I say when he’s done making me presentable.

Nash holds out his hand. “Did you bring the goods?”

I dig in my bag and pull out a Ziploc baggie. Inside is one of my signature breakfast bars, tailored especially for Nash: cashews, chunky peanut butter, oats, cinnamon, dried cherries, and a few dark chocolate chips. I know. Shocking, right? A fat girl who bakes. So cliché. But I started making these bars for Nash a few years back when his dad left and things went to shit at his house. He was living on ramen noodles and cold cereal, so now the bars are part of our morning routine.

I wave the baggie over my head, keeping his breakfast just out of reach. “Who loves you, baby?”

He snatches the bag from my hand and pinches off a corner of the bar, popping it in his mouth. “Mmmmmm.” His mouth is full. “What’s different?”

“A little cardamom. Fewer cherries. It was too sweet.”

I wait as he chews, looking out the window at the rows of identical cedar split-levels lining the streets. It’s a decent neighborhood, but it’s in between: not new, but not old enough or cool enough to be vintage, either.

As soon as he finishes breakfast, Nash glances around to see if anyone is listening and leans in close. “Check out the hottie in row two.”

I tilt my head up above the back of the seats and catch a glimpse of tousled, longish brown hair in the left-hand seat. Ducking back down, I ask, “Who is it?” without letting my lips move.

Nash shrugs, and we fan ourselves with our hands. Nash and I have the same taste in almost everything: teachers, music, art, literature, and boys. The good news is we can mock anyone who doesn’t share our aesthetic. The bad news is we have to lay claim to guys we both crush on. There just aren’t that many crush-worthy possibilities in Cedar Ridge.

Nash narrows his eyes at me. We’ve been doing the dibs thing since elementary school, but we didn’t start using it on boys until seventh grade. It’s kind of a running joke with us, this idea that we can have a guy just by claiming him. Never once have any of the crushes reciprocated, but the ritual allows the one with dibs to discuss the object of his or her affection as if romance was a realistic possibility.

“Okay.” I hold my hands up against Nash’s world-famous death stare. “You can have him.” Not a big deal. I’m long past believing in the fairy tale of the handsome stranger who sees past my not-quite-modelesque figure to discover the fabulous Maggie within. After all, that would be some headline: “fat girl snags new guy.” I gaze out the window as the bus turns the corner and rolls along the lakefront. The evergreens still cast long shadows a good distance into the lake from the shore. But starting about thirty feet out, the water glitters with early morning sunlight. I steal another glance at the new guy and cross my fingers that Nash has an actual chance with this one.

When the bus rolls to a stop in the parking lot, we descend into the bustling fray. The kids who drive start streaming in from student parking. I link arms with Nash and move in their direction, hoping to blend into the stream and avoid the shame of being bussies. But Nash stops short, which yanks me to a stop. I look up and see New Guy. He’s a little taller than Nash, with sandy brown hair, tan, freckled skin, and these grass-green eyes casting around for something to hold on to. Nash steers us in his direction, and we come to a halt right in front of him.

“Nash Taylor.” He hooks his thumb in my direction. “Maggie Bower. Welcome to Cedar Ridge,” he adds, releasing my arm and giving a little bow. “This way.” Nash sweeps his arm in front of him, ushering New Guy in the direction of the main building. They start to move off, leaving me alone, the current of students flowing around me.

I’m not sure if I should follow, but as Nash chats up the New Guy, he gives a surreptitious head jerk, the universal sign for “get your ass up here.” New Guy doesn’t seem bothered by Nash’s bossiness or by Nash leading him around. That fact alone is surp...

"The characters here are effectively nuanced, flawed but forgivable as they muddle through teenage conundrums of loyalty and love."

"All of the protagonists . . .are pushed to ask themselves what expectations other people have of them and whether or not they have accepted these as their own. In the end, Maggie and the others become fully realized characters whose actions cannot be predicted by a YA lit algorithm."

"A powerful tale with an emotional rawness that will resonate with readers."

"Dinnison adeptly portrays the rising and falling hopes within an unconventional love triangle. . . . Readers will follow [Maggie] eagerly as she finds her voice and identity."

"Fans of realistic fiction featuring friendship, loyalty, and trust will enjoy this book."

"Firmly at the center stands a protagonist whose likable voice and authentic struggle to accept herself and find love in a world that would rather she shrink back—not to mention her crackling chemistry with Tom—lend this fresh, contemporary romantic comedy considerable appeal." 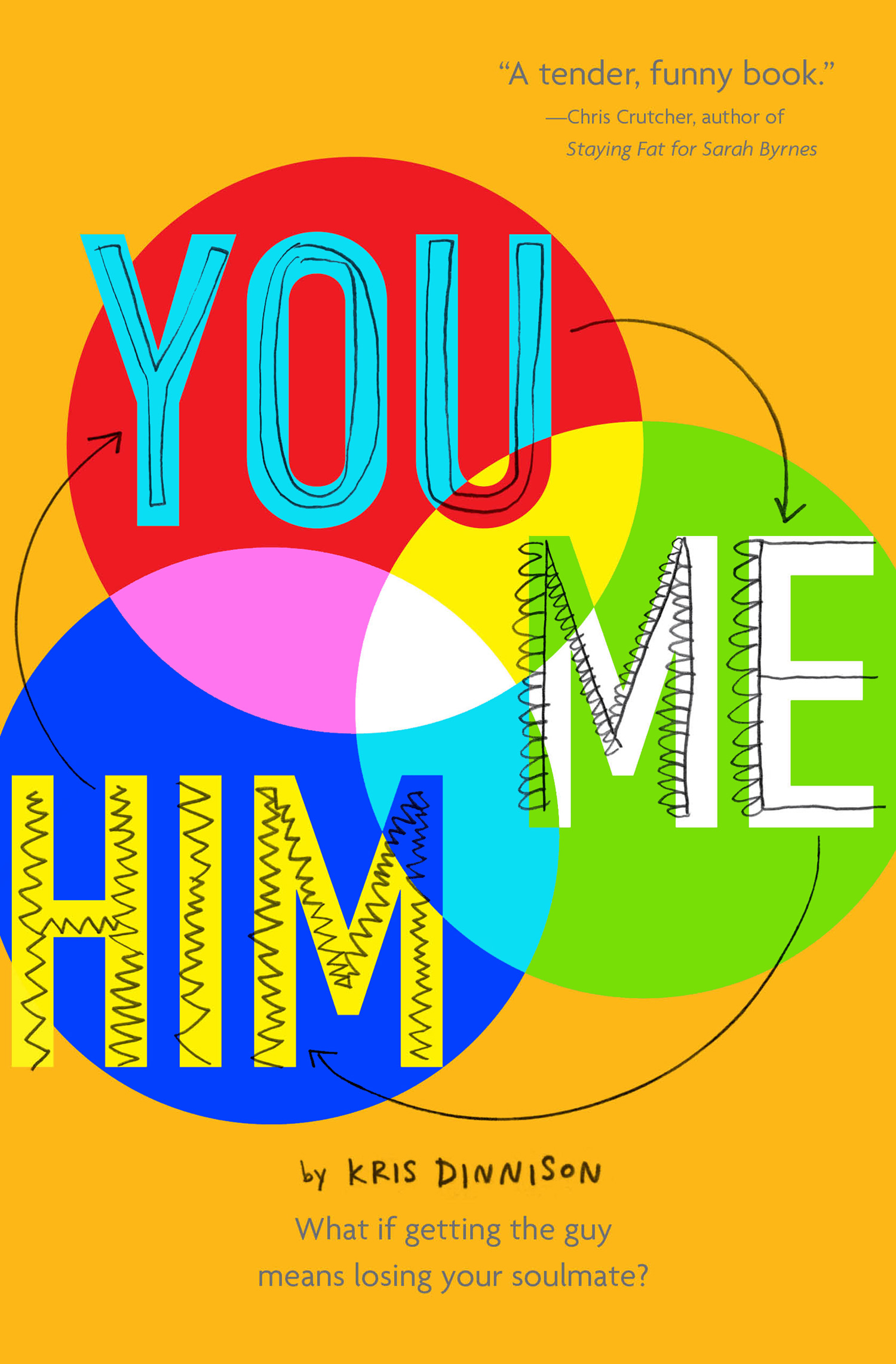