You Call This Democracy?: How to Fix Our Government and Deliver Power to the People

"As we enter into an election year where nothing less than the fate of our republic is at stake, this book is an important read for anyone interested in our politics.”—Hillary Rodham Clinton

All of the challenges facing our democracy today… problems with the electoral college, gerrymandering, voter suppression, lack of representation, voter disinterest, citizens who cannot vote, lobbying, money…lead to two questions: why doesn't every vote really count? And what are we going to do about it?

Author Elizabeth Rusch examines some of the more problematic aspects of our government but, more importantly, offers ways for young people to fix them.

A 2021 YALSA EXCELLENCE IN NONFICTION FINALIST

America is the greatest democracy in the world . . . isn't it? Author Elizabeth Rusch examines some of the more problematic aspects of our government but, more importantly, offers ways for young people to fix them.

The political landscape has never been so tumultuous: issues with the electoral college, gerrymandering, voter suppression, and a lack of representation in the polls and in our leadership have led to Americans of all ages asking, How did we get here?

The power to change lies with the citizens of this great country—especially teens! Rather than pointing fingers at people and political parties, You Call This Democracy? looks at flaws in the system—and offers a real way out of the mess we are in. Each chapter breaks down a different problem plaguing American democracy, exploring how it’s undemocratic, offering possible solutions (with examples of real-life teens who have already started working toward them), and suggesting ways to effect change—starting NOW!

You Can’t Vote for President

Every four years, voters across the country cast ballots to fill the highest government position in the country: president of the United States. They scan the list of candidates and mark a box by their choice, confident that they have had a say in this important decision.

But read the ballot’s fine print, and you might find something like this: “A ballot cast for President and Vice President of the United States is considered a ballot cast for the slate of presidential electors nominated by the political party.”

You don’t vote for president. Someone else does it for you.

Though Americans vote on the first Tuesday in November, the president and vice president are not actually elected then. Instead, every state is allocated a number of people called “electors” equal to the number of the state’s U.S. senators and representatives. For example, New Jersey has two senators and twelve members in the House of Representatives, so the state has fourteen electors.

About a month after the election, the electors meet in their state capitals to cast their votes. Though the electors from all the states never gather in one place, they are traditionally called the Electoral College. Currently, the candidate who receives at least 270 out of 538 possible electoral votes wins the presidency.

This may be the oddest feature of our democracy—that we citizens don’t get to elect our president (or vice president). It’s also the most undemocratic.

This strange system is a relic from a very different time in U.S. history. In 1787, the new citizens of America had little experience electing national leaders. They were used to having a king. In the eighteenth century, when our founders gathered to create our system of government at the Constitutional Convention, they worried that tricky long-distance communication and transportation would make it difficult to properly inform voters about candidacies. They had no telephones, television, or even telegraphs; mail and newspapers were delivered by coach.

These days, we have plenty of experience directly voting for officials—and with television, computers, and the internet, people have access to loads of information about all the candidates and issues.

Another concern at the time was education. Founders thought it prudent to leave the decision to fewer, better-educated citizens. Today, with twelve years of free, public education available to everyone, literacy is near universal in the United States.

Some founders also wanted a backup plan to correct mistakes made by uneducated and unruly voters. Alexander Hamilton wrote that electors would stop someone with “talents for low intrigue and the little arts of popularity” from taking the top office and further prevent “foreign powers to an improper ascendant in our councils.” In other words, Hamilton hoped electors would prevent a popular but corrupt candidate or someone strongly influenced by foreign powers from taking office.

But that is not how electors operate today. Electors are chosen by their political parties for their party loyalty, so they are not likely to vote for the other party’s candidate. In addition, many state laws require electors to vote for the candidate that won that state’s election. Electors have become no more than a rubber stamp for the statewide elections.

When this strange, outdated system works, the winner of the electoral vote and the nationwide popular vote—the actual tally of the citizen’s votes—are the same. But sometimes the system fails, defying the will of the people, awarding the presidency to the loser of the popular vote and putting the election and the effectiveness of our democracy in doubt.

The problem lies in how elections are run at the state level. In forty-eight states and the District of Columbia, the presidential candidate who wins the statewide election gets all of that state’s electoral votes. This is called “winner takes all.” Compare that with a national popular vote, in which we would simply add together citizens’ votes—just like we do for all other elections.

This “winner takes all” approach distorts reality. For example, if a state has ten electors, and a candidate wins 51 percent of the vote, that candidate gets all ten electoral votes. It’s as if the candidate won 100 percent of the popular vote in that state, even though 49 percent voted for the opponent.

These state-by-state distortions can add up. Five times in our short history (1824, 1876, 1888, 2000, 2016), the candidate who won the highest number of citizens’ votes did not take office. Because of our electoral system, the popular-vote winner lost.

This will likely keep happening. In 2016, a study by National Public Radio found that it’s possible for a candidate to win the Electoral College with less than a quarter of the popular vote! Can we really call ourselves a democracy if we hand the most powerful office to candidates who lose the popular vote?

In addition to being sorely out of date, the Electoral College system also leads to statewide recounts. A tight race in just one state can throw an entire presidential election into question. In 2000, the race in Florida came down to 537 votes. It took thirty-five days, with multiple attempts at recounting, and rulings from both the Florida State Supreme Court and U.S. Supreme Court, to settle the question of who would become president. The process left many questioning the outcome of the election.

There have been a few almost-misses too. In 2004, a shift of just sixty thousand votes to John Kerry (D) in Ohio would have cost George W. Bush (R) the election, despite Bush’s 3-million-vote lead nationwide. In 1976, a shift of roughly nine thousand votes in Hawaii and Ohio would have wrested the presidency from Jimmy Carter (D), despite his almost 2-million-vote lead nationally over Gerald Ford (R).

The Constitution also dictates what happens if there is a tie in electoral votes or if no candidate wins a majority—and it’s pretty undemocratic. The decision goes to the U.S. House of Representatives, where each state gets just one vote. That means Wyoming, representing about half a million people, gets the same say as Texas, with its close to 30 million residents. It’s hard to imagine a scenario farther from the principle of one person, one vote.

ONLY A FEW STATES MATTER

Perhaps the biggest problem with our electoral system starts long before any votes are cast. The Electoral College distorts campaigns by focusing the battle for the presidency on a few states rather than on the interests of the whole nation.

It is not the size of the state, the location of the state, or even the number of electoral votes that determines whether candidates care about your vote. It all depends on whether or not you live in a “battleground” or “swing” state, one with fairly eq...

“You Call This Democracy gives us a clear look at the problems we face in our politics today, from voter suppression to gerrymandering to sorting through the noise of partisanship. Most importantly, it provides a road map for how we can come together and use our power as citizens to fix them. As we enter into an election year where nothing less than the fate of our republic is at stake, this book is an important read for anyone interested in our politics.”—Hillary Rodham Clinton

"Fascinating....Like many well-executed books written for smart teenagers, YOU CALL THIS DEMOCRACY? is enlightening for adults as well.”—The New York Times Book Review

★ "Rusch unites a passion for democracy with a belief in the power of young people to help restore it. A riveting must-read."—Kirkus, STARRED review

"[A] sprawling, information-rich exploration of the current state of American democracy."—School Library Journal 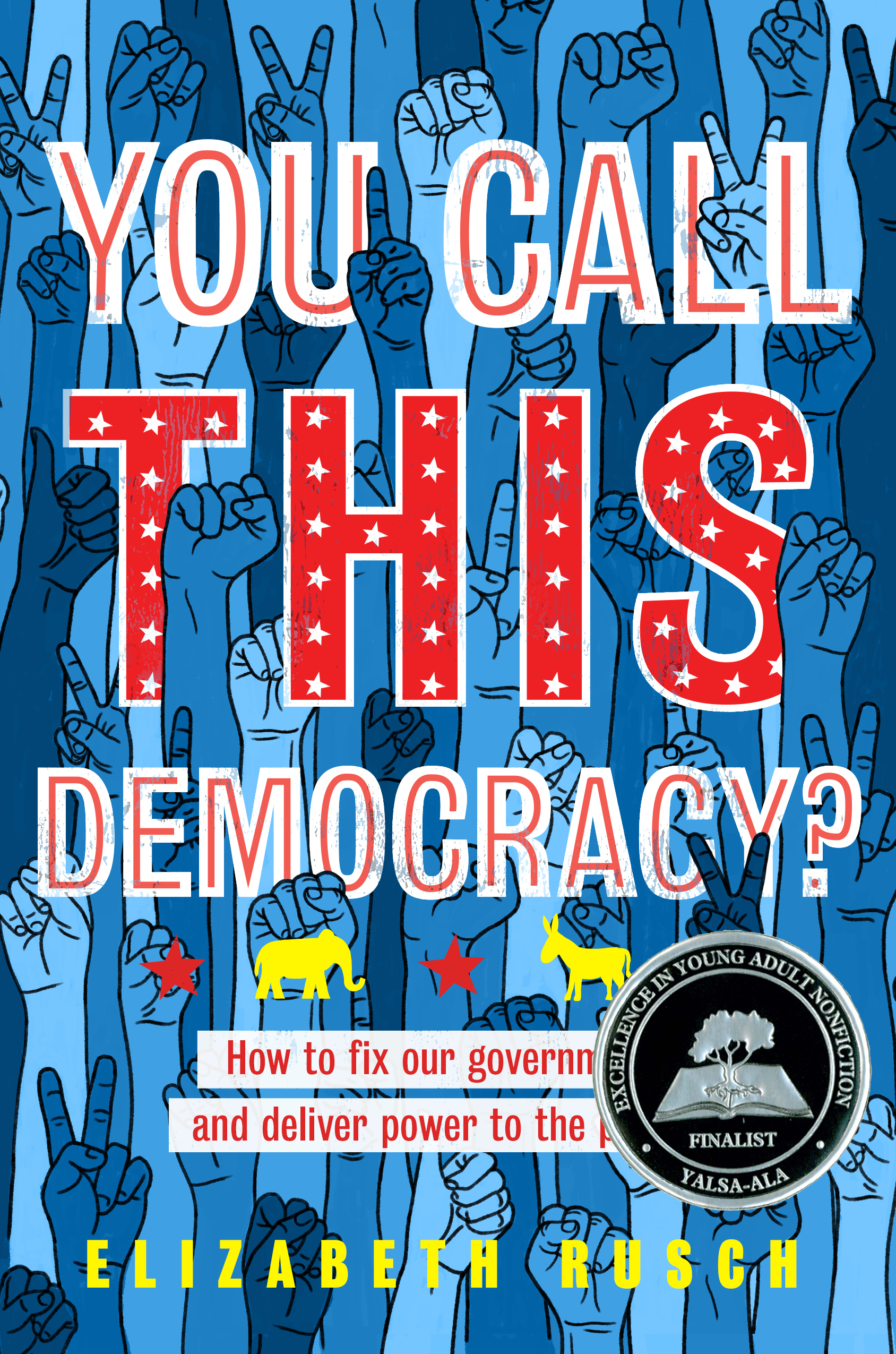