A striking historical fiction YA debut about a wayward girl amid the freaks and sideshows of a late-1930s traveling circus.

About the book
Ladies and gentlemen, boys and girls, step inside Mosco’s Traveling Wonder Show, a menagerie of human curiosities and misfits guaranteed to astound and amaze! But perhaps the strangest act of Mosco’s display is Portia Remini, a normal among the freaks, on the run from McGreavy’s Home for Wayward Girls, where Mister watches and waits. He said he would always find Portia, that she could never leave. Free at last, Portia begins a new life on the bally, seeking answers about her father’s disappearance. Will she find him before Mister finds her? It’s a story for the ages, and like everyone who enters the Wonder Show, Portia will never be the same.
About the author
Hannah Barnaby

Hannah Barnaby holds an MA in Children's Literature from Simmons College and an MFA in Writing for Children and Young Adults from Vermont College. Formerly a children's book editor, she has also worked as a bookseller and a writing instructor. Hannah was the first writer to earn the Children's Writer in Residency at the Boston Public Library. Visit Hannah at hannahbarnaby.com, or follow her on Twitter@HannahRBarnaby or Instagram@hannahbarnaby.

The Banshee of Brewster Falls

Wayward can mean a lot of things. It can mean lost, misled, unfortunate, left behind. That is how the girls at The Home thought of themselves, despite their best efforts to live some other way.

For the inhabitants of Brewster Falls, wayward meant wicked. Dangerous. Trash. And that is how they treated the girls on the rare occasions they showed their faces in town.

Portia was the only one who went on a regular basis—she did the shopping and stopped at the post office for letters and telegrams. She rode the red bicycle and did not cover her long dark hair, and she sang old gypsy songs at the top of her lungs, and she seemed (to the residents of Brewster Falls) like a banshee coming to steal their souls. Mothers would hide their children indoors when Portia came whipping down the road.

They were a fearful group of folks.

Portia loved to torment them. And she loved the red bicycle.

Riding a bicycle was the only kind of freedom for Portia. It was something she thought she’d always known how to do, simply because she couldn’t remember learning, couldn’t place the first time she’d done it. Like laughing. Or eating an apple. It was so utterly normal that it didn’t even require thought. Settle onto the seat. Push off, pedal, right left right left right. Hold the handlebars steady. Watch the road ahead, to avoid cars and potholes and squirrels, but don’t look too hard at anything. She could almost get out of her body, almost pretend she was entirely somewhere else.

That was the freedom she loved. That was why she had worked so hard to convince Mister to let her take the trips to town, because it afforded her the luxury of time alone on her bicycle.

Only it wasn’t her bicycle—it was Mister’s. It had been his since a Christmas morning once upon a time, when a little boy who would grow up to be Mister had tumbled out of bed and found a string tied to his left big toe, a string that he untied and followed out of his room, through the upstairs hallway to the stairs, down the stairs (unwinding it carefully from the banister), through the dining room, into the kitchen (such a long string!), and through the side door, which he opened to find a shiny red Journeyman five-speed leaning against the porch rail.

Was he happy? Did he gasp with delight? Or did he stand there with a hand full of string and think, They don’t know me at all?

Begin at the Beginning

Stories came easily to Portia. Lies came even more easily, and more often. The difference was in the purpose. The stories taught her to imagine places beyond where she was, and the lies kept her out of trouble. Mostly.

Portia’s first audience, for lies and stories both, was her father. Her mother had never had the ear for tales of any kind, nor the patience to listen, and she was long gone by the time Portia could tell a tale. A lean, restless woman, Quintillia surprised no one with her departure, and the family quickly closed the space she had occupied like the ocean fills a hole in the sand. They did not speak of her. If they ever thought of her, it was in silence.

And so it was Max, her father, who listened to Portia talk, talk, talk. Out the door, around the house, all the way to the woodpile and back, the sound of Portia’s voice trailed Max like an echo. She had an uncanny way of matching her rhythms to his, tailoring her stories to his moods and whatever task he worked on while she talked. They were stream-of-consciousness ramblings at first, retellings of the fairy tales Portia heard from her gypsy tribe of relations, all of whom lived within spitting distance of her bedroom window and congregated nightly in Aunt Carmella’s kitchen on the other side of the vegetable garden. Portia did not have to leave her room to hear them speaking at night—they knew she was there and projected their voices accordingly. She made the stories her own, chopped them up and clapped them back together in new formations, putting the enchanted princess in the loving embrace of a villainous wolf, marrying the charming prince to the wicked witch and giving them a brood of dwarfs to raise as their own.

Sometimes Portia would have so many storied roads in her head that she would struggle to choose just one path. "Papa," she said, "I can’t tell where this story begins."

"Begin at the beginning," he told her.

These were the earliest days Portia would remember later. Trying to think past them, to drill into her younger selves and mine them for memories, she could get only as far as the view from that bedroom window, the sound of her shadowed aunts and uncles laughing, telling tales, and singing songs about women Portia knew not to repeat in polite company.

These were the days before the money dried up and the dust took over, before the jobs and houses were lost, before her tribe disbanded and went away like seeds on the wind, hoping to find a place where they could land safely.

As her family trickled away, Portia replaced the stories they had told with stories of her own. She didn’t like the feeling of their words in her mouth anymore; besides, the details began to fade, and it seemed her father smiled only when she told her own tales.

"There are creatures that dance outside my window at night," she told him, "and they are very fat. They have wings, but they cannot fly because their wings are too small."

"What do they want?" asked Max.

"To fly," said Portia. "They want to fly, more than anything."

"What are their names?" asked Max.

The only names Portia knew were the names of her lost relatives. She had not been to school. She did not have friends or know anyone who was not her family. She was five years old.

"Their names are Carmella and Joseph and Anthony and Oscar and Elena and . . ." Then she stopped because a tear pushed itself out of Max’s eye, and the sight of it rolling down her father’s face made Portia feel that she had done something very wrong.

"Because our family is gone," he said. "I didn’t think they could fly, but they did."

Portia put her hand into her father’s coat pocket, where his own hand rested like a nesting bird. "If they flew away, they can fly back," she said.

Max shrugged. "Or we will fly away, too."

Of course Portia thought we included her.

She was five years old.

Nominated for the William C. Morris YA Debut Award

"Broken but resilient, Portia is a sympathetic heroine whose simple, unadorned need for love and acceptance will be immediately recognizable to any young reader."

"This will appeal to readers looking for something a bit different than most YA fare."

"Through skillful description, the dreariness of the Home and the fantastical nature of the carnival world comes vividly to life."

"This predominantly third-person narration is richly textured with psychological tension, complex characterization, a vivid setting, and a suspenseful plot . . . one will be spellbound by this intriguing reading experience."

* "Infused with nostalgia and affection, this celebration of the deliberately constructed self will hold readers in its spell from beginning to end." 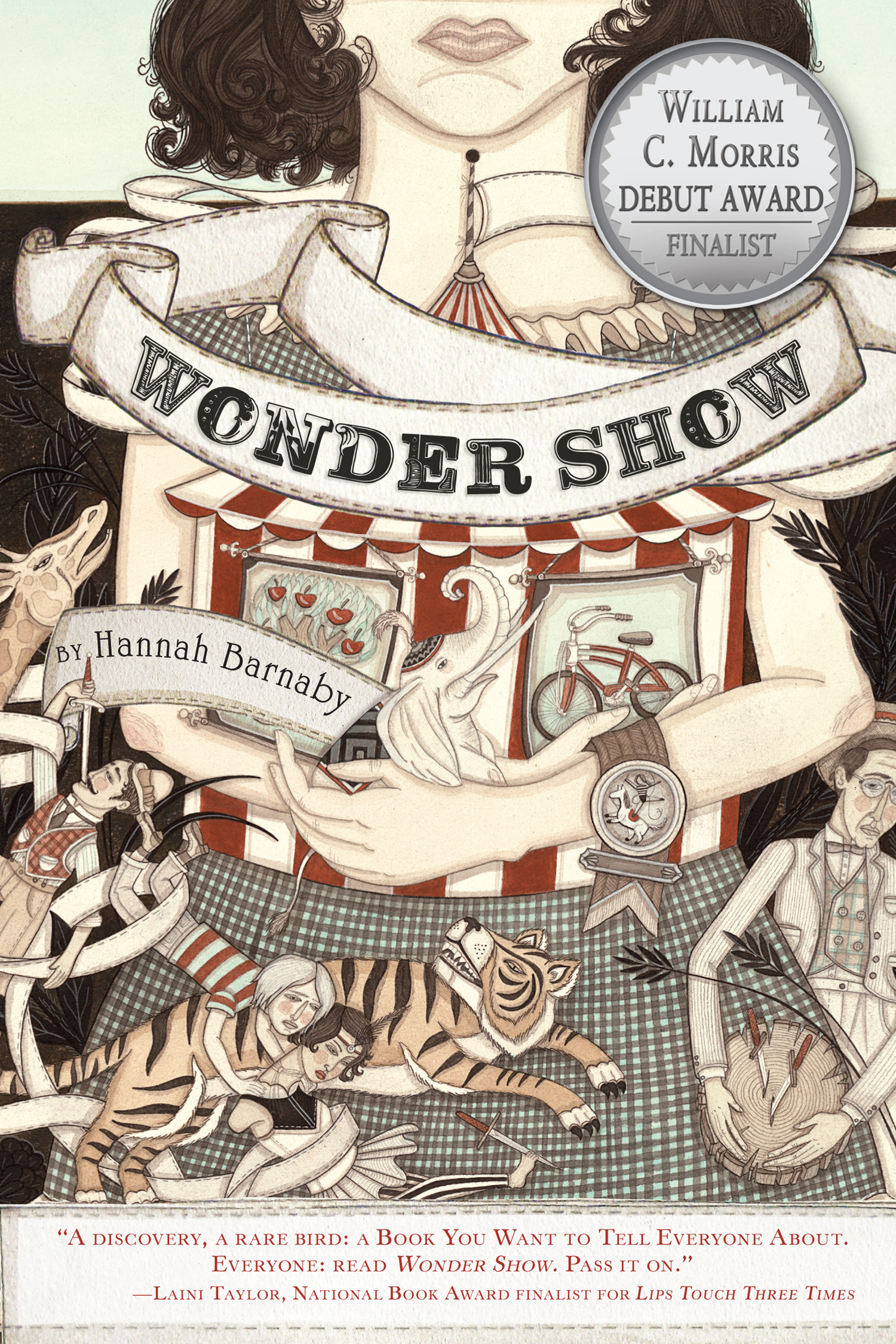