Women Who Don't Wait in Line: Break the Mold, Lead the Way

New York City Deputy Advocate Reshma Saujani asks why women, in an era where they are told they can do anything, still haven’t joined the top ranks of corporations or government. Saujani charts the paths of accomplished women, encouraging all women to take risks, compete, embrace failure, and build support through a twenty-first-century sisterhood.

About the book
There’s never been a better time to be woman. We live in an era when girls are told they can do anything. So why aren’t we seeing more women rising to the top ranks of corporations and the government? Why don’t our girls have more women in leadership roles to look up to?

Women Who Don’t Wait in Line is an urgent wake-up call from politico and activist Reshma Saujani. The former New York City Deputy Public Advocate and founder of the national nonprofit Girls Who Code argues that aversion to risk and failure is the final hurdle holding women back in the workplace. Saujani advocates a new model of female leadership based on sponsorship—where women encourage each other to compete, take risks, embrace failure, and lift each other up personally and professionally.

Woven throughout the book are lessons and stories from accomplished women like Susan Lyne, Randi Zuckerberg, Mika Brzezinski, and Anne-Marie Slaughter, who have faced roadblocks and overcome them by forging new paths, being unapologetically ambitious, and never taking no for an answer. Readers are also offered a glimpse into Saujani’s personal story, including her immigrant upbringing and the insights she gleaned from running a spirited campaign for U.S. Congress in 2010.

Above all else, Women Who Don’t Wait in Line is an inspiring call from a woman who is still deep in the trenches. Saujani aims to ignite her fellow women—and enlist them in remaking America.
About the author
Reshma Saujani

RESHMA SAUJANI is the former NYC Deputy Public Advocate and the founder of Girls Who Code, a nonprofit that prepares underserved girls for careers in science and technology. She ran for U.S. Congress in New York’s 14th District as a Democrat in 2010.

In January 2010, when I officially announced my decision to run for Congress, so many years after first having dreamed the idea, I expected to feel an overwhelming sense of relief and excitement.

Instead, to my surprise, I was racked with anxiety. Heart-pounding, ear-buzzing, stomach-churning anxiety. Often, as I was heading to important meetings, I’d find myself in a cold sweat.

Why, now that I was doing what I’d always wanted, was I feeling so panicked? It wasn’t that I questioned my own commitment — I wanted this job to make a difference more than anything. But nagging voices of self-doubt were echoing in my hand. Critics were charging that I was too young, too new, too different, too inexperienced. I got bogged down in how others saw me, and started losing sight of myself. What if I flubbed a policy question? Would I be dismissed as a lightweight? Did I have the chops, the smarts, the skills to handle this job?

In retrospect, my insecurities seem unwarranted. Sure, I was younger than my opponent — but, at thirty-four, hardly a fledgling. After all, there are numerous examples of even younger men who have been elected to the House of Representatives. For example, Aaron Schock, who at twenty-seven ran and won an election to represent Illinois’s Eighteenth Congressional District in 2009.

As for being a lightweight, I had a master’s degree in public policy from Harvard and a law degree from Yale. And I wasn’t a newbie to the political world: I had a decade of campaign experience working on presidential and local elections, and I had seen scores of candidates go through the firing squad of dense policy questions, so I knew what to expect. I’d been a civic activist, organizing young people and communities of color since I was thirteen years old. But in the moment, instead of focusing on all the things I knew that I knew, I stressed about what I didn’t know. Instead of feeling confident in who I was, I fretted about who — and what — I was not.

To manage my anxiety, I obsessed over my stump speech. The speech became a symbol of something I could control and perfect and use to mitigate my chances of losing the race. I convinced myself that if I could memorize the lines, and gracefully deliver each word, then somehow that polished performance would smooth over any perceived flaws. I spent hours in front of the computer, watching speech after speech on YouTube, trying to discern the secrets of great orators like Eleanor Roosevelt or Benazir Bhutto. I imagined delivering the speech in my head, over and over again. The perfect speech was going to become a stand-in for a perfect me.

On the day of a speech, I would pace up and down the length of my apartment, clutching the script, rehearsing my arguments before the empty room. Then, at game time, I would take a crumpled sheet of speech notes with me, keeping them at the podium, in a pocket, or in my purse, like Linus’s security blanket — a safeguard against the prospect that I might forget an important line.

My communications director kept scolding me for obsessing about memorization. “It isn’t how you say it,” he’d argue. “It’s what you have to say.” It took time for his words to sink in, but I finally came around.

By the end of the campaign trail, I had tossed the cheat sheet. No more trying to adhere to a faultless script. I spoke from the heart — about who I was, what I believed, and what I would do for my community if elected. I stopped trying to be perfect and just started to be me: all of me, even the part of me that occasionally fumbles words, trips over my tongue, or sometimes sounds inelegant. And I ultimately learned that having confidence in myself — believing that I was prepared enough, smart enough, and strong enough — was not only empowering, but it was also a self-fulfilling prophecy. I became these things. And confidence is also infectious, because that’s when my campaign took off. That’s when other people became passionately drawn to our call for change.

Women tend to underestimate their own abilities, while men tend to overestimate theirs. This phenomenon even affects women who have managed to overcome their insecurities, taken professional risks, and are at the height of their careers.

Women are taught to be risk-averse. Starting at young age, we are taught to stay off the monkey bars, stay in the shallow end — with the result that too often, we prepare and prepare instead of boldly pursuing our dreams. Women take classes on everything from how to start a business to making investments, while men just forge ahead. Maybe that’s part of the reason why women seem stalled in the corporate hierarchy; why, even as there has been an explosion of women in management positions, so few are making it all the way to the top. And why, when women get to the top, they stay there, instead of taking even more risks to get to the next leadership level.

Take, for example, Virginia M. Rometty, who became CEO of IBM in January 2012. Rometty is outspoken about the importance of her willingness to take both personal and professional risks. She attributes her career success to “experiential” learning and her willingness to try to learn from new things. Nonetheless, the New York Times reported that when Rometty was offered the “big job,” she felt she lacked experience and would need time to consider the position.1

When she discussed the offer with her husband, he asked her, “Do you think a man would have ever answered that question that way?”

Rometty realized that not only was she qualified and ready for the job, but it was exactly the kind of challenge she needed to push herself even further. “People are their first worst critic, and it stops them from getting another experience,” she observed. It’s a vicious cycle: women give themselves more time to improve their skills, to gain one more qualification, and, as a result, they may pass up that promotion and the challenges that come with it, which is exactly what they need to grow professionally. According to Rometty, “Growth and comfort do not coexist.”2

Never hide. Learn by doing. I did not become a better speaker, and ultimately a better candidate, by waiting to ripen like fruit in a brown paper bag. I evolved by stepping out into the world and responding to the cues and feedback around me. I learned how to run for office by running for office. I learned how to be a compelling public speaker by speaking publicly. I evolved by taking big risks in pursuit of a big goal, knowing fully that I might fail.

Anxiety about whether we’re ready for the big challenge is a recurring theme and often leads women down the road of endless preparation, the pursuit of perfection, and the desire to prove we can do the job before we even dare to apply. My obsession with memorizing my stump speech fell into this category. I didn’t want to screw up or flub my first impression with voters. I was afraid that if I stumbled in my speech, the audience would conclude I wasn’t smart — and that, by the same token, a perfect delivery would be equated in their minds with a perfect candidate. So I practiced and practiced, rehearsed and rehearsed, and almost drove myself nuts in the process. 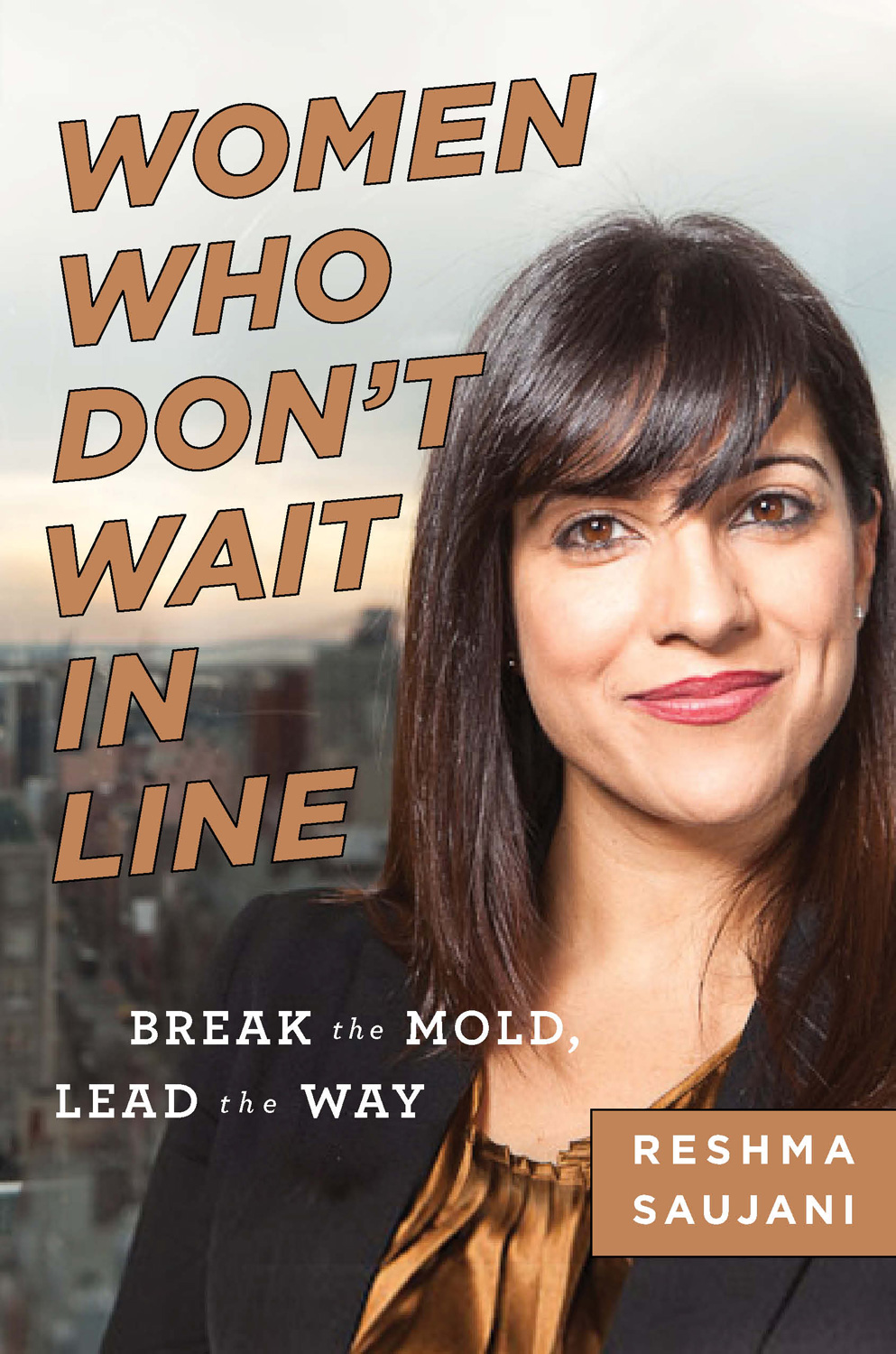