Wizard's Holiday: The Seventh Book in the Young Wizards Series

by Diane Duane and Larry Rostant
$8.99

The seventh book in the Young Wizards series--now in paperback!

Rest and relaxation--that's what Nita thinks she's going to get when she and her partner-wizard Kit go on a wizardly "cultural exchange" program. But nothing about wizardry--not even vacation--is ever quite that simple!

About the author
Diane Duane

DIANE DUANE is the author of nearly fifty science fiction and fantasy novels, including ten books in the Young Wizards series. Four of her Star Trek novels have been New York Times bestsellers, including Spock's World. She lives with her husband in rural Ireland. Visit her online at www.DianeDuane.com and www.youngwizards.com.

It was the Friday afternoon before the start of spring break. The weather was nothing like spring. It was cold and gray outside; the wind hissed unrepentantly through the still-bare limbs of the maple trees that lined the street, and in that wind the rain was blowing horizontally from west to east, seemingly right into the face of the girl, in parka and jeans, running down the sidewalk toward her driveway. Except for her, the street was empty, and no one looking out the window of any nearby house was close enough to notice that the rain wasn't getting the young girl wet. Even if someone had noticed, probably nothing would have come of it; human beings generally don't recognize wizardry even when it's being done right under their noses.

Nita Callahan jogged up her driveway, unlocked the back door of her house, and plunged through it into the warmth of the kitchen. The back door blew back and slammed against the stairwell wall behind her in a sudden gust of wind, but she didn't care. She pushed the door shut again, then struggled briefly to get her backpack off, flinging it onto the kitchen counter.

"Freedom!" she said to no one in particular as she pulled off her jacket and tossed it through the kitchen door onto the back of one of the dining room chairs. "Freedom! Free at last!" And she actually did a small impromptu dance in the middle of the kitchen at the sheer pleasure of the concept of two weeks off from school...though the dancing lasted only until her stomach suddenly growled.

"Freedom and food," Nita said then, and opened the refrigerator and stuck her head into it to see what was there to eat.

There was precious little. Half a quart of milk and half a stick of butter; some small, unidentifiable pieces of cheese bundled up in plastic wrap, at least a couple of them turning green or blue because of the presence of other life-forms; way back in a corner, a plastic-bagged head of lettuce that had seen better days, probably several weeks ago; and a last slice of frozen pizza that someone, probably her sister, Dairine, had left in the fridge on a plate without wrapping it, and which was now desiccated enough to curl up at the edges.

"Make that freedom and starvation," Nita said under her breath, and shut the refrigerator door. It was the end of the week, and in her family, shopping was something that happened after her dad got home on Fridays. Nita went over to the bread box on the counter, thinking that at least she could make a sandwich-but inside the bread box was only a crumpled-up bread wrapper, which, she saw when she opened it, contained one rather stale slice of bread between two heel pieces.

"I hate those," Nita muttered, wrapping up the bread again. She opened a cupboard over the counter, pulled down a peanut butter jar, and saw that the jar had been scraped almost clear inside. She rummaged around among various nondescript canned goods, but there was no soup or ravioli or any of the faster foods she favored-just beans and other canned vegetables, things that would need a lot of work to make them edible.

Nita glanced at the clock. It was at least half an hour before the time her dad usually shut his florist's shop on Fridays and came home to pick up whoever wanted to go along to help do the shopping. "I will die of hunger before then," Nita said to herself. "Die horribly."

Then she glanced at the refrigerator again. Aha, Nita thought. She went to the wall by the doorway into the dining room and picked up the receiver of the kitchen phone.

She dialed. The phone at the other end rang, and after a couple of rings someone picked up. "Rodriguez residence..."

Behind the voice was a noise that sounded rather like a jackhammer, if jackhammers could sing. "Kit? How'd you beat me home?"

"My last-period study hall was optional today...I was finished with my homework so I went home early. What's up?"

"I was going to ask you that," Nita said, raising her voice over the racket. "Is your dad redoing the kitchen or something?"

She heard Kit let out an exasperated breath. "It's the TV."

"It's acting up again?" Nita said. Kit's last attempt to use wizardry to repair his family's new home entertainment system had produced some peculiar side effects, such as the TV showing other planets' cable channels without warning.

"Neets," Kit said, "it's worse than just acting up now. I think the TV's trying to evolve into an intelligent life-form."

Nita's eyebrows went up. "That could be an improvement..."

"Yeah, but evolution can have a lot of dead ends," Kit said. "And I'm getting really tempted to end this one with a hammer. The TV says it's meditating...but most things get quieter when they meditate."

"Uh-oh," something inside Nita's house also said, like an echo. She glanced around her but couldn't figure out what had said it. Weird..."Kit," Nita said, "I'm dying here. You saw what lunch was like today. Nothing human could have eaten it. Mystery meat in secret sauce again."

"Fridays are always bad in that cafeteria," Kit said. "That's why I eat at home so much."

"Don't torture me. What's in your fridge?"

There was a pause while Kit walked into his kitchen, and Nita heard his refrigerator door open. "Milk, eggs, some of Carmela's yogurt drinks, beer, some of that lemon soda, mineral water, half a chocolate cake, roast chicken-"

"No, I mean half a chicken. Mama made it last night. You've had this recipe before. She rubs it with this hot-smoked paprika she gets from the gourmet store, and then she stuffs it with smoked garlic, and then she-"

Nita's mouth had started to water. "You're doing this on purpose," she said. "Let me raid your fridge."

"Hey, I don't know, Neets, that chicken breast would be pretty good in a sandwich with some mayo, and I don't know if there's enough for-"

He snorted with laughter. "You really need to get your dad to buy more food when he shops," Kit said. "You keep running out on Friday. If he'd just-"

"Yeah, thanks. Keep everybody out of the fridge for five minutes. See you later, bye!"

Nita hung up, then stood for a moment and considered her own refrigerator. "You know what I've got in mind," she said to it in the Speech.

And you keep having to do it, the refrigerator "said." Being inanimate, it wasn't actually talking, of course, but it still managed to produce a "sound" and sensation that came across as grumpy.

"It's not your fault you're not as full as you should be, come the end of the week," Nita said. "I'll talk to my dad. Do you mind, though?"

It's my job to feed you, the refrigerator said, sounding less grumpy but still a little unhappy. But in a more usual way. Talk to him, will you?

"First thing. And, in the meantime, think how broadening it is for you to swap insides with a colleague every now and then!"

Well, I guess you've got a point, the refrigerator said, sounding more interested. Yeah, go ahead...

Nita whistled for her wizard's manual. Her book bag wriggled and jumped around on the counter as if something alive were struggling to get out. Nita glanced over and just had time to realize that only one of the two flap-fasteners was undone when the manual worked its way out from under the flap and shot across the kitchen into her hand. 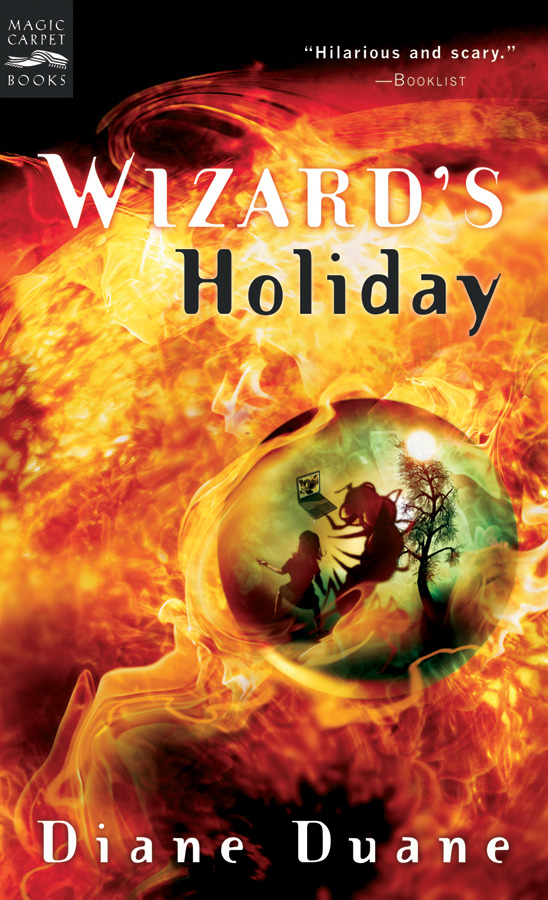