Willy Maykit is stranded on Planet Ed during a class trip to outer space. But will he be able to outwit the monsters inhabiting Ed and find his way back home?

Earth-dwelling fourth-grader Willy Maykit couldn’t be more excited about his school field trip to Planet Ed. Willy’s class will blast off for the afternoon, learn about outer space, and be home in time for dinner. But when he wanders off on his own, Willy ends up being left behind on Ed! Can Willy, along with his classmate Cindy and an alien boy named Norp, outsmart the big hungry monsters on Ed until someone rescues them? With a little help from an android who likes knock-knock jokes and a seagull with terrific aim, they just might!

About the author
Greg Trine

Greg Trine is the author of the Adventures of Jo Schmo series and the Melvin Beederman, Superhero series. He lives with his family in Ventura, California. gregtrine.com.

James Burks is an illustrator of picture books and graphic novels as well as an animator of movies and television shows. He lives in Valencia, California. www.jamesburks.com.

When Willy Maykit was three years old, his father went on an African safari and came home with amazing stories of lions, tigers, and bears. Or at least lions, elephants, and hippos. There are no tigers or bears in Africa. But they’re doing fine in the elephant and hippo department.

Mr. Maykit was a bigtime scientist and an even bigger-time explorer. “There’s a whole world out there, Willy,” he often said. “There’s always something interesting around the next bend.”

Willy didn’t know what his father was talking about. He was only three. He thought Bend was the name of a town in Oregon.

The following year, Willy’s dad went on an Arctic safari and came home with stories of polar bears, walruses, and icebergs.

Then there was a trip to the Antarctic, followed by more stories, and more talk about what was lurking around the next bend.

One year Mr. Maykit journeyed to the bottom of the ocean and saw sea creatures twenty feet long. He saw giant squids and enormous sharks.

This went on and on, one amazing journey after another, including a trip to Mars, and another to . . . uh . . . Uranus.

And then, when Willy was eight years old, his father wandered into the Amazon jungle. He was never seen again.

Maybe he was swallowed by a giant anaconda, Willy thought. Maybe he fell into a river and was gobbled up by piranhas. Maybe he was captured by headhunters.

You never hear about foothunters. They’re that sneaky.

What happened to Mr. Maykit? No one knew.

And Willy began to realize what his father had meant when he said there was always something interesting around the next bend. This happened one day when he rounded a corner, which is a lot like rounding a bend, and practically smacked right into Cindy Das. Cindy Das, who just happened to be the prettiest girl in class.

Willy opened his mouth to say, “Excuse me, Cindy.” But what came out was “Mumble, mumble, mumble.”

So he tried again. He wanted to say something like, “Have a good weekend, Cindy.” But what came out was “Mumble, mumble, mumble.”

Willy couldn’t get his mouth to work properly, not with Cindy standing right there, staring at him with her almost-smile.

“You make me laugh, Willy Maykit,” she said, and she walked away.

“Dad was right,” Willy said to himself. “There really is something interesting around the bend.”

It was what his father had been saying all along. There was a whole world out there, waiting to be discovered. And right then, standing on the corner, watching Cindy head down the street, Willy decided it was up to him to pick up where his father had left off. After all, being an explorer was in his blood.

So when Willy heard the news about the class field trip to Planet Ed, he jumped at the chance. He actually stood up from his desk and jumped.

“Is there a problem, Mr. Maykit?” Mr. Jipthorn asked. Mr. Jipthorn was Willy’s teacher. He was also the tallest person Willy had ever seen. Long arms, long legs, long fingers, long underwear. Well, he probably had long underwear. Even many of the stories he told were tall tales.

“Willy, is there a problem?” he asked again. Students didn’t just jump out of their chairs for no reason. Not unless they had to use the bathroom. Or maybe had an ant roaming around in their shorts.

“Just excited about Planet Ed.” Willy couldn’t help himself. There were probably lots of bends on Planet Ed. There was not only a whole world out there—there was also a whole universe.

But wait a second. Wasn’t Planet Ed far away? Very far away? Normally they didn’t allow fourth-grade field trips outside the solar system, but someone had just donated a Starlite 3000 to the school, complete with an android pilot. As you probably know, the Starlite 3000 is the fastest ship in the sky. It’s also the safest, and thus the perfect vehicle for fourth-grade field trips.

The problem would be getting permission to go. Mrs. Maykit had lost her adventuring husband. She probably didn’t want an adventuring son. She might not understand the concept of things lurking around bends, and that exploring the universe would be even more interesting than exploring the world.

With this thought, Willy sat back down. He really wanted to boldly go where no fourth-grader had gone before, but what if his mom wouldn’t let him?

Mr. Jipthorn started passing out permission slips. “Get these signed or you won’t be going on the field trip,” he said. “And trust me, you don’t want to miss this trip.”

Willy sure didn’t. For the rest of the day, he sat at his desk wondering what to do. How could he get his mother to sign the permission slip?

And then, right before the bell rang, it came to him. Today was Friday. Friday was bring-lots-of-paperwork-home-to-have-your-parents-sign day. There were hot-lunch order forms, and recess-monitor forms, forms for the school play, music-lesson sign-up sheets, bake-sale sheets . . . and right in the middle of it all, Willy placed the permission slip for the class field trip to Planet Ed.

It was the best plan he could come up with: Overload his mother with so much information that she wouldn’t stop and read the fine print.

After school, Willy raced home. “Hi, Mom,” he said, throwing his backpack on the couch. Then he pulled out the stack of papers and placed them on the dining room table.

“How was school?” his mother asked.

“Fine.” He pointed to the table. “Got some papers for you to sign.”

Willy yawned. “Boring school stuff.” Then he headed to his room, keeping his fingers crossed.

Willy’s bedroom was in the attic, because it had the best view in the house. From there he could see the landing strip where his father had landed his plane. He could also see the harbor, in case his father was returning by boat.

Please don’t read the fine print, Mom, Willy said to himself as he climbed the spiral staircase to the attic. I really want to go to Planet Ed.

"The cartoon-style illustrations are amusing and plentiful and will attract reluctant and enthusiastic readers alike."

"Readers new to chapter books and who like to laugh often will most likely find Willy's story peppered with just enough silly humor to keep the pages turning. "

"Effortlessly diverse in open, friendly ways...the two stories of bold adventurers headed back toward home are exhilarating. Readers seeking a speedy space thrilled and fans of Trine's other series will be well pleased with this outing." 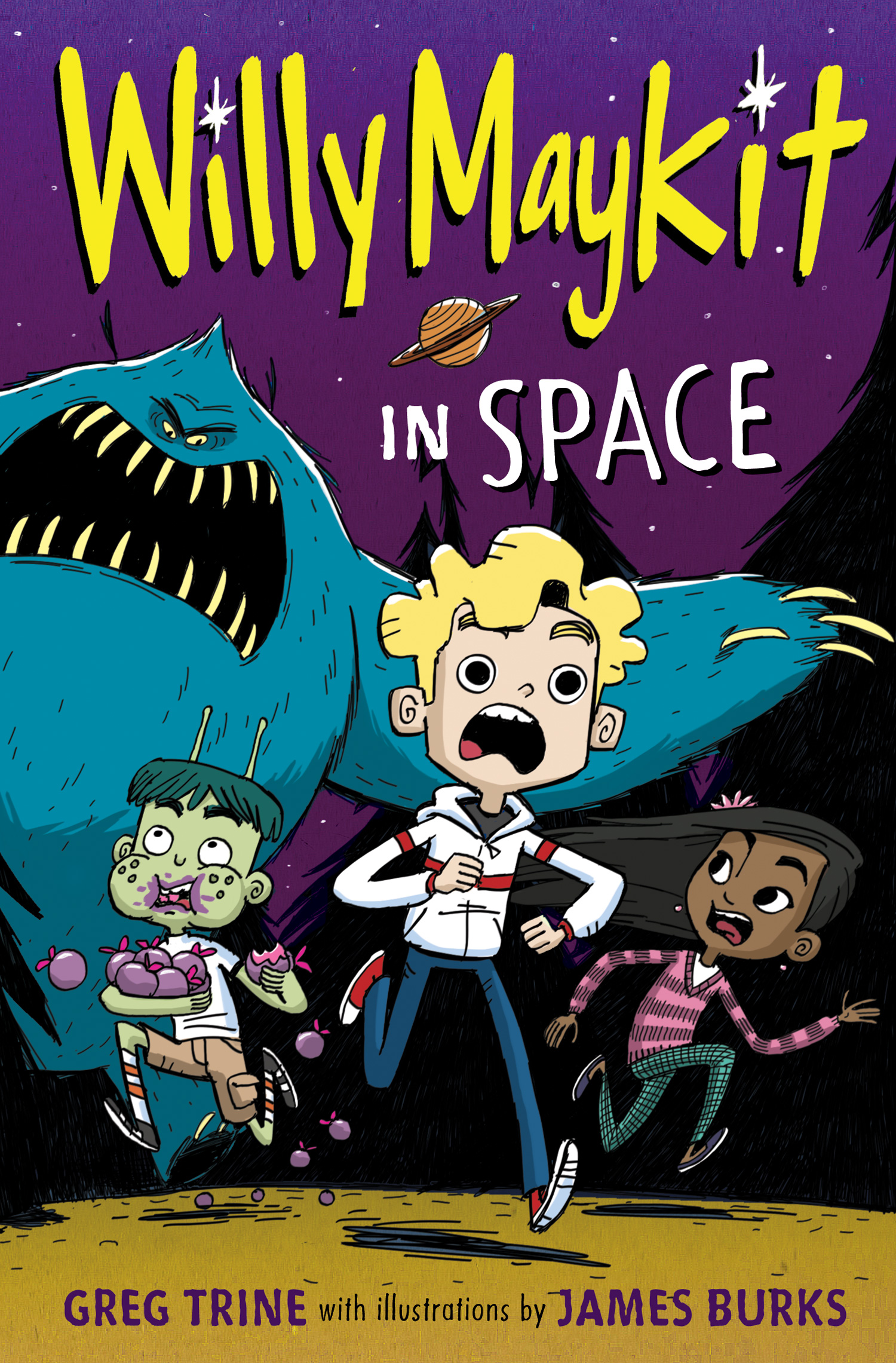