Two New Hampshire teenagers fall into an unlikely relationship as they come together to save a mistreated dog. Whippoorwill is a deeply poignant story about the virulent nature of abuse and the power of human empathy.

“Unexpected, generous, and poignant.”  —Huntley Fitzpatrick, author of What I Thought Was True

Sixteen-year-old Clair Taylor has neighbors who are what locals call whippoorwills, the kind of people who fill their yards with rusty junk. Clair tries to ignore her surroundings, choosing instead to dream of a future beyond her rural New Hampshire town. But, when a black dog named Wally is chained up to a pole next door, Clair can’t look the other way. Clair decides to save Wally, and the immediate connection she has with the lovable dog catches her off-guard, but even more surprising is her bond with eighteen-year-old Danny Stewart, the boy next door.

About the author
Joseph Monninger

Joseph Monninger is an English professor and New Hampshire guide. He is the author of the young adult novels Finding Somewhere, Wish, Hippie Chick, and Baby. He also writes fiction and nonfiction for adults. Visit him at joemonninger.com.

At night I could always hear him.

He turned on his chain, trying to find a comfortable spot, and you heard a moment of quiet as if the whole world waited to see what he would do. Then the chain chinked just a little and you could hear him huff and then fall into his dog box, the heavy thump of his body on the boards, the chain lifting a notch to accommodate his neck.

Sometimes he whined and I could hardly stand it.

It turned minus thirty one night and he still stayed outside.

“It’s New Hampshire and it’s late February,” my dad said. “What do you expect?”

He sat at the kitchen table fooling around with his motorcycle parts. He had his big beard then, his winter beard, and he hardly had cheeks for all the whiskers. He wore a quilted flannel shirt and red suspenders. A pair of tortoiseshell glasses from Walmart perched on the end of his nose so he could see one of the parts.

“He shouldn’t be outside,” I said, looking out the door at the porch thermometer.

“That’s no way for a sixteen-year-old girl to talk, Clair. We can’t judge other people so easily.”

“All things die,” he said, not looking my way.

He meant my mother, I knew, but he was being poetic.

That night, in the cold, I threw some leftover breakfast sausages to Wally. They landed close enough to his pole so that he could get them, but he didn’t even respond. The snow had covered his back legs, and for a long time I stood watching, trying to tell if he had frozen to death. He looked back at me. His two nostrils streamed puffs of white air. White air, white night, white moon.

A dog is a social animal. Tying a dog out on a pole by himself is about the cruelest thing you can do to a canine. Dogs live in packs and some scientists say they care more about other members in their pack than they do about humans. They only care about humans if you become one of their pack.

Instead of tying a dog out by himself, it would be kinder to shoot him.

My bedroom looks out on the Stewarts’ property. I could see over the stockade fence that separated our cruddy yards, and I watched Wally from the time he arrived in mid-February. The Stewarts are what people in New Hampshire call Whippoorwills. It’s a north country name for trash hounds. The Stewarts have at least five cars in their backyard in various states of disrepair, two half-beat Farmall tractors, both spotted orange, a snowmobile so rusted, it looks like it wants to grow into the earth, an aboveground swimming pool that has collapsed on the north end so that it lies crushed and broken and useless, a trampoline that works, a stumpy white pine, at least five truck axles, and a dozen chicken pens, built above ground to house rabbits and a couple of guinea hens.

Wally was one more piece of junk.

We aren’t much better.

My dad, John T. Taylor, is a wannabe biker. He has a Harley Softail, which, if you know anything about motorcycles, is supposed to be a big deal. He rides with a pack of guys called the Devil’s Tongue, and they aren’t as tough as they’d like to be, but they can intimidate the local New Hampshire people when they thunder up and down Route 25. You can feel them in the ground when they pass, and they always remind me of locusts or buffalo when I see them traveling. If you know who they are, though, they don’t scare you a bit, because you understand my dad, for instance, is a heat and plumbing guy, and the Devil’s Tongue leader is a little weirdo named Jebby. Jebby looks like a rhinoceros, all shoulders and neck, except he is only five foot four and pigeon-toed. Jebby is a rural mail carrier, which means he drives around on dirt roads shoving mail into boxes. He has a blinking light on his Jeep, and he eats turkey sandwiches at the same highway turnout every day of his working life at 12:10 sharp. That’s where my dad sometimes finds him to talk about rides. The other guys are more or less the same, tradesmen and grease guys, and you can’t be around them without understanding they sort of like the idea of being in a motorcycle gang, but they could never commit to being in a real one like the Hells Angels or the Iron Horsemen. After Mom died about three years ago, the motorcycle became more central in my dad’s life, and he’s always working on it, one way or the other, with the small kitchen television blasting and the breakfast table covered with newspapers and machine parts. Jebby comes by sometimes, and so do some of the others, and what they seem to like most is talking about riding. They rhapsodize about riding without helmets, and about Bike Week in June down at the Weirs in Laconia, New Hampshire, and part of me can’t stand to listen to their ridiculous talk, and another part of me is glad my father has someone to talk to. He’s kind of a loner—well, we both are—and sometimes it feels like we are two dice rattling around in this cruddy old house, and that when my mom died, she gave us a great big shake and we’ve been rolling ever since.

For what it’s worth, my mom, Sylvia, was what people call flighty, when they’re being kind, and undependable, when they’re being mean. She was a part-time art teacher at some of the elementary schools here in New Hampshire. She drove around in an old Subaru station wagon and went to different schools and worked with the kids. She specialized in found art. Found art is when you take old junk and make something more interesting out of it. The junk suggests its shape to you, she’d say. What that really meant was the porch of our colonial house was so jammed with crud, you could barely squeeze through it, but Mom didn’t notice. She was always going to yard sales or buying some cheap junk at Second Comings, the church secondhand store. It was a disease with her, really, like a hoarder who uses other people’s discards to seal herself off from the world. Walling herself off, living way down inside herself, constituted my mom’s real art.

I was raised a Catholic, but I’ve only gone to Mass a couple times. I usually went when my mom was on some turn-over-a-new-leaf kick, but I remember Father Poloski saying one thing that stuck with me. He said you could commit a sin by doing wrong, a sin of commission, but you could also commit a sin by ignoring something wrong in front of you, a sin of omission.

Wally existed in front of us all, and I did nothing for about fourteen days. Maybe a little longer.

I suppose that’s some kind of sin.

* "Narrator Clair is absolutely believable as the girl who’s stable yet also negotiating her own loss."

—The Bulletin of the Center for Children's Books, starred review

“An unexpected, generous and poignant portrait of a girl, a boy, and the dog who brings them together.”

—Huntley Fitzpatrick, author of What I Thought Was True

"Masterful! Heartwarming! I read it in one sitting. I could not put it down. One of the best YA novels I have read in years."

“Destined to become a classic. . . Whippoorwill is about the love and care and neglect and magical inter-species connections between an animal and members of a family, and it will both devastate and transform you. I love this book.”

"Whippoorwill is an invitation to walk a mile in Wally's paws, and discover that sometimes there are strays of the human variety—and they, too, need love, compassion, and, most importantly, trust."

—Jennifer Brown, author of Torn Away

* "The narrative adeptly portrays longing and belonging, and the heartbreak and hope of not only the human condition but the canine one as well. Monninger revitalizes the boy-and-dog trope in this sweet novel."

"A sweet, melancholy read for those whom a dog holds a special place in their hearts, and who might just wonder: in dog-human relationships, who rescues whom?"

“Recalls William H. Armstrong’s Sounder, Wilson Rawls’s Where the Red Fern Grows, and Phyllis Reynolds Naylor’s Shiloh. . . [it] will resonate most with animal lovers (I count myself among them), and readers who consider tears signs of a great ending.” 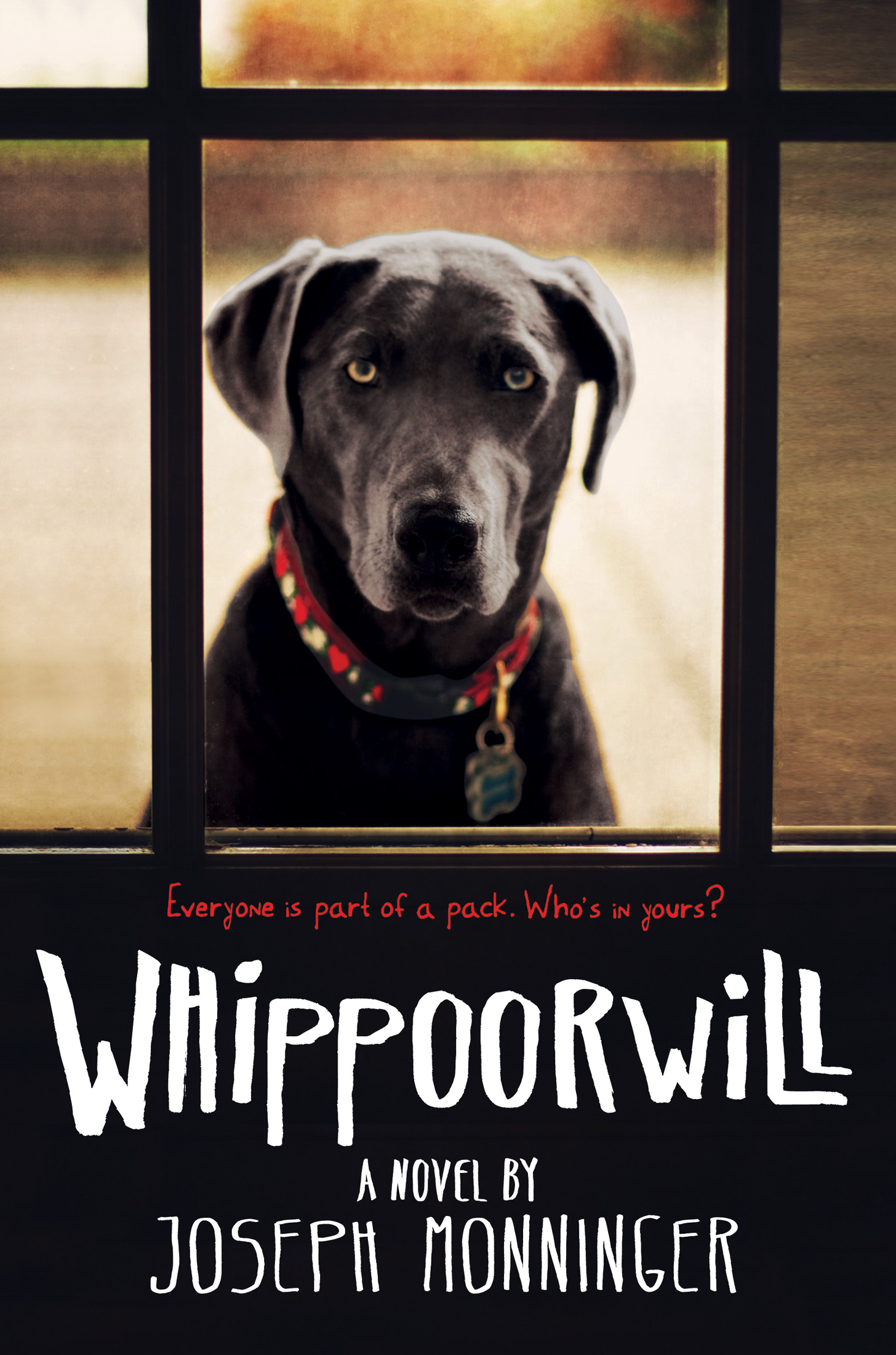