Where Is Joe Merchant?: A Novel Tale

Five years ago, the rock star Joe Merchant committed suicide, yet he keeps popping back into the tabloid headlines like a piece of toast. Spotted everywhere from Cincinnati to Atlanta, the dead guitarist is now more famous than ever. Could he actually be alive?
Where is Joe Merchant? For Frank Bama, the quest to find him is just one more excuse to flee Key West and change latitudes. For Trevor Kane, the hemorrhoid-ointment heiress, it is an attempt to unravel the mystery of her brother's death. For Desdemona, Joe Merchant is another missing link in her communication with space aliens as she tries to build a rocket ship, and for yellow journalist Rudy Breno, Joe Merchant makes better headlines than Elvis.
Once again, Jimmy Buffett cooks up a fictional gumbo of dreamers, wackos, modern-day pirates, and sharks--as Frank and Trevor embark on a wild chase through the Caribbean Islands to Boomtown, an imaginary tropical oasis where anything can happen and everything does. Welcome to paradise.

Where is Joe Merchant? That's what his sister, Trevor Kane, the hemorrhoid-ointment heiress, wants to know. For Desdemona, Merchant is the missing link in her ongoing communications with space aliens. Tabloid journalist Rudy Breno only cares that Merchant gets bigger headlines than Elvis. And for renegade seaplane pilot Frank Bama, the mystery of the presumed-dead-but-often-sighted rock star is turning his life upside down.
In his debut novel, Jimmy Buffett cooks up an irresistible gumbo of dreamers, wackos, pirates, and sharks, as he leads Trevor and Frank on a wild chase through the Caribbean Islands to a place where anything can happen . . . and everything does.

About the author
Jimmy Buffett

Singer/songwriter/author Jimmy Buffett has become a legend of popular culture as the composer of such classic songs as "Margaritaville" and "Cheeseburger in Paradise." He has recorded more than thirty albums, most of which have gone gold, platinum, or multiplatinum, and his sold-out concert tours are an annual rite of summer for his fans. In addition to his musical credits, Buffett is also one of only six authors who have had number-one New York Times bestsellers in both fiction (Where Is Joe Merchant?) and nonfiction (A Pirate Looks at Fifty).

I'll Be at the Airport

I was watching the Cubs game and eating a fried shrimp platter at Bobalou's when Rudy Breno burst through the door like Geraldo Rivera on a drug raid. I had met Rudy at the Chart Room Bar in Key West, and I wasn't a fan. I had no fondness for him or the accusing, fabricated stories he published in his father's paper, a yellow-journalism rag called the National Lighthouse.

Rudy Breno was one of those middle-aged men who looked into the mirror and refused to buy the hard truth of the aging process. His squatty frame carried about forty extra pounds above his "fighting weight" in the form of love handles and a pot belly that spilled over the waist of his Sansabelt slacks. He insisted his pants still fit perfectly although the fly would never zip up all the way. Rudy had no ass at all, and from the side it looked as if somebody had flattened his butt with a two by four. Yet when Rudy looked at his physique in the morning, he saw himself as a Tom Selleck look-alike.

He strutted up to me as if he were Marshal Dillon.

"Frank Bama, I need to talk to you in the bathroom, now."

In the fabulous Florida Keys, words like that either announce your sexual preference or your line of work. I waited until Harry Carey finished his unrivaled rendition of "Take Me Out to the Ball Game" before my curiosity got the best of me, and I followed Rudy into the bathroom.

"I need to charter your plane. I've got to get to Havana. Do you know how to get to Cuba?"

"Yeah, take a left at the southernmost point of Florida and keep going till you run into something. That'll be Cuba."

"This is serious business, Bama. I've gotten permission from the Cuban government to make this trip, but I have to let them know the name of the pilot and the serial number of the plane." He leaned over to me and whispered, "Captain Bama, Joe Merchant was spotted yesterday at a baseball game in Havana. There's a man who has pictures. This is the story of the century."

"Right up there with landing on the moon, I'd say."

Rudy wasn't listening. "Joe Merchant not dead at all but alive and well, an expatriate rock star living in a communist country-wow. Well, I need to know-can you take me?"

"Why did we have to come into the bathroom to have this conversation?" I asked.

"It's part of the story. I like the intrigue of taking a seaplane to Cuba and meeting the blond, handsome, maverick pilot-that's you-in a place like this."

"My shrimp's getting cold, Rudy."

I took a pen out of my pocket and wrote down my phone number at the hangar. "The serial number is N40SB. I'll call flight service and file a flight plan to Havana. You call me at that number by five and let me know that we do, in fact, have clearance to enter Cuban airspace."

Rudy dropped two quarters in the rubber machine and slipped the aluminum-foil packets into his pocket. "Can't be too careful these days, you know. Say, you went out with Joe Merchant's sister for a while when she lived down here, didn't you?" The words oozed out of Rudy's fat mouth like sludge, and all of a sudden I felt dirty and began to wash my hands.

I yanked on the towel machine. "That's old business, and none of yours. There's weather moving in tomorrow, so I want to leave early and be back as soon as we can. Understood?"

"And bring cash. Five-hundred-dollar deposit, and I'll expect the rest when we get home."

Rudy Breno rushed out of the restaurant, leaving a trail of bad will behind him. I finished my shrimp and thought about what had just happened. Rudy was about as pleasant as a root canal, but the job couldn't have come at a better time. I'd been wanting to hightail it out of Key West and escape to a new, debt-free life in the Alaskan wilderness, but I'd been too broke to do it. I figured the trip to Cuba would bring me at least a thousand bucks, and I knew Rudy was good for the money. His old man was loaded and ran the paper as a hobby. His real source of income was hazardous-waste disposal.

I was smiling when I left Bobalou's, and I checked the sky as I headed for my Jeep. A low-pressure trough was moving into the area, and the air was getting thicker as the moisture built up. Squalls out on the Gulf Stream lit the distant horizon, and there wasn't a breath of air stirring.

"We have work!" I shouted to Hoagy, my golden retriever, who sat in the front seat. He sniffed the air and eyed the small brown bag in my hand.

"Oh, it's the noble dog look. What a champion," I said. I opened the bag and tossed a hushpuppy into the air. Hoagy caught it, chewed it once, licked his mouth with his long pink tongue, and waited for the second launch. "It's a high pop-up," I yelled and tossed the second hushpuppy high into the sky. Hoagy bolted from the seat into the parking lot and ran under the hushpuppy, positioning himself for the catch like a confident outfielder. He opened his mouth a split second before the ball of fried cornmeal fell directly down his throat.

"Load up," I called, and Hoagy sprang across the driver's seat to the passenger's side. I tossed him the last hushpuppy and patted his head, and Hoagy barked and gave me a big lick.

I pulled out onto U.S. 1 and drove north, listening to "Time Loves a Hero" by Little Feat. The air was filled with bugs of every description, and they were cannon fodder for the passing cars. I hummed along with Lowell George but made up my own lyrics.

The next morning, Rudy Breno paraded into the Lone Palm Airport dressed in camouflage fatigues, a green beret, and a bandolier stuffed alternately with Slim Jims and Bic pens. On his wrist he sported a diving watch that looked as if it could tell time in every world time zone, do his banking, and split the atom. A Polaroid camera hung around his stumpy neck, and a wad of Florida lottery tickets protruded from the pocket of his flak jacket.

"What the hell are the lottery tickets for?" I asked.

"These people have been living in the Stone Age. A little capitalism will go a long way to get the information I need."

Hoagy bounded up the runway with a Frisbee dangling from the side of his mouth, and when he saw Rudy, he dropped it and started barking furiously. I called him to my side and bent down to calm him. That's when I saw the .25-caliber Beretta pistol stuck in Rudy's pants.

"Let's go, Captain. We're hounds on the scent. Joe Merchant is alive and breathing somewhere over there." He pointed at the horizon.

"That's north. Cuba is over there," I said, pointing the opposite direction.

"You're the pilot." Rudy squinted down at his watch and pressed several buttons. "It's exactly 11:30 Zulu. What's our proposed time off and time en route, Captain?"

"I'm not goin' anywhere with you, Clambo. First the gun, and then the money."

"Shit," Rudy muttered as he handed over the gun.

I pulled out the clip and checked the chamber. I felt like Sheriff Andy Taylor taking away Barney Fife's one bullet.

I'd been to Cuba a number of times with Billy Cruiser during the Mariel boat lift, and just last year I'd flown there and brought Darryl Lemma back to Key West. Darryl was a sleazy charter-boat captain who had been hijacked to Havana, and Rudy Breno had thrown in the Devil's Triangle and made headlines out of it.

Flying into Cuba is always a mystery. Sometimes it's easy, and other times it's a nightmare of paperwork and bullshi...

PRAISE FOR WHERE IS JOE MERCHANT?

"A roisterous romp, a novel Elmore Leonard might have written if he made Key West and the Caribbean his home . . . Part soap opera, part Saturday morning cliffhanger and all fun."

"A high-jinks lark and a breezy read . . . An oddball combination of a wild adventure story and a wacky whodunit."-The Boston Globe 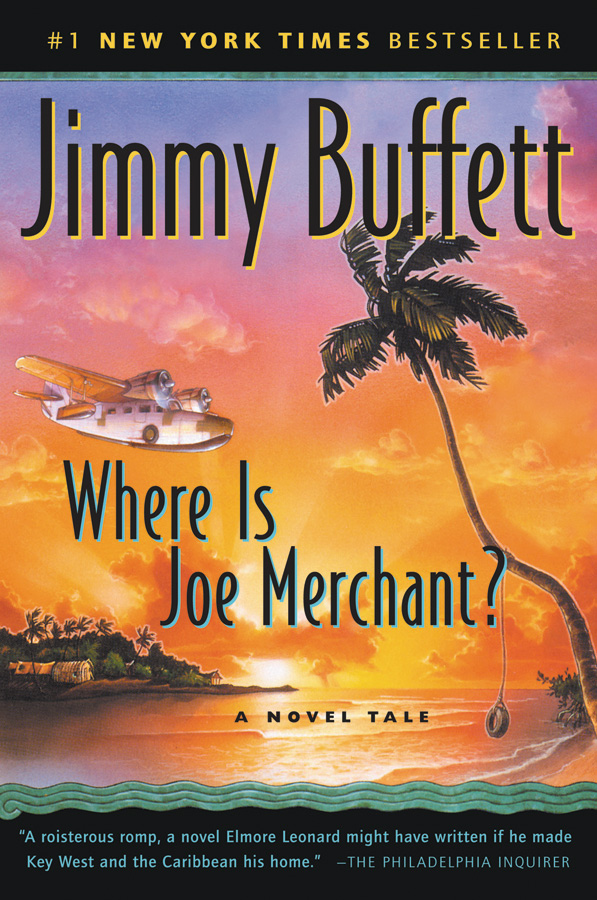