What There Is to Say We Have Said: The Correspondence of Eudora Welty and William Maxwell

Suzanne Marrs—Welty's biographer and friend—has culled all the extant letters between Eudora Welty and William Maxwell, granting us a unique glimpse into the friendship of two of our country's most beloved literary icons. Bear witness to what began as a writer-editor relationship and bloomed into a life-long intimate conversation between two artists.

"An epistolary feast for literary fans [and] a confidence booster for aspiring writers everywhere. A–" —Entertainment Weekly

"If friendship is an art, this volume is its masterpiece." —Lee Smith

"A remarkable testimony to friendship, literature, and an abiding love of life." —Richmond Times-Dispatch

What There Is to Say We Have Said bears witness to Welty and Maxwell’s more than fifty years of friendship and their lives as writers and readers. It serves as a chronicle of their literary world, their talk of Katherine Anne Porter, Salinger, Dinesen, Updike, Percy, Cheever, and more. Through more than three hundred letters, Marrs brings us the story of a true, deep friendship and an homage to the forgotten art of letter writing.

"A vivid picture of twentieth-century intellectual life and a record of a remarkable friendship... Glorious." —Houston Chronicle

"These letters evoke a lost world when events moved a bit more slowly, and friends could take the time to be both eloquently witty and generous with each other, and letters were unobtrusively artful about daily life. Welty and Maxwell are like two birds of the same species, calling to each other across the distances." —Charles Baxter

About the author
Suzanne Marrs

SUZANNE MARRS is the author of Eudora Welty: A Biography and One Writer's Imagination: The Fiction of Eudora Welty; the editor of What There Is to Say We Have Said: The Correspondence of Eudora Welty and William Maxwell; and a recipient of the Phoenix Award for Distinguished Welty Scholarship. She is a professor of English at Millsaps College.

Letters, reading them and writing them, claimed the rapt attention of

Eudora Welty and William Maxwell throughout their adult lives, and books

they found particularly engaging. In 1983, Maxwell collected and edited a

Welty included many letters when she coedited The Norton Book of Friendship.

In the introduction to that book, she noted:

All letters, old and new, are the still-existing parts of a life. To read them

now is to be present when some discovery of truth—or perhaps untruth,

some flash of light—is just occurring. It is clamorous with the moment’s

happiness or pain. To come upon a personal truth of a human being

however little known, and now gone forever, is in some way to admit

him to our friendship. What we’ve been told need not be momentous,

bright eye, still mischievous and mischief-making, arriving from fifty or

a hundred years ago.1

For both Welty and Maxwell, letters provided a way of expanding the

range of their friendships. Letters provided a more comprehensive sense of

the person who, whether or not that person was someone they had actually

known, stood behind the stories, poems, and essays they valued or found interesting.

Although Welty and Maxwell awarded letters a modest place in

the hierarchy of literary genres, it was a place of importance to them. So

it is not surprising that in 1976, when a second volume of Virginia Woolf’s

letters came into print, both Welty and Maxwell, two longtime admirers of

struck dissonant tones but had a common focus. Welty opened her

without letters.” That statement, Welty went on to suggest, described

the writer herself. “A need for intimacy,” Welty asserted, “lies at the very

core of Virginia Woolf’s life. Besides the physical, there are other orders of

intimacy, other ways to keep life from splitting asunder. Lightly as it may

touch on the moment, almost any letter she writes is to some degree an expression

of this passion, of which the eventual work of art was The Waves.”2

To Welty, even letters filled with lacerating wit were a way of reaching for

Maxwell did not fully agree with this assessment. Instead of discussing a

desire for intimacy in Woolf’s letters, he described a lack of self-assurance:

“Even though Virginia Woolf was, I think, a writer of the first rank, she

could not rest secure in the knowledge of her talent; the prevailing tone of

the letters written in her maturity is disparagement.” Particularly distasteful

to Maxwell was Woolf’s habit of ridiculing others, and he felt that “strangers

friends.” Though he sought to avoid moral judgments based on material

not intended for publication and though he recognized that no friendship

is without its prickly moments, Maxwell felt that Woolf could take “pleasure

in being cruel.” Still, there were letters of a different sort, and Maxwell

particularly lauded one that Welty also admired. In that 1922 letter, Woolf

acknowledged her own vulnerability to doubt and sent encouragement to a

The Virginia Woolfs who emerged from the Welty and Maxwell reviews

were strikingly different people, but undergirding both reviews was a belief

that letters should be a way of embracing, supporting, and uniting with

friends and that letters communicate most profoundly when they do not

mask vulnerabilities. This shared belief is everywhere evident in the letters

Eudora Welty and William Maxwell themselves wrote. “Orders of intimacy”

characters in their stories and novels. There the powerful need for friendship

is typically defined by its lack. Not so in their correspondence.

Welty shared intimate and voluminous exchanges of letters with many

Aswell; childhood friend Frank Lyell; and the two men she loved over the

course of her life, John Robinson and Ross Macdonald. Welty and these

friends saved the letters they exchanged, and as her friends faced death,

they stipulated that the letters Welty had written be returned to her. Although

Welty at one point considered destroying these two-sided correspondences

she came to possess, she ultimately willed them to the Mississippi

Department of Archives and History.

Maxwell’s correspondence with friends was as extensive and generous

as Welty’s. He corresponded with fellow writers such as Frank O’Connor,

He allowed his correspondence with Warner and O’Connor to be published.

In the late 1990s, he gave his alma mater, the University of Illinois,

a huge collection of his papers, including many letters from Eudora Welty.

His estate has made his remaining letters from Welty available for this book,

For more than fifty years, Welty and Maxwell wrote to each other, sharing

their worries about work and family, their likes and dislikes, their griefs

and joys, their moments of despair and hilarity. Reading their letters admits

us into the friendship of these two intellectual, imaginative, and erudite individuals.

We learn that they were great in-takers—at times fascinated, at

times appalled by the world about them, but always describing it vividly

with deft turns of phrase. Their letters often sparkle with humor, but their

humor can also take on an ironic dimension. A generosity of spirit pervades

the correspondence but is never saccharine. Although literary friendships

of discontent. Issues of jealousy, resentment, cruelty, or condescension

never threatened their relationship, which began in 1942, deepened

over time, and found eloquent expression in their letters. In those letters,

neither engaged in posturing or affectation. Instead, they both achieved the

“triumphant vulnerability” that can result from daring to trust, empathize,

Near the end of her introduction to The Norton Book of Friendship,

Welty asked, “Did friendship between human beings come about in the

first place along with—or through—the inspiration of language?” And then

she attempted to answer her own question:

It can be safe to say that when we learned to speak to, and listen to,

rather than to strike or be struck by, our fellow human beings, we found

something worth keeping alive, worth the possessing, for the rest of time.

"A map into the very heart of friendship and creativity. Every page is a privilege to read."

"An epistolary feast for literary fans [and] a confidence booster for aspiring writers everywhere. A–"

"If friendship is an art, this volume is its masterpiece."

"A remarkable testimony to friendship, literature, and an abiding love of life...An invitation to draw up a chair and enjoy two good friends as interested in their rose gardens as their writing."

"A vivid picture of twentieth-century intellectual life and a record of a remarkable friendship... Glorious."

"Full of great tidbits about The New Yorker back in the day ... Charming."

"A raft of tender, day-to-day details ... Like eavesdroppers on a party line, we’re privy to everything ... In today’s world of texting, Twitter and Facebook, where our empathy for others is often reduced to a ‘like’ button, coming across such a sustained account of a friendship is like shining a flashlight on the cave walls at Lascaux ... How fortunate we are that their kinship endured long enough for them to say everything there was to say."

"Beautifully expressive ... [Marrs] has performed an important service here ... A valuable record of the authors’ writing process ... Maxwell and Welty, of course, loved to write, and writers and readers will be awed to learn of both the macro and the micro."

"[Maxwell and Welty’s] love, a source of sustenance and strength between two great writers, is also a bright tonic for the readers of this volume, which affirms Welty’s belief that to read someone’s letters ‘is in some way to admit him to our friendship.’"

"These loving and revealing letters guide us back to the fiction of both authors."

"A valuable portrait of a unique and lasting friendship, and a celebration of a certain kind of joy that is rapidly disappearing—the joy of writing and sending, receiving and reading personal letters."

"This collection of letters takes us into the world of Eudora and William. We get to see how their friendship deepened over time and became something special."

"To read What There Is to Say We Have Said is to feel the noise and speed of the present era fall away, to sense the natural world reasserting itself. Time slows, and you arrive in a more pastoral moment."

"For 50 years, Welty and Maxwell communicated in full detail, with deep and genuine affection, serving up revelations about themselves that give these literary figures a greatly wonderful human dimension . . . This is one of the richest and most riveting collections of famous-people letters to emerge in some time." —Booklist

"Inspiring . . . A vivid snapshot of 20th-century intellectual life and an informative glimpse of the author-editor relationship, as well a tender portrait of devoted friendship."

"The correspondence of this volume [is] gracefully edited and annotated by Welty’s biographer Marrs . . . Both correspondents were blessed with personality-plus, mirrored in these letters."

"How rewarding to become the third person present in the discoveries of life and literature between Eudora Welty and William Maxwell. I have always believed the only ‘knowing’ one can have of a fiction writers is through the fiction itself; but here, in the personal medium of to-and-fro wit and vitality, is to be had further experience of the writer Eudora Welty, whose stories, in particular, have opened my vision of human relations."

"Something truly special happened each time Eudora Welty and William Maxwell wrote a letter to the other. Suzanne Marrs has collected more than 300 of those letters and set them into a time and context. Anyone who relishes and celebrates the magic use of words, storytelling and friendship will treasure the end result forever."

"This book lets us in on the happy fact that two splendid writers, who did not sacrifice humanity to career, were warmly admitted to each other’s lives. Its generosity of tone is such that the readers feels not a trespasser but a guest. Suzanne Marrs’s editing is worthy of a delightful text."

"A complex improvisation carried on for years by two artists for whom nothing in the realm of literature or feeling was remote."

"A literary revelation. Suzanne Marrs’s editing of this rich collection is superlative." 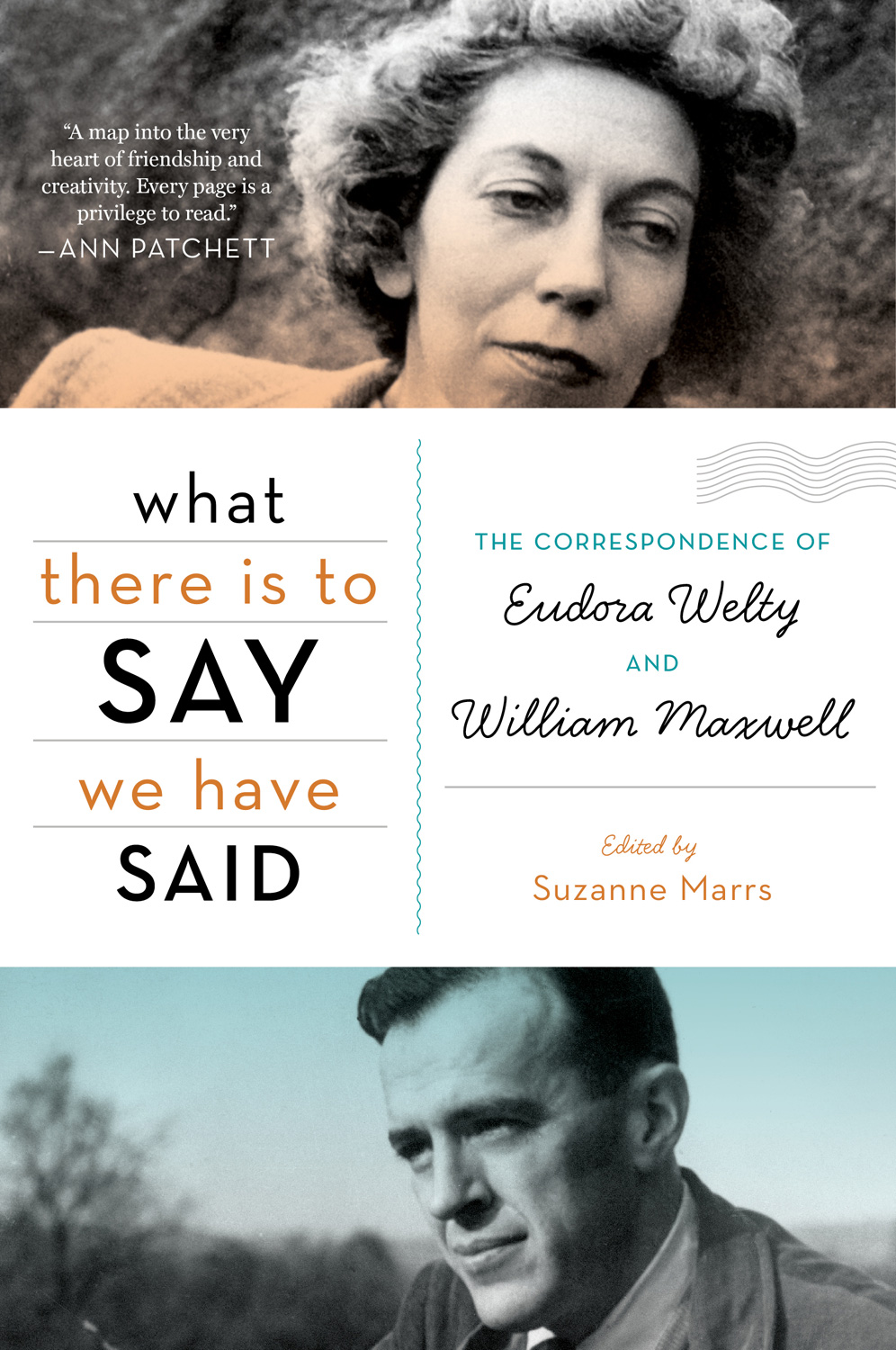