We the Animals is a gorgeous, powerful novel that tears deep into the heart of family and launched Justin Torres straight into the spotlight, with a storm of praise from far and wide, including this from Esquire:  "Justin Torres is about to be knighted. We the Animals . . . is the kind of book that makes a career."

In this groundbreaking debut, Justin Torres plunges us into the chaotic heart of one family, the intense bonds of three brothers, and the mythic effects of this fierce love on the people we must become.

"We the Animals is a dark jewel of a book. It’s heartbreaking. It’s beautiful. It resembles no other book I’ve read.”—Michael Cunningham

"A miracle in concentrated pages, you are going to read it again and again." —Dorothy Allison

"A fiery ode to boyhood . . . A welterweight champ of a book." —NPR, Weekend Edition

"A tremendously gifted writer whose highly personal voice should excite us in much the same way that Raymond Carver’s or Jeffrey Eugenides’s voice did when we first heard it." —Washington Post

"A novel so honest, poetic, and tough that it makes you reexamine what it means to love and to hurt." —O, The Oprah Magazine

"The communal howl of three young brothers sustains this sprint of a novel . . . A kind of incantation." —The New Yorker

About the author
Justin Torres

JUSTIN TORRES's first novel We the Animals, a national bestseller, has been translated into fifteen languages and is now a feature film.  He has published short fiction in The New Yorker, Harper's, Granta, Tin House, The Washington Post, Glimmer Train, Flaunt,and other publications, as well as non-fiction pieces in publications like The Guardian and The Advocate.  A graduate of the Iowa Writers' Workshop, he was a Wallace Stegner Fellow at Stanford University, a fellow at the Radcliffe Institute for Advanced Study at Harvard, and a Cullman Center Fellow at The New York Public Library.  The National Book Foundation named him one of 2012's 5 Under 35.  He has been the recipient of a grant from the National Endownment for the Arts, a Rolón Fellowship in Literature from United States Artists, and the VCU Cabell First Novelist Award. Recently, he served as Picador Guest Professor for Literature at the University of Leipzig. He lives in Los Angeles, where he is Assistant Professor of English at UCLA.

Reviews
"We the Animals is a dark jewel of a book. It’s heartbreaking. It’s beautiful. It resembles no other book I’ve read. We should all be grateful for Justin Torres, a brilliant, ferocious new voice."

"The best book you'll read this fall...We the Animals, a slim novel—just 144 pages—about three brothers, half white, half Puerto Rican, scrambling their way through a dysfunctional childhood, is the kind of book that makes a career....Torres’s sentences are gymnastic, leaping and twirling, but never fancy for the sake of fancy, always justified by the ferocity and heartbreak and hunger and slap-happy euphoria of these three boys. It’s a coming-of-age novel set in upstate New York that rumbles with lyric dynamite. It’s a knock to the head that will leave your mouth agape. Torres is a savage new talent."

"A novel so honest, poetic, and tough that it makes you reexamine what it means to love and to hurt. Written in the voice of the youngest of three boys, this partly autobiographical tale evokes the cacophony of a messy childhood—flying trash-bag kites, ransacking vegetable gardens, and smashing tomatoes until pulp runs down the kitchen walls. But despite the din the brothers create, the novel belongs to their mother, who alternates between gruff and matter-of-fact—'loving big boys is different from loving little boys—you’ve got to meet tough with tough.' In stark prose, Torres shows us how one family grapples with a dangerous and chaotic love for each other, as well as what it means to become a man."

"The imagistic power of Justin Torres’ debut, We the Animals (Houghton Mifflin Harcourt), exists in inverse proportion to its slim 128 pages. Just try shaking off this novel about three upstate New York brothers whose knockabout childhoods with their Puerto Rican 'Paps' and white 'Ma' are the narrative equivalent of feral kitties being swung overhead in a burlap bag."

"A kind of heart-stopping surge of emotion and language in this musical tornado of a novel."

"[We the Animals] packs an outsized wallop; it's the skinny kid who surprises you with his intense, frenzied strength and sheer nerve. You pick up the book expecting it to occupy a couple hours of your time and find that its images and tactile prose linger with you days after...what stays with me are the terrible beauty and life force in Torres' primal tale."

"A slim book can hold volumes. We the Animals, the first novel from Justin Torres, is such a book. Not an ounce of fat on its slight frame, but the story is sinewy. Stong....We the Animals crafts beauty out of despair. From lives so fragmented they threaten to break off into oblivion at any moment, Torres builds a story that is burnished, complete. That takes talent, diligence and more than a little grace."

"We the Animals is a book so meant to break your heart that it should lose its power just on the grounds of being obvious. That it pierces—with an arrow dipped in ache—signals that Justin Torres is a writer to embrace from the start. This is his first novel."

"Some books quicken your pulse. Some slow it. Some burn you inside and send you tearing off to find the author to see who made this thing that can so burn you and quicken you and slow you all at the same time. A miracle in concentrated pages, you are going to read it again and again, and know exactly what I mean."

"In language brilliant, poised and pure, We the Animals tells about family love as it is felt when it is frustrated or betrayed or made to stand in the place of too many other needed things, about how precious it becomes in these extremes, about the terrible sense of loss when it fails under duress, and the joy and dread of realizing that there really is no end to it."

"We the Animals snatches the reader by the scruff of the heart, tight as teeth, and shakes back and forth—between the human and the animal, the housed and the feral, love and violence, mercy and wrath—and leaves him in the wilderness, ravished by its beauty. It is an indelible and essential work of art."

"We the Animals marks the debut of an astonishing new voice in American Literature. In an intense coming-of-age story that brings to mind the early work of Jeffrey Eugenides and Sandra Cisneros, Torres's concentrated prose goes down hot like strong liquor. His beautifully flawed characters worked their way into my heart on the very first page and have been there ever since."

"We the Animals is a gorgeous, deeply humane book. Every page sings, and every scene startles. I think we'll all be reading Justin Torres for years to come."

"Three brothers and a dueling husband and wife are bound by poverty and love in this debut novel from Stegner Fellow Torres...The short tales that make up this novel are intriguing and beautifully written"

"An exquisitely crafted debut novel—subtle, shimmering and emotionally devastating...the narrative voice is a marvel of control—one that reflects the perceptions and limitations of a 7-year-old in language that suggests someone older is channeling his younger perspective. In short chapters that stand alone yet ultimately achieve momentum, the narrator comes to terms with his brothers, his family and his sexuality, separating the 'I' from the 'we' and suffering the consequences. Ultimately, the novel has a redemptive resonance—for the narrator, for the rest of the fictional family and for the reader as well. Upon finishing, readers might be tempted to start again, not wanting to let it go." 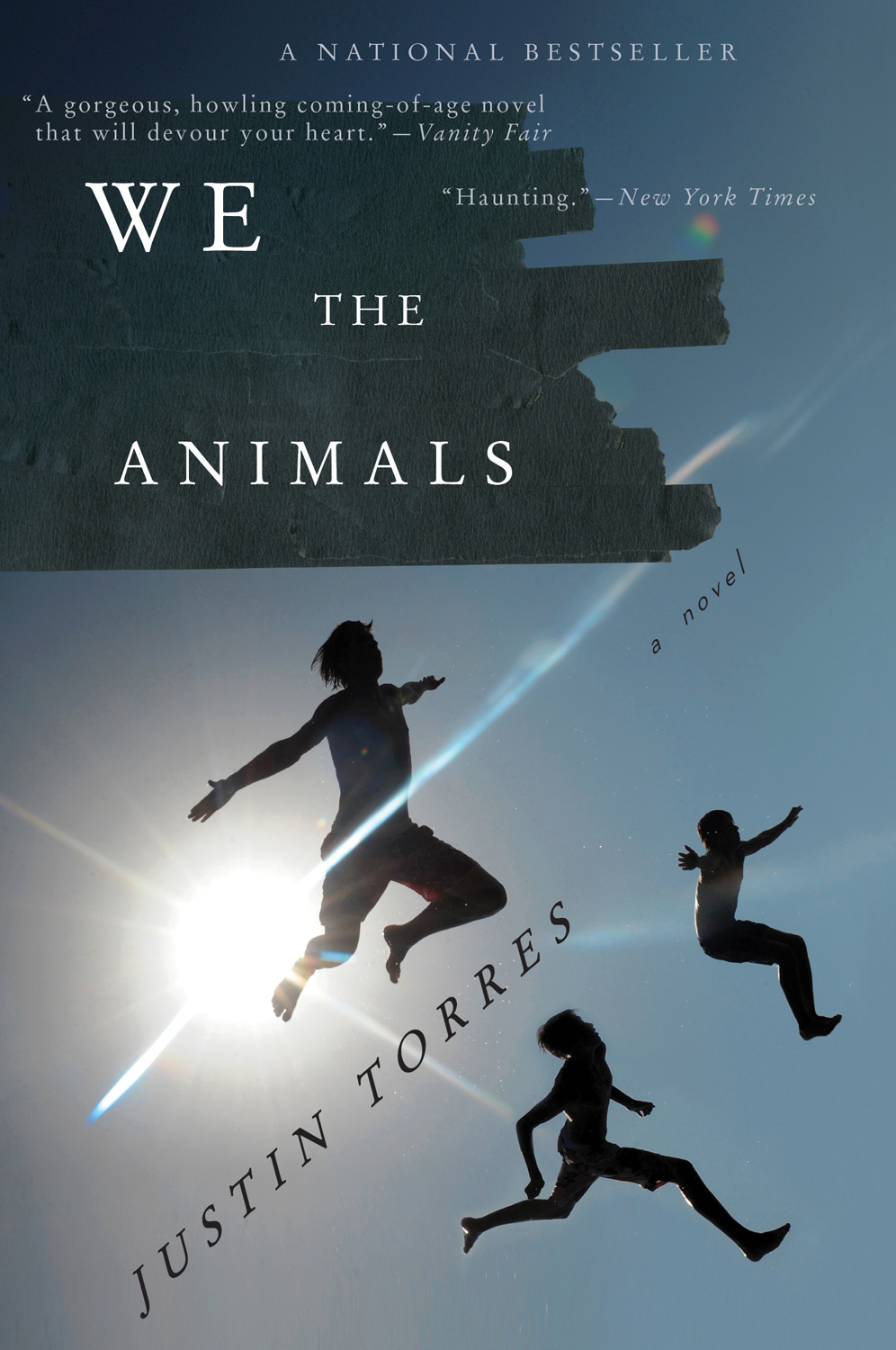