Big Brother meets outer space in this "edgy, madcap romp" about a group of teens who board a spaceship to have their lives filmed (VOYA).

Cram ten hormonal teens into a spaceship and blast off: that’s the premise for the ill-conceived reality show Waste of Space. The kids who are cast know everything about drama—and nothing about the fact that the production is fake. Hidden in a desert warehouse, their spaceship replica is equipped with state-of-the-art special effects dreamed up by the scientists partnering with the shady cable network airing the show.

And it’s a hit! Millions of viewers are transfixed. But then, suddenly, all communication is severed. Trapped and paranoid, the kids must figure out what to do when this reality show loses its grip on reality. A suspenseful and satirical look at reality TV that will keep readers laughing and guessing until the last page.

And so it comes to pass that in the midst of a rare Los Angeles thunderstorm, a dozen shadowy figures meet in the small hours of the morning at a secret and nefarious location: the Denny’s off Wilshire Boulevard. They take up two tables, eight urns of coffee, and five carafes of orange juice. The astrophysicists wittily order Moons Over My Hammy. The television executives order nothing.

[Note: Due to the difficulty in identifying multiple voices, most speakers have been labeled with their organizations rather than as individuals; this format will be employed in several instances throughout this report.]

DV8: You’re okay with us recording this, right?

NASAW: We don’t know what “this” is yet.

[thirty seconds of unintelligible chatter, rustling, sound of plates being placed on table and silverware clanging]

DV8: All right. Now that you’ve got your breakfasts—

NASAW: Aren’t you going to eat?

NASAW: Not even a bagel?

DV8: Especially not a bagel, Paleo doesn’t—forget it. Back to the matter at hand: our proposal. Chazz?

[sound of a throat clearing, then a chair scraping across the floor as Chazz Young, CEO of DV8, stands up to address the group]

Chazz: Ladies and gentlemen of science, I hate to break it to you, but astrophysics isn’t cool anymore. Sure, people embrace technology when it allows them to post photos of epic bacon-wrapped food items, but drag them into a planetarium and you’ll end up with desperate scratch marks on the walls. Funds have been cut, the man on the moon is several decades in the rearview mirror, and the youth of America continue to respond to the vast and impossibly boundless possibilities of outer space with an emphatic yawn.

Chazz: Science fiction is cool. Science is not.

Chazz: Example: two different panels at Comic Con, one with the cast of a space-movie franchise and one with genuine astronauts. Which do you think will be better attended?

Chazz: Exactly. Likewise, we admit, people have grown bored with the repetitive nature of reality television. They can only watch so many bar fighters, spurned lovers, table flippers, bug eaters, bad singers, and cat hoarders before it all seems like stuff they’ve already seen before. The world is clamoring for something new! Otherwise they’ll have to turn off their devices and go read a book, and we simply can’t have that.

Chazz: Books are the worst.

Chazz: So. You need to drum up interest in the space program, and we need more eyes on more screens. Luckily, we’ve come up with a solution that we feel will be mutually beneficial to both of us.

NASAW: And that is?

Chazz: We want to take a bunch of teenagers and shoot them into space.

Chazz: And put it on television.

NASAW: Aside from reasons that should be apparent to anyone with a functioning brainstem, it’s a logistical nightmare. They’d need to undergo months of training and health assessments. You’d need a ship big enough to accommodate a cast, crew, equipment—

Chazz: Oh, we’ll be faking it. The whole thing will be shot on a soundstage. You really think The Real Housewives of Atlantis was filmed at the bottom of the ocean? Please. Those women were so full of silicone they would have floated straight to the surface.

NASAW: But we thought this would be a purely educational endeavor. Didn’t you say you were from PBS?

Chazz: It’s a cable television network with several blocks of programming across multiple platforms, including streaming services, our own website, and every social media outlet there is. We’d like to cram all of them full of this.

Chazz: Which is why we need you! Our first choice was obviously NASA, but they not-so-politely declined. So the low-rent version of NASA it is!

NASAW: I beg your pardon. We are the National Association for the Study of Astronomy and Weightlessness. We are not some piddling little administration—

Chazz: Which is exactly why we’d like you to be consultants. We’ll take care of the casting, the production, everything on that end. You, meanwhile, design a convincing spaceplane—

Chazz: —you tell us what all the rumbles and beeps and boops are supposed to sound like, and we’ll bring in the best special-effects team money can buy.

NASAW: But won’t this seem like one big joke? With all due respect to your special effects, not even the major Hollywood movies can get it a hundred percent right. It’s going to look silly.

Chazz: People believe what they want to believe. Remember America’s Next Top Murderer? Viewers thought that victims were actually being picked off by a serial killer. The network had t...

"A sure pick for fans of sci-fi spoofs, black humor, and unusual formats." —Booklist

Damico does for media frenzy and outer space what Libba Bray did for glamour pageants in Beauty Queens, taking this adventure all the way from comedy to sharp satire."  —Bulletin

Damico nails the anything-for-hype mindset of reality TV, keeping the action whizzing along at a zany pace and the laugh lines humming." —Horn Book
We’re sorry 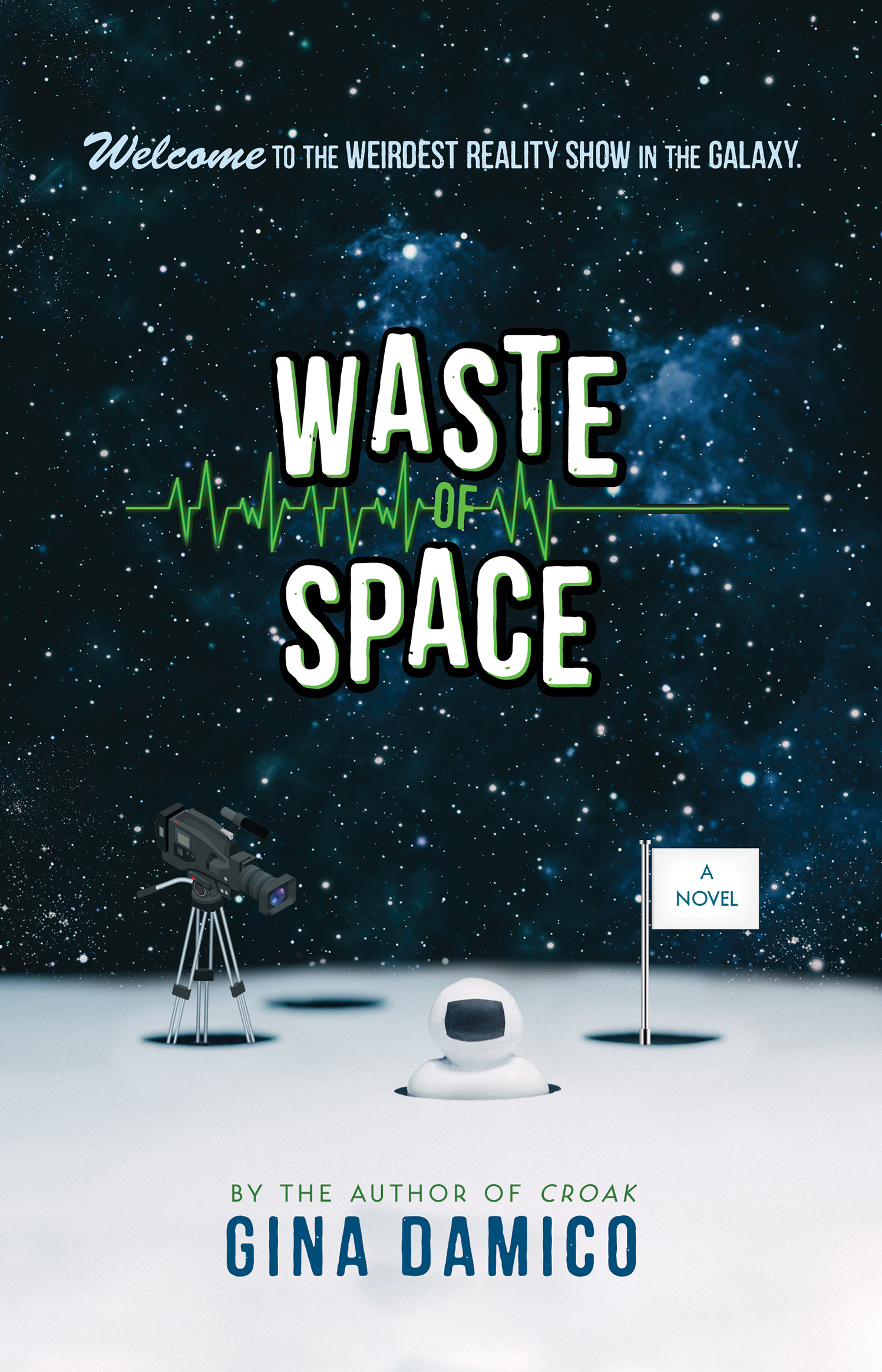