In this smart, unconventional, and action-packed YA novel that's perfect for fans of The Lunar Chronicles and The Red Queen series, an indomitable inventor and her loyal (and royal) friends cross the ocean to the lush world of Faerie, where they join a rising rebellion. Mechanical armies and dark magic await them as they uncover devastating secrets about the past and fight for a real, lasting happily-ever-after for two troubled countries—and for themselves.

The young inventor Nicolette Lampton is living her own fairy-tale happy ending. She's free of her horrible stepfamily, running a successful business, and is uninterested in marrying the handsome prince, Fin. Instead, she, Fin, and their friend Caro venture to the lush land of Faerie, where they seek to put an end to the bloody war their kingdom is waging. Mechanical armies and dark magic await them as they uncover devastating secrets about the past and fight for a real, lasting happily-ever-after for two troubled countries—and for themselves.

Smart and unconventional, this novel will appeal to readers of romance and adventure alike.

Betsy Cornwell is the New York Times best-selling author of The Circus Rose, The Forest Queen, Mechanica, Venturess, and Tides. She graduated from Smith College and was a columnist and editor at Teen Ink before receiving an MFA in creative writing from Notre Dame, where she also taught fiction. She now lives in Ireland with her son. www.betsycornwell.com Twitter: @Betsy_Cornwell Instagram: @BetsyCornwell

The furnace rumbling in my horse’s belly warmed my feet, and puffs of smoke from his nostrils drifted over me as we cantered toward the palace. Snowflakes melted and hissed on his flanks.

My patron, Lord Alming, had teased me the first time he saw the saddle I’d designed for Jules. He couldn’t understand why on earth I would want to ride in the open air when I could stay warm and dry inside the glass carriage I’d already built.

But I missed Jules when I was inside the carriage, and there was something weirdly impersonal about pulling levers to direct him, as if the levers were reins and Jules no more than a normal horse. After all, I needed only to tell him where I wanted to go, and he would take us there.

I didn’t need reins when I was riding Jules either. I had fitted retractable handles into a slot between his steel shoulder blades just in case, for my own comfort until I got used to riding again.

But I knew he would never try to throw me. Whose best friend would do that?

Riding had been Jules’s suggestion, not long after last year’s ball; it was the day I left the Steps to start my own workshop, in fact.

I had walked out of the house that used to belong to my parents with my head held high, the little mechanical insects Mother and I had made buzzing around me in a protective swarm. Mother’s books and journals, which she’d left in her workshop after she died, were boxed and stacked inside my carriage. Even with my sewing machine and dress form wedged on top of them, the small compartment was barely half full; it had been years since the Steps had let me keep anything of my own—?at least anything they knew about. I carried the ball gown Jules and the insects had made for me over my arm.

Lord Alming had been waiting for me in his own elegant barouche; I was to ride with him to my new workshop and apartments in Esting City, and Jules, pulling my carriage, would follow.

Stepmother had been there at the door when we first arrived at the house. I’d steeled myself for her icy cruelty as Lord Alming helped me out of my glass carriage, but she’d held her arms out to me and smiled, wide and beatific.

“Nicolette!” she’d cooed, grasping the hand Lord Alming wasn’t holding. She’d pressed my palm to her own cheek. Her large gray eyes fluttered closed for a moment, and her face took on the glowing expression of a painted saint. “I am so happy for you,” she’d said, with never a glance toward Lord Alming, even though this act of hers was for his benefit.

I couldn’t move, couldn’t look away from her; I’d felt a bone-deep revulsion that rooted me where I stood. My throat felt too thick and full to speak. I sensed Lord Alming watching me.

I’d torn my gaze away and glanced back at Jules, where he stood in the drive with steam rising around him in the cold morning air. His immense metal strength reassured me, and I could do what I’d intended: ignore Stepmother completely. I squeezed Lord Alming’s hand and led him forward, sweeping past her and into my parents’ house. The huge manservant who had accompanied us followed silently.

Stepmother had stayed with us, hovering like a malevolent bird as I made my way up the main staircase and down the winding corridor that led to the servants’ quarters. My bedroom there was spare and small, and it had already been ransacked, the threadbare quilt tossed in a corner, the thin mattress overturned.

But I’d always known Stepmother went through my things, and the journal I’d come for was still safely hidden in the spring-loaded slot I’d installed under the bed. I relished the small hiss she made as I took the book out.

“I wish you could have trusted me, Nicolette,” she’d said in a sweet but weakened voice. I watched not her but Lord Alming, to see if her virtuous charade was having any effect on him.

He’d given me a look of such disbelief through his monocle that I couldn’t help laughing. And when Stepmother would have followed me into the cellar, down to my mother’s secret workshop, he’d waved his hand, and his manservant had stepped forward to block Stepmother’s path.

“I won’t be gainsaid in my own house!” she’d said, more weakly still; but she didn’t struggle. She couldn’t unleash any real venom in front of Lord Alming.

When everything had finally been packed into my carriage, when I was walking at last out of that house and toward the happily-ever-after I’d built, Stepmother caught me by the wrist. She brought her other hand up to my cheek and turned my face firmly toward her, so that I had to look.

“My darling girl,” she’d said, as if intoning a prayer, “I wish you a joyful life, today and evermore.” Her words were just loud enough for Lord Alming to hear.

I’d pulled away, and my legs started to shake as I walked toward the carriages. It wasn’t her obvious attempt to play mother in front of Lord Alming that had disturbed me; it was that I’d suddenly known that she meant what she said. That even after everything she’d done to me, and everything she’d stood back and let my stepsisters, Piety and Chastity, do, she somehow believed that she wished me well now. I’d known that, when she said her real prayers that evening, she would tell the Lord that she’d tried her best to do right by me—?and that at least part of her would believe it.

I’d started to feel dizzy. I’d nearly stumbled as I kept walking away.

But Jules had stepped forward, pulling the weight of my laden carriage behind him. His bright glass eyes looked into mine and he pricked his ears and tilted his head to the side, beckoning me to come toward him. As soon as I got close enough I put my hand on his neck and leaned against him; I’d felt so sick by then that I didn’t think I could have made it even one more step on my own.

“Ride,” Jules had huffed, blowing steam against my cheek.

I’d pulled back a little to look at him. “Are you sure?”

He’d flicked one ear in annoyance. Jules meant everything he said; using his voice box caused him pain, and he never spoke unless he had to. No one else even knew he could speak.

I was too shaken to do anything but agree. I’d called to Lord Alming that we’d follow behind him, and I hoisted myself up onto Jules. My arms wrapped around his neck, I felt strength flowing into me with every step that he took. I turned for one last look at Lampton Manor and glimpsed my stepsisters’ beautiful faces framed in a first-floor window. As soon as they saw me looking, they ducked out of sight. The edges of my skirts were smoking and singed by the time we got to Esting City, but I haven’...

?  " As clever as the heroine's invented boot polishers and sewing machines, as appealing as the dresses designed by her coal-powered automaton horse." — Kirkus, starred review

"Fans of the first book will enjoy the more deeply developed characters in this book, and new readers can begin here easily as there is sufficient backstory provided. Steampunk fans will find much to love here, particularly the regal metal flying horse named Jules that gives the book it’s most heartbreakingly reflective moment." —VOYA

"This thought-provoking blend of genres deserves a spot in most middle and high school collections." — SLJ 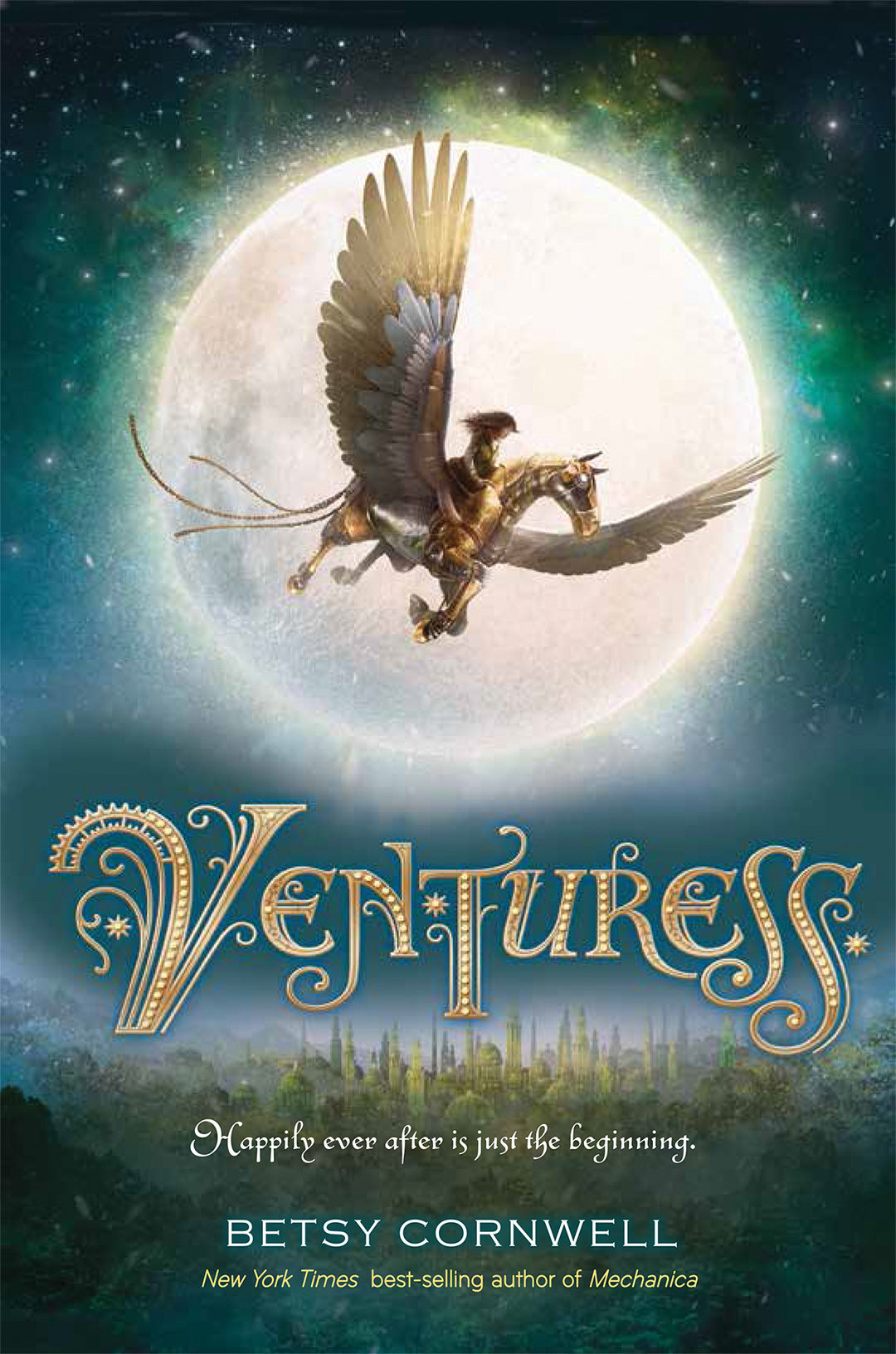