Under the Jolly Roger: Being an Account of the Further Nautical Adventures of Jacky Faber

After leaving the Lawson Peabody School for Young Girls in Boston—under dire circumstances, of course—Jacky Faber boards a whaling ship bound for London, where she hopes to find her beloved Jaimy. But things don’t go as planned, and soon Jacky is off on a wild misadventure at sea.

L. A. MEYER is the acclaimed writer of the Bloody Jack Adventure series, which follows the exploits of an impetuous heroine who has fought her way up from the squalid streets of London to become an adventurer of the highest order. He and his wife operate an art gallery near their home in a small fishing village on the coast of Maine. Visit his website at www.jackyfaber.com

Ishmael!" I call out as I skip down the gangplank of the Pequod, my seabag on my shoulder. "Good sailing to you!"

"And to thee, Jacky," he says. The boy stands by the rail watching me leave the whaler for good and ever. "Thee are sure thee will not marry me?"

I swear, these Quaker lads are so cute with their thees and thys.

"Go find yourself a nice girl, Ishmael," I say by way of answer to his proposal. "Not one that stinks of whale oil!"

"I thinks thee smells just fine, Jacky Faber." I know he is genuinely sad to see me go, just as I am sad to see the last of him. I blow him a kiss and give him a final wave and go down the gangplank and step onto the wharf and hence onto the land that is England.

I was brought on board the whaler three months ago after I had run away from the Lawson Peabody School for Young Girls in Boston, which is where my mates on HMS Dolphin had dumped me after finding out that I was a girl, which was against the rules. Their rules, not mine.

Aye, they put me off the Dolphin even though I was a perfectly good sailor and was just made Midshipman, even. Before I was found out, the only person aboard the warship who knew that I was a girl was my own dear Jaimy, to whose home I am now going to travel to find out what's up with him. I ain't heard anything from him since he left on the Dolphin, leaving me behind, alone and friendless, and in a strange land.

Things didn't go at all smooth for me at the Lawson Peabody School, where they tried to make a lady out of me and I gotta say they didn't have much luck in the attempt. In fact, there wasn't that much left of the Lawson Peabody, itself, after I got done and lit out, the school being up in flames behind me, with a good bit of Boston burning merrily as well. And it wasn't all my fault, either, no matter what anyone tells you.

After I got clear out of the city, I had run on down to New Bedford, a port well to the south of Boston, and 'twas there I found a whaling ship, the Pequod, lying alongside a busy wharf. Bold as brass, I walked up to the table on the pier where they was signing up sailors for the voyage and applied for a berth, presenting myself as a seasoned sailor, which I was. This got a good, hearty rouse of laughter from all assembled, but against all odds, I was signed on as companion to the Captain's wife, who was great with child, and as teacher for her little boy, as well as being cook's helper. The Captain was taking his family along, which whalers often do, until such time as his wife had her baby, and then wife and children would be debarked in England to stay with relatives for a time. So, not only would I get passage back to London and maybe to Jaimy, but I would also get a quarter of a share of the ship's profits as pay. And, I would surely pick up more knowledge of seamanship, which I know will come in handy someday. Although I've had my ups and downs, I've always been pretty lucky, by and large.

After provisioning and signing up the rest of the crew, we finally set sail and left the land behind us. I soon found that bein' on a whaler wasn't like bein' on a Royal Navy Ship, no, not at all. The Captain is still the Lord and Master of everything and everybody, but the day-to-day hard discipline and rigid regulations just ain't there. Everyone is bent toward the Almighty Profit and anyone who can add to that profit is held in high esteem, and anyone who slacks off ain't treated all that kindly. So, when they found that I could steer a course, trim a sail, and stand a watch, I was added to the watch list. Daytime watches only, for a while, and then, after they knew they could trust me, nighttimes, too.

The crew was a rough bunch, of course, but I was used to that, and I quickly made friends with them all- especially with Ishmael, and, of course, with Patience, she bein' the Captain's wife and a perfect joy. Heavy with child though she was, she was always jolly and brave right up to and through the birth of her fine, fat daughter. In addition to my other duties, it was understood that I was brought on board to help Patience during the birthing, but when her time did come in the middle of the night in the midst of a living gale, I was no help at all. She had to comfort me when it was all going on, which was probably not what the Captain had in mind when he signed me on board. But I did hold her hand, and when the baby finally slid out all slippery and bloody, I picked it up by its feet as I was told and I saw that it was a girl. I slapped her tiny bum and she coughed and started wailing, and I laid her down and cut and tied the cord as I was told, and then I cleaned up mother and child as best I could in the tiny cabin that was pitchin' up and down and back and forth with the wind howlin' like a demented banshee outside. I got a clean cloth wrapped around the baby and put her on Patience's breast and kept sayin' I'm sorry, I'm sorry over and over, but Patience said I did just fine and she wanted no other midwife in attendance for future babies, none other than Jacky Faber. As for Jacky Faber, her own self, she's more than a bit glad that her own adventures in birthin' babies are at least a few years off in the future.

So I'm bouncing merrily on down the pier, gratefully suckin' in the air of my own country once again, and there I see the Captain and Patience, who's got our lovely little Prudence cradled in her arm and my star pupil, Increase, by her side. I embrace Patience in farewell and we babble our good-byes and I give Increase a kiss, him being the son of the Captain and his missus. Part of my job was teachin' him his numbers and letters, and though he was a willing and bright student, he really wanted to be out and off in the riggin' and I could hardly blame him, bein' of a like mind myself. I give him the farewell kiss and he says, "Yuck," and rubs the kiss from his cheek, but I don't hold it against him, and just ruffle his curly head fondly. He is a good boy.

The family is leaving this morning to stay with relatives in Maidstone until this voyage of the Pequod is over, and so my time on the ship is also over- no good reason to have a lone female on board, so off I am booted.

As the Captain handed his family up into the coach, he turned to me and said, "Farewell, Faber, and Godspeed. Know thee that I hate to lose a good sailor," which for him was a long speech. 'Cept when he was goin' on about that whale. Then he never seemed to stop. I nodded and thanked him for taking me on board and he turned and left, his peg leg tappin' on the pier as he went 'round the coach to the other door to mount up. When he is in, the coachman gives a chuck to the horses and they are gone.

On the wharf, too, is the First Mate, Mr. Starbuck. He is overseein' the off-loadin' of the barrels of the whale oil, it already being sold and paid for. My own quarter share is snug in my money belt, the gold coins being warmed by my belly, next to the coins I had earned playin' and dancin' in the Pig and Whistle in Boston and actin' in the theater with Mr. Fennel and Mr. Bean.

We had excellent luck in baggin' the poor whales, which nobody can ever again tell me is just cold fishes- I learned that to be true the first time I jumped onto the back of a whale brought alongside and felt the heat of its dying body comin' up at me. The men were there with flensing tools, blades with long handles for strippin' off the blubber that would be passed up on hooks to the deck where the great cauldrons were fired up for boiling down the blubber into oil for the lamps of Britain and America. I had a different job and a disgustin' job it was: Along with the big barrels of oil there on the deck, there are smaller casks of spermaceti, an oily, waxy goo that's taken out of a pit in the sperm whale's head- and that was my ...

“A swashbuckling saga with a decidedly unconventional heroine.” —Booklist

“Jacky is a wonderful character, full of high spirits, brains, and heart. . . . Highly recommended for fans of historical fiction and pirates.” —SLJ 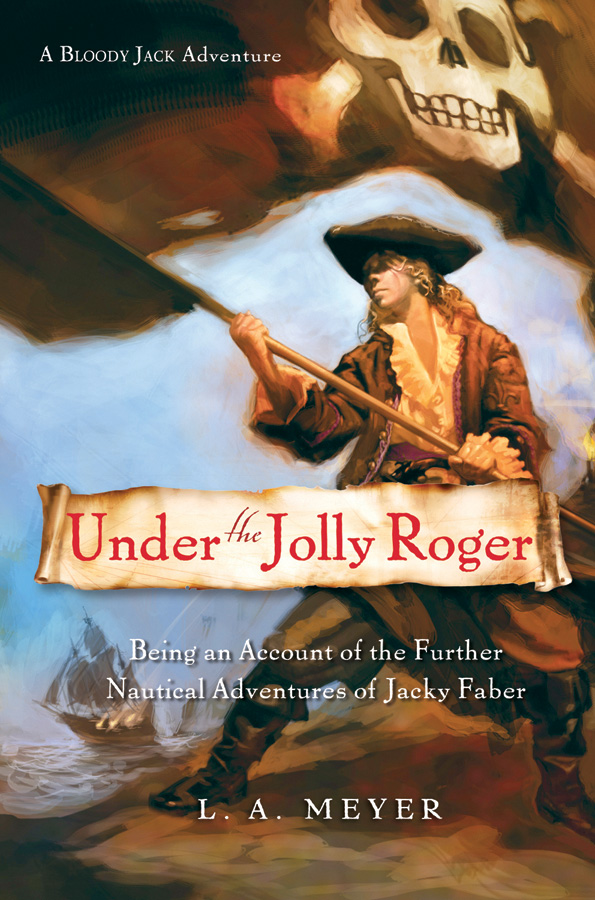