Triumph: The Untold Story of Jesse Owens and Hitler's Olympics

This New York Times–bestselling author’s account of the 1936 Olympics in Berlin offers a “vivid portrait not just of Owens but of ’30s Germany and America” (Sports Illustrated).

This New York Times best-selling author’s account of the 1936 Olympics in Berlin offers a “vivid portrait not just of Owens but of ’30s Germany and America” (Sports Illustrated).

At the 1936 Olympics, against a backdrop of swastikas and goose-stepping storm troopers, an African American son of sharecroppers won a staggering four gold medals, single-handedly falsifying Hitler’s myth of Aryan supremacy.

The story of Jesse Owens at the Berlin games is that of an athletic performance that transcends sports. It is also the intimate and complex tale of one remarkable man’s courage. Drawing on unprecedented access to the Owens family, previously unpublished interviews, and archival research, Jeremy Schaap transports us to Germany and tells the dramatic tale of Owens and his fellow athletes at the contest dubbed the Nazi Olympics.

With incisive reporting and rich storytelling, Schaap reveals what really happened over those tense, exhilarating weeks in a “snappy and dramatic” work of sports history (Publishers Weekly).

“A remarkable job of tackling a complex subject and bringing it to life.” ??—?? John Feinstein

About the author
Jeremy Schaap

Jeremy Schaap is the author of the New York Times bestseller Cinderella Man. An ESPN anchor and national correspondent, his work has been published in Sports Illustrated, ESPN the Magazine, Time, Parade, TV Guide, and the New York Times. He has also appeared on ABC's World News Tonight and the CBS Evening News. He is the son of the award-winning journalist Dick Schaap. 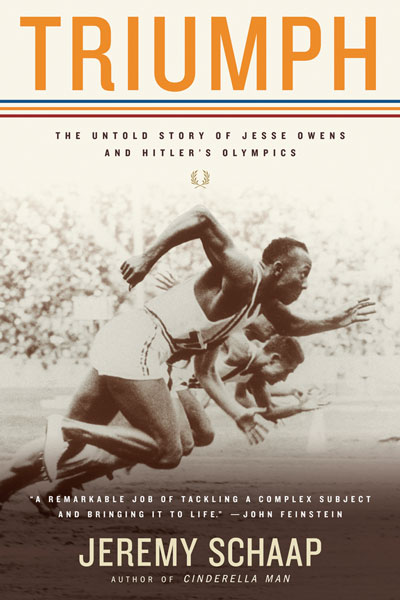