Tiny Habits: The Small Changes That Change Everything

The world’s leading expert on habit formation shows how you can have a happier, healthier life: by starting small.

The world’s leading expert on habit formation shows how you can have a happier, healthier life: by starting small.

When it comes to change, TINY IS MIGHTY. Start with two pushups a day, not a two-hour workout; or five deep breaths each morning rather than an hour of meditation. In TINY HABITS, B.J. Fogg brings his experience coaching more than 40,000 people to help you lose weight, de-stress, sleep better, or achieve any goal of your choice.  You just need Fogg’s behavior formula: make it easy, make it fit your life, and make it rewarding. Whenever you get in your car, take one yoga breath. Smile.  Whenever you get in bed, turn off your phone. Give yourself a high five.

Change can be easy—once it starts, it grows.  Let B.J. Fogg show you exactly how.

About the author
BJ Fogg

BJ FOGG is the founder and director of the Behavior Design Lab at Stanford. In addition to his research, Fogg teaches Boot Camps in Behavior Design for industry innovators and also leads the Tiny Habits Academy helping people around the world.  One of Fortune's "10 New Gurus You Should Know," he lives in Northern California and Maui.

Change Can Be Easy (and Fun)

At least when it comes to change.

Over the last twenty years, I’ve found that most everyone wants to make some kind of change: eat healthier, lose weight, exercise more, reduce stress, get better sleep. We want to be better parents and partners. We want to be more productive and creative. But the alarming levels of obesity, sleeplessness, and stress reported by the media—and seen in my Stanford lab’s research—tell me there is a painful gap between what people want and what they actually do. The disconnect between want and do has been blamed on a lot of things—but people blame it on themselves for the most part. They internalize the cultural message of “It’s your fault! You should exercise more, but you aren’t doing it. Shame on you!”

I am here to say: It isn’t your fault.

And creating positive change isn’t as hard as you think.

For too many years, myths, misconceptions, and well-meaning but unscientific advice have set you up to fail. If you’ve attempted change in the past and haven’t seen results, you may have concluded that change is hard or that you can’t succeed because you lack motivation. Neither is accurate. The problem is with the approach itself, not with you. Think of it this way: If you tried putting together a chest of drawers with faulty instructions and parts missing, you would feel frustrated. But you probably wouldn’t blame yourself for this, would you? You would blame the manufacturer instead. When it comes to failed attempts at change, we almost never blame the “manufacturer.” We blame ourselves.

When our results fall short of our expectations, the inner critic finds an opening and steps on stage. Many of us believe that if we fail to be more productive, lose weight, or exercise regularly then something must be wrong with us. If only we were better people, we wouldn’t have failed. If only we had followed that program to the letter or kept those promises to ourselves, we would have succeeded. We just need to get our act together and pull ourselves up by our bootstraps and do better. Right?

We are not the problem.

Our approach to change is. It’s a design flaw—not a personal flaw.

Building habits and creating positive change can be easy—if you have the right approach. A system based on how human psychology really works. A process that makes change easier. Tools that don’t rely on guesswork or faulty principles.

Popular thinking about habit formation and change feeds into our impulse to set unrealistic expectations. We know habits matter; we just need more good habits and fewer bad ones. But here we are, still struggling to change. Still thinking it’s our fault. All my research and hands-on experience tell me that this is exactly the wrong mindset. In order to design successful habits and change your behaviors, you should do three things.

This may not feel intuitive. I know it doesn’t come naturally to everyone. Self-criticism is its own kind of habit. For some people, blaming yourself is just where your brain goes—it’s like a sled in the snow, slipping into a well-worn path down the hill.

If you follow the Tiny Habits process, you’ll start taking a different route. Snow will quickly start covering those self-doubting grooves. The new path will soon be the default path. This happens quickly, because with Tiny Habits you change best by feeling good—not by feeling bad. The process doesn’t require you to rely on willpower, or set up accountability measures, or promise yourself rewards. There is no magic number of days you have to do something. Those approaches aren’t based on the way habits really work, and as a result, they aren’t reliable methods for change. And they often make us feel bad.

This book says good-bye to all that change angst and—even more important—shows you how to easily and joyfully bridge the gap (no matter the size) between who you are now and who you want to be. Tiny Habits will be your guide to disrupting the old approach and replacing it with an entirely new framework for change.

The system I’ll share with you is not guesswork. I’ve road tested the process with more than 40,000 people during years of research and refinement. By coaching all these people personally and gathering data week by week, I know that the Tiny Habits method works. It replaces misunderstandings with proven principles, and it trades prescriptions for process.

An Amazon Best Book of January 2020

As seen on the Today Show!

As seen on the Hallmark Channel's Home & Family

A "Biggest Book of 2020" by Arianna Huffington

“Fogg’s method has great potential to promote altered behavior in those who have sought help in other ventures with little success.”—Library Journal, STARRED.

“Myth-breaking and persuasive research...balancing useful practices (including many charts, tables, and graphs) with his own story of personal transformation, Fogg’s convincing method will help any reader reconfigure their habits.”—Publishers Weekly

“Deeply researched and highly practical, this book will be a valuable resource to anyone interested in changing their behavior (that is, all of us).” –Gretchen Rubin

“BJ Fogg's ideas on self-change are uniquely relevant, approachable, and powerful. I can't recommend this book highly enough.” –Ramit Sethi, New York Times best selling author of I Will Teach You To Be Rich

“BJ Fogg’s work is transformative….We use Tiny Habits at Amen Clinics with our patients, online students, and readers. It is simple, easy-to-implement, and it works.” –Daniel G. Amen, MD, New York Times best selling author of Change Your Brain, Change Your Life

“[Tiny Habits] demystifies the little behaviors that add up to what is, in essence, our identity. Understanding these micro behaviors [is] critical if you want achieve big outcomes like losing weight or building a company.” –Tony Fadell, inventor of the iPod and Co-inventor of the iPhone 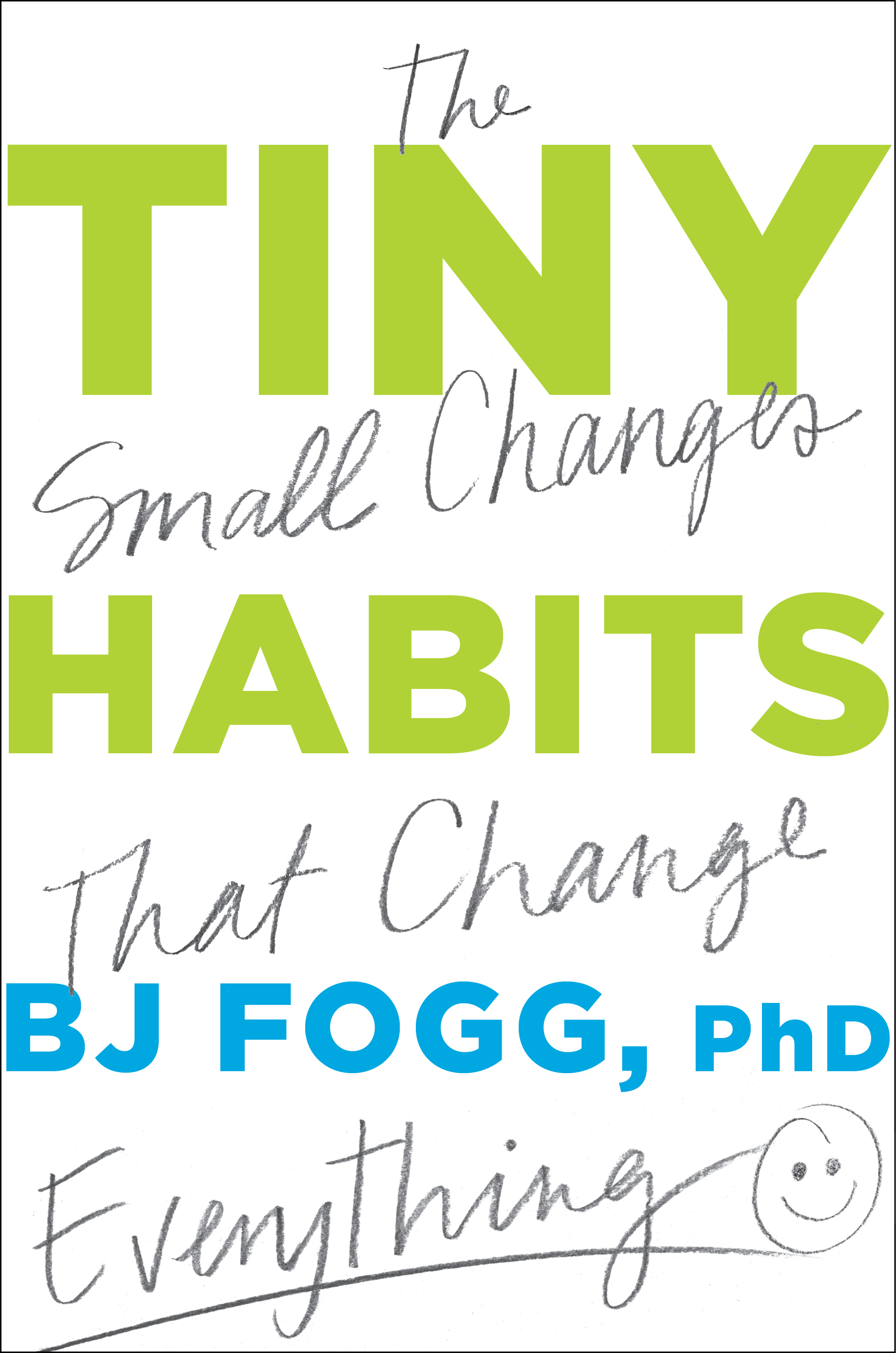