If Howard had known the old hag was a witch, he never would have taunted her. But he did, and she did what witches do--cursed him--and now he's a goose, which to tell you the truth, is not as serene and peaceful as it might look from the shore. People try to kill geese, for crying out loud, and the other geese are none too nice to newcomers. Howard is desperate to become a human again so he can show that old witch a thing or two.

But the only way to break the curse is to do three good deeds--and how can you help others when you've got webbed feet, wings for hands, and can't say anything but "Honk"?

About the author
Vivian Vande Velde

Vivian Vande Velde has written many books for teen and middle grade readers, including Heir Apparent, User Unfriendly, All Hallow's Eve: 13 Stories, Three Good Deeds, Now You See It ..., and the Edgar Award–winning Never Trust a Dead Man. She lives in Rochester, New York. Visit her website at www.vivianvandevelde.com.

Though all the children of the village of Dumphrey's Mill called the woman whose little house sat at the edge of Goose Pond "the old witch," Howard never suspected till too late that she truly was a witch.

She was old and she was ugly, and to the children that was reason enough to call her a witch.

It was also reason enough to tag along behind her those times when she came into the village to sell milk from her goats or to buy grain from the miller. Howard was not the best nor the worst of the children to ever be born in Dumphrey's Mill. So when the old witch would come to town, Howard did not suggest it might be fun to tease her; but neither did he suggest it might not be nice. Instead, he would join in with the others and imitate the way she walked-her shoulders hunched, her right foot dragging behind her-until she'd notice and shake her cane at them, which caused them to flee with delighted screeches of terror.

One spring day when the witch had not come to town, Howard and his best friend, Roscoe, noticed the freshly laundered sheets Roscoe's mother had hung on the line to dry. Because there was nothing to do, and because they were boys, they thought the sheets on the line made a fine cave. One thing led to another, and in short order the cave was in pretty serious need of more laundering.

At the exact moment Roscoe's mother discovered this, it was Roscoe's turn to be the dragon in the cave; Howard, as the knight, was in the side yard looking for a stick that could pass for a sword. So Roscoe's mother never saw Howard as she dragged Roscoe by the ear into the house, to the accompaniment of some very un-dragonlike yelps.

Howard could have knocked on the door and volunteered the information that the knight versus cave-dragon game had in fact been his idea, but it was too late to save Roscoe anyway, so Howard decided it was no use sacrificing himself for nothing.

But without Roscoe, there was very little excitement in the village of Dumphrey's Mill.

That was when Howard decided he would go to Goose Pond and see if the geese had laid any eggs yet.

Even though the geese there were wild, everyone knew the old witch was very protective of them: As soon as the snow melted every spring, she pulled weeds from the edge of the pond so that when the geese returned from their winter home in the south they would find the area ready for building their nests. And throughout the spring and summer, she threw out crusts of bread for them to eat. When it was time for them to return to the warmth of the south, she would stand on the edge of the pond and shout good-byes, calling each by name.

Howard thought this was ridiculous behavior because everyone knows both geese and goose eggs are for eating.

When Howard arrived at Goose Pond that spring day, he stood hidden at the edge of the trees and looked over the old witch's yard to make sure she wasn't someplace she'd be able to see him.

As there was no sign of her, Howard crept to the edge of the pond and began searching for nests.

He found one quickly.

By the way the goose who'd been sitting there hissed and flapped her wings, Howard could tell that she was indeed guarding eggs.

He waved his cap and managed to startle her away long enough to snatch three of the eight eggs from the nest.

"You don't need so many," he assured her as she tried to peck him.

He set one of the eggs on the edge of the grass and rolled it toward the water's edge to distract the mother goose. This did indeed confuse her. As she rushed to save that one, Howard grabbed another, put all three into his cap, and started to run away.

Except something caught in his feet, and he fell hard.

When he looked up, he saw that what had tripped him had been the old witch's cane.

"This is a good naughty-boy-makes-good book for reluctant or easy-chapter-book readers. It's clear, uncomplicated, and entertaining."--School Library Journal 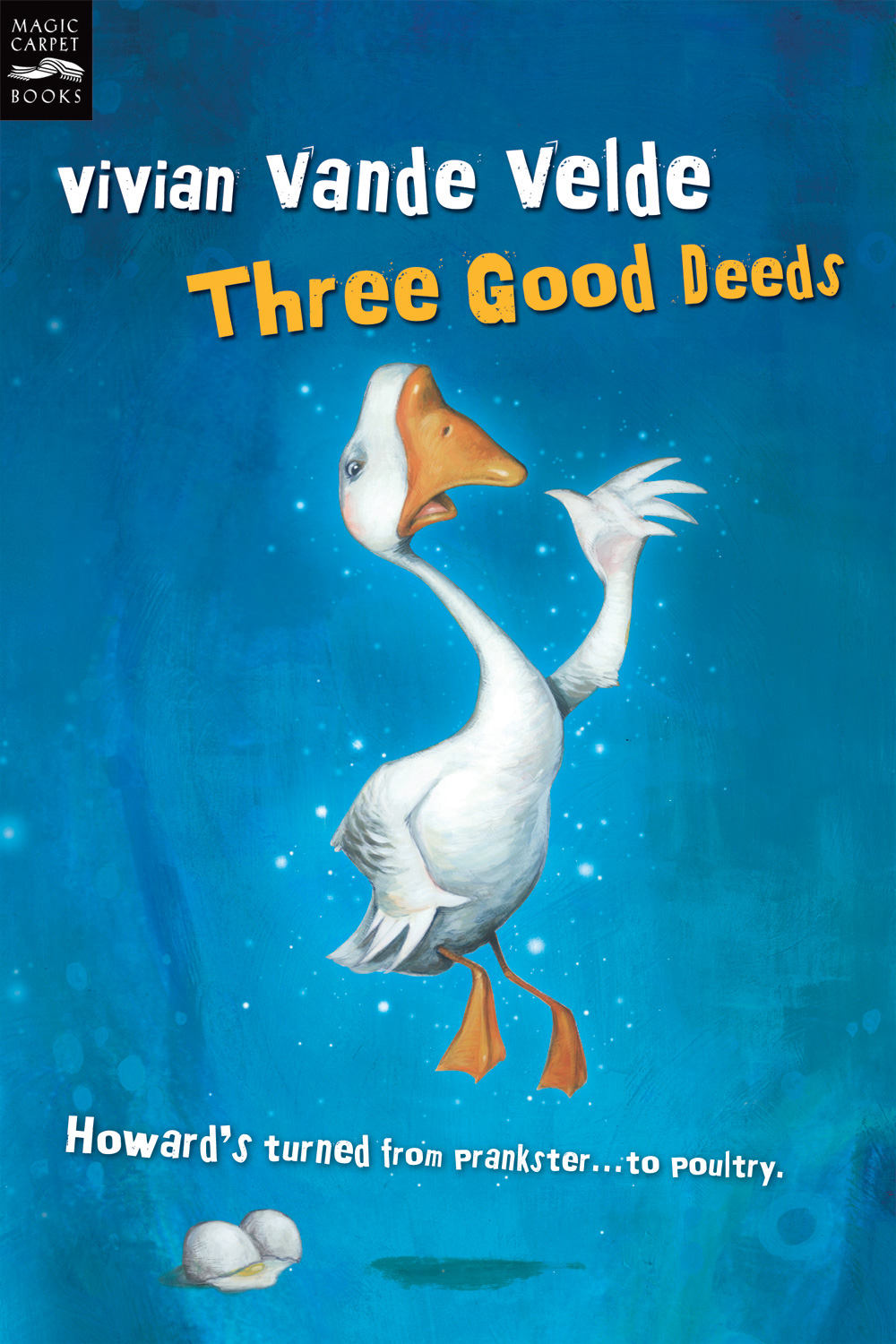