Those Who Save Us

For fifty years, Anna Schlemmer has refused to talk about her life in Germany during World War II. Her daughter, Trudy, was only three when she and her mother were liberated by an American soldier and went to live with him in Minnesota. Trudy's sole evidence of the past is an old photograph: a family portrait showing Anna, Trudy, and a Nazi officer, the Obersturmfuhrer of Buchenwald.

Driven by the guilt of her heritage, Trudy, now a professor of German history, begins investigating the past and finally unearths the dramatic and heartbreaking truth of her mother's life.

Combining a passionate, doomed love story, a vivid evocation of life during the war, and a poignant mother/daughter drama, Those Who Save Us is a profound exploration of what we endure to survive and the legacy of shame.

About the author
Jenna Blum

JENNA BLUM is the New York Times bestselling author of The Stormchasers. Jenna is of German and Jewish descent and spent four years working for Steven Spielberg's Shoah Foundation, interviewing Holocaust survivors. She teaches fiction for Grub Street Writers. Please visit Jenna at www.jennablum.com, on Facebook and on Twitter: @jenna_blum.

THE EVENING IS TYPICAL ENOUGH UNTIL THE DOG BEGINS to choke. And even then, at first, Anna doesn't bother to turn from the Rouladen she is stuffing for the dinner that she and her father, Gerhard, will share, for the dachshund's energetic gagging doesn't strike her as anything unusual. The dog, Spaetzle, is forever eating something he shouldn't, savaging chicken carcasses and consuming heels of bread without chewing, and such greed is inevitably followed by retching. Privately, Anna thinks him a horrid little creature and has ever since he was first presented to her five years ago on her fourteenth birthday, a gift from her father just after her mother's death, as if in compensation. It is perhaps unfair to resent Spaetzle for this, but he is also chronically ill-tempered, snapping with his yellowed fangs at everyone except Gerhard; he is really her father's pet. And grossly fat, as Gerhard is always slipping him tidbits, despite his bellowed admonitions to Anna of Do not! Feed! The dog! From! The table!

Now Anna ignores Spaetzle, wishing her hands were not otherwise engaged in the mixing bowl so she could bring them to her ears, but when the choking continues she looks at him with some alarm. He is gasping for breath between rounds of rmmmp rmmmp rmmmp noises, foam flecking his long muzzle. Anna abandons the Rouladen and bends over him, forcing his jaws open to get at whatever is blocking his windpipe, but her fingers, already meat-slick, find no purchase in the dog's slippery throat. He seems to be succeeding in his struggle to swallow the object, yet Anna is not willing to leave the outcome to chance. What if what he has eaten is poisonous? What if the dog should die? With a fearful glance in the direction of her father's study, Anna throws on her coat, seizes the dachshund, and races from the house without even removing her grimy apron.

There being no time to bring Spaetzle to her regular doctor in the heart of Weimar, Anna decides to try a closer clinic she has never visited but often passed during her daily errands, on the shabby outskirts of town. She runs the entire quarter kilometer, fighting to retain her hold on the dog, who writhes indignantly in her arms, a slippery tube of muscle. Beneath guttering gaslamps, over rotting October leaves and sidewalks heaved by decades' worth of freeze and thaw: finally Anna rounds a corner into a row of narrow neglected houses still pockmarked with scars from the last war, and there is the bronze nameplate: HERR DOKTOR MAXIMILIAN STERN. Anna bumps the door open with a hip and rushes through the reception area to the examining room.

She finds the Herr Doktor pressing a stethoscope to the chest of a woman whose flesh ripples like lard from her muslin brassiere. The patient catches sight of Anna before the practitioner: she points and emits a small breathy scream. The Doktor jumps and straightens, startled, and the woman grabs her bosom and moans.

Have a seat in the waiting room, whoever you are, Herr Doktor Stern snaps. I'll be with you shortly.

The Doktor turns, raising an eyebrow.

You may dress, Frau Rosenberg, he tells his patient. Your bronchitis is very mild, nothing to be alarmed about. I'll write you the usual prescription. Now, if you'll excuse me, I must attend to this poor animal.

Well! says the woman, pulling on her shirtwaist. Well! I never expected- to be forsaken for a dog.

She grabs her coat and pushes past Anna with a dramatic wheeze.

As the door slams the Doktor comes quickly to Anna and relieves her of her burden, and she imagines that he shares with her the faintest smile of complicity over his spectacles. She lowers her head, anticipating the second, startled glance of appreciation that men invariably give her. But instead she hears him walking away, and when she looks up again his back is to her, bent over the dachshund on the table.

Well, what have we here, he murmurs.

Anna watches anxiously as he reaches into the dog's mouth, then turns to prepare a syringe. She takes some comfort from the deft movement of his hands, the play of muscles beneath his thin shirt. He is a tall, slender fellow, bordering on gaunt. He also seems oddly familiar, though Anna certainly has not been here before.

As grateful as I am to you for rescuing me from Frau Rosenberg, I must point out that this is a most unorthodox visit, Fräulein, says the Doktor as he works. Are you perhaps under the impression that I'm a veterinarian? Or did you think a Jewish practitioner would be grateful to treat even a dog?

Jewish? Anna blinks at the Doktor's blond hair, which, though straight, stands up in whorls and spikes. She remembers belatedly the Star of David painted on the clinic door. Of course, she has known this is the Jewish Quarter, but in her panic she has not given it a thought.

No, no, Anna protests. Of course not. I brought him here because you were closest-

She realizes how this sounds and winces.

I'm sorry, she says. I didn't mean to offend.

The Doktor smiles at her over one shoulder.

No, it's I who should apologize, he says. It was meant as a joke, but it was a crude one. In these times I'm indeed grateful for any patients, whether they're fellow Jews or dachshunds. You are Aryan, yes, Fräulein? You do know you have broken the law by coming here at all.

Anna nods, although this too she has not considered. The Doktor returns his attention to the dog.

He holds something up for Anna's inspection: part of one of her sanitary napkins, slick with spit and spotted with blood.

Anna claps her palms to her face, mortified.

Oh, God in heaven, she says. That wretched dog!

Herr Doktor Stern laughs and dispenses the napkin in a rubbish bin.

It could have been worse, he says.

I can't imagine how-

He could have eaten something truly poisonous. Chocolate, for instance.

For dogs it is, Fräulein.

I didn't know that.

Well, now you do.

I'm not sure that I wouldn't have preferred that, she says, given the circumstances.

The Doktor laughs, a short bark, and moves to lather his hands at the sink.

You mustn't be embarrassed, Fräulein, he says. Nihil humanum mihi alienum est-nothing human is alien to me. Nor canine, for that matter. But you should be more careful what you feed that little fellow-for meals, that is. He is far too fat.

That's my father's doing, Anna tells him. He is constantly slipping the dog scraps from the table.

Now Herr Doktor Stern does give her another, longer look.

Ah, says the Doktor, and lifts Spaetzle from the examining table. He settles the dog in Anna's arms. The dachshund's eyes are glazed; limp, he seems to weigh as much as a paving stone.

A mild sedative, the Doktor explains, and muscle relaxant. So I could extract the...In any case, he'll be up to his old tricks in no time, provided you keep him away from sweets and other, shall we say, indigestibles?

He lowers his spectacles and smiles at Anna, who stands returning it longer than she should. Then she remembers herself and shifts the dog to fumble awkwardly in her coat pocket for her money purse.

How much do I owe you? she asks.

The Doktor waves a hand.

No charge, he says. It is the least I can do, considering my last ill-fated interaction with your family.

He turns away, and Anna thinks, Of course. Now she knows where she has seen him before. He attended Anna's mother in the final days o...

PRAISE FOR THOSE WHO SAVE US

"Jenna Blum's accomplished first novel, Those Who Save Us, is both vast and intimate in its reach . . . Utterly believable . . .An absorbing tale of two women's struggles with the burdens and responsibilities of remembrance."-THE BOSTON GLOBE

"The book's power . . . [lies] in examining the emotional and moral gray area between heroism and collaboration . . .Those Who Save Us bursts with provocative questions about the ambiguous possibilities of culpability."-SAN FRANCISCO CHRONICLE 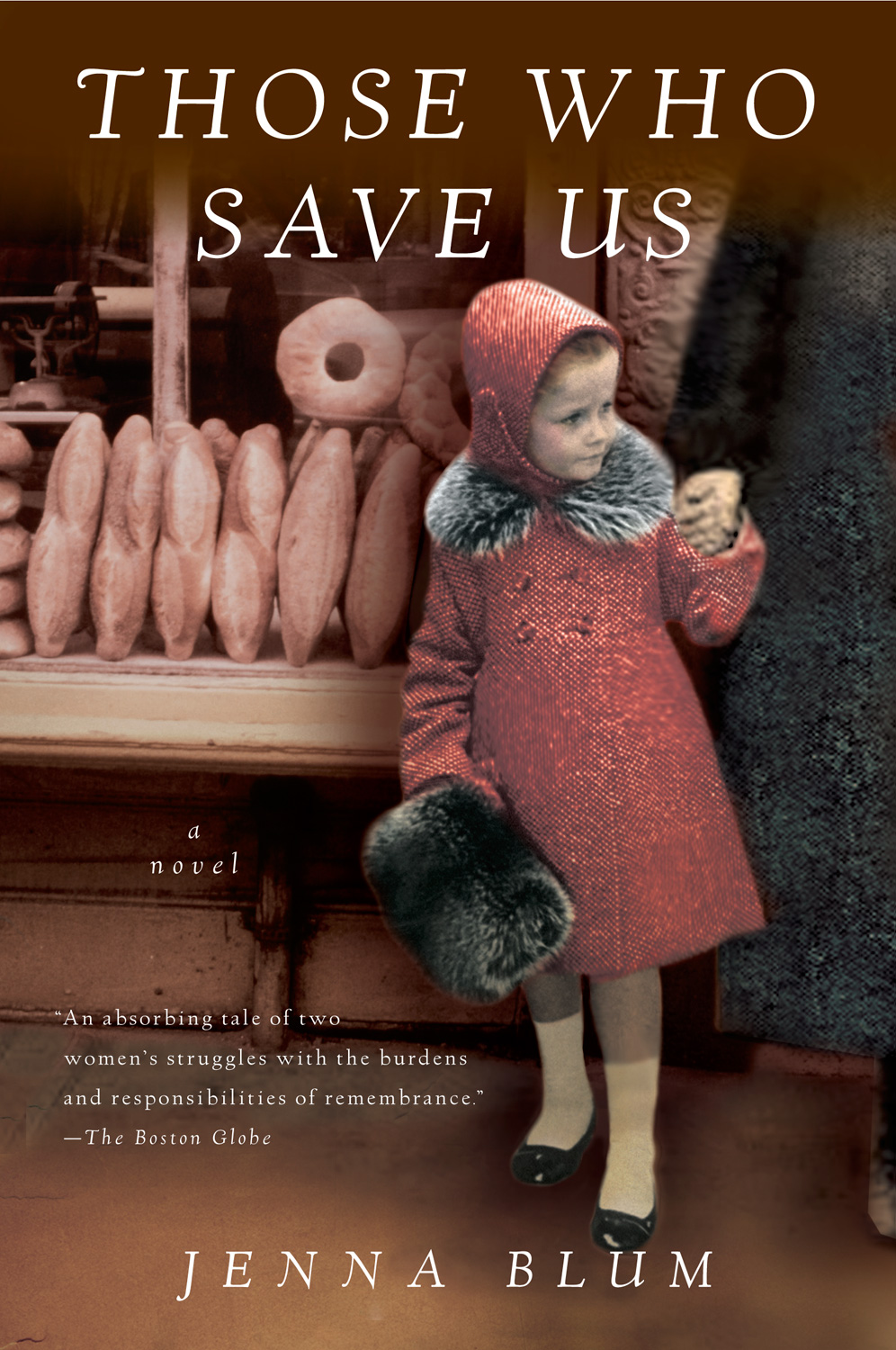