Theodosia and the Last Pharaoh

In this fourth book in the series, Theodosia sets off to Egypt to return the Emerald Tablet—embedded with the knowledge of some of the ancient world’s most guarded secrets. Accompanied by her cat, Isis (smuggled along in a basket), Theo plans to return the artifact, then explore the mysteries surrounding her own birth and oh, yes— help her mother dig up treasures on her archeological expedition.

But nothing ever works out as planned, especially when a precious treasure appears suddenly, and then just as suddenly disappears . . . When the Serpents of Chaos get involved, Theo finds she’s digging up a lot more than she expected!

In this fourth book in the series, Theodosia sets off to Egypt to return the Emerald Tablet—embedded with the knowledge of some of the ancient world’s most guarded secrets. Accompanied by her cat, Isis (smuggled along in a basket), Theo plans to return the artifact, then explore the mysteries surrounding her own birth and oh, yes— help her mother dig up treasures on her archeological expedition.

But nothing ever works out as planned, especially when a precious treasure appears suddenly, and then just as suddenly disappears . . . When the Serpents of Chaos get involved, Theo finds she’s digging up a lot more than she expected!

About the author
R. L. LaFevers

Yoko Tanaka lives in Los Angeles and Bangkok with her husband and three cats. In addition to illustrating the Theodosia books, she has also illustrated The Magician’s Elephant by Kate DiCamillo and a picture book, Sparrow Girl by Sara Pennypacker. Her artwork can be found at yokotanaka.com

Excerpts
Chapter One: The Wretched Reticule November 1907 Even with the windows closed, the sand still managed to creep into the railway car and find its way into the most inconvenient places. I shifted uncomfortably on the seat, blew the dust off the pages of my journal, and focused on the list I was composing. Seeing things laid out in black and white often helps me think better. Things to Do in Egypt

I studied the list. It didn’t look quite long enough, frankly. A mere seven things shouldn’t feel as if the weight of the known world were resting on my shoulders, should it?

A low, unhappy warble emerged from the basket on the seat next to me. I glanced anxiously at Mother, who raised a warning eyebrow. Oh, yes.

8.   Keep Isis out from under Mother’s feet at all times.

I slipped my pencil into my pocket, then put my fingers through one of the slats in the basket to reassure Isis that I was still there. When I felt the feather-light touch of her soft, warm nose, I inched my fingers around to scratch behind her ears. That seemed to appease her somewhat. She didn’t quite purr, but she almost purred, and that was victory enough for me. Mother had been furious when she’d learned I’d snuck Isis along on the trip. Luckily, we’d been far out to sea and it was too late to turn back. I know it was wrong of me to smuggle her along and not only because it annoyed Mother (although I do try to avoid needlessly annoying my parents whenever possible—there are enough times when I simply have no choice). The reason it was wrong had more to do with Isis herself. She wasn’t fond of cooped-up spaces, nor was she fond of long journeys on the ocean. I knew she would be miserable until we arrived in Egypt. But I also knew I would be even more miserable without her company for months and months. Besides, she had some . . . power, a special quality that had a strange effect on people that might come in handy on the trip. If I was going to be thousands of miles from everyone I knew and needed to tackle dangerous duties on my own, then it seemed to me I ought to have at least one ally I could count on. Honestly! Mother was lucky I hadn’t tried to smuggle Sticky Will along on the trip. Although it was difficult enough smuggling a cat—smuggling a twelve-year-old street urchin with a talent for picking pockets would have been impossible. With an earsplitting screech of metal and a final sickly chug, the train pulled into the Cairo station. I had to brace my feet to keep from pitching to the floor, and flung my arm out to prevent Isis and her basket from tumbling off the seat. Across from me, Mother rocked backwards as the train braked, then pitched forward, her head nearly landing in my lap. She quickly sat back up and adjusted her hat. "We’re here!" she said cheerfully. "We’re here," I agreed, carefully setting the basket to rights. "Collect your things, dear. We’ll be de-boarding in a few minutes." "Yes, Mother." I took my hand from Isis’s basket, annoyed to find that the silken cords to my reticule had gotten wrapped around my wrist again. I must say, fashion is a mystery to me. How on earth can ladies stroll around with a beastly reticule wrapped around their wrists? The cords get twisted and tangled, then grow so tight it feels as if they have cut off all the circulation to one’s hand. Not only that, but the horrid thing bumps and thumps against one’s leg with every step. Sighing with annoyance, I jerked at the silken cords, trying to get the blood flowing back into my hand. "What are you doing?" Mother asked. "Straightening this wretched thing out," I muttered, watching the reticule spin round and round as I untwisted the cords. "I thought you loved that little purse! If I remember correctly, you begged and begged for me to buy it for you." I bit back a sigh of frustration. Why do grownups always remember the things you wish they wouldn’t? "Well, that was before I knew what a lot of bother it’d be." What I’d really wanted was a muff, but even in November, Egypt was too hot for one. It would have made a wonderful hiding place, though. One where I could have kept my hands safely wrapped around the— "Here, give me that." Mother reached for the purse. "No!" I jerked it out of her reach. "I need to practice, don’t you think? I’ll be a grownup before you know it, and I’ll need to know how to carry a reticule properly. If I don’t learn now, when will I?" Mother stared at me for a long moment, then shook her head. "Your grandmother is right. You are a peculiar child." Her words stung me to the quick. Peculiar? Peculiar! Seeing the stricken look on my face, she gave me a smile she meant to be comforting. "Don’t worry, dear. We all go through peculiar stages, but we grow out of them." It did not make me feel one whit better that she was hoping—counting on the fact—that I would grow into someone different from who I was. All the joy and promise of this trip evaporated. One part of me longed to explain the true reasons I acted so peculiar, but I didn’t think the true reasons would make her feel any better. In fact, she would most likely ship me off to a sanatorium if she knew that I spent most of my time removing black magic and ancient curses from rare and powerful artifacts in the Museum of Legends and Antiquities that my parents oversaw back in London. Or that I spent quite a lot of energy avoiding secret societies that would love to get their hands on those artifacts and use them for their own evil ends. No, I was fairly certain Mother wouldn’t consider those reasons any less peculiar. Completely unaware of the turmoil inside me, Mother stood and brushed off her skirts. "Get your things, dear." Another low-throated warble emerged from the basket on the bench next to me. "Isis doesn’t like being called a thing," I pointed out. Mother stopped her g...

Theodosia and the Serpents of Chaos

– Selected as one of the Top Ten Crime Fiction for Youth 2008, Booklist on-line

– A Bank Street College Best Children's Book of the Year 2008

"A sure bet for Harry Potter fans.” – Booklist, starred review

Theodosia and the Staff of Osiris by R. L. LaFevers

– Nominated for the 2009 Cybils awards

“Clever and exciting, just like the previous book, this also features a layered relationship between Theodosia and her grandmother. Nonstop action in a delightfully English package.” - Booklist

Theodosia and the Eyes of Horus (spring ’10) 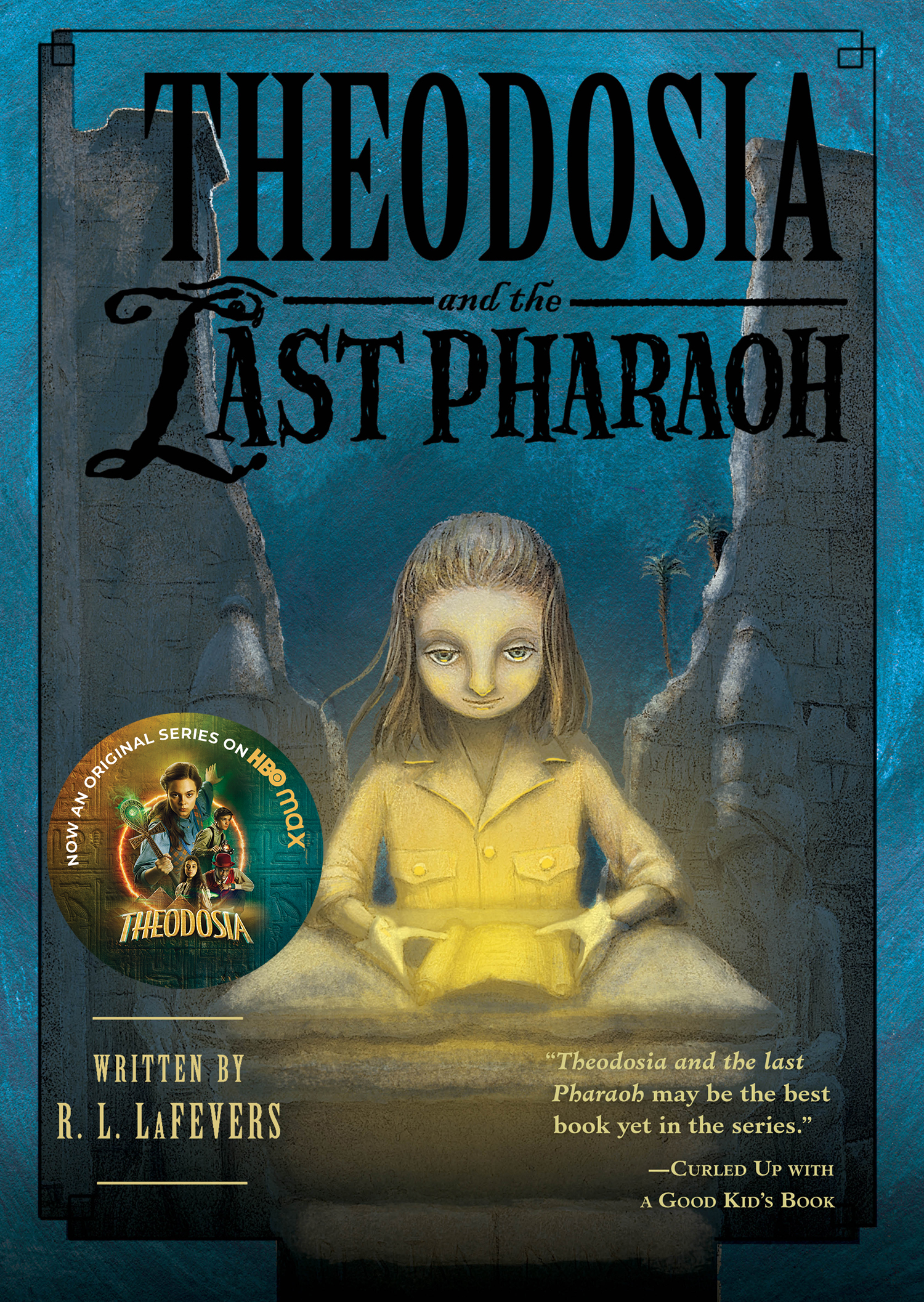