Novelist Ivan Doig revisits the American west in the early twentieth century, bringing to life the eccentric individuals and idiosyncratic institutions that made it thrive.

“Can't cook but doesn't bite." So begins the newspaper ad offering the services of an "A-1 housekeeper, sound morals, exceptional disposition" that draws the attention of widower Oliver Milliron in the fall of 1909. That unforgettable season deposits the ever-whistling Rose Llewellyn and her font-of-knowledge brother, Morris Morgan, in Marias Coulee along with a stampede of homesteaders drawn by the promise of the Big Ditch—a gargantuan irrigation project intended to make the Montana prairie bloom. When the schoolmarm runs off with an itinerant preacher, Morris is pressed into service, setting the stage for the "several kinds of education"—none of them of the textbook variety—Morris and Rose will bring to Oliver, his three sons, and the rambunctious students in the region's one-room schoolhouse. A paean to a way of life that has long since vanished, The Whistling Season is Ivan Doig at his evocative best.

About the author
Ivan Doig

Ivan Doig (1939-2015) was born in Montana and grew up along the Rocky Mountain Front, the dramatic landscape that has inspired much of his writing. A recipient of a lifetime Distinguished Achievement Award from the Western Literature Association, he is the author of fifteen novels and four works of nonfiction.

When i visit the back corners of my life again after so long a time, littlest things jump out first. The oilcloth, tiny blue windmills on white squares, worn to colorless smears at our four places at the kitchen table. Our father’s pungent coffee, so strong it was almost ambulatory, which he gulped down from suppertime until bedtime and then slept serenely as a sphinx. The pesky wind, the one element we could count on at Marias Coulee, whistling into some weather­-­cracked cranny of this house as if invited ­in.

That night we were at our accustomed spots around the table, Toby coloring a battle between pirate ships as fast as his hand could go while I was at my schoolbook, and Damon, who should have been at his, absorbed in a secretive game of his own devising called domino solitaire. At the head of the table, the presiding sound was the occasional turning of a newspaper page. One has to imagine our father reading with his finger, down the column of rarely helpful want ads in the Westwater Gazette that had come in our week’s gunnysack of mail and provisions, in

his customary search for a colossal but underpriced team of workhorses, and that inquisitive finger now stubbing to a stop at one particular heading. To this day I can hear the signal of amusement that line of type drew out of him. Father had a short, sniffing way of laughing, as if anything funny had to prove it to his nose ­first.

I glanced up from my geography lesson to discover the newspaper making its way in my direction. Father’s thumb was crimped down onto the heading of the ad like the holder of a divining rod striking water. “Paul, better see this. Read it to the ­multitude.”

I did so, Damon and Toby halting what they were at to try to take in those five simple yet confounding ­words:

Meal­-­making was not a joking matter in our household. Father, though, continued to look pleased as could be and nodded for me to keep reading ­aloud.

Housekeeping position sought by widow. Sound morals, exceptional disposition. No culinary skills, but A­-­1 in all other household tasks. Salary negotiable, but must include railroad fare to Montana locality; first year of peerless care for your home thereby guaranteed. Respond to Boxholder, Box 19, Lowry Hill Postal Station, Minneapolis, ­Min­nesota.

Normal style="MARGIN: 0in 0in 0pt; tab-stops: 24.0pt"           Minneapolis was a thousand miles to the east, out of immediate reach even of the circumference of enthusiasm we could see growing in our father. But his response wasted no time in trying itself out on the three of us. “Boys? Boys, what would you think of our getting a ­housekeeper?”

“Would she do the milking?” asked Damon, ever the cagey ­one.

That slowed up Father only for a moment. Delineation of house chores and barn chores that might be construed as a logical extension of our domestic upkeep was exactly the sort of issue he liked to take on. “Astutely put, Damon. I see no reason why we can’t stipulate that churning the butter begins at the point of the ­cow.”

Already keyed up, Toby wanted to know, “Where she gonna ­sleep?”

Father was all too ready for this one. “George and Rae have their spare room going to waste now that the teacher doesn’t have to board with them.” His enthusiasm really was expanding in a hurry. Now our relatives, on the homestead next to ours, were in the market for a lodger, a lack as unbeknownst to them as our need for a housekeeper had been to us two minutes ­ago.

“Lowry Hill.” Father had turned back to the boldface little advertisement as if already in conversation with it. “If I’m not mistaken, that’s the cream of ­Minneapolis.”

I hated to point out the obvious, but that chore seemed to go with being the oldest son of Oliver ­Milliron.

“Father, we’re pretty much used to the house muss by now. It’s the cooking part you say you wouldn’t wish on your worst enemy.”

size: 10.0pt; mso-bidi-font-family: 'Times New Roman'"           Damon’s head swiveled, and then Toby’s, to see how he could possibly deal with this. For miles around, our household was regarded with something like a low fever of consternation by every woman worthy of her apron. As homestead life went, we were relatively prosperous and “bad off,” as it was termed, at the same time. Prosperity, such as it was, consisted of payments coming in from the sale of Father’s drayage business back in Manitowoc, Wisconsin. The “bad off” proportion of our situation was the year­-­old grave marker in the Marias Coulee cemetery. Its inscription, chiseled into all our hearts as well as the stone, read Florence Milliron, Beloved Wife and Mother (1874–1908). As much as each of the four of us missed her at other times, mealtimes were a kind of tribal low point where we contemplated whatever Father had managed to fight onto the table this time. “’Tovers, everyone’s old favorite!” he was apt to announce desperately as he set before us leftover hash on its way to becoming leftover ­stew.

Now he resorted to a lengthy slurp of his infamous coffee and came up with a response to me, if not exactly a ­reply:

“These want ads, you know, Paul—there’s always some give to them. It only takes a little bargaining. If I were a wagering man, I’d lay money Mrs. Minneapolis there isn’t as shy around a cookstove as she makes herself out to ­be.”

“But—” My index finger pinned down the five tablet­-­bold words of the ­heading.

“The woman was in a marriage,” Father patiently overrode the evidence of the newsprint, “so she had to have functioned in a ­kitchen.”

With thirteen­-­year­-­old sagacity, I pointed out: “Unless her husband starved ­out.”

“Hooey. Every woman can cook. Paul, get out your good pen and ­paper.”

PRAISE FOR THE WHISTLING SEASON

"Flawless . . . The Whistling Season is a book that strives for more than beauty, which it achieves: It reaches for joy."—O, THE OPRAH MAGAZINE

"Luminous . . . Doig has given us yet another memorable tale set in the historical West but contemporary in its themes and universal in its insights into the human heart."—THE SEATTLE TIMES 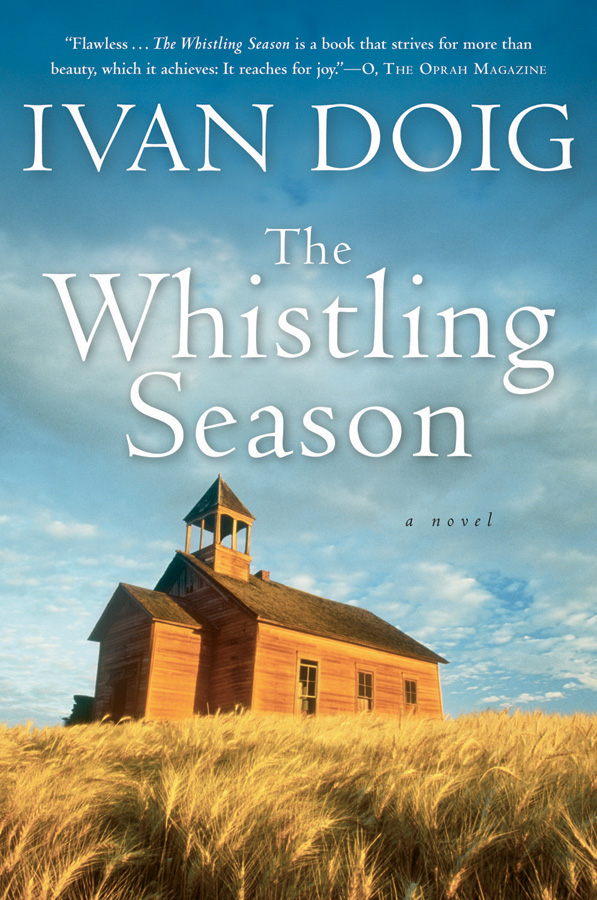