The Warrior's Heart: Becoming a Man of Compassion and Courage

Eric Greitens, the New York Times best-selling author of The Heart and the Fist, shares his adventures as a young man that led him to a life of service as both a humantarian and a Navy SEAL in this inspirational book for young adults.

In this adaptation of his best-selling book, The Heart and the Fist, Eric speaks directly to teens, interweaving memoir and intimate second-person narratives that ask readers to put themselves in the shoes of himself and others. Readers will share in Eric’s evolution from average kid to humanitarian to warrior, training and serving with the most elite military outfit in the world. Along the way, they’ll be asked to consider the power of choices, of making the decision each and every day to act with courage and compassion so that they grow to be tomorrow’s heroes.

About the author
Eric Greitens

ERIC GREITENS was born and raised in Missouri. After earning a Ph.D. as a Rhodes Scholar and serving as a humanitarian volunteer overseas, Eric joined the Navy SEALs. A boxing champion and a decorated combat veteran, he is the founder of the nonprofit The Mission Continues and the author of the New York Times bestseller The Heart and the Fist.

You stand in freezing water up to your chest. Every muscle in your body throbs with pain. You are exhausted beyond anything you could ever imagine, and all around you the night air carries the curses and groans of others who are gutting it out like you, who are trying to survive the night. Most won’t. You know the statistics: Maybe one in ten will make it through this week, will survive hours—days—of the punishment required to become a Navy SEAL. The water is dark around you, but you can make out lights on the beach. You remember your instructors’ words as the sun drifted toward the horizon, their voices booming over the bullhorns: "Say good night to the sun, gentlemen, say good night to the sun." "Tonight is going to be a very, very long night, gentlemen." "Tonight is going to be a very, very long night." You imagine another hundred hours of this. You see yourself plunging over and over into the icy water, pulling yourself out again. You imagine endless repetitions of sit-ups, fl utter kicks, pushups. Surf torture, they call it, when they leave you in freezing water. Not just for a few minutes but for fi ve more days. Fi ve days of struggle and uncertainty. Fi ve days of physical and emotional torment made to separate the iron-willed from the merely strong. In the distance, a bell sounds three times. And then another three times. As you hear the bell, you know that another student has chosen to quit. A voice rises and falls, taunting you, inviting you to do the same. "Quit now, and you can avoid the rush later. It just gets colder. It just gets harder." One by one, sometimes in clusters, other students surrender. All around you, they slog up out of the water, bodies shivering, clothes soaked. They climb up out of the ocean, walk up the sand hill. And they ring the bell. For them, it is the end. The others in your crew struggle along with you, and it’s their companionship and their strength that buoys you. You are there for one another. You are a team, and you do not want to quit on your team. But you are bone-tired and shivering. You’re afraid you’ll never make it through this night, let alone an entire week. On shore stands a brightly lit tent. Others are gathered inside, their palms cupping mugs of warm coffee. They are wrapped in blankets, eating hamburgers. They are safe. You could be one of them. All you have to do is rise out of the icy water and walk toward the tent. It’s easy. Students have been doing it al l night. Just get up. Get out. Walk toward that bell and quit. Then you could be warm and dry like the others. Then your stomach could be full, and you could feel your fi ngers and toes again. All you have to do is get up, get out. Ring the bell. What do you do?

Goose bumps rose as my fl ashlight brightened the words in front of me: Beware and Warning! This book is different from other books. You and YOU ALONE are in charge of what happens in this story. . . . You are a deep sea explorer searching for the famed lost city of Atlantis. This is your most challenging and dangerous mission. Fear and excitement are now your companions.At two in the morning, I was supposed to be asleep, not hidden beneath my blanket, reading until my eyes grew sore and I passed out with my face mashed against a book cover. But as a kid growing up in Missouri, I couldn’t get enough of these stories, the ones that put you right into the adventure, that pulled you into a vivid world and then asked you to decide which path to take. Should you investigate the mysterious underwater grotto, or stay in your submarine to analyze the odd bubbles rising from the canyon fl oor? Should you follow the call of the Himalayan Yeti, or return to the safety of base camp? Each choice scared and thrilled me. I gobbled the books whole, going back to redo any bad decisions that led to my untimely demise. Like many American kids, I grew up learning about a world populated by heroes. I read about Pericles, who built democracy in ancient Greece. I read about King Arthur and the medieval Knights of the Round Table, who fought sorcerers and giants and protected the weak. And I read about great American heroes: George Washington, who crossed a frozen Delaware River and led America through revolution to victory; Abraham Lincoln, whose words at Gettysburg laid the Civil War dead to rest and called a nation to its duty; Martin Luther King Jr., who announced to the world, "I have a dream," and inspired Americans to struggle for justice and dignity. I loved history, and I liked to imagine myself as part of it. But this rich view of the world also left me wondering where I fi t in. My big fear was that God and my parents had made a terrible mistake and that I’d been born in the wrong era, that the time for adventures had passed. I sat in the St. Louis public library and read stories of people discovering ancient cities and settling wild frontiers. I read about warriors, explorers, and activists, and then I’d stare out the window at a world that seemed very small and very safe. I was worried that all the corners of the earth had been explored, all the great battles fought. The famous people on TV were athletes and actresses and singers. What did they stand for? I wondered: Had the time for heroes passed? My other fear was that I’d miss my chance at a meaningful life. My mom was an early childhood special education teacher, and my dad was an accountant. They’d told me—perhaps since kindergarten—that I should work hard so I could go to a place called college. College, they promised, was "the ticket." I imagined the ticket as something golden and shiny, like a ticket for a train that would hurtle me to a place fi lled with adventures. As I understood it, they gave out tickets after high school, but if you wanted one, you had to have good grades. So in third grade, when I came home with a report card that read: "Eric Greitens, Handwriting: B−," I naturally asked my mom, "Will they still let me go to college?" She laughed and hugged me. My parents wanted me to treat others with kindness. They wanted me to be respectful. They wanted me to try hard and to be a team player. But while they cared about these "character" things, they didn’t seem so concerned with whether or not I got great grades. Especially at eight years old. When my third grade science fair experiment—involving tulips, soda, and my dad’s beer—ended in catastrophe, I asked again, "Will they still let me go to college?" When at ten years old, I lit a pile of leaves on fi re to keep myself warm while waiting for the school bus and managed to accidentally set a whole sewer full of dry leaves on fi re, I asked: "Will they still let me go to college?" It was in college, everyone told me over and over, that I could pursue big dreams. College was the fi rst step into the "real world," where every great purpose could be pursued. In college, my adventures would really begin.

My parents weren’t rich, which meant I’d have to fi nd a way to pay for college myself. As a kid, I didn’t think about scholarships or loans; I thought about earning money. My dad had set up a savings account for me at the local credit union, and he’d show me the bank statement every month so I could see the bits of interest adding to my account. At any rate, I knew I’d have to start earning ...
Reviews

"An uncommon (to say the least) coming of age, retraced with well-deserved pride but not self-aggrandizement, and as thought provoking as it is entertaining."--Kirkus, starred review "Adapted from the adult title The Heart and the Fist (Houghton, 2011), this volume has been rearranged, shortened, and streamlined in way sure to appeal to its new audience."--School Library Journal

“Greitens describes his adventurous life in a manner that many teen boys will find inspirational."-- VOYA

"[An] engaging and important book."--LA Times 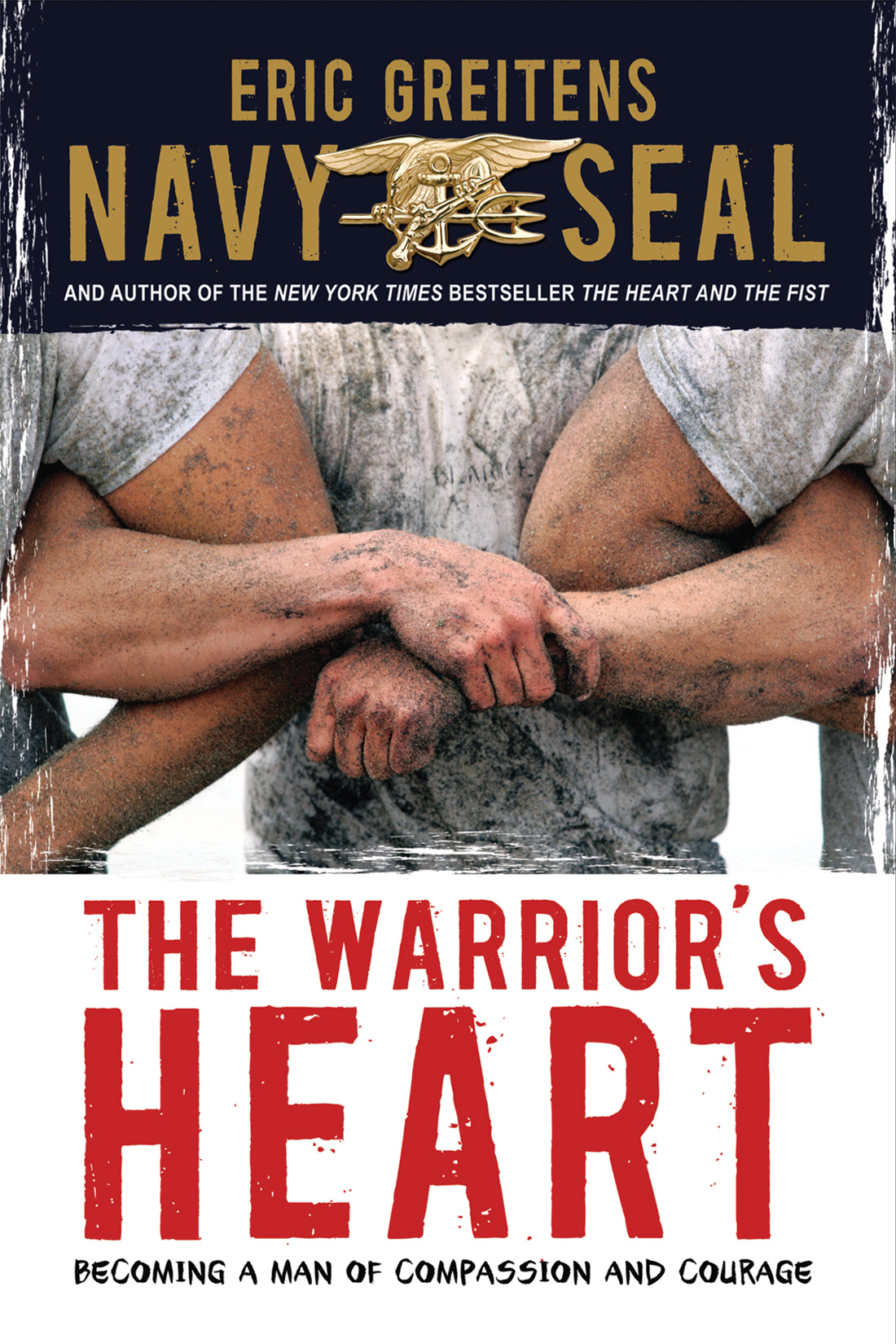