Identical twins Tom and Eddie, living on different planets, regroup with friends to develop the special powers that will help them resist alien and government attempts to destroy both Earths.

“A multi-world adventure starring a band of heroes that readers will want to join.” —Kirkus Reviews, of The Twinning Project

In this stand-alone sequel to The Twinning Project, thirteen-year-old twins Tom and Eddie, aware that their homes are at risk, have been waiting for a chance to save their planets. The sudden appearance of an alien both in Tom’s school lunchroom and on Eddie’s baseball field tells them that now is the time. The stakes are high, and sinister U.S. government agents want their piece of the pie. Can Tom and Eddie persuade the alien council to preserve their worlds, or will both troubled planets just go up in smoke? Middle grade space adventure? Check. Aliens who quote Mark Twain? Check. Suspense? Check. Blast off!

About the author
Robert Lipsyte

Robert Lipsyte was an award-winning sportswriter for the New York Times and the Emmy-winning host of the nightly public affairs show The Eleventh Hour. He is the author of over a dozen acclaimed novels for young adults and is the recipient of the Margaret A. Edwards Award honoring his lifetime contribution in that genre. He has also written numerous works of fiction and nonfiction for adults. He lives in Manhattan and on Shelter Island, New York, with his wife, Lois Morris, and his dog, Milo. Visit his website at www.robertlipsyte.com.

The aliens came back in the spring, just when I was beginning to think I’d never see Dad or my identical twin brother, Eddie, again. For years I had thought Eddie was imaginary, a voice in my head. When he came to Earth, a real live brother, it was one of the best days of my life. I thought we’d find Dad together and crack the mystery of just who we were.

It had been six months since we’d watched Dad disappear into the belly of the aliens’ spaceship. I hadn’t talked to Eddie in weeks. What was there to talk about? We were stuck on different planets—him on EarthTwo in 1958 and me on EarthOne in 2012—and nothing much had been happening on either one.

The day it all started again, I was ghosting through my morning classes, feeling down. Even Mrs. Rupp, the dumb history teacher with her boring timeline, couldn’t get my juices going. She was on a topic that should have been interesting—nuclear energy—but Mrs. Rupp made us waste our time memorizing dates instead of learning stories that could explain why things happened. Usually I interrupt her because I’m bad, a troublemaker who likes to shake things up. I can’t stand bullies or know-it-alls, even if they’re teachers. But that day I kept my mouth shut. That’s how down I felt. My best friends, Alessa and Britzky, thought I was sick.

At lunch, I hesitated before sitting at our regular table in the far corner of the cafeteria by the garbage cans, what I called the rebel table, because we dared to be different. I didn’t want to be around Alessa and Britzky. They reminded me of everything I had hoped would happen but hadn’t yet—my dream that the three of us, along with Eddie and his sidekick, Ronnie, plus Dad and Grandpa would set off again on our mission to save the Earths. If the Earths didn’t destroy themselves by nuclear explosions or extreme weather, then the aliens would wipe us out because they were sure that the Earths would destabilize the entire universe and destroy them!

What made it even more complicated was that Dad and Grandpa were aliens themselves and Eddie and I were half alien, maybe the world’s only halfies.

Could be time to get thrown out of school again, I thought. I could start my fourth middle school! I wondered if that would be a Guinness World Record.

When I did sit down, Britzky poked me and said, “Check out this dude.”

The chatter and clatter of the cafeteria had faded away. Teachers had stopped talking on their phones. The kids at the jock, fashion, drama, digital, social, thug, and toasted tables were silent.

The only sound was the clop of boots as a short, skinny kid in a long black raincoat that flapped against his black jeans marched slowly toward us.

There was no expression on his pale face. He reminded me of someone. Who? I thought he was looking directly at me but I couldn’t be sure because of the old-fashioned aviator shades he was wearing.

I whispered to Alessa and Britzky, “I thought you’re not allowed to wear dark glasses in school.”

“He’s new,” said Alessa, who worked in the school secretary’s office. “His records are sealed.”

“That means he just got out of juvie,” said Britzky, his usually loud voice soft. “Or he’s a government informer.”

I thought of a third possibility. I wondered if they were thinking it, too.

Alessa said, “His name is Hercules.”

Britzky whispered, “That could mean something. In the book A Connecticut Yankee in King Arthur’s Court, the guy who hits the hero over the head is nicknamed Hercules. And you know how the aliens love books by Mark Twain.”

Hercules kept coming toward us. I wondered what he was covering up under his raincoat. Seventh-graders didn’t carry automatic weapons into school. Not yet, anyway.

As usual, I was ready to rumble. That’s the way I am. I felt for my Extreme-Temperature Narrow-Beam Climate Simulators. I had never used them in combat. They were two Sharpie-size nano composite rods. Scientists had invented them as part of the battle against global warming, but the army was interested in using them as weapons. So was I. I’d hacked the data and built them myself. They were my new favorite personal weapons. The data claimed either rod could stop a water buffalo. Together they could stop a herd. This might be a chance to see what the rods could do.

Hercules halted a few feet from the table. His voice was familiar. “Which one of you freaks is Tom Canty?”

Britzky jumped up and got between us. “What do you want with Tom?” He was in his old bodyguard mode. “You’ll have to deal with me first.”

“Ah, the paranoid loudmouth Britzky,” said Hercules. How did he know about Britzky? “As Mark Twain said, ‘It’s better to keep your mouth shut and be thought a fool than to open it and remove all doubt.’”

The pimples on Britzky’s forehead went neon, the way they always do when he’s mad. He lowered his head but kept his eyes on Hercules and charged.

Hercules lifted his shades and stared at him with bright green eyes. We had seen such eyes before. They were alien eyes. Britzky froze, then turned around and walked back to his seat.

Hercules lowered his shades and turned to me. “So you must be the famous Tom Canty.”

The YouTube clip had gotten me kicked out of my second middle school. I had put a bully on his butt in the cafeteria with a blast from my TPT GreaseShot, my favorite weapon the year before. Someone had recorded the action with an iPhone and it was all over the Internet in seconds.

“Are you the Tom Canty who people mistakenly think founded Tech Off! Day?”

Mistakenly? How could he know that? It was my twin, Eddie, who’d come up with Tech Off! Day, in which everybody was supposed to switch off all electronic devices for one day and get to know other people face-to-face. This had been last fall, when Eddie was on my planet pretending to be me and I was on his planet pretending to be him. Being Eddie wasn’t easy for me. He’s a nice guy.

But only the seven of us—me, Eddie, Alessa, Britzky, Ronnie, Grandpa, and Dad—plus the aliens—knew about the switch. Why had the aliens sent down this creepy guy? His glittery green eyes probably meant he was an alien, too.

“What do you want, Hercules?” I showed him some attitude. All around the cafeteria, kids were pointing their phones and tablets at us.

"Chock-full of action and suspense, this series will get readers thinking about important social and environmental issues."

"Fast-paced action and high octane suspense should definitely appeal to reluctant as well as not-so-reluctant teen readers, both boys and girls." 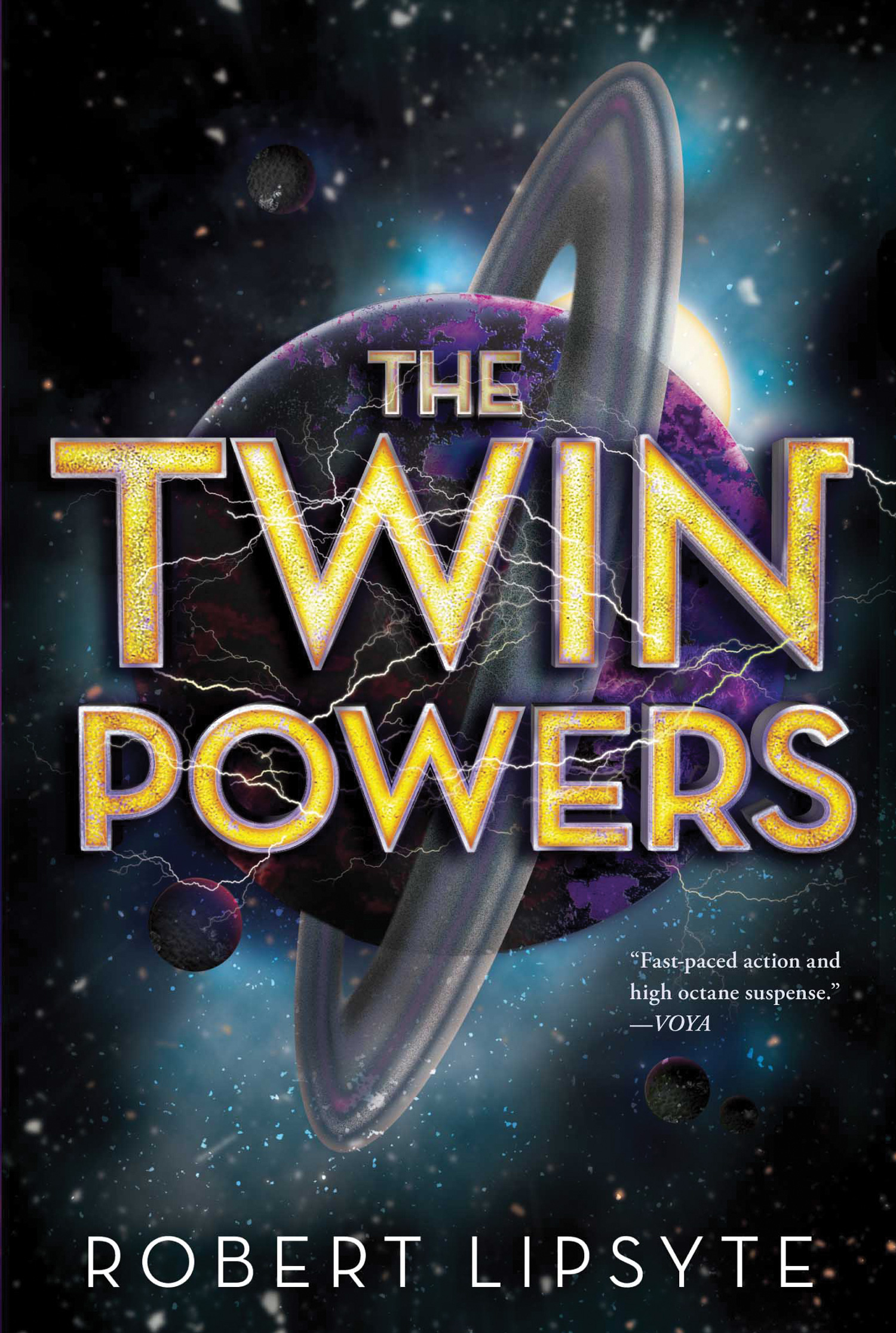