In the exciting final installment of the Lost Voices trilogy, mermaid Luce swims to the San Francisco Bay where she finds a group of renegade mermaids who unite become an army under her leadership when war breaks out between humans and mermaids.

Mermaids have been sinking ships and drowning humans for centuries, and now the government is determined to put an end to the mermaid problem—by slaughtering all of them. Luce, a mermaid with exceptionally threatening abilities, becomes their number-one target, hunted as she flees down the coast toward San Francisco.

There she finds hundreds of mermaids living in exile under the docks of the bay. These are the Twice Lost: once-human girls lost first when a trauma turned them into mermaids, and lost a second time when they broke mermaid law and were rejected by their tribes. Luce is stunned when they elect her as their leader. But she won’t be their queen. She’ll be their general. And they will become the Twice Lost Army—because this is war.

About the author
Sarah Porter

Sarah Porter is the author of the young adult novels Lost Voices, Waking Storms, The Twice Lost, and Vassa in the Night. She is also an artist and a freelance public school teacher. Sarah and her husband live in Brooklyn, New York. Visit her online at www.sarahporterbooks.com.

Chapter One: The Tank

“Hello,” the young man in the lab coat purred into a round speaker, his hands fidgeting. Ripples of azure light reflected on his cheeks. “Are you awake?” There was no response. He stood with a few other stiff-backed men, among them the nation’s secretary of defense, in a room divided in half by a wall of thick—and perfectly soundproof—glass. Behind the glass was something that resembled the kind of fake habitat found in a zoo, like an enclosure for keeping penguins or seals. Bubbling salt water filled most of the tank to a depth of about five feet, but on the right there was an artificial shore of baby blue cement sloping down into the water. That was where the resemblance to a zoo display ended, though. A giant flat-screen television blazed high on the wall above the tank’s deep end, playing what appeared to be a reality show about rich teenagers. Flouncy pink satin cushions were heaped along the shore just above the waterline, and a large white dresser decorated with golden scrolls perched on a ledge at the back. Various electronic gadgets were scattered on the cement, but beyond the clutter the tank gave no sign of being inhabited. “You have a very important visitor today, so . . .  your full cooperation . . .”

The crowd behind him shifted impatiently, and the young man flinched as if he could feel their disapproval pricking his skin. “Getting on with it! I’m going to be turning on your microphone so you can talk to these men. But I have to warn you . . .” Far back in the tank something sky blue and pearlescent flicked up for a moment from behind a pile of cushions. For a second the young man’s voice grated to a halt, and he stared urgently before he mastered himself enough to keep going. “We’ve programmed the computer to recognize any hint of singing. If you try anything, it will send out an electric shock automatically. A pretty severe one. All right? I’d like you to be on . . .” There was that blue flash again, and a trace of rippling gold. “On . . . your best behavior, please.” He turned to look at the secretary of defense and offered a tight, ingratiating smile. Then he flicked a switch in a small control panel set into the glass beside the speaker. “Please meet the United States secretary of defense. Secretary Moreland?”

Moreland leaned toward the glass, an odd smirk rippling over his heavy reddish face with its sagging jowls. His white hair shone like meringue above his gleaming pate. “Anais,” he snapped, then waited, scowling, for a reply. It didn’t come. “I’d suggest you get your damned tail over here. You’re our little mermaid now.”

The sky blue tail rose above the water again, twitching irritably. Pinkish iridescence shone on its scales, and the cushions stirred as a golden head shifted up into view. Dreamy azure eyes turned to gaze through the glass. Several of the men stepped forward as if involuntarily, and others visibly braced themselves. She shook herself, and her inhuman beauty came at them like a living wave. Moreland’s smirk tightened, and his upper lip jerked sharply higher to expose his perfect teeth. “Hello there.”

“Hi.” She examined Moreland’s crisp, expensive suit with a trace of approval. “Are you really important?”

It was hard to tell if Moreland was leering or snarling in response. “Oh, I’d say so.”

“Then I only want to talk to you.” She scanned the other men disdainfully. “Having all these people staring at me makes me feel so shy!”

She didn’t look shy, but Moreland smiled almost indulgently. He made a quick motion to the young man in the lab coat, who hurried to tap at the control panel, cutting off Anais’s sound. “Do you mind, gentlemen?” Moreland asked.

“We can observe through the monitors in the next room?” the lab-coated man asked anxiously. “She is—I mean—I am her primary handler, and I should know—”

“Oh, I don’t think so.” Moreland’s lip hiked up again. “I don’t think you should observe. I’d like to allow her”—he cocked his head toward the tank, where Anais, piqued at not being able to hear what they were saying, was now swimming toward the glass—“a chance to confide in me. Privately.”

“But—of course you’re aware, Mr. Secretary, that she’s suffered some very serious trauma. Those mermaids she was living with all . . .”

“A fragile flower,” Moreland agreed, grinning horribly. “I’ll use my most delicate touch.”

The young lab-coated man didn’t look particularly reassured, but he still nodded. “The blue switch controls sound going into her side. The red cuts her off over here. Given the precautions we’ve taken, though—”

“Thank you, Mr. Hackett. I’ll let you know when I need your assistance.”

Anais was tapping, though inaudibly, on her side of the glass. She was supporting herself in the deepest water with a slight circulating motion of her fins so that her face and shoulders floated just above the surface. Her golden hair rippled and shone around her, and she looked sulky and eager. Hackett gave her a coy little smile and a wave as he turned to leave. “Even without any singing,” one of the men observed as they walked to the door, “she’s still remarkably . . .

“Remarkably?” one of his companions asked archly, eyebrows raised.

“Compelling, I would say.”

“I’d use a different term, frankly.”

Secretary Moreland didn’t watch them go. Instead he was staring fixedly into Anais’s blue eyes, though the look on his face didn’t exactly suggest attraction. It was somewhere between caressing and murderous, and a smirk kept tweaking his lips. Once everyone was gone he reached to flip the sound back on, still keeping his gaze locked on Anais’s face. “Better now, tadpole?”

Anais pouted. Her lips were slick with strawberry pink gloss. “You have a problem.”

“I’d say there are some other—you really can’t call them people—some other nasty animals who have much bigger problems these days, tadpole. You should be very, very thankful that we’re taking such good care of you. When you could be in the same mess as your little killing-machine friends . . .”

Anais shrugged impatiently, sending a quick surge through the water around her. Her golden hair lapped at her shoulders. She was wearing a sparkly, sky blue tank top that matched her tail almost perfectly, and diamond studs sparked in her ears. “I don’t care about that! Charlie told me about that boat of yours that got trashed.”

“Mr. Hackett. He said there was a big wave that came out of nowhere and, like, totaled the boat with your guys on it after . . .” Anais suddenly seemed a bit uncomfortable. “After . . . I surrendered. I knew you’d want to talk to one of us, if we just acted nicer. And—”

“That wave didn’t come out of nowhere, I think, tadpole. You shouldn’t assume that Mr. Hackett’s information is entirely reliable.”

“That’s what I’m trying to tell you!” Anais was getting exasperated. “I just didn’t want to tell . . . Mr. Hackett because I didn’t think he could really...

PRAISE FOR THE TWICE LOST

"Sara Porter creates a world where the happy-go-lucky mermaid stories mean nothing. . . . [Her] eye-opening take on undersea folklore is enough in itself to make this trilogy the piece of art that it is. Throw in nail-biting suspense, magically-written characters and plot twists that no one sees coming, and you are left with a series that pulls you under its spell and breaks your heart. . . and you’ll devour every minute of it."—teenreads.com

"The Twice Lost offers a moving, action-packed and deeply satisfying ending to Sarah Porter's brilliant Lost Voices trilogy. What a beautiful, intense world of ferocious lost girls who find themselves at last. I loved it." —Carolyn Turgeon, author of Mermaid and The Fairest of Them All

"A beautifully written and heartbreaking story about a lost soul struggling to forgive the people she loved who wronged her, and ultimately to forgive herself." —Jennifer Echols, author of Going Too Far

"Sarah Porter’s mermaid world is dazzlingly imagined and richly, hauntingly told. Waking Storms is as enchanting—and dark, and lush, and tragic, and gorgeous—as the mermaids' song." —Carolyn Turgeon, author of Mermaid and The Fairest of Them All

"Porter has crafted another winner. . . . Like any good middle novel in a trilogy, Waking Storms leaves plenty of strings untied to keep you hungry for the final installment. But unlike many weaker series, this book also stands up completely on its own two feet (fins?) and is as deep, dark and magical as Lost Voices. A reader could pick it up not having read the previous title and be fine, while fans of the first novel surely will not be disappointed." —teenreads.com 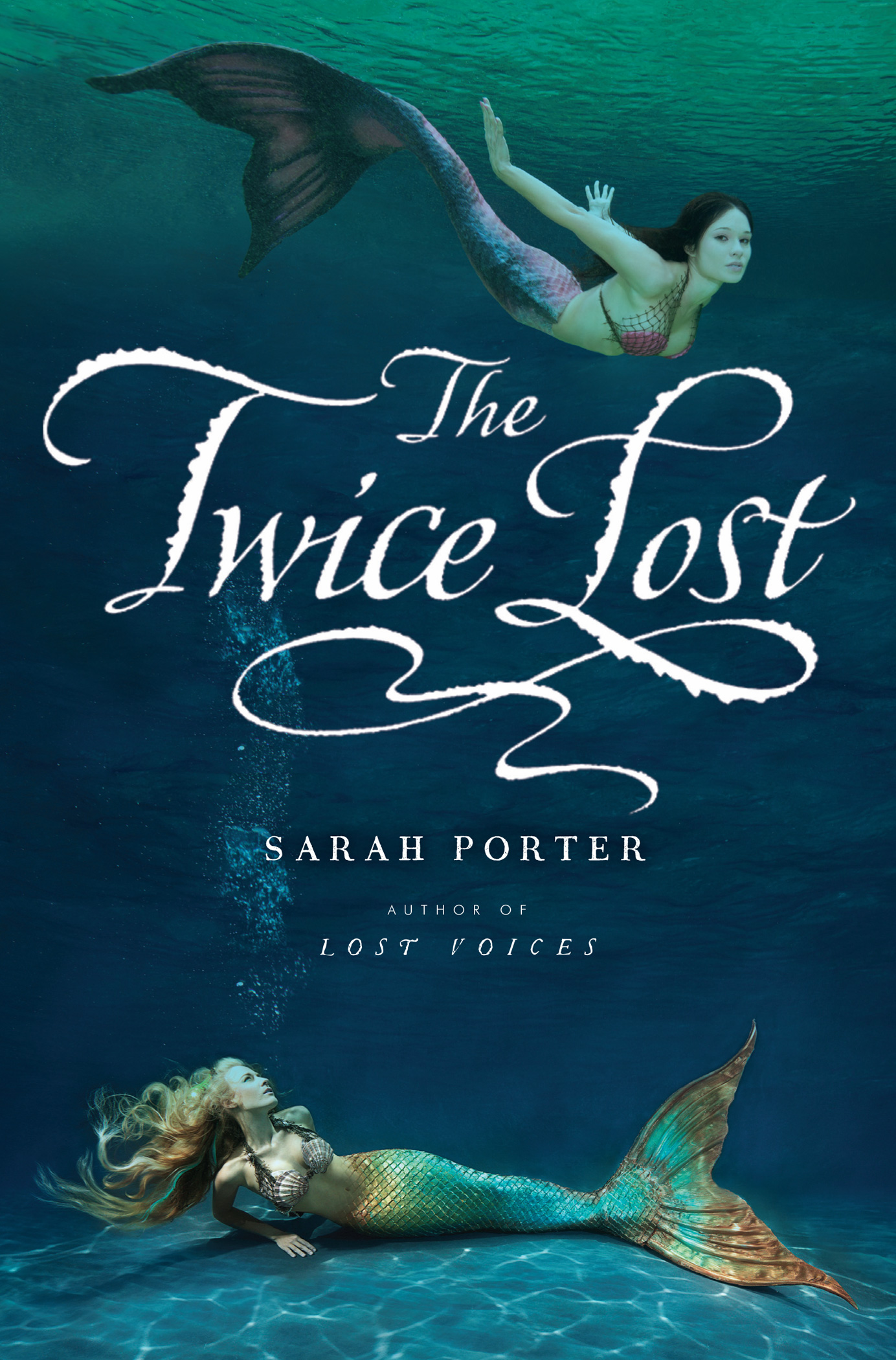