About the book
It's the summer of 1963, and something strange is afoot in the quiet town of Farro, Iowa. The school district's most notorious bully has gone missing without a trace, and furthermore, seventh grader Henry Nilsson and his friends have just found an odd book stashed in the woods by Longbelly Gulch---a moldy instruction guide written to teach the art of "subtle travel," a kind of out-of-body experience. The foursome will soon discover that out-of-body life isn't so subtle after all---there are some very real, and very dangerous, things happening out there in the woods. The science fiction inventiveness of Madeleine L'Engle meets the social commentary of Gary Schmidt in this thrilling tale of missing persons, first crushes, embarrassing pajamas, and thought-provoking dilemmas.
About the author
Steven Arntson

Steven Arntson is the author of the middle grade novel The Wikkeling. He’s a writer and musician who lives in Seattle, Washington. Visit his website at www.stevenarntson.com.

The last day of summer break before the start of my seventh grade year was the first time I ever got punched in the face.

It was August 1963 and a hot, humid summer afternoon outside of Farro, Iowa. I don’t know if you’ve been to southeast Iowa, but in summertime going outside here can be like walking into a lung. I once saw a guy in a grocery store parking lot faint into his own shopping cart.

“Why are we spending the last day of vacation trying to help Carl?” I complained, wiping sweat from my brow as we four (me and my sister Helen with our best friends Alan and Nicki) pedaled along an easy slope. “He beat up Ernest last week.” Ernest wasn’t a personal friend of mine, but he was a good example of someone Carl Dunn had recently clobbered. Every kid around Farro was anxious about Carl, and not in the sense of worrying about his welfare. He was the worst bully in Johnson County, and he’d gotten twice as bad this summer, almost like he was taking lessons. I was terrified of him, and plenty nervous about scouting around for his secret hideout. But I was willing to, all the same, mainly because Carl was Alan’s older brother, and Alan was my best friend.

Alan and Carl were mostly opposites. Carl was tall and Alan was short. Carl was dumb; Alan was smart. Carl was a bully who ruled the whole town of Farro with threats and violence. Alan was a nice kid, friends with almost everyone. The only things the two of them shared were their dark summer tans and high batting averages—the first because they were both part Nez Perce Indian, and the second because they both took after their dad when it came to baseball. Myself, I was terrible at baseball. Also I never tanned, only burned.

There was one other reason I was out here today—Helen’s best friend Nicki pedaling beside me as we turned onto North Half, a dirt lane that edged the lip of Longbelly Gulch.

Nicki’s bike was blue, with red tassels on her handlebar grips. Her tires were the kind with white sidewalls, streaked with dirt from a busy summer. I studied her bike because I was too nervous to study her. She was right there, wearing sandals, muscly smooth brown legs, red shirt, shiny black hair, button nose, but I couldn’t take more than a sidewise glance, because I would’ve crashed.

I had a crush on her. I’m not sure when it started, and at this point maybe it didn’t matter. It took a lot of energy for me to act normal around her, so I focused on that.

When Nicki put on a burst of speed, I followed. We came neck and neck with Helen and left Alan trailing. Alan’s bike was in sad shape. He’d inherited it from Carl years ago. There were broken spokes front and back, and the rear axle didn’t have any lug nuts so sometimes the wheel fell off. It was less of a bike and more of a bike accident.

Helen and I rode brown ten-speeds, identical except mine was boy’s style with the straight top bar and hers was girl’s style with the angled top bar so she could ride while wearing a dress. (Not that she was wearing a dress. She never wore one during summer vacation.) Identical bikes are one of those things that happen when you’re twins, even girl and boy twins. Two of everything. Twins are always plural, like pants or scissors. Nobody thinks of a single pant, or just one scissor.

Our bikes were a little small. We were supposed to get new ones this year for our birthday, but Mom and Dad couldn’t afford them. Dad’s job at the rail yard was giving him fewer hours, and we were having to “tighten our belts,” Dad said. Keeping two old bikes was the equivalent of two notches on the family financial belt, I believe.

Helen’s bike had a racing stripe and flames painted on, which she’d done when she got it, angry about it being girl’s style. She said I should have gotten the girl’s-style bike, and maybe she was right, since she liked to go off jumps and I didn’t. Helen was also always quick to point out that she was twenty minutes older than me. In general, she was the boss of us. For instance, when this plan of seeking out Carl’s hidden campsite was first presented by Alan, I’d said, “We should think about this first,” which is what I usually say. Then Helen had grabbed my ear and dragged me outside—her usual reply.

North Half reeked of oil because around here they oil dirt roads in the summer to keep the dust down. I’m not sure which is worse, the stench of the oil or the dust, but I guess the people who spread the oil must hate the dust.

We juddered over the potholes and Alan’s wheel fell off, but he caught himself and replaced it so quickly I don’t think he ever came to a full stop. The juddering made me feel more nervous. I’d meant it when I’d said I wanted to think this through, and I would have felt a lot better if we’d taken a few moments at the kitchen table to brainstorm a quick pros and cons list. Writing things out always helps me. But for Helen it seemed like the opposite. Writing things down, for her, was like standing around after hearing the starting gun.

North Half was widely known by kids around here, an abandoned track along the gulch’s edge. It went, ultimately, nowhere. I mean, it probably had a purpose once, but that once and that purpose were ages gone.

Eventually, the road became too rough to ride. We stashed our bikes in the brush and continued on foot.

“Past the gulch, I think. In the forest,” said Alan.

I walked next to Nicki. Out of the corner of my eye I studied her sandals, which showcased her two perfect sets of toes.

“Whew!” I said, conversationally. In avoiding a direct gaze, I caught other glimpses—a knee shining with sweat, her upper arm, her black hair stark against her graceful brown neck. She seemed to glow when she sweated. When I sweated I felt like a baked potato.

Helen was way ahead of us in her eagerness to get into trouble.

To our left, Longbelly Gulch opened up, and to our right, Longbelly Prairie, a wide bowl on the shaded north-facing slope. Although it was afternoon, a thin mist hovered over the grasses out there. I saw some cardinals and bluebirds, and heard a woodpecker whacking a trunk.

You might think Iowa is just a big corn farm full of tractors, but in southeast Iowa there are beautiful gulches and hillsides of prairie. Longbelly Gulch was so called because it looked like a big long belly pressed into the hillside. At the bottom ran Longbelly Creek.

Once we passed the field and entered the maple forest, we came to a berm at the edge of the road, covered in clumpy seeding grass that was beaten into a trail. I looked at Helen to see what she made of it, since she was our lead adventurer.

My sister is about my height, and I guess she and I look similar. People say so. We’re blond and skinny and we tend to dress the same, especially during the summer. That said, I often feel like she’s better than ...

"The four friends encounter adventure and danger as they hunt for Carl, meet other astral travelers, and dodge the National Flux Travel Security Association...At times the book waxes philosophical, examining the nature of the body, consciousness, death, and humanity."

* "This riveting science-fiction mystery is much more than an exciting read...An amazing blend of mystery, romance, science fiction and social commentary."

"The story deals with issues of friendship, mystery, and school crushes [and] should appeal to fans of science fiction and fantasy."

* "Henry's introspective, self-effacing narration brims with evocative details and descriptions...unspooling a haunting and suspenseful story that will resonate with science-fiction fans as well as anyone who has needed to find the courage to ask a date to the big dance."

"Aptly named, The Trap is a deceptively breezy, fast-paced mystery with an engaging kid narrator. Arntson weaves classic sci-fi elements into a fresh, fantastical story ideal for middle grades on up."

"This novel is a strong choice for readers new to science fiction who appreciate the power of storytelling to change the world." 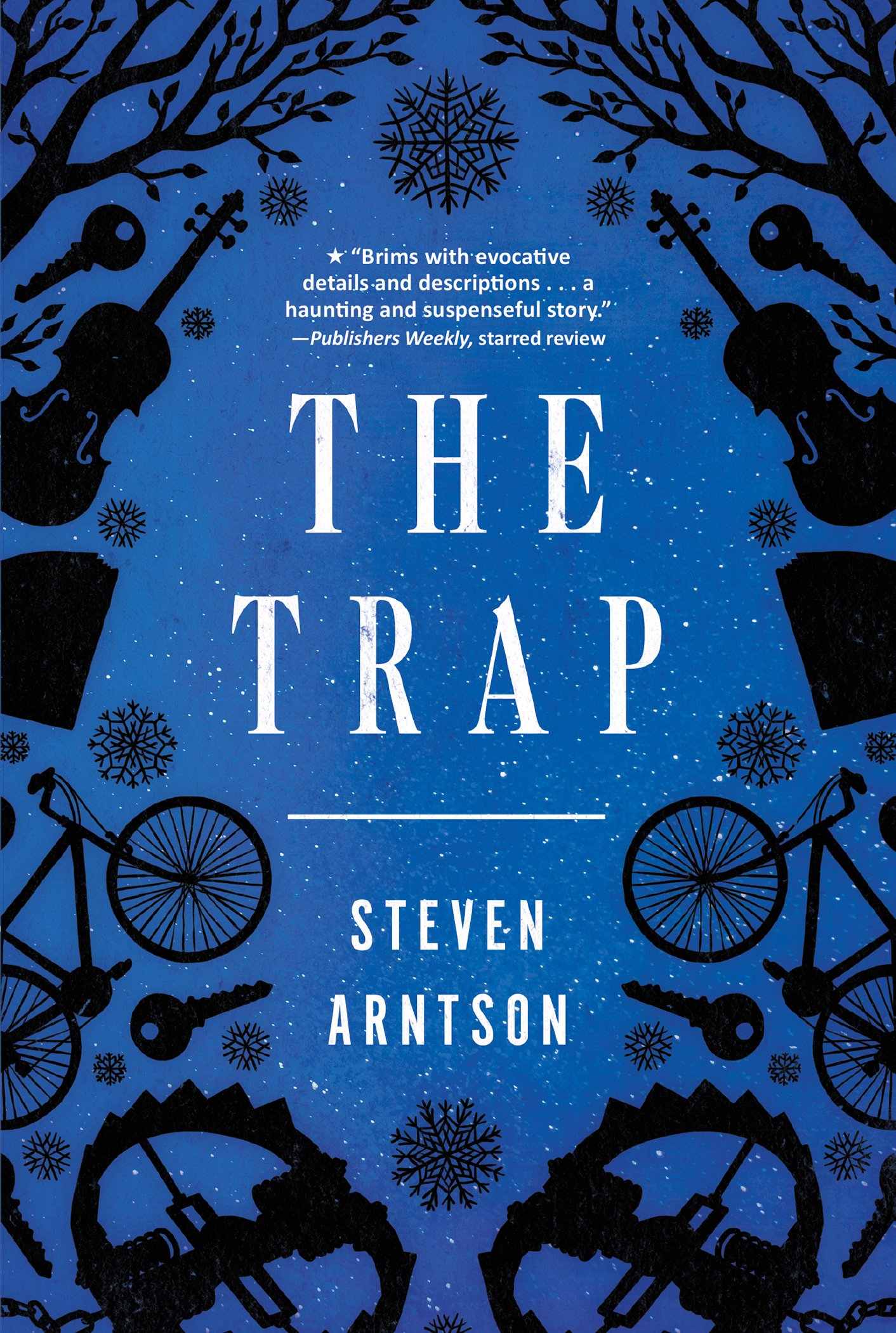