One of the greatest modern novels, THE TIN DRUM is the story of thirty-year-old Oskar Matzerath, who has lived through the long Nazi nightmare and who, as the novel begins, is being held in a mental institution. Matzerath provides a profound yet hilarious perspective on both German history and the human condition in the modern world.

The Tin Drum, one of the great novels of the twentieth century, was published in Ralph Manheim's outstanding translation in 1959. It became a runaway bestseller and catapulted its young author to the forefront of world literature.

To mark the fiftieth anniversary of the original publication, Houghton Mifflin Harcourt, along with Grass’s publishers all over the world, is bringing out a new translation of this classic novel. Breon Mitchell, acclaimed translator and scholar, has drawn from many sources: from a wealth of detailed scholarship; from a wide range of newly-available reference works; and from the author himself. The result is a translation that is more faithful to Grass’s style and rhythm, restores omissions, and reflects more fully the complexity of the original work.

After fifty years, THE TIN DRUM has, if anything, gained in power and relevance. All of Grass’s amazing evocations are still there, and still amazing: Oskar Matzerath, the indomitable drummer; his grandmother, Anna Koljaiczek; his mother, Agnes; Alfred Matzerath and Jan Bronski, his presumptive fathers; Oskar’s midget friends—Bebra, the great circus master and Roswitha Raguna, the famous somnambulist; Sister Scholastica and Sister Agatha, the Right Reverend Father Wiehnke; the Greffs, the Schefflers, Herr Fajngold, all Kashubians, Poles, Germans, and Jews—waiting to be discovered and re-discovered.

About the author
G&uuml;nter Grass

GÜNTER GRASS (1927–2015), Germany's most celebrated contemporary writer, attained worldwide renown with the publication of his novel The Tin Drum in 1959. A man of remarkable versatility, Grass was a poet, playwright, social critic, graphic artist, and novelist. He was awarded the Nobel Prize for literature in 1999.

BREON MITCHELL is Professor of Germanic Studies and Comparative Literature at Indiana University, where he is also Director of the Lilly Library. A Rhodes Scholar, he received his Ph.D. in Comparative Literature from Oxford University. His areas of specialization include literary translation, Anglo-German literary relations, literature and the visual arts, James Joyce, Franz Kafka, and Samuel Beckett.

GRANTED: I’M AN INMATE in a mental institution; my keeper watches me, scarcely lets me out of sight, for there’s a peephole in the door, and my keeper’s eye is the shade of brown that can’t see through blue-eyed types like me.

So my keeper can’t possibly be my enemy. I’ve grown fond of this man peeping through the door, and the moment he enters my room I tell him incidents from my life so he can get to know me in spite of the peephole between us. The good fellow seems to appreciate my stories, for the moment I’ve finished some tall tale he expresses his gratitude by showing me one of his latest knotworks. Whether he’s an artist remains to be seen. But an exhibition of his works would be well received by the press, and would entice a few buyers too. He gathers ordinary pieces of string from his patients’ rooms after visiting hours, disentangles them, knots them into multilayered, cartilaginous specters, dips them in plaster, lets them harden, and impales them on knitting needles mounted on little wooden pedestals.

He often plays with the notion of coloring his creations. I advise him not to, point toward my white metal bed and ask him to imagine this most perfect of all beds painted in multiple hues. Horrified, he claps his keeper’s hands to his head, struggles to arrange his somewhat inflexible features into an expression of manifold shock, and drops his polychrome plans.

My white-enameled metal hospital bed thus sets a standard. To me it is more; my bed is a goal I’ve finally reached, it is my consolation, and could easily become my faith if the administration would allow me to make a few changes: I’d like to have the bed rails raised even higher to keep anyone from coming too close.

Once a week Visitors Day disrupts the silence I’ve woven between my white metal bars. It signals the arrival of those who wish to save me, who find pleasure in loving me, who seek to value, respect, and know themselves through me. How blind, nervous, and ill-mannered they are. Scratching away at my white bed rails with their nail scissors, scribbling obscene, elongated stick figures on the enamel with ballpoint pens and blue pencils. My lawyer, having blasted the room with his hello, routinely claps his nylon hat over the left-hand bedpost at the foot of my bed. This act of violence robs me of my inner balance and good cheer for as long as his visit lasts—and lawyers always have plenty to say.

Once my visitors have placed their gifts on the little white oilcloth-covered table that stands beneath a watercolor of anemones, once they’ve laid out some future plan to save me, or one already under way, once they’ve managed to convince me, by their tireless attempts to rescue me, of the high quality of their brotherly love, they find renewed joy in their own existence and depart. Then my keeper arrives to air out the room and gather up the string from the gift wrappings. Often after airing he finds time, sitting by my bed and disentangling the string, to spread a silence so prolonged that in the end I call the silence Bruno, and Bruno silence.

Bruno Münsterberg—I’m talking about my keeper now, I’m done playing with words—bought five hundred sheets of writing paper on my behalf. Should this supply prove insufficient, Bruno, who is unmarried, childless, and hails from the Sauerland, will revisit the little stationery shop, which also sells toys, and provide me with whatever additional unlined space I need for my recollections, which I hope will be accurate. I could never have requested this favor of my visitors, my lawyer, or Klepp, say. The solicitous love prescribed for me would surely have prevented my friends from anything so dangerous as bringing me blank paper and allowing my incessantly syllable-excreting mind free use of it.

When I said to Bruno, “Oh, Bruno, would you buy me a ream of virgin paper?” he looked up at the ceiling, sent his finger pointing in that same direction to underline the comparison, and replied, “You mean white paper, Herr Oskar.”

I stuck with the word virgin and told Bruno to ask for it that way at the shop. When he returned later that afternoon with the package, he seemed a Bruno lost in thought. He stared long and hard a few times at the ceiling, that source of all his bright ideas, and then announced, “That word you recommended was right. I asked for virgin paper and the salesgirl blushed bright red before she gave me what I wanted.”

Fearing a long conversation about salesgirls in stationery shops, I regretted having emphasized the paper’s innocence by calling it virgin, and said nothing, waited till Bruno had left the room. Only then did I open the package with the five hundred sheets of paper.

I lifted the resilient stack for a moment and tested its weight. Then I counted off ten sheets and stored the rest in my bedside table. I found the fountain pen by my photo album in the drawer: it’s full, it won’t fail for lack of ink; how shall I begin?

You can start a story in the middle, then strike out boldly backward and forward to create confusion. You can be modern, delete all reference to time and distance, and then proclaim or let someone else proclaim that at the eleventh hour you’ve finally solved the space-time problem. Or you can start by declaring that novels can no longer be written, and then, behind your own back as it were, produce a mighty blockbuster that establishes you as the last of the great novelists. I’ve also been told it makes a good impression to begin modestly by asserting that novels no longer have heroes because individuals have ceased to exist, that individualism is a thing of the past, that all human beings are lonely, all equally lonely, with no claim to individual loneliness, that they all form some nameless mass devoid of heroes. All that may be true. But as far as I and my keeper Bruno are concerned, I beg to state that we are both heroes, quite different heroes, he behind his peephole, I in front of it; and that when he opens the door, the two of us, for all our friendship and loneliness, are still far from being some nameless mass devoid of heroes.

I’ll begin long before me, for no one should describe his life who lacks the patience to commemorate at least half of his grandparents’ existence before detailing his own. To all of you forced to live confusing lives beyond the confines of my mental institution, to all you friends and weekly visitors who have no inkling of my store of paper, I introduce Oskar’s maternal grandmother.

My grandmother Anna Bronski sat in her skirts late one October afternoon at the edge of a potato field. You could have seen how expertly my grandmother raked the limp potato tops into tidy piles that morning, ate a hunk of bread at noon smeared with dripping and sweetened with syrup, dug through the field one last time, and sat at last in her skirts between two nearly full baskets. Before the upturned and inwardly tilted soles of her boots, flaring up asthmatically from time to time and sending a flat layer of troubled smoke across the slightly tilted crust of the soil, smoldered a potato-top fire. The year was eighteen ninety-nine, she sat in the heart of Kashubia, near Bissau, nearer still to the brickworks, this side of Ramkau she sat, beyond Viereck, facing the road to Brentau, between Dirschau and Karthaus, with her back toward the black forest of Goldkrug she sat, shoving potatoes under ... 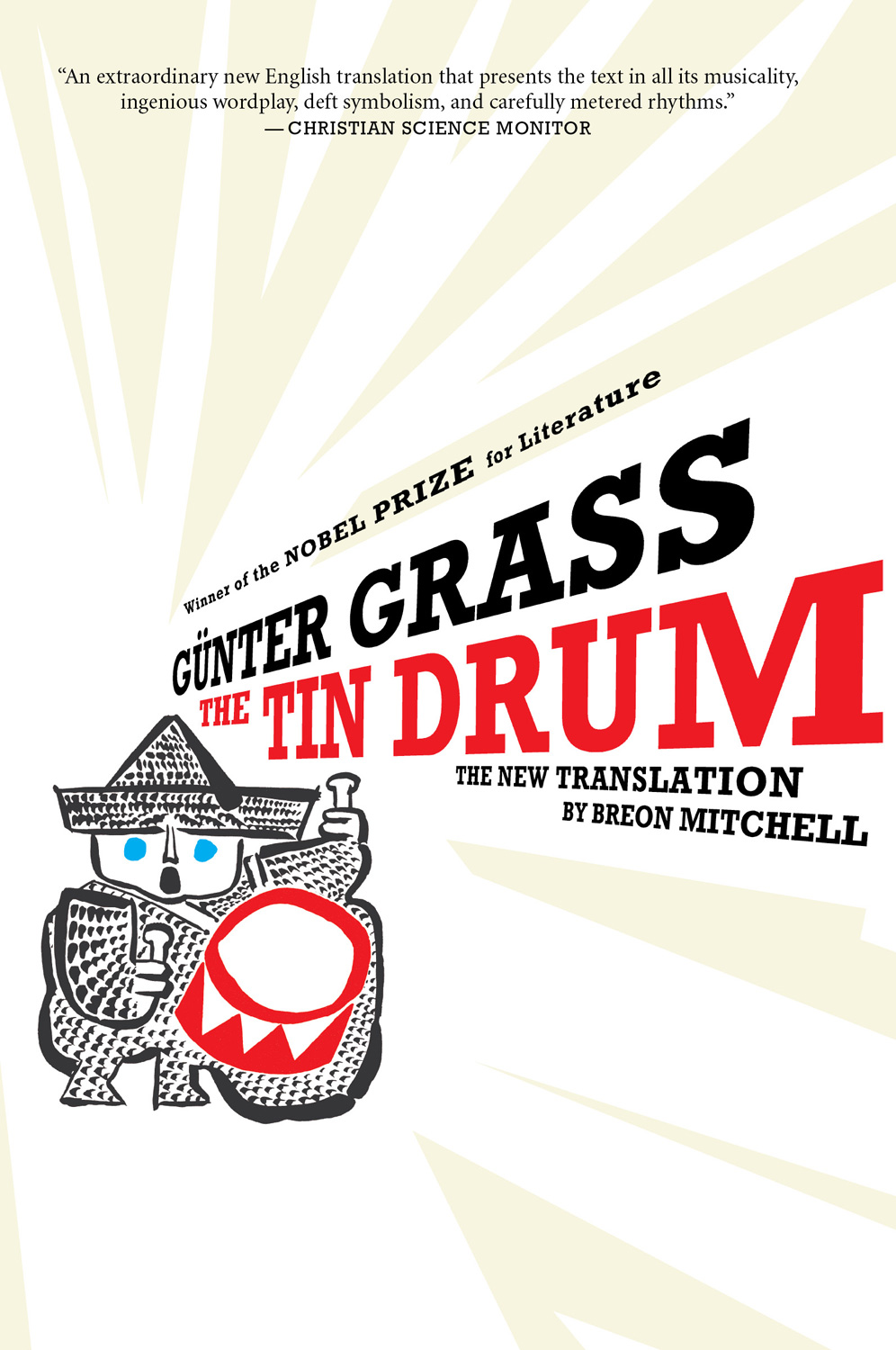