Ghosts, a kidnapping, a crew of young detectives, and family secrets mix in this new standalone mystery set in the world of the best-selling Greenglass House, from a National Book Award nominee and Edgar Award–winning author.

Ghosts, a kidnapping, a crew of young detectives, and family secrets mix in this new standalone mystery set in the world of the best-selling Greenglass House, from a National Book Award nominee and Edgar Award–winning author.

Marzana and her best friend are bored. Even though they live in a notorious city where normal rules do not apply, nothing interesting ever happens to them. Nothing, that is, until Marzana’s parents are recruited to help solve an odd crime, and she realizes that this could be the excitement she’s been waiting for. She assembles a group of kid detectives with special skills—including the ghost of a ship captain’s daughter—and together, they explore hidden passageways, navigate architecture that changes overnight, and try to unravel the puzzle of who the kidnappers are—and where they’re hiding. But will they beat the deadline for a ransom that’s impossible to pay?

Legendary smugglers, suspicious teachers, and some scary bad guys are just a few of the adults the crew must circumvent while discovering hidden truths about their families and themselves in this smart, richly imagined tale.

About the author
Kate Milford

Kate Milford is the New York Times bestselling author of the Edgar Award-winning, National Book Award nominee Greenglass House, as well as Ghosts of Greenglass House, Bluecrowne, The Thief Knot, and many more. She lives with her family in Brooklyn, New York. www.greenglasshousebooks.com and www.katemilfordwritesbooks.com, Twitter: @KateMilford

THE TWO CONSPIRATORS met as planned at three p.m. at the corner of Cafender and Thomasine Streets, in front of the old iron façade of the Ambrose Bank. Yesterday the façade had been whimsical in design, framing each window and entrance with wrought vines and flowers and bells in the shape of lilies that rang periodically for no apparent reason. Today the iron had dialed down the caprice and reconfigured itself into something more befitting a bank, with big staid columns topped by fussy capitals on either side of the massive main doors. The perfect backdrop for a heist.

The taller girl, her seal-brown hair done in braids, caught the glance of her shorter, pinker accomplice in passing. Then, without a word, she pulled a pair of sparkly green sunglasses down over her dark, deep-shadowed eyes, pushed herself off from the fluted column she’d been leaning against, and strode up the street in the wake of a young man the other had been following. She knew without looking that her partner would follow at a safe distance.

Just as he had every afternoon for the past week, her quarry walked another dozen yards down Cafender Street, then stopped at the outside counter of a café where he purchased his usual (Americano, cream, two sugars). He sat on a bench and sipped his beverage. As he sipped, he watched—surreptitiously, but to the trained eye, his attention was unmissable—the jeweler’s shop across the narrow lane.

The tall girl in the green shades strolled over to the counter and bought a cup of decaf with milk and cinnamon, which she carried to a table under the café’s awning, where she could see the man with the Americano as well as the shop he was watching so closely. A moment later her friend appeared with her own cup and a basket of steaming soft breadsticks, which she deposited wordlessly on the table between them. The two sat in silence, watching.

The man finished his coffee. He stood up and tossed his cup into a trash can next to the bench.

So far, so normal.

Then something happened that had not occurred before. The man hesitated. Instead of heading off to the right, as he had done each of the past six days he’d been casing the jeweler, he leaned back on the bench and glanced at his wrist. A moment later, in what was clearly an arranged meeting, a young woman the girls had never seen before walked up and sat next to him.

The two adults on the bench looked at each other.

The pink-cheeked girl peered at them over the rims of her tortoiseshell shades. “He’s nervous.”

The woman spoke. The girls leaned as far as they dared in the direction of the bench and could just barely make out her words. “You ready for this?”

The taller girl grabbed her friend’s arm at the same time Tortoiseshell reached for hers.

“I think so,” the man said quietly, glancing back at the jeweler’s. “Yeah. Yeah, I’m ready. You know what you’re going to say?”

The woman nodded. “I’m your cousin from out of town, and I’m looking at rings so I can bring my soon-to-be-fiancé back to take a look while we’re visiting.”

He nodded resolutely. They stood, and headed for the street. They waited for a break in the passing bicycle and foot traffic, then crossed.

The two girls looked at each other.

“Is this going down?” asked Green Sparkles in a disbelieving undertone. She glanced at her own watch. “At three p.m., in broad stinking daylight?”

“Shhh.” Green Sparkles put down her coffee and stared as the man opened the door of the shop for his companion and followed her inside. Both girls scrambled to their feet and nearly fell over their own chairs and several bicyclists in their haste to follow them. All efforts at subtlety gone, they darted to the jeweler’s front window, crouched side by side to peer over the bank of red cyclamen flowers in the window box, and watched as the man they’d been tailing and his obviously fake cousin walked up to a pretty redhead who was busy arranging merchandise in a glass case on one counter.

“They’re just going to—?” the taller one began.

“I mean, they’re trying to look like customers, right?” her companion finished.

The man and the young woman at the counter exchanged a few words; then he introduced the lady he’d come in with. Green Sparkles frowned. “Looks like they know each other, doesn’t it? The guy and the girl who works there?”

Her companion nodded. “Yeah, it does.”

“That seems less-than-ideal. If you were going to rob a place, you wouldn’t go somewhere they knew you well enough to identify you, right?”

“I wouldn’t, but then I also wouldn’t have been so obvious about casing the joint.”

Inside, the redhead and the fake cousin fell into deep conversation. After a moment, the redhead began to take rings from a glass-topped display table and arrange them on a piece of black velvet on the counter. The fake cousin made a show of trying some on, and after a moment she even had the redhead popping rings on and off her own fingers. “She’s good,” Green Sparkles said, shaking her head. “That sidekick, she’s really good. Look, she’s got the woman who works there acting like they’ve known each other all their lives and they’re just out shopping together.”

A second clerk materialized from a back room and began polishing a nearby, already-spotless counter. He probably thought he was playing it cool, but it was obvious to both girls that he suspected the aimlessly browsing young man might be up to something and thought he’d better keep an eye out.

The two women tried on a few more rings each, but they both kept coming back to one particular item. At last, after a final bit of discussion, the redhead wrote a few lines down on a business card and handed it to the supposedly almost-engaged woman. Then the fake cousin pointed across the shop to a differ...

? "[B]rimful of intrigue, plucky wannabe adventurers, and some suspiciously artful iron....Observant readers will delight in piecing together the clues to puzzle out the knots alongside the Knot....A fascinating, intricate tale of friendship and rescue."—Kirkus, STARRED review

? "[A] truly twisty brain-teaser filled with puzzles, misdirection, and adventure, all with just the right balance of emotional weight that is pitch-perfect for a middle-grade audience....Milford’s Nagspeake stories are always a treat, but this one, with its tight, clever plotting; heartening emotional growth, and dynamic setting, shines extra brightly."—Booklist, STARRED review

? "This is a perfectly plotted and well-told mystery, and the fascinating settings and characters make it unique.... Readers will delight in this old-fashioned mystery, made fresh with intriguing places and people."—School Library Journal, STARRED Review

"[A] worthy addition to [Milford's] already established setting of Greenglass House that will also appeal to new readers....Milford’s descriptive writing is a treat."—The Bulletin of the Center for Children's Books 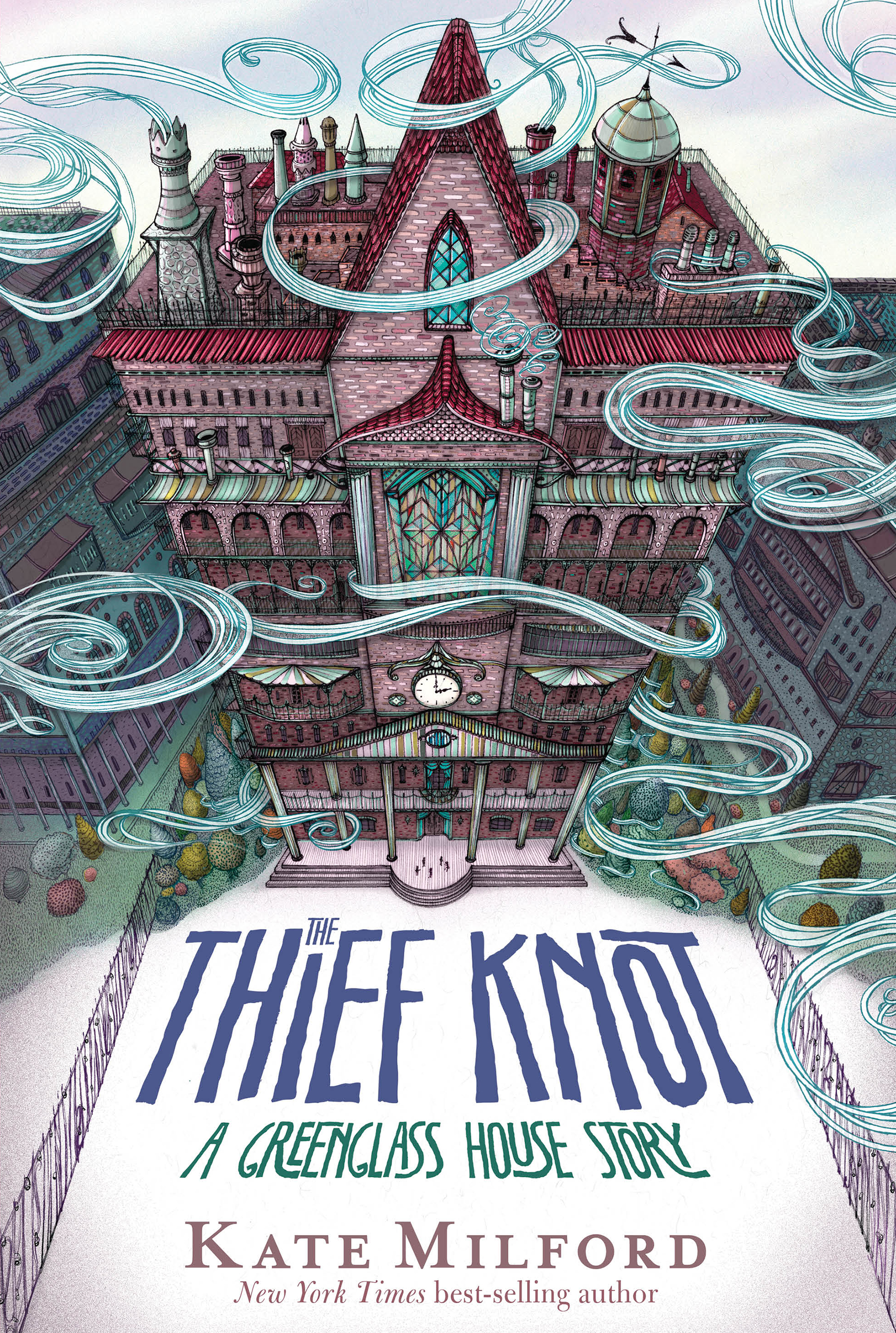