In Cia's dystopian society it's an honor to be chosen for The Testing.  But it’s not enough to pass the Test. Cia will have to survive it.

In Cia's dystopian society it's an honor to be chosen for The Testing.  But it’s not enough to pass the Test. Cia will have to survive it.

It’s graduation day for sixteen-year-old Malencia Vale, and the entire Five Lakes Colony (the former Great Lakes) is celebrating. All Cia can think about—hope for—is whether she’ll be chosen for The Testing, a United Commonwealth program that selects the best and brightest new graduates to become possible leaders of the slowly revitalizing post-war civilization. When Cia is chosen, her father finally tells her about his own nightmarish half-memories of The Testing. Armed with his dire warnings (”Cia, trust no one”), she bravely heads off to Tosu City, far away from friends and family, perhaps forever. Danger, romance—and sheer terror—await.

About the author
Joelle Charbonneau

Joelle Charbonneau began telling stories as an opera singer, but these days she finds her voice through writing. She lives near Chicago with her husband and son, and when she isn't writing, she works as an acting and vocal coach. www.joellecharbonneau.com Twitter @jcharbonneau Instagram @joellejcharbonneau

Turning the knob, I push the door open and take a step inside. The smell, urine mixed with corncakes, hits me first. Then I see her. Dangling on a colorful rope. Hanging from the ceiling. Face red and blotchy. Eyes wide with horror. Neck gouged and bleeding where she fought from instinct or because she changed her mind.

I scream as the reality of what I see hits me. Hard.

Hands help me stand. Lead me into the hall. Someone asks me to wait and other people in jumpsuits come running from every direction. I clutch my bag to my chest like a security blanket as activity swirls around me. Ryme is cut down from the ceiling. A gurney appears. When she is whisked past me, I recognize the rope still around her neck: her dress, the one she looked so lovely in yesterday, tied to a bed sheet.

I can’t help my stomach from emptying or the tears that flow hot and fast — for her, for me, for not seeing the desperation and depression under the arrogant façade. Did my taunting her with finishing the final written test push her over the edge? Could a kind word have saved her?

I blink and realize Dr. Barnes is holding my shoulders. Looking into my eyes. I blink twice and swallow the bile building in the back of my throat. Mutely, I nod that I hear him.

“They are going to assign you a different room.” He leans against the wall next to me. “Would you like to talk about

No. But I will. I have to. Softly, I tell him about Ryme’s arrogance and her taunts today. My reaction and the apology I eventually gave. Even the corncakes and what I suspected they might contain. He’s a good listener. His deep brown eyes meet mine without censorship. His head nods, encouraging me to say more — never once letting his eyes travel to the officials walking in and out of the room, cleaning the floor next to me, talking in hushed tones about removing her belongings.

When I am done, I feel empty, which is better in a way than feeling smothered by guilt. Dr. Barnes assures me Ryme’s death is not my fault. As we discussed earlier, stress is difficult. Some students handle stress better than others. Some can’t eat. Some never sleep. Ryme took her own life. While this is a tragedy, it is better for the entire Commonwealth population to learn now that she is not capable of dealing with the kinds of pressure she would be forced to deal with in the future. This event is unfortunate, but The Testing served its purpose. He hopes Ryme’s choice to end her candidacy will not impact the results of mine.

End her candidacy? Inside I am icy cold. An official in purple informs us my room is ready, and Dr. Barnes gives my shoulders a squeeze. I smile and tell him I’ll be fine and that talking to him made me feel better. I hope he can’t see the lie. Because while his tone was kind, I heard the indifference in his words. To him, this was just another test. One Ryme failed. If I am not careful, I will fail, too.

I am shown my new room at the very end of the hall. The walls are painted yellow. They remind me of the dress Ryme was wearing when I first met her. The official asks me if I’m okay not having a roommate. If I don’t want to be alone he is certain a female official would be happy to sleep in the spare bed.

No, I do not want to be alone. Awake, I am having trouble keeping Ryme’s lifeless eyes out of my head. Asleep, I will be defenseless to stop her from haunting me. Knowing I will be alone through the ordeal makes me want to curl up in

But Dr. Barnes’s words ring loud in my head. The Testing is about more than what happens in the classrooms. Asking for help through the night will be seen as a weakness. Leaders are not weak. The Testing is looking for leaders.

So I thank the official and tell him, “I’m fine being alone.” He tells me to let the official at the desk know if I change my mind. They can even give me drugs if I need help sleeping. Then he shuts the door behind him.

I look around the room. Aside from the color it is an exact replica of the one I previously occupied. I hear muted voices and the sound of footsteps. Other candidates returning to their rooms from dinner. For a moment, I consider opening my door and going in search of my friends. A smile from Zandri, a hand squeeze from Tomas, or even one of Malachi’s quiet looks would help ease the sadness. But I don’t open the door because that, too, could be considered a weakness. Instead I shower, change into my nightclothes, wash the daytime ones, and hang them to dry.

Lying on the bed, I stare up at the ceiling, trying to conjure happy memories. Anything to ward off images of Ryme hanging from the light fixture. I can’t help but wonder whether my father witnessed something similar. Whether his brain had made up an even worse memory of The Testing to compensate for the horrific one he used to have. At this very moment, I believe it is more than possible.

Everything is quiet. The others have taken to their beds and are sleeping in preparation for whatever is to come tomorrow. I am still awake. I keep the lights blazing bright and fight against the heaviness of my eyes. I am losing the battle when something catches my eye. A small circular glint in the ceiling. One that matches the one I saw in the skimmer.

It is all I can do to keep the discovery off my face. I don’t know why it should surprise me that there is a camera watching even when we are doing the most mundane chores like sleeping and getting dressed. But it does. Is this room alone being watched? Because I found Ryme? Immediately, I reject the idea. If they are watching one room, I am certain they are watching them all. The implication of that sucks the air out of my lungs. If there are cameras in every room, someone watched Ryme as she stripped her bed of the sheet. Tied it to her dress. Reasoned out the best place to affix it to the light fixture on the ceiling. They watched as she stepped off the chair. Saw her struggle against the rope, claw her throat in an attempt to free herself, and go limp as her body shut down.

They could have saved her. Instead, they let her die.

I force myself to appear calm as I walk over to the light switch and cast the room into shadows. Whoever is watching, I don’t want them to see the horror I feel. I bury my head under the covers and out of habit clutch my bag to my chest. I wonder if the people behind the screen are reliving Ryme’s death while they sleep tonight. It is mean of me, but I hope they are because I am even before sleep pulls me under.

Ryme’s blotchy red face and her glassy, blood-streaked eyes follow me into my dreams. Her voice taunts me with my inadequacies. She offers me corncakes and this time I take one and eat it. Each time I wake, I force myself to go still. Not to call out or thrash about. I keep my head under the covers just in case the camera can see more than I believe, and do my best to wipe my mind clean of the horrors before dropping into sleep again.

When the morning announcement comes, I am grateful to climb out from under the sheets. I go into the bathroom and study myself in the reflector. I look tired, but no more so than I did yesterday morning. Taking this as a good sign, I pull on my clothes and brush out my hair while scanning the bathroom for...

“The Testing is a chilling and devious dystopian thriller that all fans of The Hunger Games will simply devour. Joelle Charbonneau writes with guts and nerve but also great compassion and heart. Highly recommended.”—Jonathan Maberry, New York Times best-selling author of Rot & Ruin and Flesh & Bone

"I galloped through this excellent read; I was in suspense the whole time."—Charlaine Harris, author of the Sookie Stackhouse series

"There is nothing standardized about this Testing. Charbonneau's imagination will surprise readers at every turn."—Jennifer M. Brown, children's editor, Shelf Awareness

"Action-packed and full of twists, The Testing will keep you guessing until the very last page—and desperate for the next book!"—Erica O'Rourke, author of the Torn Trilogy

"Charbonneau jumps into the packed dystopia field with a mashup of Veronica Roth's Divergent and Suzanne Collins' Hunger Games trilogy, but she successfully makes her story her own."—Kirkus

"Charbonneau is a fantastic story teller and this book is a tribute to that background. The intrigue in The Testing passes evaluation of what a good dystopian novel should represent."—VOYA, 4Q 5P M J S

"The plot twists are well integrated and will keep readers on edge awaiting the next volume."—Horn Book

"The influence of The Hunger Games is obvious, and The Testing will satisfy readers who want similar dystopian adventures." —SLJ 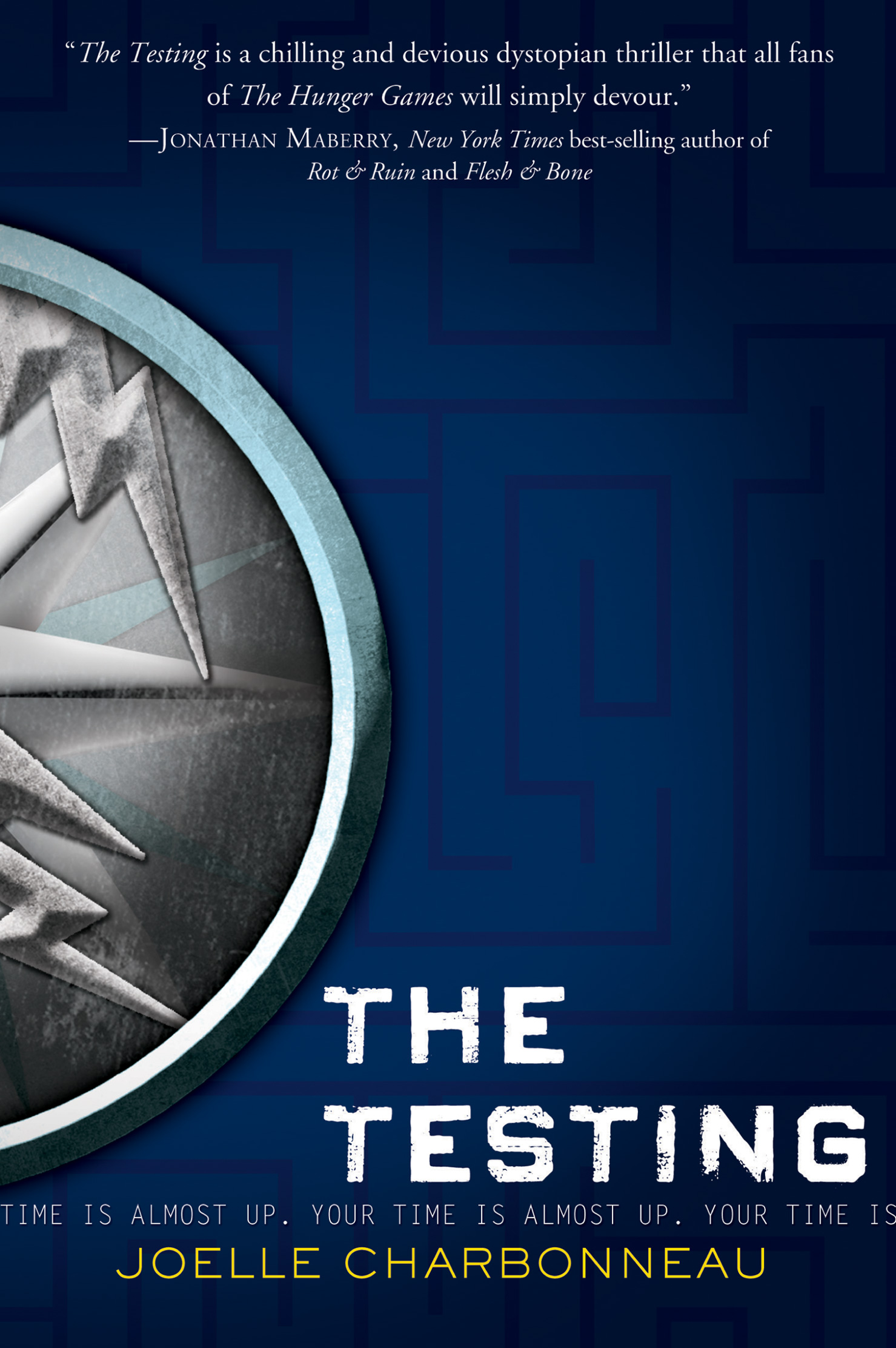