Exploring the power of stories and storytelling, Sarah Beth Durst presents the mesmerizing adventure of a girl made of living stone who braves unforeseen dangers and magical consequences on a crucial quest to save her family.

Mayka and her stone family were brought to life by the stories etched into their bodies. Now time is eroding these vital marks, and Mayka must find a stonemason to recarve them. But the search is more complex than she had imagined, and Mayka uncovers a scheme endangering all stone creatures. Only someone who casts stories into stone can help—but whom can Mayka trust? Where is the stonemason who will save them?

Action and insight combine in this magical coming-of-age novel as the young heroine realizes the savior she’s been searching for is herself.

Sarah Beth Durst is the author of fantasy novels for children, teens, and adults. Winner of the Mythopoeic Award and an ALA Alex Award and thrice nominated for the Andre Norton Award for YA Science Fiction and Fantasy, she lives in New York. Visit her online at sarahbethdurst.com and on Twitter @sarahbethdurst.

He’d warned Mayka and the others a year ago, when he first began to slow—?but he moved so slowly anyway that she hadn’t believed him. Not really. She’d always thought they’d have one more afternoon. On the mountain, there was always another afternoon. Another sunset. Another sunrise. Until there wasn’t.

She still visited him every day and talked to him as if he could hear her. He had moss growing on him over the faded markings on his shell, the way he liked it, but this morning, Mayka had had the idea he’d also like flowers. Yellow ones, like tiny suns. She decided to plant them in a circle around him, even though she knew he couldn’t see them.

Kneeling next to him, she plunged her hands into the dirt, fingers first, using them like spades to dig a hole. She then picked up a flower, cupped its roots in her palms, and gently placed it in the hole. As she scooped dirt around the plant, she wondered what it would feel like to cry, like Father used to. When he was sad, tears would drip down his soft cheeks, curving through his wrinkles. She remembered she used to reach out and catch a tear on her finger. He’d tell her they tasted like the sea, which seemed miraculous to her.

Mayka would never cry. Like Turtle, she was made of stone, carved by Father long ago, and she couldn’t cry, even when she very much wanted to.

“You picked a pretty spot to stop,” she told Turtle, as she planted a second flower. He had chosen to stop on her favorite overlook, the one with the pine trees. I could stay here for hours, she thought. Even days. From here, she could see the sun spread across the valley, brightening the low-hanging morning mist until the mist shredded itself into strips of clouds. Far below, a river cut through the forests and fields. Reflecting the sky, it looked like a curling line of blue paint, with the forests as blots of dark green and the fields like smears of yellow and the quarries as patches of gray. It was so peaceful that she—?

Immediately, Mayka held one hand up over her head.

A stone ball hit her palm. She closed her fingers around it.

Well, it was peaceful, she thought. Sorry, Turtle. Standing, she wound her arm back and threw the stone as hard as she could. It sailed over the edge of the cliff.

“Woo-hoo!” the ball cried as it unfurled its wings. Feathers extended, the ball-that-was-really-a-bird swooped up and then looped in a figure eight before flying back to the cliff. He landed on a branch near Mayka and cocked his head so he was looking at her sideways. “Did that make you feel better? Because it made me feel better.” When he wasn’t curled into a ball, Jacklo looked like a gray songbird, with three tail feathers that stretched a few inches beyond his feet, carved out of smoky quartz. He had a crest of stone feathers on his head. “Are you okay, Mayka? Everyone’s worried about you.”

“I wanted to be alone, Jacklo,” Mayka reminded him. She’d been clear this morning: she’d wanted a few hours with Turtle, to say goodbye. She’d informed all her friends at once, in hopes they’d listen. “I told you that.”

“But now we can be alone together!” He nestled into the crook of the branch.

Mayka looked at him for a moment as she considered how to explain that wasn’t what she meant. He won’t understand, she thought. But she couldn’t be angry with him. It was just the way he showed he cared. “Yes, Jacklo, we can.”

Kneeling again next to Turtle, she planted another flower. Around her, the wind rustled the pine needles, making a shushing sound. She wondered what these flowers smelled like and if the wind would carry their scent down the mountain.

“Risa says I’m not good at being alone,” Jacklo chattered. “She thinks I can’t do it. She says I can’t ever sit in silence and just—”

“Oh. Right.” He ruffled his feathers, which sounded like pebbles tumbling down a slope, then fell quiet again.

She wiped a bit of dirt from the ridges around Turtle’s eyes. He’d begun the trek here months ago, though it wasn’t far from home. He’d pondered each step before laboriously shuffling forward. She should have realized—?

“You know, sometimes when I listen to quiet, I hear all the noises in it, and it’s not quiet at all,” Jacklo said. “There’s the wind and the birds and the bugs and—”

She dug the last hole. Turtle had realized on his own that the marks Father had carved on his stone shell to awaken him were fading—?rubbed away by wind, water, and time—?and he’d calculated how far he had to walk in the weeks he had left. He’d made it to the exact place he wanted before he stopped. She only wished she’d understood sooner. Without a stonemason to recarve his marks, Turtle would sleep forever.

Lowering the last plant into the hole, she said, “Yes, Jacklo? What is it now?”

Mayka looked up at the bird. He was hunched over, with his shoulders up and his head ducked low. His wings were tight against his body. “You are? Why?”

“Oh.” And like that, her annoyance melted away. This she understood. She’d been trying hard not to think about exactly this for the past week. Me too, she thought, but she didn’t say it out loud. Instead, she held up her hand. “Want me to throw you again?”

His head shot up, and his wings unfurled. “Only if it will cheer you up too.”

“It will,” she promised her friend. “We’ll cheer each other up.”

Pushing himself off the branch, he rolled into a ball as he flew toward her. She caught him, pivoted, and threw him as hard as she could.

He arched up toward the sun and then—?with another “Woo-hoo!&rdq...

"Mayka's kindness and steady loyalty, her friends' animated and varied personalities, and some downright brilliant problem-solving will carve themselves into readers' memories."—Kirkus, STARRED review

"Mayka is a strong, believable heroine that readers will root for. ­..This exciting adventure has moments reminiscent of The Wizard of Oz, in which the protagonist must rely on herself and her friends to find inner courage and her way to safety."—School Library Journal, review

"With a deft balance between the thrilling journey and the artfully built world of magic, this is as beautiful and adventurous as the graceful stone birds accompanying Mayka on her journey."--Booklist

"Mayka’s thoughtful explorations of how the stories told about us shape our lives will especially appeal to young readers beginning to tell their own stories."--Bulletin for the Center of Children's Books 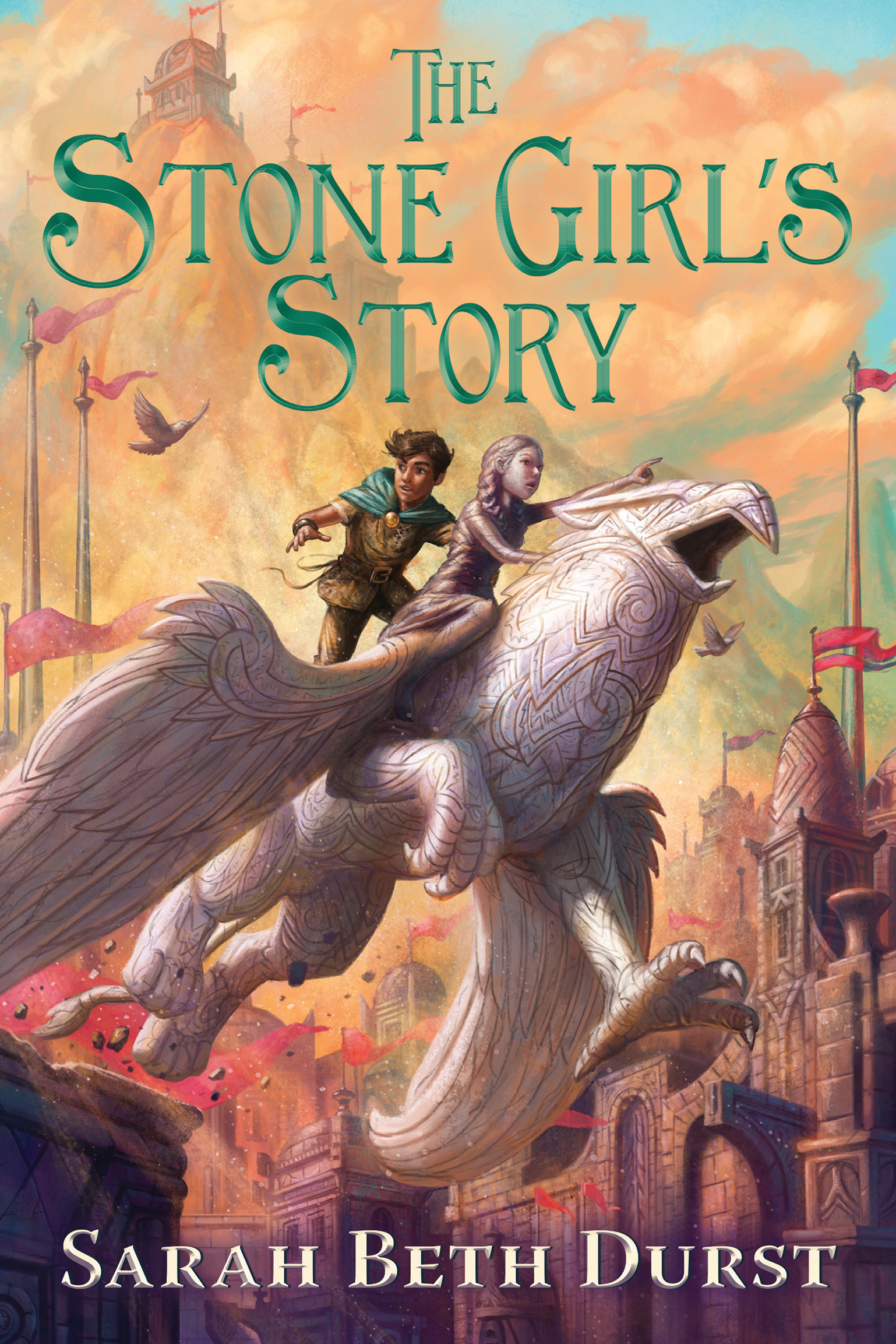