From the inimitable Nick Cave comes a mesmerizing exploration of love, inspiration, and memory that chronicles his 2014 22-city American tour with The Bad Seeds.

From the inimitable Nick Cave comes a mesmerizing exploration of love, inspiration, and memory that chronicles his 2014 twenty-two-city American tour with the Bad Seeds.

Spurred by encounters with modern-day North America, beset by longing and exhaustion, Cave teases out the significant moments, the people, the books, and the music that have influenced him. Drawing inspiration from Leonard Cohen, John Berryman, Patti Smith, Sharon Olds, folk ballads and ancient texts, The Sick Bag Song takes the form of a quest, turning over questions of creativity, loss, death, and romance. Both mythic and grounded in the now, it lies somewhere between The Waste Land and Fear and Loathing in Las Vegas. It is also a companion piece to the Sundance award-winning feature documentary 20,000 Days on Earth.

This beautifully packaged hardcover will be a centerpiece for any fan's library, as well as a poetic introduction for the uninitiated to the limitless imaginative universe of this living legend.

About the author
Nick Cave

The lead singer of The Birthday Party, The Bad Seeds, and Grinderman, NICK CAVE has been performing music for more than thirty years. He has collaborated with Kylie Minogue, PJ Harvey, and many others. His debut novel, And the Ass Saw the Angel, was published in 1989 and was followed by the internationally best-selling The Death of Bunny Munro. Born in Australia, Cave now lives in Brighton.

A Publishers Weekly Pick of the Week

"A lyrical odyssey that feels like a blend of Kerouac’s On the Road and Hunter S. Thompson’s Fear and Loathing in Las Vegas."—READ IT FORWARD

"Elusive; darting glimpse into the complex universe that is the mind of Nick Cave" —LIT REACTOR

“Cave chronicles each of his city stops, weaving thoughts on beauty, disgust, longing and the toll of travel into a piece of road literature that holds its own next to the giants of the genre…[it is] a journey that vacillates between jaw-dropping turns of phrase and point-blank confession.”—BOOKPAGE

"The Sick Bag Song is a reminder of the power of language when condensed into poetry." —SHEPHERD EXPRESS

“Each North American location on Cave’s journey inspired a passage of reflection, witness, or imagination. These significant human moments are ones of loneliness, inspiration, and encounter, and Cave never shies away from making these experiences glitter, not so that they are rendered more pure or beautiful but rather in a way that makes them more realistic… A radical odyssey of interaction and influence that is part poetry and part diary… Many are viewed through his perception as a performer, even as he reminds us that the performer is not an icon but a human being. It makes perfect sense to call this book a ‘song’; it is sung with a voice of memory and yearning.” —BOOKLIST

“[Cave’s] ideas are just fascinating, and his thought process is fascinating. It’s a very personal book and also it’s a little sad to read because he wrote this leading up, it was his tour of 2014, and you read it and you know that his life is drastically going to change after this tour because his 15-year-old son died in the summer of 2015.”—BOOKRIOT

“The gloomy Aussie rock star ponders the ways of the road in this blend of prose and poetry... Cave channels Allen Ginsberg.” —KIRKUS REVIEWS

“Lyrical, hallucinatory and laced with sly wit, The Sick Bag Song is a revelation and a pleasure.” —Hari Kunzru, author of The Impressionist and others

“Mad and amazing.” —Ian Rankin, author of Knots and Crosses and many others

"The narrator’s obsessive thoughts about his young self facing death juxtaposed with the illusions of fame . . . offer an interesting perspective on mortality." —SUNDAY HERALD (UK)

"Mr. Cave is experimenting with a new literary form – a mash up of prose, poetry song lyrics and autobiography."—INTERNATIONAL NEW YORK TIMES

"A radical odyssey of interaction and influence that is part poetry and part diary...Cave never shies away from making these experiences glitter, not so that they are rendered more pure or beautiful but rather in a way that makes them more realistic. Many are viewed through his perception as a performer, even as he reminds us that the performer is not an icon but a human being. It makes perfect sense to call this book a “song”; it is sung with a voice of memory and yearning." —BOOKLIST

"A dark journey written in a style you might describe as modern beatnik...You can at times detect the rhythms of Ginsberg’s famous poem Howl in Cave’s prose...It’s a book of longing and there are many passages that are beautiful and engaging.There is humour, too, and flights of fantasy...This is Cave in high definition. He is, quite deliberately, fully exposed." —NEW ZEALAND LISTENER

"The Sick Bag Song is an exhilarating exploration of the bleeding line between the creative space and everyday life...a showcase for the abstract beauty of words which flow and tumble towards meaning...This little book swept me up, and as soon as I finished it the first thing I wanted to do was to read it again." —INDAILY (Australia)

"Elegant indie-rock oddity Nick Cave has woven his 2014 North American tour diary with strands of memories, song lyrics, mystical symbolism and dream-scenes and spun an epic, modern poem which brings the Beat bang up to date...The way Cave meanders between fantasy and reality during the 22-city tour gives his writing real weight...Cave's lyrics and music have often collided the mystic with the mundane while maintaining humour, style and honest storytelling – The Sick Bag Song is one of his more adventurous and successful offerings." —STUFF (New Zealand) 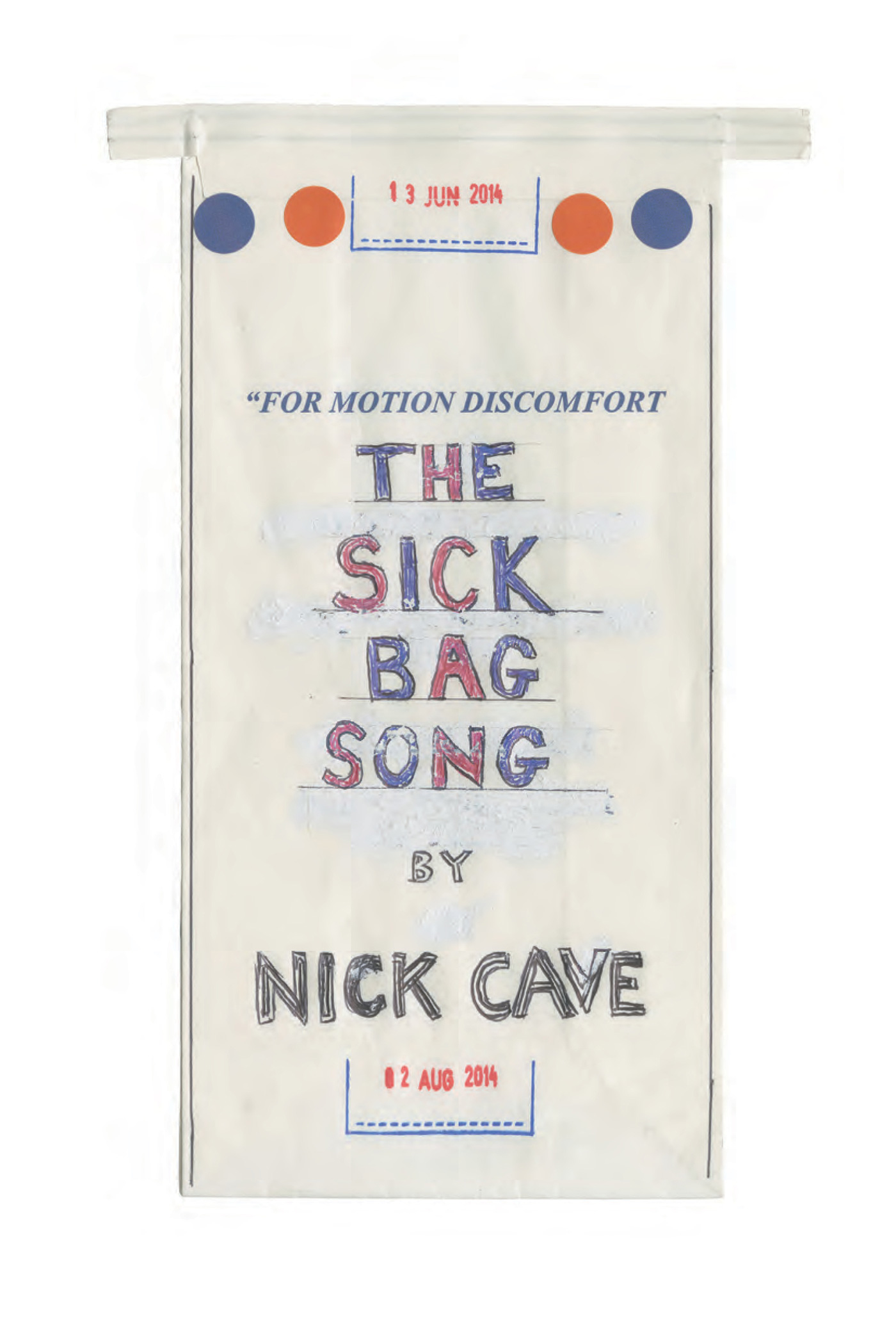