Far off the grid in northern Sweden, a small network of people have been tasked with hiding the last remaining trolls from the public eye, and one young woman will do whatever it takes to bring the truth to light, in this literary thriller that is "intensely riveting and constantly surprising" (Karl-Ove Knausgard).

“A fantastic novel in every sense of the word…not only because Spjut has accomplished the masterstroke of writing convincingly about the existence of trolls and other mythical creatures in the Nordic forests, but also because all this unfolds in a language that captures the everyday reality we know so well, with such precision and exquisite style that the words seem to sparkle on the page.”

"A fun, cunning crime thriller...If you enjoy the novels of Michael Koryta or Tana French's The Secret Place...you might eat up The Shapeshifters."

Summer 1978. A young boy disappears without a trace from a summer cabin. His mother claims he was carried away by a giant. He is never found.

Twenty-five years later, another child goes missing. This time there’s a lead, a single photograph taken by Susso Myrén. She’s devoted her life to the search for trolls, legendary giants known as stallo who can control human thoughts and assume animal form. Convinced that the trolls are real, she follows the trail of missing children to northern Sweden. But humans, some part stallo themselves, have been watching over the creatures for generations, and this hidden society of protectors won’t hesitate to close its deadly ranks.

Mixing folklore and history, suspense and the supernatural, The Shapeshifters is an extraordinary journey into a frozen land where myth bleeds into reality.

About the author
Stefan Spjut

Stefan Spjut has worked as a literary critic for the Swedish newspaper Svenska Dagbladet and the culture editor for Norbottens-Kuriren. Stallo is his second novel, the first to be available in English.

The worm glued to the tarmac is as long as a snake. No, longer. It reaches all the way to the grass verge beside the main road. The boy’s eyes follow the slimy ribbon and notice that it stretches across the ditch and curls into the belly of a grey animal. A badger. Dead but still looking. Its eyes are black glass and one paw has stiffened in a wave.

The car door opens and his mother calls, but he cannot tear himself away from the animal.

Then she gets out.

She stands beside the boy. Wrinkles her nose so her glasses ride up.

‘Those are intestines. A bird pulled them out. Or some other animal.’

He wants to know which bird, which animal.

He presses his cheek against the window but the pine trees are so tall he can hardly see where they end. His knees are gripping a large Fanta bottle and from time to time he blows into the neck. The glass is warm and the last few mouthfuls have also been warm. They have been driving for almost three hours, and he has never travelled for such a long time in a car before.

When they stop he does not understand that they have arrived, because they are right in the middle of the forest. There is no sign of a cabin. Only trees.

His mother sits motionless for a while, lost in her thoughts, before pulling the key from the ignition and climbing out. She opens his door.

It is as if the mosquitoes have been waiting for him. They come from all directions and land on him in such a teeming mass that his legs look mottled. He makes no attempt to brush them away but instead stiffens and lets out a plaintive yell.

His mother heaves the bag onto the bonnet and finds a bath towel, which she wraps around him like a cape. After she has tied it round his neck she starts running, with the bag in one hand and the plastic carrier from the supermarket in the other. She leaves a kind of furrow behind her in the long grass. She is wearing a short-sleeved top in mint-green velour, and an oblong-shaped sweat mark is spreading out between her shoulder blades. Her flared jeans flap around her ankles.

He follows after her and the little figures in his backpack rattle inside their plastic box. He holds the shoulder strap with one hand and uses the other to grip the towel to stop it from flying away. Running is difficult and soon his mother’s back disappears in the dense greenery in front of him. He calls out to her to wait, but she carries on, calling over her shoulder for him to hurry up.

The ferns have formed tight, thick clumps, and beyond them the fir trees tower above the pitch-black ground. All around him the spiky stalks of the grass hum and tick with insects, and his cloak flies behind him as he runs.

The forest is a silent reflection on the windowpanes. Pine cones, thin twigs and drifts of old pine needles are piled up on the metal roof. The fir trees sway high above against a sky that has grown pale.

His mother has reached the door. Pulling a face she leans forwards, feeling under a windowsill.

‘Oh, please,’ she says, bending up the metal and forcing her fingers underneath while blowing puffs of air to each side to keep the mosquitoes away.

The boy has untied the towel and pulled it up over his head like a headscarf. He spins around in pirouettes and his trainers thump on the veranda. Grass has grown up in places between the planks, and he stamps it under his feet. There is an ashtray filled with water resting on the wooden railing, and a fly is floating on the surface. Or could it be a beetle? All he can see are crooked legs sticking out. But when he looks closer he notices more insects. The water is thick with them. It looks like a disgusting soup, the kind witches make.

His mother has knelt down and is trying to look under the windowsill.

Then she starts hunting in the grass below the window.

The boy watches her for a while. Then he tries the door handle.

She pushes him in front of her, lifts in their luggage and slams the door shut behind them. The boy stands in front of a wall hanging of dark swirls and hard, staring eyes and he wonders what it is supposed to be. An owl? Then he gets another push from the hand holding the plastic bag. The bag is cold from the milk cartons at the bottom.

The words leave his mother’s mouth and seem to fasten in something inside, a web left behind by the silence that has reigned for so long inside the cabin. The boy feels it and is hesitant. He would prefer to stand where he is for a while.

With wary eyes he walks inside and looks around.

The walls are covered in unpainted pine panelling below and woven wallpaper above. Small pictures and copper pans hang here and there. Through a door he sees a bunk bed with fringed bedspreads. He peers in. The room is very small. Beside the bed is a stool with a book on top of it. Outside the window stands a tree. Its pointed leaves almost touch the windowpane.

He lays his rucksack on the kitchen table, unzips it and takes out the plastic box. It is an old ice cream container with BIG PACK written on a wrinkled label on the lid. Carefully he pulls off the elastic band because he knows it might snap, then tips the figures out onto the table. The ones that came free in boxes of biscuits are all tangled up as if to show they belong together. He also has Smurfs. A hippopotamus with a gaping mouth. A gorilla beating its chest. A galloping horse unable to stand up. A man who is sitting down. He is blue all over, even his head.

Opposite the wood-burning stove is a little sofa, and he sits down on it with a Smurf in each hand. A floor lamp with a pleated shade leans over him. There is no light bulb in it, only a gaping hole. They have borrowed the cabin from someone his mother works with, and the boy wonders why the owner has not put in a bulb. Perhaps for the same reason that there is no television.

He runs his hands over the sofa’s upholstery, which is mustard yellow and knobbly. He knows if you play about wildly in a sofa like this you can burn yourself.

There is a small kitchen area, and he walks over to look. The fridge is so small he has to bend down to open it. It is empty inside; no light comes on and it does not even feel cold. He has to push the door firmly to make sure it stays shut. The wall above the draining board has the same cork covering as the floor—reddish brown with a hexagonal pattern.

There is a string of plastic...

"A fun, cunning crime thriller...If you enjoy the novels of Michael Koryta or Tana French's The Secret Place...you might eat up The Shapeshifters."

“A fantastic novel in every sense of the word…not only because Spjut has accomplished the masterstroke of writing convincingly about the existence of trolls and other mythical creatures in the Nordic forests, but also because all this unfolds in a language that captures the everyday reality we know so well, with such precision and exquisite style that the words seem to sparkle on the page.”

“Spjut turns Scandinavian mythology upside down in a shades-of-gray world built for lovers of fantastical suspense.”

"This spooky novel is great for open-minded mystery/thriller readers who enjoy a bit of genre blending as well as fantasy fans." 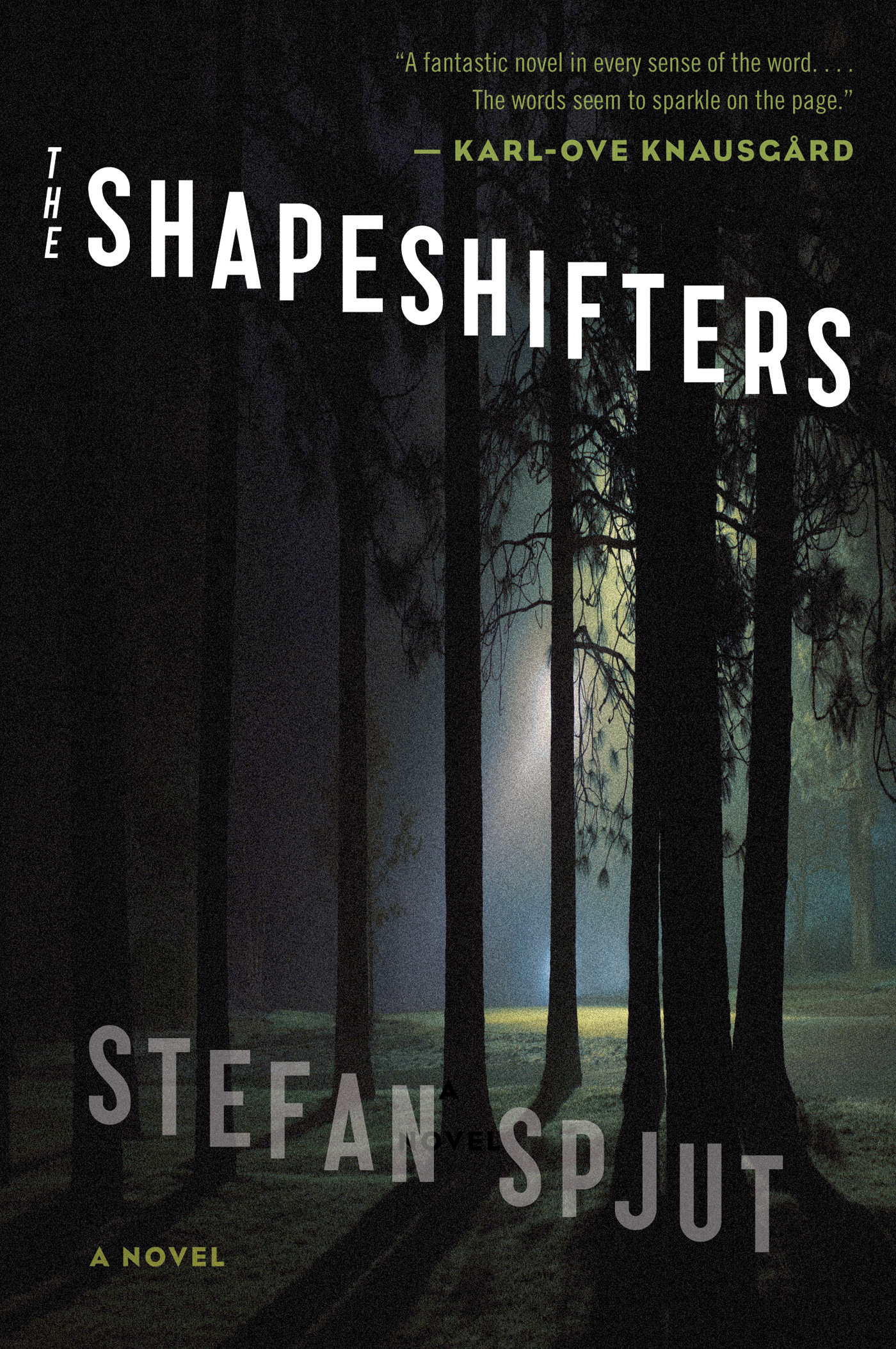