THE SERVANTS’ QUARTERS, a complex and sophisticated love story, evokes a vanishing world of privilege with a Pygmalion twist.

Haunted by phantoms of the Second World War and the Holocaust, young Cressida lives in terror of George Harding, who, severely disfigured, has returned from the front to recover in his family’s stately African home. When he plucks young Cressida’s beautiful mother and her family from financial ruin, establishing them in the old servants’ quarter of his estate, Cressida is swept into a future inexorably bound to his.

In the new setting, she finds that she is, after all, indentured. She is conscripted to enliven George Harding’s nephew, the hopelessly timid Edgar, to make him "wild and daring." And she takes on this task with resentful fury, leading the boy astray, and, in the process, learning to manipulate differences in power, class, background and ambition.

Only slowly does she come to understand that George Harding himself is watching her. And waiting.

The Servants’ Quarters, a complex and sophisticated love story, evokes a vanishing world of privilege with a Pygmalion twist.

Haunted by phantoms of the Second World War and the Holocaust, young Cressida lives in terror of George Harding, who, severely disfigured, has returned from the front to recover in his family’s stately African home. When he plucks young Cressida’s beautiful mother and her family from financial ruin, establishing them in the old servants’ quarters of his estate, Cressida is swept into a future inexorably bound to his. In the new setting, she finds that she is, after all, indentured. She is conscripted to enliven George Harding’s nephew, the hopelessly timid Edgar, to make him "wild and daring." And she takes on this task with resentful fury, leading the boy astray and, in the process, learning to manipulate differences in power, class, background, and ambition. Only slowly does she come to understand that George Harding himself is watching her. And waiting.

About the author
Lynn Freed

LYNN FREED was awarded the inaugural Katherine Anne Porter Award for fiction by the American Academy of Arts and Letters. She is the author of six novels, a short story collection, and a collection of essays.

If every family chooses someone to punish, I was the one chosen by mine. Mr. Harding, for instance. When he came to lunch, Ma always put him next to me. Why me? I wanted to know. Why not Miranda, she’s a freak herself? Every night Miranda woke up screaming that the Germans were coming for her over a wall. War I kept telling her, it’s war, not wall! But Ma just told me to keep my oar out of it, Miranda had a fixation, she said, and anyway, what would I know about the war, I hadn’t even been born until it was over. So it was hopeless. Every Sunday I was stuck next to Mr. Harding, and every night Miranda was allowed to go on screaming until Ma came down the passage with the DDT.

Nightmares and mosquitoes were the only reasons we were allowed to wake Ma up. If it was a nightmare, she’d just switch on all the lights and tell us to go back to sleep. But if it was a mosquito, we had to try to catch it and put it in a matchbox so that the man from the mosquito department could know just which sort it was and where to find its breeding ground — stupid, if you ask me, because the mosquito man himself said they can breed overnight in a wheelbarrow, or an upturned avocado-pear leaf.

At first I thought mosquitoes were the reason Mr. Harding wore a veil over his panama hat. But no, said Ma, he wore the hat because he’d been shot down by the Germans in a ball of fire and had had to drag himself, still burning, to hide behind a wall. It was men like George Harding, she said, who’d won the war for us, and if we thought hiding behind a wall had been the end of it, we’d be quite wrong, because then there’d been operation after operation without benefit of ether, and yet look how cheerful he was! Look how much he loved us children!

But he didn’t love us, I could have told her that. I did tell her. I said, “I don’t like him, and I hate his voice, and I don’t want to sit next to him anymore.” What I couldn’t tell her was that the war was becoming a terror for me, too — that it had taken the shape of Mr. Harding’s scarred, pink, dented head with its freckles, and its false eye, and its sprouts and tufts of hair. Just as I’d be squinting to block out the bad side of it, he’d twist the whole thing around to look down at me and say, “Would you pass the butter please, Cressida?”

When he came to the house, the dogs had to be locked in the sewing room, and even then they went wild at the sight of that hat and veil sailing along the crazy paving. At first he’d worn the hat inside, too, even to the table, and I’d try to keep my eyes on his hands, the way his fork disappeared under the veil without even touching it. His hands themselves were normal — large and straight and strong. As long as you kept looking at them, you could almost forget you had never seen his face.

But then, one day, just as we were settling into the lounge for coffee, a gust from the floor fan lifted the edge of his veil and he made a wild grab for it. The trouble was he grabbed too fiercely and pulled the whole hat askew. So then there he was, staring out at us like a Cyclops, and I turned to Miranda and squinted one eye, sucking in my lips hideously. And she ran out of the room like a baby.

“Oh George!” my mother said, trying to cover up. She waved her cigarette and looked straight at him in that way of hers. “Why not just take the hat off? You don’t need it here, with us.”

He hesitated for a moment, but then he did lift it off. He put it upside down on the arm of his chair, folding the veil neatly inside. Meanwhile, Ma herself couldn’t help staring. Everyone was staring, even Miranda from the other side of the French doors. Only Phineas remembered to take the sugar bowl over to him and keep the tongs towards him as he held it out. So why can’t you put him in the kitchen with Phineas? I asked Ma as soon as Mr. Harding had left. But she only turned on me as usual. “You’re a disgrace!” she said. “Whatever you did to send Miranda out like that! You’re a troublemaker! You’re a bad seed!”

She’d got the idea of the bad seed from a book she’d read. She often got ideas like this. After she saw The Children’s Hour at Film Society, she started asking whether Bunch had ever tried to kiss us on the lips. Whatever the case, Ma said, we were not to walk around in the altogether when Bunch was staying, and, if she forgot to take her towel to the bathroom again, we were just to leave it hanging on the doorknob. Never mind that Bunch was mad, never mind that she was our aunt, and old and fat and ugly, almost as ugly as Mr. Harding.

He lived with his mother at Harding’s Rest at the top of the hill. It had been built by his grandfather with sugar money, Ma said, and there was a lake in the garden with swans on it, and a grove of fruit trees as well. She loved words like “lake” and “grove” for anything the Hardings had, but I’d seen the garden through a gap in the hedge, and there wasn’t a lake there at all, just a pond with a flock of hadedahs pecking around it. There wasn’t a grove either. It was a measly stand of mango trees, with monkeys screaming out of them, and mangos rotting on the ground.

Ma had been up to Harding’s Rest only once, during the war. A troopship had stopped in South Africa on its way to Suez, and old Mrs. Harding had gone down to the docks herself to invite the soldiers up to the house for a party — never mind officers only, never mind four men to one woman for a change. The Hardings were old school, Ma said, a dying breed that didn’t stay home playing golf when the world was in a crisis. They mucked in, gave parties for men going off to die. The men themselves had toiled up the hill in rickshaws, or just trudged all the way on foot. And such laughter there’d been! Such dancing in the moonlight! Such a supper laid out in the grand hall!

But then Mr. Harding had come down in his ball of fire, and his older brother ran off to the war and got himself killed. And so that was that for parties, and also for old Mrs. Harding’s sanity, because why had she bothered to have sons in the first place if they were just going to be burned up and shot down? By the time Mr. Harding came home in his hat and veil, she’d taken to running out into the road with the silver, giving it to any old native who happened to be passing by. One day, she gave Phineas two forks and a serving spoon, and he brought them straight home to Ma. So up she went to give them back. But the housekeeper who answered the door was barely civil, just snatched them back as if Ma had stolen them herself.

And it wasn’t until Mr. Harding rang the doorbell months and months later that Ma realised how old school the Hardings really were. He’d just heard what had happened to my father, he said — they’d been trying to keep him from unfortunate things, which was rather unforgivable under the circumstances, but thank you for bringing the cutlery back, and if there was anything he could do, she need only ask, and so forth.

My father had known the Hardings before he’d even met Ma. They’d all been at Cambridge together, and when they’d come back they’d played golf at the Royal Country Club. My father had only been asked to join in the first place, Ma said, because he was the better sort of Jew. And from the ...

"The Servant's Quarters is Lynn Freed's best novel yet. Cressida, a young girl who watches those around her patch up their wounds from the war and carry on with the weight of pretense, is as observant and as wickedly truthful as any Jane Austen character." --Amy Tan 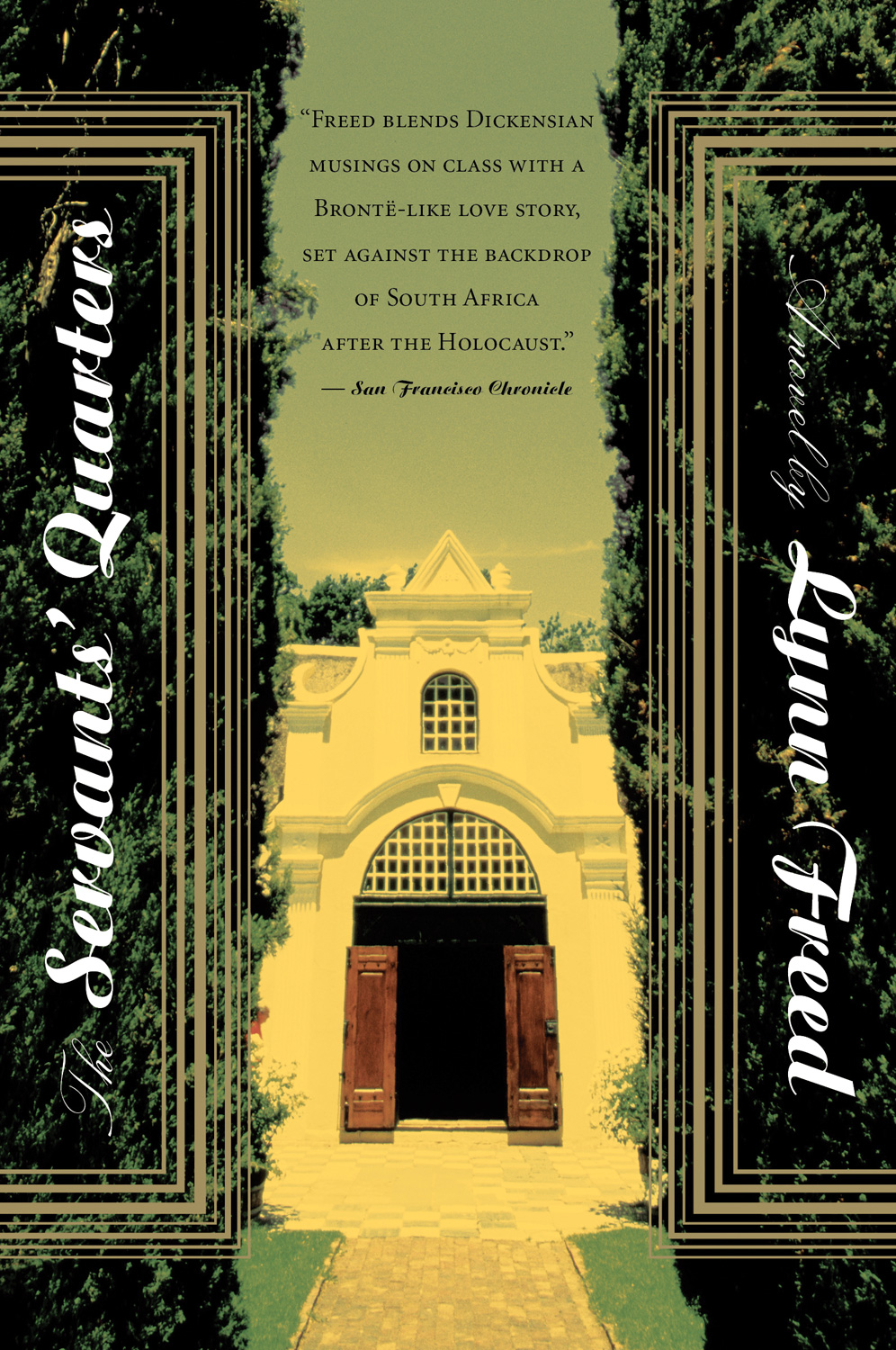