By the 2002 Newbery Medal winner! In 1925, a fourteen-year-old girl secretly takes over as teacher when her one-room schoolhouse in remote Colorado is closed.

More than anything, Ida Bidson wants to become a teacher. To do that, she must finish eighth grade, then go on to high school. But her dream falters when the one-room school in her remote Colorado town shuts down. Her only hope is to keep the school open without anyone finding out. Yet even a secret school needs a teacher. Ida can't be it. . . . Or can she?
In the spirit of The True Confessions of Charlotte Doyle, Newbery Medal winner Avi creates an inspiring story of a headstrong girl determined to control her own destiny.

About the author
Avi

AVI has written many acclaimed novels for middle grade and teen readers, including his Newbery Medal-winning Crispin: The Cross of Lead and his two Newbery Honor books, Nothing But the Truth: A Documentary Novel and The True Confessions of Charlotte Doyle. He lives in Denver, Colorado.

MARLA FRAZEE has illustrated many acclaimed picture books, some of which she also wrote. Her picture book A Couple of Boys Have the Best Week Ever was named a Caldecott Honor Book. She is also the author and illustrator of Walk On! A Guide for Babies of All Ages; Santa Claus, the World's Number One Toy Expert; Roller Coaster; and Hush, Little Baby. She is the illustrator of Everywhere Babies by Susan Meyers, The Seven Silly Eaters by Mary Ann Hoberman, Harriet, You'll Drive Me Wild by Mem Fox, and more. Marla Frazee lives in Pasadena, California. Visit her website at www.marlafrazee.com.

"Brake and clutch!" she shouted.

Ida, only four-feet-eleven and unable to reach the floor of the car, knelt on the torn seat and gripped the steering wheel tightly. Her seven-year-old brother, Felix, hunched on the floor before her and used his hands to push the brake and clutch pedals down.

As Ida adjusted the throttle lever, the battered car, hiccuping like a damp firecracker, swung into a sharp turn. "Less brake!" Ida called.

"Where we at?" Felix called up as he leaned onto the right pedal.

"It's 'Where are we?'" his older sister corrected.

"You're not my teacher! Just tell me!"

The car bumped along, causing the old tin syrup can filled with their lunch to bounce on the seat beside Ida. Behind them, dust twirled out like an unraveling rope, momentarily hiding the high ring of snowcapped mountains that surrounded the valley.

Seeing him, Ida grinned, reached over the door-the car had no windows-and squeezed

the horn bulb attached to the outside of the car. Honnnk! Honnnk!

At the loud gooselike sound, Ruckus gave a little buck. Though startled, Tom skillfully reined the mule to the side of the road, then turned around and pushed his floppy flaxen hair out of his eyes. Seeing Ida's slow-moving car, he smiled and yelled, "Get yourself a mule!"

"Join the twentieth century!" she shouted back.

"Who's there?" Felix called from the floor.

The car finally rounded the last bend, bringing Elk Valley's schoolhouse into view. The building stood in the middle of its own small north-south valley, through which the dirt road ran. To the east low hills gave way to higher ground, woods, and mountains. West it was much the same. Squat and square, the school building had a pitched roof and a small bell steeple at the south end. The painted but peeling white clapboard walls had three windows on each side. Beyond the school stood two privies, one for boys and one for girls. To the south was a small shallow pond. In front of the school stood a flagpole not far from a water pump as well as a lopsided teeter-totter.

"Clutch to neutral and brake!" Ida shouted as she aimed the car toward its regular parking place, only to realize that another car-one she didn't recognize-was already there.

"Hold on!" Ida screamed. With all her strength, she turned the wheel hard about, then yelled, "Brake!" as she grabbed the hand lever and pulled back.

Barely avoiding a crash, the old Ford came to a lurching halt next to the other car. Its motor gave one more enormous backfire, sputtered, chuffed twice, then died with a shuddering sigh.

"Another car was parked in our spot. I almost

Ida tightened the brake, then untied the rope that held the side door shut. With a squeak it swung open. "Out you go!" she called.

Felix, crawling headfirst, slipped down to the ground.

"I hate this," he complained as he stretched his arms and legs.

"Beats walking five miles both ways," Ida said as she got out and looked toward the school. She brushed the dust from her braided brown hair and checked to see if her blue ribbons were still tied tightly. Then she smoothed down her gingham dress. Of all the dresses her mother had made for her, this was her favorite.

Herbert Bixler, Charley and Susie Spool, and Natasha Golobin were seated on the school's front porch. As Ida and Felix approached, they all looked up.

"And he's already tried to tie my shoelaces together," Susie complained.

Herbert lifted one of his bare feet and wiggled his toes. "Guess I don't know much about how shoes work," he said.

Ida ignored him. "Whose car is that?" she asked.

Natasha, who was a year younger than Ida, replied, "Mr. Jordan's."

Mr. Jordan was the owner-operator of Wally's Mighty Fine Emporium, Elk Valley's feed and grocery store. He was also head of the school board.

"Guess he can park anywhere he wants," Ida acknowledged. "How come he's here?"

"Inside," Charley assured them. Charley and Susie, who lived just over the hill, were always the first to get to school.

"What's Mr. Jordan's car doing here?" Tom called as he slid off Ruckus, then helped his sister down. "He come for inspection?" As always, Tom tied the mule to the rear bumper of the Bidsons' car with enough rope to allow for grazing.

"No one knows," Ida replied.

Just then the schoolhouse door opened and Miss Fletcher appeared. A slight, middle-aged woman with dark hair piled atop her head, she was dressed in a simple blue cotton dress.

"What's that supposed to mean?" Herbert muttered as soon as Miss Fletcher went back in.

Felix said, "She didn't even say her regular 'Good morning.'"

"Guess we better get ourselves in and see," Tom said, always the logical one.

Without another word, the children climbed up the porch stairs and filed inside.

The school had but one room. Built entirely of wood from the nearby Columbine lumber mill, the building was twenty years old. Most of the room was filled with ancient low benches and long student desks etched with countless initials. The desks were older than the school building. To the right of the front door was the boys' wardrobe. On the other side was the girls'. Miss Fletcher's desk stood on the left, close to a small wall-mounted blackboard, which at the moment was perfectly clean.

An aspen switch-for discipline-hung alongside the board. Next to that was the school's library, a small bookcase containing some fifteen tattered books plus a few old magazines.

A round, iron wood-burning stove stood to the right, opposite the teacher's desk. Kerosene lamps were fastened on each wall along with pictures of George Washington and Abraham Lincoln, and a chart of the Palmer script alphabet. There were also pull-down maps of Colorado, the United States, and the rest of the world.

As Miss Fletcher stood by the door, the eight students put away their lunch pails and their coats, then took their regular seats at their desks.

Felix and Mary, who were first and second graders, sat up front. Ida and Tom, the only eighth graders, took their places in the back row. Ida, being short, fit easily. Tom, tall and skinny, had to stretch out to get his knees to fit. The other four children-fourth through seventh graders-were scattered about on the other benches.

Mr. Jordan was standing in a corner going through Miss Fletcher's school account book. He was a portly, red-faced man, wearing overalls and a blue shirt. He had left his straw hat on the teacher's desk, something the children would never be allowed to do.

Ida, using a trick she had mastered long ago, faced front but whispered to Tom without moving her lips.... 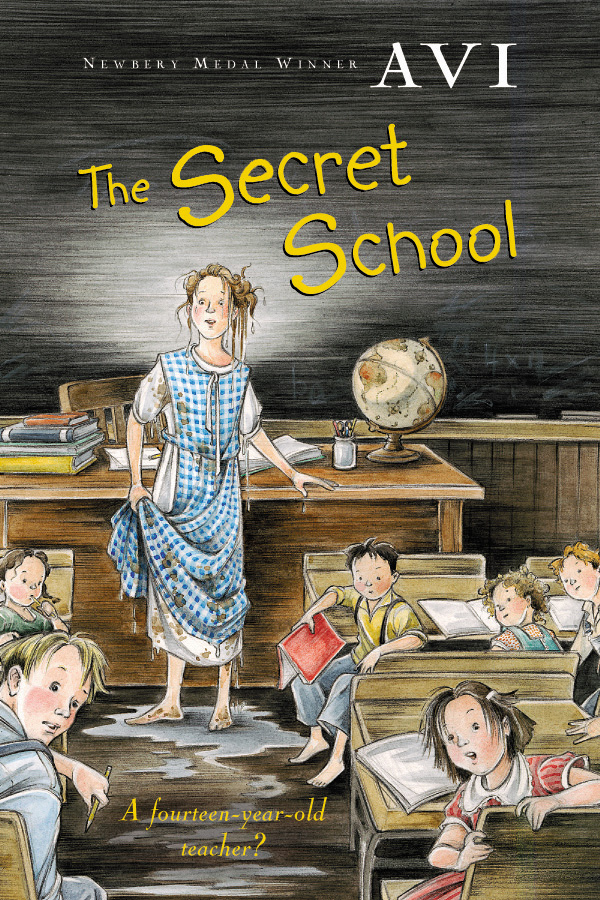