In this action-packed fantastically-imagined thriller, fifteen-year-old Will Drake has made a career of breaking out from high-security prisons. His talents have landed him at the Rig, a specialist juvenile holding facility in the middle of the Arctic Ocean. No one can escape from the Rig. But Will Drake likes a challenge . . .

Fifteen-year-old Will Drake has made a career of breaking out from high-security prisons. His talents have landed him at the Rig, a special juvenile holding facility in the middle of the Arctic Ocean. No one can escape from the Rig. After hatching some escape plans—and making the first real friends of his life—Drake quickly realizes that all is not as it seems on the Rig. The warden is obsessed with the mysterious Crystal-X, a blue glowing substance that appears to give superpowers to the teens exposed to it. Drake, Tristan, and Irene are banking on a bid for freedom—but can they survive long enough to make it?

About the author
Joe Ducie

The Sikorsky SH-60 Seahawk flew low over the ocean, low enough that a cool mist splashed William Drake in the face through the open bay doors. He could taste salt on his lips and feel the roaring wind rush past his ears.

Handcuffed to a steel pivot loop attached to the floor of the chopper, Drake glared out at the miles of endless ocean. He had lost sight of the mainland nearly an hour ago, after takeoff from the holding center in St. John’s harbor—the very edge of Newfoundland and Labrador on the North American continent. Nothing but dark, deep waters stretched over the horizon. The sky was bruised purple, heading toward nightfall.

It was cold aboard the chopper, but Drake refused to let his jailers see him shake. Also onboard were two armed guards, both wearing sealed gas masks and carrying sleek semiautomatic rifles. They sat, menacing and silent, by the cockpit doors, their eyes unseen behind tinted plastic. Drake was bound at the ankles and tied to a group of six other prisoners. Four girls and two boys, all about his age.

He had lost track of the days while on the run, but he knew that his fifteenth birthday had been in the last week or so. There was a good chance he was the youngest prisoner aboard, but that didn’t make him the weakest.

Not by a long shot.

Strands of strawberry-blond hair hid one girl’s face. She had started crying five minutes into the flight and hadn’t stopped since. None of the others had tried to comfort her. A stocky boy on Drake’s left, who had spiked purple hair—Drake tagged him as Mohawk—sneered at the girl. Drake knew little about where they were going, as the Rig was shrouded in secrecy, but he knew enough not to cry.

“Five miles out,” a voice clouded in static transmitted into the cabin.

Drake turned his gaze back out to sea, scanning the horizon for their destination. He spotted it in the distance, rising out of the water like some dilapidated demon of steel and smoke.

An old oil platform that had been converted into the world’s first floating rehabilitation center. The Rig was actually five platforms, one at each point of the compass, connected by networks of metal walkways and orange pipes, and a final platform in the middle of the structure. From the air, the Rig was shaped almost like a diamond.

He watched the Rig grow larger from his seat on the side of the chopper. In the vast and murky ocean, it was the only man-made structure. For all that it mattered this far out to sea, the Rig could have been the only dry land left in the world.

The chopper landed on the southern platform on a wide helipad marked with yellow paint. The shackles were unlocked from the chopper’s floor, and Drake was offloaded along with his fellow prisoners. More faceless guardsmen met them here.

With a hard shove from a guard, Drake stumbled forward, shuffling in his ankle cuffs. The seven of them were lined up along the edge of the helipad. They stood shivering and alone as the Seahawk was quickly refueled by a ground crew and took off, on its way back to St. John’s.

A large man dressed in a fine suit—too fine for this place, Drake thought—waddled up to them, his thumbs hooked into the loopholes of his pants and a smirk on his face. His tie was tucked into his belt, and his neck jiggled as he spoke.

“Good evening, ladies and gentlemen,” he said, smiling at each of them in turn. “My name is Jonathan Rayland Storm. You may call me Warden Storm. Let me be the first to welcome you to the Rig.” His gaze settled on Drake last of all, and he did not look away. The warden’s smile turned into something nasty as they stared at each other.

“You must be my special case,” he said, inclining an invisible hat. “Well, you ain’t so special here, son. A few days of work in Tubes will see to that.” He opened his arms and gestured to the group at large. “We live by rules here on my five platforms. As you can see, there is no escape. Nothing around you for a hundred miles but freezing water infested with some of the meanest sharks to ever grace God’s green earth.”

He dabbed at his brow with a cream-colored handkerchief.

“Only you won’t find any of that earth around here, no matter how hard you look. So you will follow my rules. You will call me Sir or Warden Storm,” he said, repeating himself. “You will address all the guards as Officer.

“Alliance Systems, among other exciting ventures, provides the finest custodial services in the world, as some of you already know.” The warden chortled. “Ten years ago, in 2015, after the eastern platform you see just over there was decommissioned, the Alliance built the rest of this place, and since then it has become the foremost center for violent offender rehabilitation on the planet. You are lucky to be here.”

Drake tried hard to suppress a smirk at that and failed.

“If you’ve been sent to me, to my Rig, you are all criminals, no matter your age, and have been sentenced to no less than five years of rehabilitative incarceration by your respective national governments. This old girl is your home for the next half decade, if not more. You will hate it here. You will hate me. That’s just fine. Keep your head down, do your work, and once your time is up, we will send you home as a productive member of society.”

As the warden finished his introduction, Drake ran his eyes across the visible structure of the oil rig. He counted three guards behind Storm, plus the two from the helicopter. There was a shadowy figure stationed up in the command tower. Call that another prison officer.

That made at least six unique guards, all faceless and armed with automatic weapons and nasty-looking black batons. There’ll be more, Drake thought, licking the salt from his lips.

Drake had known men like Warden Storm before. Men who sat in seats of power and absolute authority. Men who controlled everything about their private worlds. The faces of the men often changed, but in Drake’s experience, they were always the same in one regard.

So Drake believed the warden when he spoke of shark-infested waters and the rules by which the prisoners were supposed to abide. He believed it as much as the man himself did. But his overconfidence, his arrogance made him overlook one key factor. One small yet important detail.

There is no escape, Warden Jonathan Rayland Storm had said, and it was there that he and Drake would have to disagree.

Because there wasn’t a prison built—on God’s green earth or otherwise—that could hold Will Drake.

After the warden’s speech, Drake and his chain gang were marched single file across the helipad and into the Rig, led down a gray corridor by four of the masked guards. Every two meters or so, a window lo...

"Ducie skillfully builds tension and smears it with a liberal coat of blood and grime. Will's lurking suspicion that the Rig is hiding something leads to a supernatural reveal that will please dystopia and sci-fi lovers, ramping up the story's danger an excitement."

"All the elements of a great thriller are here—sinister villains, a stoic hero with a heart of gold, even mutated sharks...A solid genre outing."

"Full of suspense, action and foreshadowing...Readers will ponder issues of human behaviors and the motivations behind them...they will not want to put this book down." 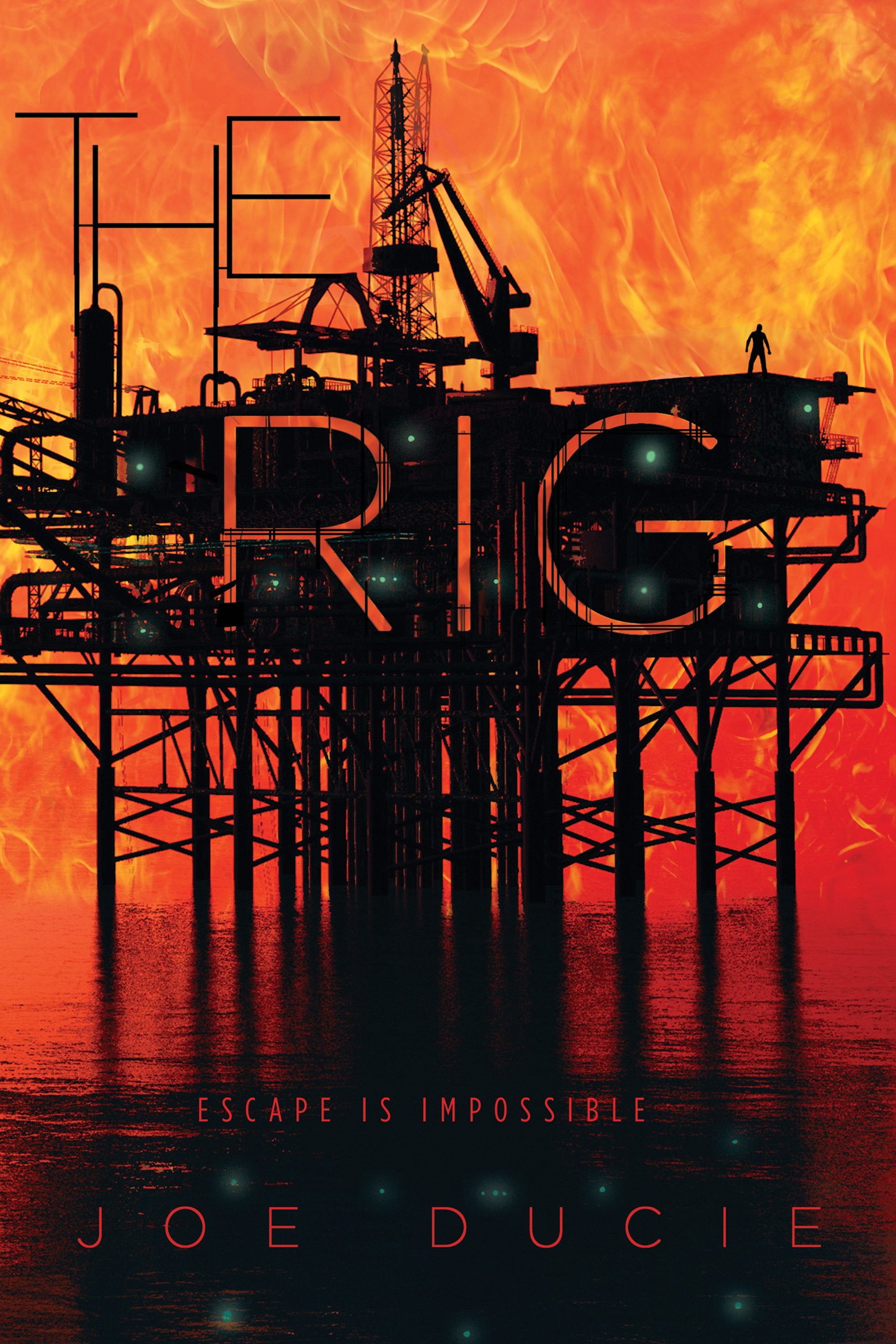