The elegant and compelling novel about a Pakistani man’s abandonment of his high-flying life in New York??—??an extraordinary portrait of a divided and yet ultimately indivisible world in America post-9/11.

SHORT-LISTED FOR THE MAN BOOKER PRIZE

OVER ONE MILLION COPIES SOLD WORLDWIDE

The elegant and compelling novel about a Pakistani man’s abandonment of his high-flying life in New York—an extraordinary portrait of a divided and yet ultimately indivisible world in America post-9/11.

At a café table in Lahore, a bearded Pakistani man converses with an uneasy American stranger. He begins to tell the story of a man named Changez, who is living an immigrant’s dream of America. At the top of his class at Princeton, he is snapped up by an elite valuation firm. He thrives on the energy of New York, and his budding romance with elegant, beautiful Erica promises entry into Manhattan society at the same exalted level once occupied by his own family back in Lahore. But in the wake of September 11, Changez finds his position in his adopted city suddenly overturned, and his relationship with Erica shifting. And Changez’s own identity is in seismic shift as well, unearthing allegiances more fundamental than money, power, and maybe even love.

About the author
Mohsin Hamid

MOHSIN HAMID is the author of three novels. His latest novel, Exit West, has been short-listed for the 2017 Man Booker Prize. Moth Smoke, his first novel, was a Betty Trask Award winner, PEN/ Hemingway Award finalist, and New York Times Notable Book of the Year. His second, The Reluctant Fundamentalist, a bestseller in the United States and abroad, was also short-listed for the Man Booker Prize. Hamid's writing has appeared in Time, the New York Times, and other publications.

EXCUSE ME, SIR, but may I be of assistance? Ah, I see I have alarmed you. Do not be frightened by my beard: I am a lover of America. I noticed that you were looking for something; more than looking, in fact you seemed to be on a mission, and since I am both a native of this city and a speaker of your language, I thought I might offer you my services.

How did I know you were American? No, not by the color of your skin; we have a range of complexions in this country, and yours occurs often among the people of our northwest frontier. Nor was it your dress that gave you away; a European tourist could as easily have purchased in Des Moines your suit, with its single vent, and your button-down shirt. True, your hair, short-cropped, and your expansive chest—the chest, I would say, of a man who bench-presses regularly, and maxes out well above two-twenty-five—are typical of a certain type of American; but then again, sportsmen and soldiers of all nationalities tend to look alike. Instead, it was your bearing that allowed me to identify you, and I do not mean that as an insult, for I see your face has hardened, but merely as an observation.

Come, tell me, what were you looking for? Surely, at this time of day, only one thing could have brought you to the district of Old Anarkali—named, as you may be aware, after a courtesan immured for loving a prince—and that is the quest for the perfect cup of tea. Have I guessed correctly? Then allow me, sir, to suggest my favorite among these many establishments. Yes, this is the one. Its metal chairs are no better upholstered, its wooden tables are equally rough, and it is, like the others, open to the sky. But the quality of its tea, I assure you, is unparalleled.

You prefer that seat, with your back so close to the wall? Very well, although you will benefit less from the intermittent breeze, which, when it does blow, makes these warm afternoons more pleasant. And will you not remove your jacket? So formal! Now that is not typical of Americans, at least not in my experience. And my experience is substantial: I spent four and a half years in your country. Where? I worked in New York, and before that attended college in New Jersey. Yes, you are right: it was Princeton! Quite a guess, I must say.

What did I think of Princeton? Well, the answer to that question requires a story. When I first arrived, I looked around me at the Gothic buildings—younger, I later learned, than many of the mosques of this city, but made through acid treatment and ingenious stonemasonry to look older—and thought, This is a dream come true. Princeton inspired in me the feeling that my life was a film in which I was the star and everything was possible. I have access to this beautiful campus, I thought, to professors who are titans in their fields and fellow students who are philosopher-kings in the making.

I was, I must admit, overly generous in my initial assumptions about the standard of the student body. They were almost all intelligent, and many were brilliant, but whereas I was one of only two Pakistanis in my entering class—two from a population of over a hundred million souls, mind you—the Americans faced much less daunting odds in the selection process. A thousand of your compatriots were enrolled, five hundred times as many, even though your country’s population was only twice that of mine. As a result, the non-Americans among us tended on average to do better than the Americans, and in my case I reached my senior year without having received a single B.

Looking back now, I see the power of that system, pragmatic and effective, like so much else in America. We international students were sourced from around the globe, sifted not only by well-honed standardized tests but by painstakingly customized evaluations—interviews, essays, recommendations—until the best and the brightest of us had been identified. I myself had among the top exam results in Pakistan and was besides a soccer player good enough to compete on the varsity team, which I did until I damaged my knee in my sophomore year. Students like me were given visas and scholarships, complete financial aid, mind you, and invited into the ranks of the meritocracy. In return, we were expected to contribute our talents to your society, the society we were joining. And for the most part, we were happy to do so. I certainly was, at least at first.

Every fall, Princeton raised her skirt for the corporate recruiters who came onto campus and—as you say in America—showed them some skin. The skin Princeton showed was good skin, of course—young, eloquent, and clever as can be—but even among all that skin, I knew in my senior year that I was something special. I was a perfect breast, if you will—tan, succulent, seemingly defiant of gravity—and I was confident of getting any job I wanted.

Except one: Underwood Samson & Company. You have not heard of them? They were a valuation firm. They told their clients how much businesses were worth, and they did so, it was said, with a precision that was uncanny. They were small—a boutique, really, employing a bare minimum of people—and they paid well, offering the fresh graduate a base salary of over eighty thousand dollars. But more importantly, they gave one a robust set of skills and an exalted brand name, so exalted, in fact, that after two or three years there as an analyst, one was virtually guaranteed admission to Harvard Business School. Because of this, over a hundred members of the Princeton Class of 2001 sent their grades and résumés to Underwood Samson. Eight were selected—not for jobs, I should make clear, but for interviews—and one of them was me.

You seem worried. Do not be; this burly fellow is merely our waiter, and there is no need to reach under your jacket, I assume to grasp your wallet, as we will pay him later, when we are done. Would you prefer regular tea, with milk and sugar, or green tea, or perhaps their more fragrant specialty, Kashmiri tea? Excellent choice. I will have the same, and perhaps a plate of jalebis as well. There. He has gone. I must admit, he is a rather intimidating chap. But irreproachably polite: you would have been surprised by the sweetness of his speech, if only you understood Urdu. Where were we? Ah yes, Underwood Samson. On the day of my interview, I was uncharacteristically nervous. They had sent a single interviewer, and he received us in a room at the Nassau Inn, an ordinary room, mind you, not a suite; they knew we were sufficiently impressed already. When my turn came, I entered and found a man physically not unlike yourself; he, too, had the look of a seasoned army officer. “Changez?” he said, and I nodded, for that is indeed my name. “Come on in and take a seat.” His name was Jim, he told me, and I had precisely fifty minutes to convince him to offer me a job. “Sell yourself,” he said. “What makes you special?” I began with my transcript, pointing out that I was on track to graduate summa cum laude, that I had, as I have mentioned, yet to receive a single B. “I’m sure you’re smart,” he said, “but none of the people I’m talking to today has any Bs.” This, for me, was an unsettling revelation. I told him that I was tenacious, that after injuring my knee I had made it through physiotherapy in half the time the doctors expected, and while I could no longer play varsity soccer, I could once again run a mile in less than six minutes. “That’s good,” he said, and for the first time it seemed to me I had made something of an impression on him, when he added, “but what else?”

I fell silent. I am, as you can see, normally quite happy to chat, but in that moment I did not know what to say. I watched him watch me, trying to understand what he was looking for. He glanced down at my résumé, which was lying between us on the table, and then back up again. His eyes were cold, a pale blue, and judgmental,

PRAISE FOR THE RELUCTANT FUNDAMENTALIST

“Elegant and chilling . . . his tale [has] an Arabian Nights–style urgency: the end of the story may mean the death of the teller.”—The New York Times Book Review

“Slender, smart, and subversive.”—Entertainment Weekly“Changez’s voice is extraordinary. Cultivated, restrained, yet also barbed and passionate, it evokes the power of butler Stevens in Kazuo Ishiguro’s The Remains of the Day.”—The Seattle Times “A searing and powerful account of a Pakistani in New York after 9/11.”—Mira Nair, director of The Namesake
We’re sorry 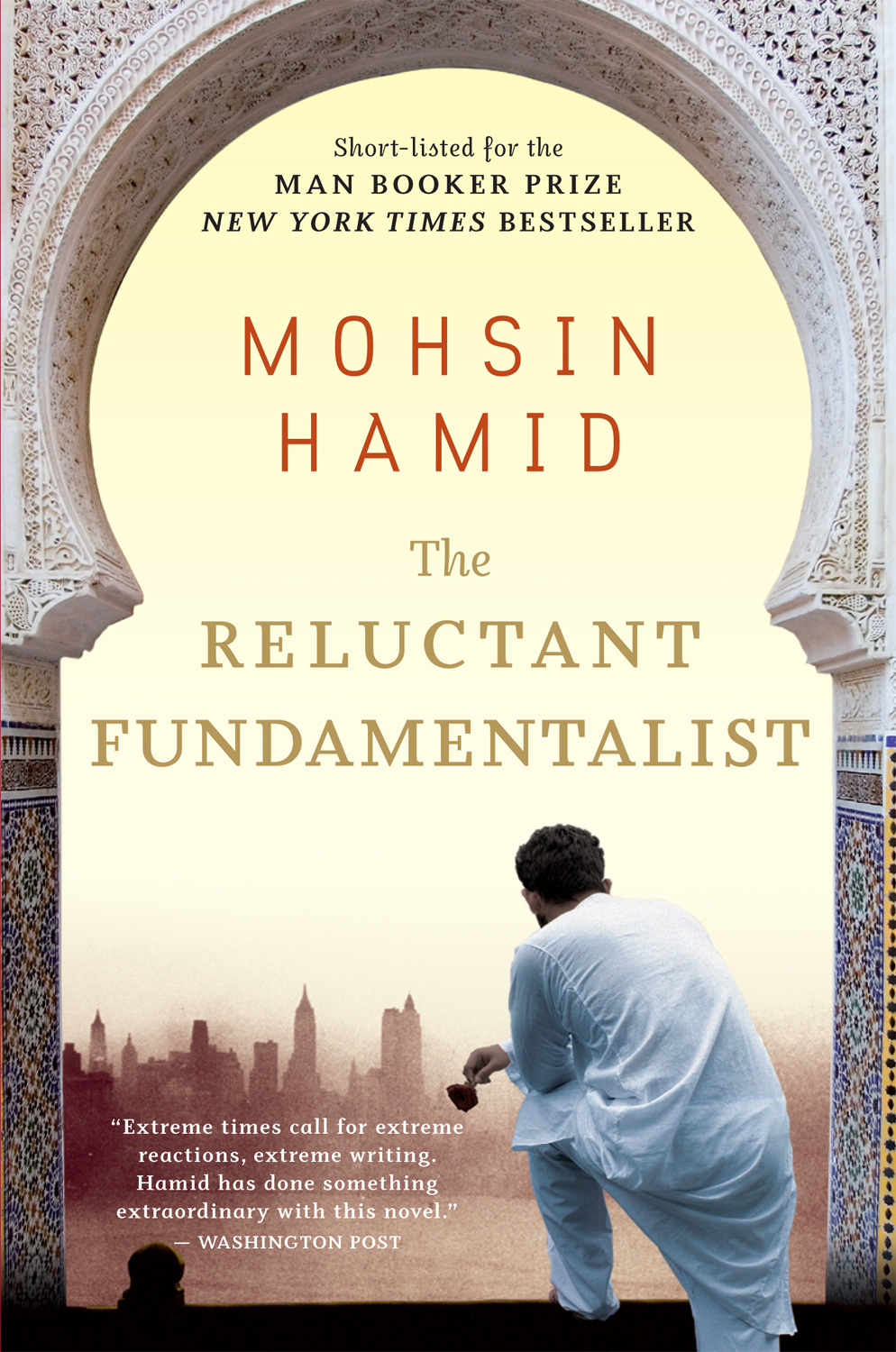