Think vampires are romantic, sexy, and powerful? Think again. Vampires are dead. And unless they want to end up staked, they have to give up fanging people, admit their addiction, join a support group, and reform themselves.
Nina Harrison, fanged at fifteen and still living with her mother, hates the Reformed Vampire Support Group meetings every Tuesday night. Even if she does appreciate Dave, who was in a punk band when he was alive, nothing exciting ever happens. That is, until one of group members is mysteriously destroyed by a silver bullet. With Nina (determined to prove that vamps aren't useless or weak) and Dave (secretly in love with Nina) at the helm, the misfit vampires soon band together to track down the hunter, save a werewolf, and keep the world safe from the likes of themselves.
The perfect anecdote to slick vampire novels, this murder-mystery comedy of errors will thrill fans of Evil Genius.

Think vampires are romantic, sexy, and powerful? Think again. Vampires are dead. And unless they want to end up staked, they have to give up fanging people, admit their addiction, join a support group, and reform themselves.
Nina Harrison, fanged at fifteen and still living with her mother, hates the Reformed Vampire Support Group meetings every Tuesday night. Even if she does appreciate Dave, who was in a punk band when he was alive, nothing exciting ever happens. That is, until one of group members is mysteriously destroyed by a silver bullet. With Nina (determined to prove that vamps aren't useless or weak) and Dave (secretly in love with Nina) at the helm, the misfit vampires soon band together to track down the hunter, save a werewolf, and keep the world safe from the likes of themselves.
The perfect anecdote to slick vampire novels, this murder-mystery comedy of errors will thrill fans of Evil Genius.

Catherine Jinks grew up in Papua New Guinea and now resides in the Blue Mountains of New South Wales, Australia. She is a three-time winner of the Children's Book Council of Australia Book of the Year award, and in 2001 was presented with a Centenary Medal for her contribution to Australian Children's Literature. Her popular works for young readers include the Evil Genius series, The Reformed Vampire Support Group, and the How to Catch a Bogle trilogy. Visit her website at www.catherinejinks.com.

Nina was stuck. She didn’t know what to write next.

So far, her teenage love interest had been dragged into a refrigerated meat locker by two thugs armed with a gun and a boning knife. But Zadia Bloodstone was already waiting for them. Hanging upside-down from a meat hook, wrapped in a long black cape and covered by a thin layer of frost, Zadia had cleverly disguised herself as a harmless side of beef. Only when she’d spread her arms wide had the crackle of breaking ice announced her presence.

Bang-bang! Two bullets had promptly smashed into her rib cage. But Zadia wasn’t troubled by bullets, because her vital organs could regenerate themselves at lightning speed. Somersaulting to the floor, she’d walked straight up to the bigger thug and kicked the gun from his hand. Then she’d whirled around to fight off his friend. Within seconds, the two baddies had been knocked out—leaving a very important question unanswered.

What would the rescued boy do?

Obviously, he would be grateful. He might even be dazzled by Zadia’s flawless face and perfect figure. But if he saw her sink her fangs into anyone’s neck, he would also be frightened. He would realize instantly that she was a vampire and run for the door.

He would be unaware, at this point, that Zadia was a heroic crime-fighting vampire who preyed only on lowlife scum.

Nina chewed away at a lock of her hair, thinking hard. She was in the middle of chapter eight. The room in which she sat was illumined solely by the glow of her computer screen; barely visible in the dimness were her brass bedstead, her Indian cushions, and her lava lamp. A poster of David Bowie hung on the wall, curling at the corners. A small bookshelf contained multiple copies of Youngblood (book two of the Bloodstone Chronicles), by someone called N. E. Harris.

Splashed across the cover of Youngblood was a glamorous, slinky young girl with white skin, black hair, and ruby-red lips. She wore high-heeled boots and lots of black leather, as well as an ammunition belt. Her canine teeth were long and pointed, but she was stunningly beautiful nonetheless.

She appeared to be leaping from rooftop to rooftop, her black cape streaming out behind her.

"Nina!" somebody shouted from beyond the closed bedroom door. Nina didn’t respond. She stared unblinkingly at the computer screen, still gnawing at her hair—which was thick and dark, and cut in a heavy, clumsy, old-fashioned style that didn’t suit her bony little face.

It was about time, she decided, that Zadia made friends with the boy she’d rescued.

Zadia hesitated, Nina wrote, torn between her desire to punish the wicked and her need to reassure the tall, pale, handsome teenager with the big brown eyes.

"Nina!" a distant voice called again. Ignoring it, Nina deleted the word pale. Her hands on the keyboard were like chickens’ feet, all scaly and dry. Her skin was the color of a maggot’s, and her legs were so thin that her tights were wrinkled around the knees.

Her boots had flat heels on them.

"Nina!" The door burst open to admit a withered old woman in a quilted nylon dressing gown. "For God’s sake, are you deaf ? Father Ramon’s outside—you want to keep him waiting?"

"Aren’t you feeling well?" the old woman wanted to know. She had the hoarse rasp and yellowed fingertips of a chronic smoker, her hair looked like a frayed clump of steel wool, and her scarlet lipstick was bleeding into the cracks around her mouth. "Because if you’re sick," she said, "you shouldn’t be going."

"That’s what you always say, and you never are. Is your head giving you trouble?"

"What about your stomach?"

Nina didn’t reply. Instead she rose, reaching for her sunglasses—which shared the cluttered surface of her desk with a Pet Rock, a pile of vintage vampire comics, and a volleyball trophy awarded to the "Junior Regional Interschool Champions" of 1971. Pinned on a notice board hanging above the desk lamp were various faded photographs of laughing teenage girls.

If any of these girls was Nina, it wasn’t immediately apparent. They were so sleek and glossy and bright-eyed that they could have belonged to an entirely different species.

"Are you nauseous?" her mother nagged. "You are, aren’t you?"

"There’s nothing wrong," said Nina on her way out of the room. It was a lie of course. There was always something wrong.

And her mother knew it.

"If you get sick, I want you to come straight home," the old woman advised as they descended a narrow wooden staircase together. "Dave won’t mind bringing you back early, if you can’t stay to the end. And don’t leave it till the last minute, the way you did before. Dave won’t want you throwing up all over his sheepskin seat covers again . . ."

Nina winced. It was true. She had ruined Dave’s precious seat covers. Was it any wonder that he didn’t exactly beat a path to her door? Was it any wonder that she spent so much of her time in imaginary meat lockers with the stylish and vigorous Zadia Bloodstone? At least there were no uncontrollable bouts of vomiting in Zadia’s world.

Nina pulled open the heavy front door of her mother’s row house. Outside, the darkness was relieved only by the soft glow of a nearby street lamp; stars were scattered like sequins across a coal-black sky. Yet Nina had already donned her sunglasses, which were big, heavy, wraparound things that made her pinched face look smaller than ever . . .

You know what? This isn’t going to work. I can’t write about myself the way I write about Zadia. It’s too weird. It’s confusing. Next thing I’ll get mixed up and start making me do things that I can’t actually do. Like turn into a bat, for instance. Zadia can do that, but I can’t. No one can.

The plain fact is, I can’t do anything much. That’s part of the problem. Vampires are meant to be so glamorous and powerful, but I’m here to inform you that being a vampire is nothing like that. Not one bit. On the contrary, it’s like being stuck indoors with the flu watching daytime television, forever and ever.

If being a vampire were easy, there wouldn’t have to be a Reformed Vampire Support Group.

As a matter of fact, I was going to a group meeting that very night. Father Ramon had come to pick me up. It was a Tuesday, because all our meetings are held on Tuesdays, at nine thirty p.m., in St. Agatha’s church hall. And in case you’re wondering why I couldn’t have driven myself to St. Agatha’s . . . well, that’s just one of my many problems. I still look fifteen, you see. I still am fifteen, when all’s said and done, since I stopped aging back in 1973, when I was infected. So I’d attract far too much attention behind a steering wheel. (Besides which, Mum doesn’t have a car.)

As for the public transport option, Sanford Plackett has ruled that out. He’s...

"Jinks’s signature facility with plot and character development is intact as she turns to the topic of vampires . . . Throwing in delicious details and aperçus, the author works her way from the murder of one of the vampires to suspense and adventure of the sinister yet daffy variety beloved by readers of Evil Genius. The plot twists, more ornate than in previous works, ramp up the giddiness—and, perhaps, camouflage the corpses, blood and other byproducts of the genre."  —Publishers Weekly, starred review

"Support Group is truly like no other vampire story. It is witty, cunning, and humorous, with numerous plot twists and turns. Jinks has conjured up an eccentric but believable cast of characters in a story full of action and adventure."  —School Library Journal

"Jinks's quirky sense of humor will appeal to fans of her Evil Genius series. Those tired of torrid bloodsucker stories or looking for a comic riff on the trend will feel refreshed by the vomitous, guinea-pig-drinking accidental heroics of Nina and her pals."  —Kirkus Reviews

"Jinks draws her characters and their unique challenges in great detail . . . there’s plenty of blood and guts (both types) to go around. One part problem novel, one part comedy, and one part murder-mystery, this alternative vampire story is for outsiders of all kinds, underground or otherwise." —Horn Book

“Jinks takes readers on a wild ride, poking wicked fun at vampire enthusiasts of all stripes with her wryly clinical take . . . a first-rate comedy with equal appeal for avid vampire fans and those who wouldn’t be caught dead with a copy of Twilight.”  —The Bulletin

"With this budding heroine in her own right at the forefront, this ensemble of eccentric characters gives a wry spin to the ever-popular vampire tales."  —BookPage 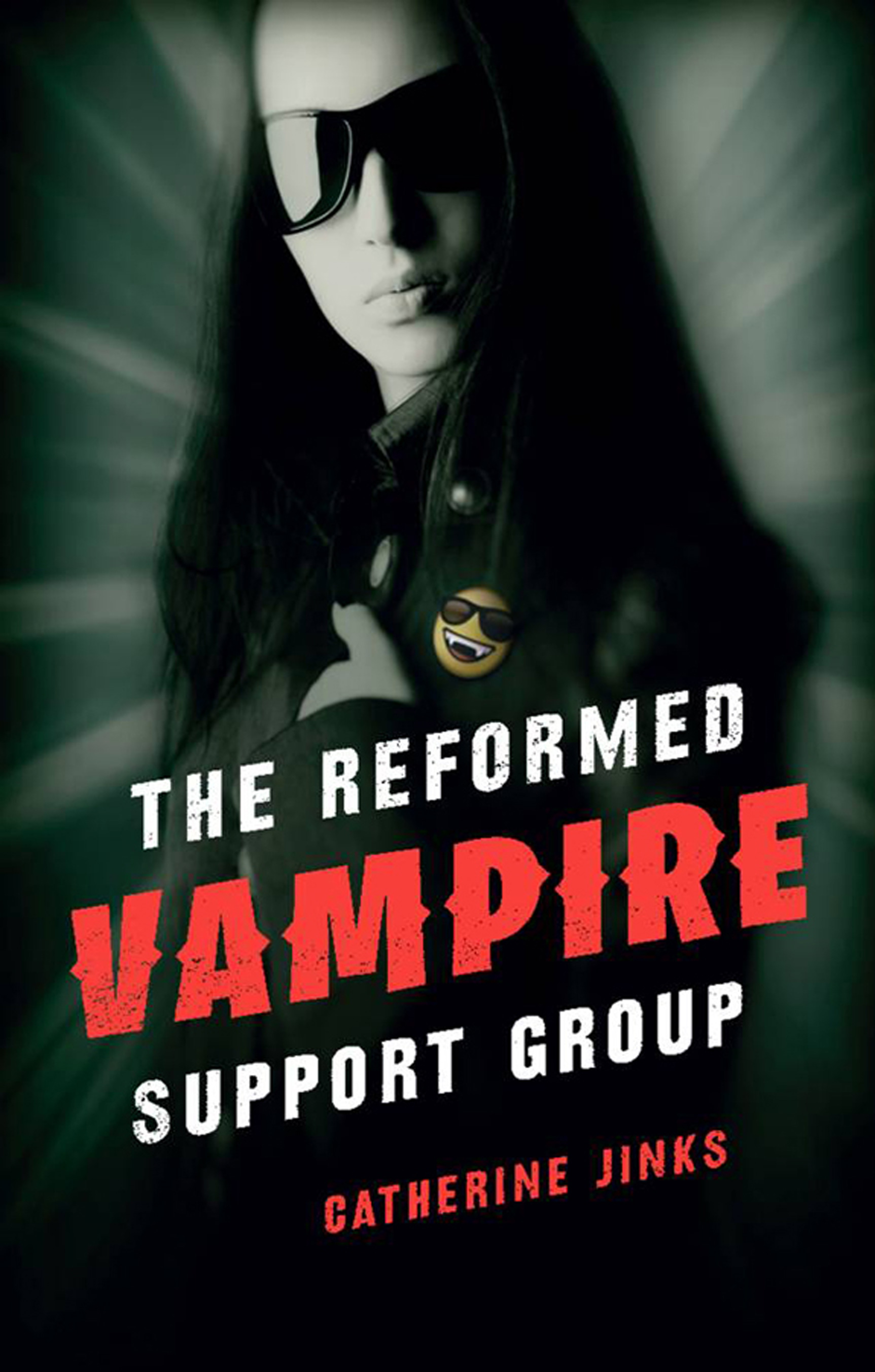